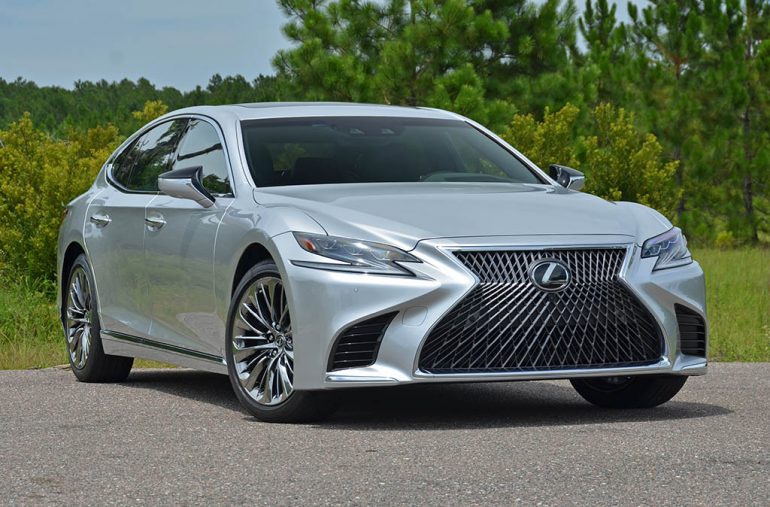 I can remember the time that the Lexus LS was first introduced to the automotive world where it was dubbed to be the “baby-Benz” to naturally shake things up when it comes to a full-sized luxury car. Not only did the Lexus LS shake things up but it pushed other automakers to remain on their A-game always keeping an eye on what the Japanese were conjuring up in their pursuit of perfection here in America. Having a good grasp on the segment for well over a couple decades, the latest LS takes many of its past merits and build upon them to birth a new powertrain approach yet retain the impeccable refinements and luxury appointments that today’s discerning buyer seeks.

The new 2018 Lexus LS is completely redesigned wearing the LS 500 badge signifying something different under its aluminum hood in the form of a twin-turbo V6 instead of the admirable V8 of past generations. The new engine, a 3.5-liter V6 with two turbos gets mated to a new 10-speed automatic transmission. Together, the engine and transmission work in harmony for a nearly seamless driving experience landing each gear in succession to hardly ever transmit unwanted jolts or gear-hunting. Upon full throttle inputs when cruising in the 10th gear, the transmission sorts things out beautifully to land in the proper gear for a relatively-quick downshift where the LS 500 surges forward with authority. Such authority is in part from the twin-turbo V6 engine’s healthy 416 horsepower at 6,000 rpm and 442 ft-lbs of torque that starts maxing out at just 1,600 rpm and slightly beyond. 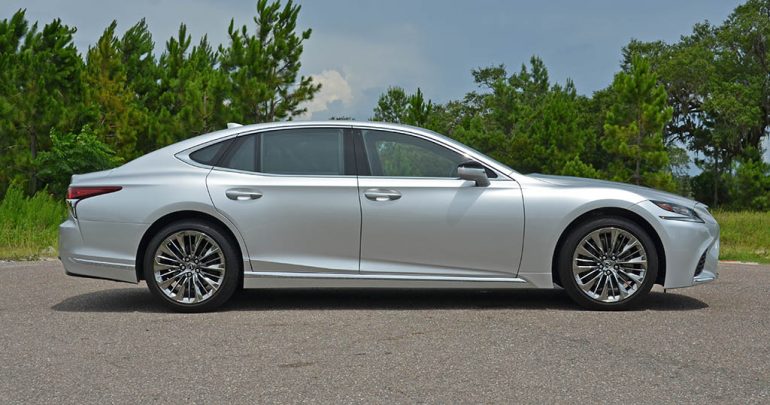 Looking at the new 2018 Lexus LS 500 through the lens of German luxury buyers one would easily conclude that Lexus has aced its homework to improve upon the overall driving dynamics of such a large vehicle that tips the scale in at just over 4,700 pounds. The new LS 500 in its standard rear-wheel-drive and non-F-Sport flavor does just fine to keep the body composed and never sloppy. In all, the composure from the adaptive dampers and optional air suspension system proved to be sportier than the LS has ever been – which is right where such a vehicle needs to be if you ever wondered. The adaptive dampers react fast in every drive mode (Eco, Comfort, Normal, Sport, Sport+, and Customize) to prevent body bounce going over lumps in the road. The suppleness of the suspension never gives away to unwanted body motions even when slightly pushed hard through turns, under hard braking, and during full throttle acceleration if you ever need to reach 60 mph in the 5.3 seconds that the RWD LS takes. If you’re taking note, that’s about 0.3 seconds faster than the V8’s best time. Moreover, lateral handling has improved when you start to crunch the numbers averaging 0.85g for the RWD model and 0.86g for the all-wheel-drive LS on the skidpad. Despite the performance improvements, Lexus has managed to improve upon the ride quality, which when moved more to the sport side of things doesn’t always translate into a smooth ride – but does with this new LS. The LS 500 soaks up bumps, rough road surfaces, and keeps the cabin sometimes eerily quiet thanks to cleverly placed sound dampening along with acoustic door windows up front and two out back making up a unique 6-window design. The optional Mark Levinson sound system with 23-speakers aides with active noise cancelation and keeps your ears titillated from the rich sound from many dimensions within the airy and accommodating cabin. 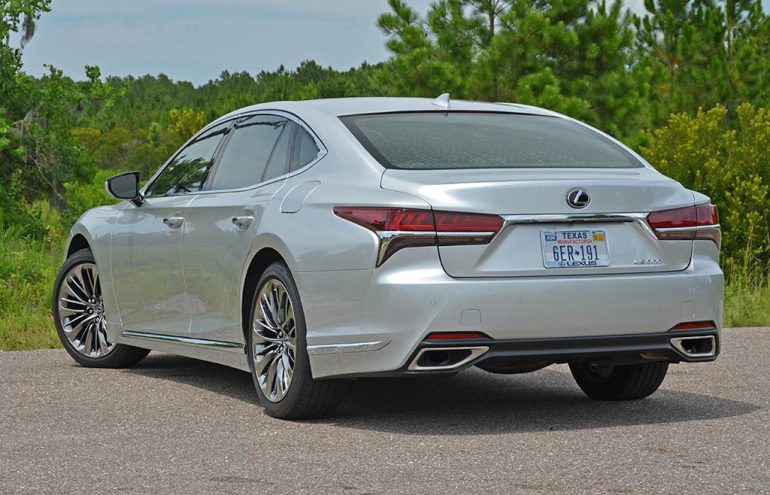 Most of what I experienced in the new Lexus LS 500 during my long highway drive for a week-long summer vacation trip was delightful. The vehicle performed better than expected, in addition to the fuel mileage – walking away with a respectable average of 29.5 mpg with mostly highway driving slightly above the posted speed limit. The EPA estimates for the LS 500 RWD come in at 19 mpg city, 30 mpg highway, and 23 mpg combined. Funny enough, I never saw anything lower than 22.2 mpg displayed on the new color LCD gauge cluster that somewhat mimics the gauge design of famous LFA supercar and many of the other F and F-Sport variations within the Lexus line of vehicles. 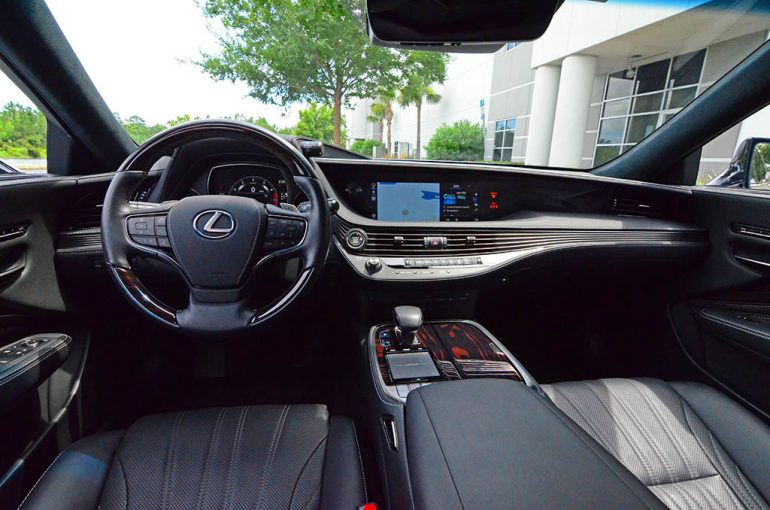 The interior of the new LS 500 picks up off its sibling, the Lexus LC 500 coupe. Most of the design inspiration through the cabin is a page taken from the LC, which is a good thing considering some of the LC’s roots being derived from the LFA supercar. The attention to detail in the impeccable fit and finish of the LS 500’s interior exudes what Lexus brand is known for, apart from its historically remarkable reliability. Materials used throughout the interior are high quality leaving hardly any stones unturned for a top-tier full-sized luxury vehicle. Even the door panels have the availability of KrikoGlass trim to pay homage to Japanese culture – another elegant touch to the cabin of the finest Japanese luxury vehicle around. The seats in my LS 500 RWD test vehicle equipped with the optional Executive Package feature 28-way adjustable massaging seats with ventilation and heating up front, and 22-way power adjustable reclining rear seats with massage, heating, and ventilation out back. The right-rear seat for the Executive Package features an ottoman and Shiatsu massage program, which are all controlled through a user-friendly rear-center console 7-inch color LCD touchscreen. 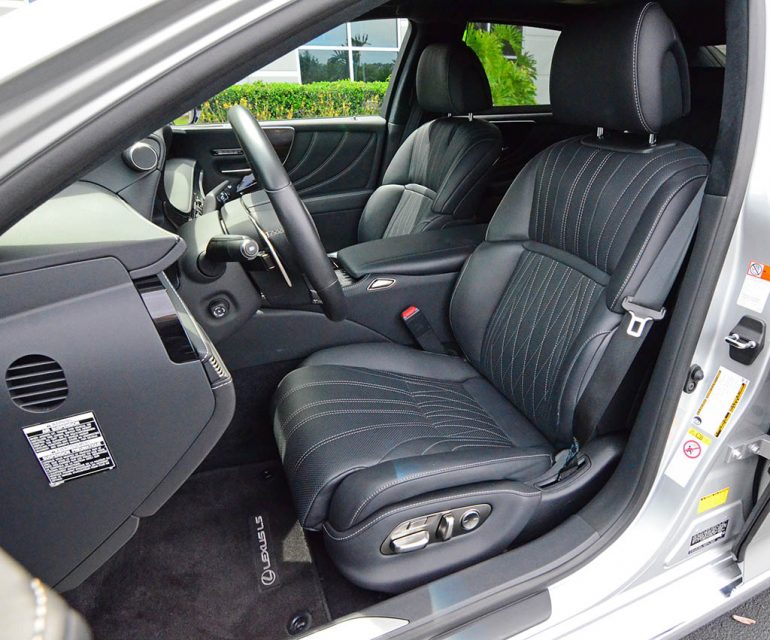 Utilizing the advancements of today’s technology, the new LS 500 not only pampers passengers with multifunction massage seats that are among the best and most effective I have experienced in a vehicle, Lexus adapts many integrations of an automated control system with a Concierge feature that automatically controls the seat temperatures and the automatic 4-zone climate control system. Furthering the tech, the latest iteration of Lexus’ infotainment system attempts to pull off a user-friendliness feat but stumbles with the Remote Touch Interface that often takes attention from the road to control the system. For the most part, the Remote Touch Interface works well but continues to be the least enjoyed part of new Lexus vehicles in my opinion. I found that using the system while driving was difficult and sometimes I was thankful for the lane departure and mitigation system kicking in keep the large LS 500 inside of the painted lines of my lane. Yes, the Remote Touch is just that intrusive and distracting. It’s possible that Lexus could retain much of their infotainment system’s otherwise nifty menu sets but find a better control method and combine it with the offering of a touchscreen interface instead of being limited to a cumbersome touchpad with an unwelcoming force-feedback. Moreover, the lack of Apple CarPlay and Android auto doesn’t do the infotainment system any justice. However, I’ve been told that Lexus will be rolling out Apple CarPlay and Android Auto in September of this year, which will only improve the perception of their otherwise awkward infotainment system. 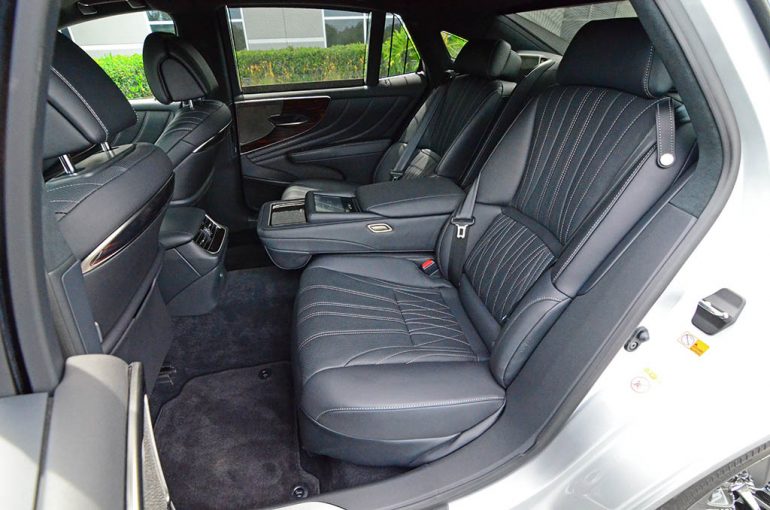 As expected, there is a bevy of active safety features blanketing the new LS 500 that nearly makes it almost impossible to run into objects, cars, or detected pedestrians. I found that the pedestrian detection that is often limited to the front of the vehicle for most luxury vehicles but with the LS the detection also applies to the rear of the vehicle where it would seldom slam on brakes when a person was detected walking by near the rear when I was backing into a parking spot. The 360-degree ‘Panoramic view’ camera system comes to the aid to not only view “around” the vehicle but you can also take a live view of the vehicle in a virtual representation that looks as if a drone is circling to give you a real-world representation of what surrounds your LS. One of the more clever features is the rather large 24-inch color heads-up display, which can be used to view an array of vehicle information in addition to front cross traffic arrows to alert you of vehicles crossing your path when you’re at an intersection. 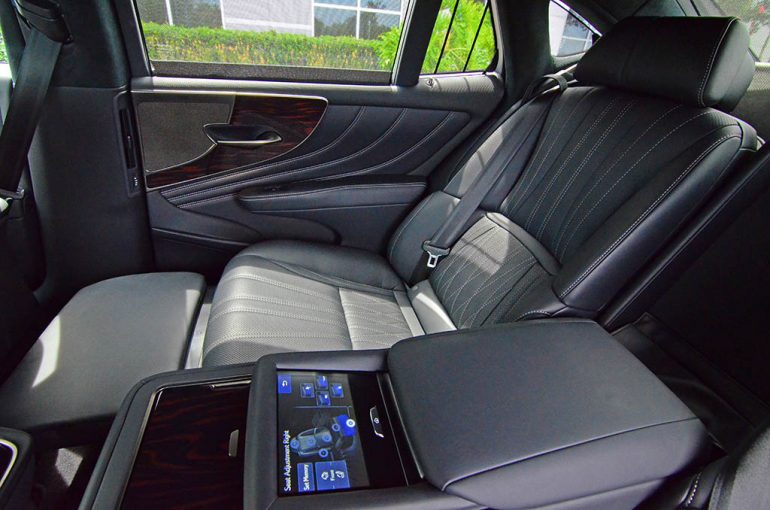 As I have mentioned before in many of my Toyota and Lexus reviews, the brand conglomerate has continued a methodical approach to embody old established principles, advanced tech, impeccable build quality, added performance, and bold styling to signify a new brand cachet for the luxury market. The new LS 500 is exemplary of just that. Not to mention, the price of a new Lexus LS 500 still undercuts its German competition but can rise quickly upon the addition of desirable high-tech luxury features, such as those found in my Executive Packaged LS 500 test vehicle with an as-tested price estimated at $105,000. The new 2018 Lexus LS 500 starts at $75,000 for the rear-wheel-drive model, $78,220 for the all-wheel-drive model, $81,000 for the LS 500 F-Sport RWD, and $84,200 for the LS 500 F-Sport All-wheel-drive model. An LS 500h hybrid model, which has less power (354-hp) and gets an estimated 33 mpg on the highway, is available starting at $79,510 for the rear-wheel-drive configuration and $82,730 for the all-wheel-drive model. 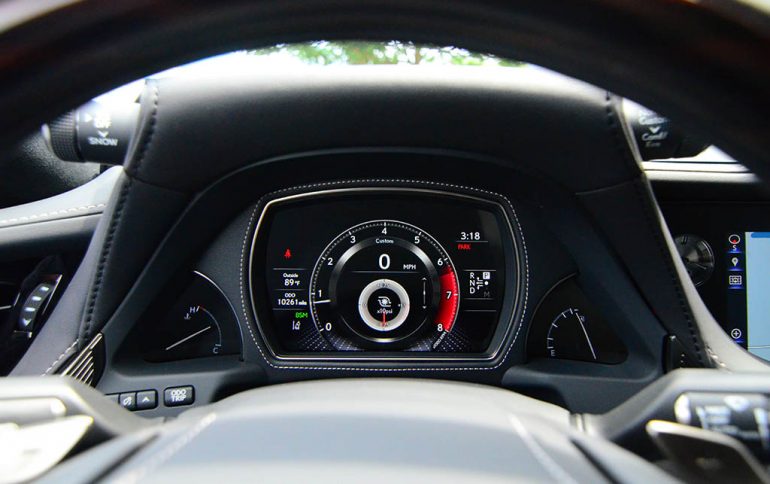