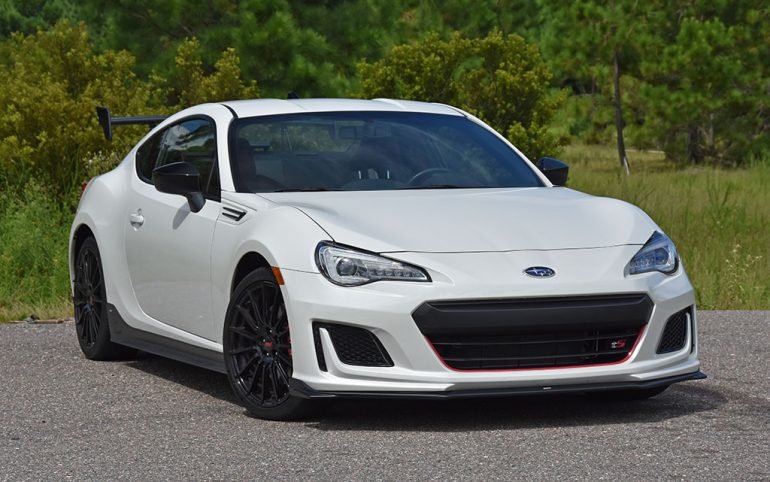 Strangely enough, automotive manufacturers attempt to oversell themselves by sometimes providing consumers with something they didn’t exactly ask to get. Case in point, my week-long experience with the 2018 Subaru BRZ tS, a variation of the rear-wheel-drive compact sports coupe that enthusiast praise on having a back-to-basics platform permitting relatively safe fun and hooked-on-rails performance.

The Subaru BRZ has always been a respected vehicle in its quest to outhandle vehicles that hit well above its class and price point. As a fun-to-drive rear-wheel-drive sports car that can be had with a manual transmission, the BRZ is unique and a rarity in today’s tech-laced and crossover-derived world. 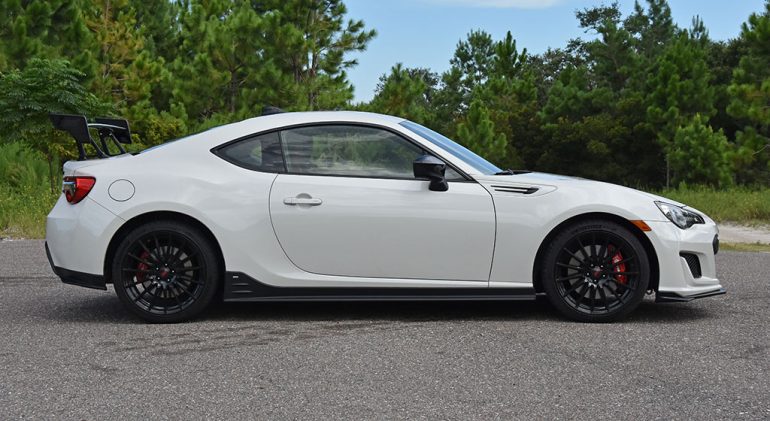 Tinkering with the BRZ’s formula, one that was already the best handling car you can buy for the money, Subaru thought it was wise to take the BRZ’s dynamics and enhance them with their STi tuning. Out comes the BRZ tS, a vehicle that takes the already-good handling attributes and makes them even better with stickier tires, revised suspension, a massive carbon fiber wing, and Brembo brakes with 4-piston calipers up front and 2-piston rears. 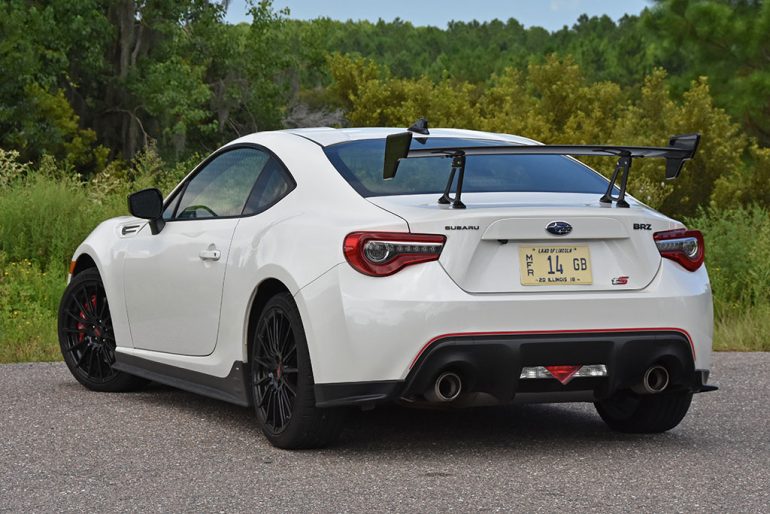 The Subaru BRZ tS is fundamentally a move to build upon the basics of a rear-wheel-drive sports car for a newfound ‘improved’ foundation. Though, with such a new foundation, one that gives us something we didn’t exactly ask for, the BRZ tS continues to beg for more power. Making due with the same happy-to-rev 4-cylinder boxer (horizontally opposed) engine with 205 horsepower and 156 lb-ft of torque, the BRZ tS doesn’t exactly give us a complete sports car package in today’s scope. For as long as the BRZ and its closely-matched Toyota 86 (previously Scion FR-S) sibling have been in existence, enthusiasts have begged and pleaded for a more powerful variant. Unfortunately, Subaru thought it was best to offer up something that the BRZ didn’t exactly need, and that was more handling. The normal BRZ was just fine with its low center of gravity, among the lowest in the industry, and hooked-on-rails dynamics. 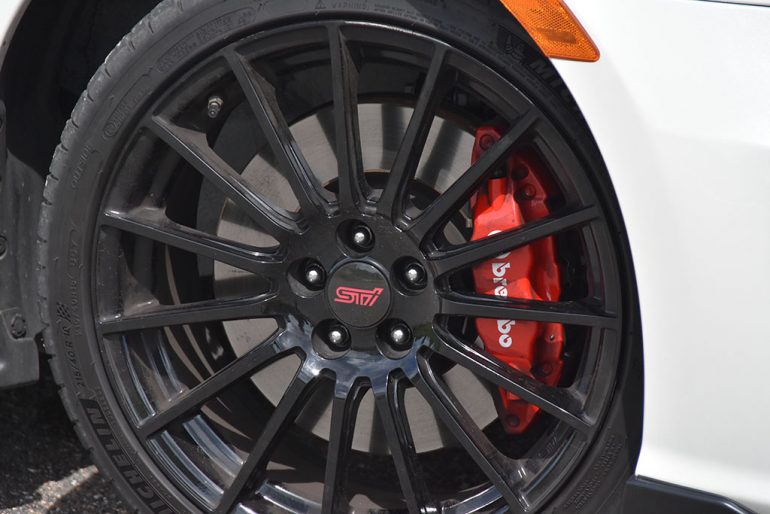 The takeaway from the BRZ tS is that Subaru committed to do “something” to the BRZ to attract some much-needed attention but didn’t fully execute on what enthusiasts wanted in such a well-deserved platform. However, I won’t go as far as to say the BRZ tS is a disaster in any way – it’s far from it. After all, the BRZ tS does improve handling and there is more of a raw road-feeling that you get from a rather stable and firmly planted chassis – something that’s missing from many sports cars that cost two or three times as much as the BRZ tS. The use of Michelin Pilot Sport 4 (PS4) tires wrapping larger 18-inch wheels is a welcomed change for the BRZ as is the new look of the tS. The newfound stiffness from the chassis with the STI front strut bar and lower crossmember brace isn’t overly harsh thanks to the SACHS shocks that provide a decent ride quality and react well to keeping the BRZ tS level and poised when pushed around turns and bends. The Brembo brakes do a good job to slow the BRZ tS to a stop but still require a bit of extra foot pressure just as the standard braking system did in my many previous tests of the BRZ. Overall, despite the overlook of adding any power, the BRZ tS is a remarkable package for those who want to master their local autocross course. I’m not sure anything can touch it on a course that’s void of any long straights, other than a trick Mazda MX-5 Miata, the BRZ’s closest-matched nemesis. 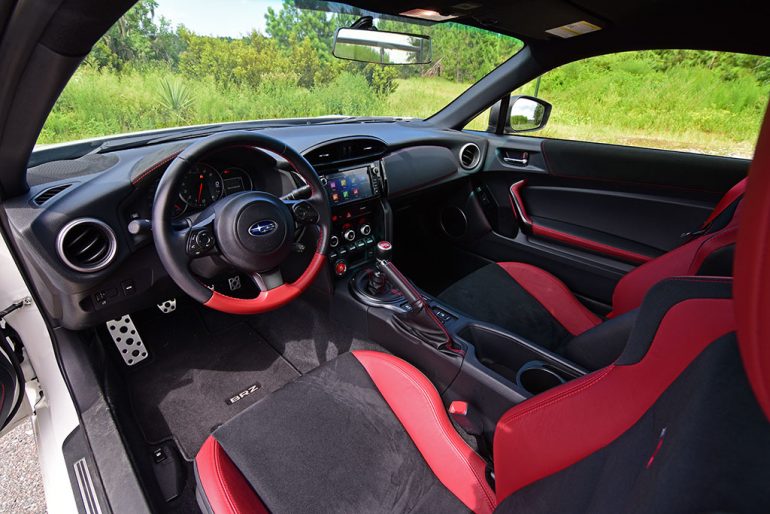 The rest of the BRZ tS’ package adds subtle flair to make it stand out in a crowd, apart from the massively sized carbon fiber wing that makes the BRZ tS look as if its ready for flight. Inside, the BRZ tS is much of what I remember from countless encounters of the BRZ in both its Premium and Limited trim levels but with the addition of red bolsters on the Alcantara front seats and accent stitching throughout the cabin.

Thankfully, for enthusiasts, the BRZ tS only comes with a 6-speed manual transmission. Even with the manual transmission, larger wheels and tires, and massive drag and downforce-inducing wing, fuel economy only suffers slightly with an EPA-estimated 20 mpg city, 27 mpg highway, and 23 mpg combined. 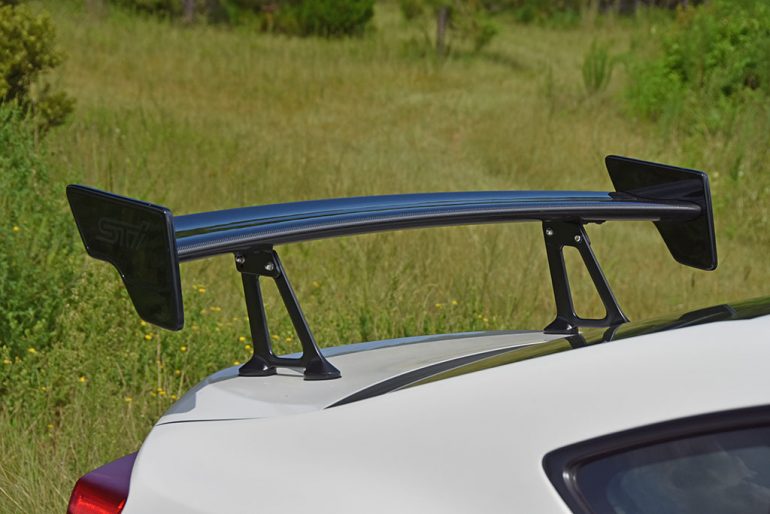 In a way, you can think of the new BRZ tS picking up ever-so-slightly where the limited-run Series.Yellow and Series.Blue trims left off but with a twist by way of more handling. Speaking of limited, that’s just what the BRZ tS is – on power – I mean, on its limited production run of only 500 examples slated for U.S. Subaru dealerships. The 2018 Subaru BRZ tS doesn’t have any options or option packages and gets a set price of $33,495 plus destination and other dealer add-on fees. Possibly, the exclusivity of the BRZ tS along with its exceptional handling will attract a crowd, one small enough that dealerships only have to worry about collectively moving a total of only 500 of the unique sports cars. I suppose it’s one last hurrah before the BRZ meets its demise – or gets a major power ‘boost’.