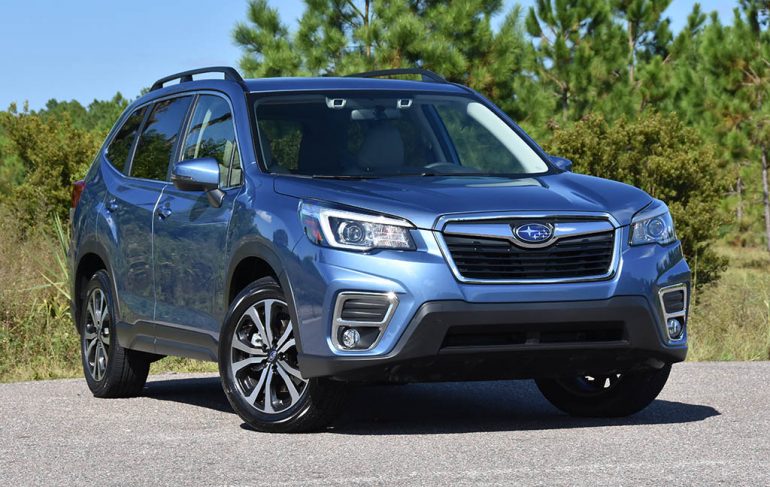 In recent months, I find myself enjoying simpler things, in addition to getting a more basic mode of transportation for my weekly test drive review vehicle. Many times, I could count on Subaru being the choice brand for simple modes of transportation, and in my recent week with the newly redesigned Subaru Forester, much of that notion rings true with the exception of the new Forester receiving many welcomed refinements and advancements in safety tech.

>> Get the best price on the Subaru Forester from a network of local dealers now. <<

The new 2019 Subaru Forester is redesigned for the model year with a bump in power output from its reworked 2.5-liter flat four-cylinder engine, which is now the only engine choice for the lineup departing from the 2.0-liter turbocharged engine choice. Moreover, all new 2019 Forester models get Subaru’s EyeSight system standard on all models. 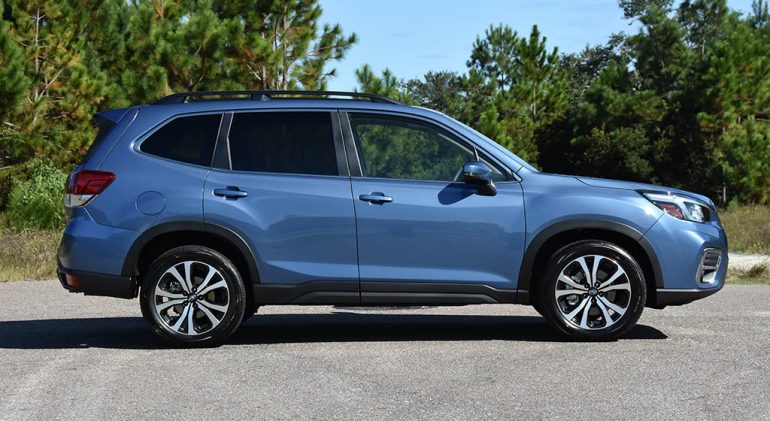 For the 2019 model year, the Subaru Forester doesn’t depart from its basic formula in giving its dedicated consumer base a reliable crossover with generous cargo room, standard all-wheel-drive, plenty of ground clearance, and a bevy of active safety features. What I most noticed about the new 2019 Forester is that is more refined than the outgoing generation with more soft-touch surfaces throughout the dashboard and slightly below the beltline on the door trim areas. Additionally, the ride quality is improved along with the Forester’s ability to still serve as an off-roader for light duty tasks benefiting from a high ground clearance of 8.7 inches and an electronically-controlled off-roading dual-setting X-MODE system with hill descent control. 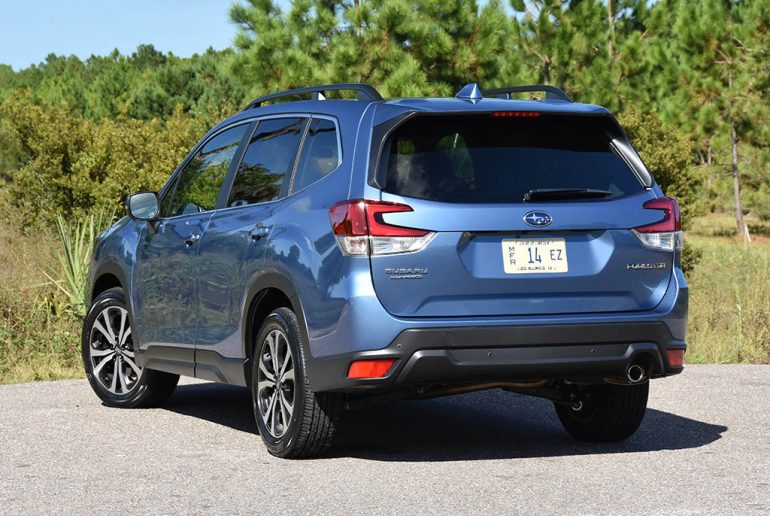 Power from the Forester’s 2.5-liter boxer engine is increased to yield a total of 182 horsepower at 5,800 rpm and 176 lb-ft of torque maxing out at 4,400 rpm. The flat-4-cylinder engine gets mated to a Lineartronic CVT (Continuously Variable Transmission), which is the only transmission choice for the new Forester. The combination of the engine and transmission often don’t seem to work in harmony as the overall acceleration of the Forester is lackluster and only slowly builds as the engine buzzes along at its midrange into the upper RPM range. Hardly ever does the CVT allow the engine to get to its redline until things get moving to about 25 to 35 mph, which at such a time you’ve already lost the race to best the 0 to 60 mph time of just over 8 seconds, which is only slightly better than the previous generation Forester with the 2.5-liter engine. In all, the CVT is somewhat slower to “shift” ratios to allow the engine to spin quickly up to its peak power RPM. 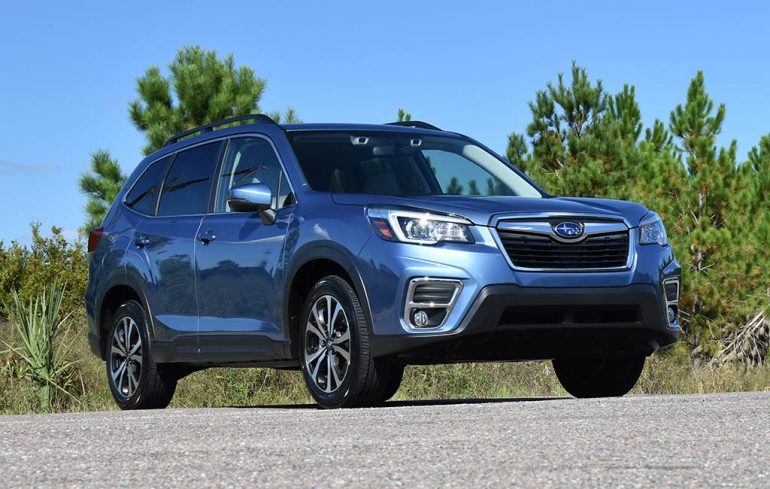 Driving the new 2019 Forester is an uninspiring endeavor. However, there’s an added softness and refinement throughout the drivetrain and overall feel of the new Forester. Such a feeling is welcomed after my past run-ins with older generation Foresters feeling somewhat cheap with an abundance of hard plastics and a cabin that falls short of being livable on a long trip. Speaking of trips, the new Forester improves upon its fuel consumption partly thanks to a new start-stop system that can be temporarily disabled. EPA estimates for the 2019 Forester Limited come in with respectable numbers at 26 mpg city, 33 mpg highway, and 29 mpg combined. 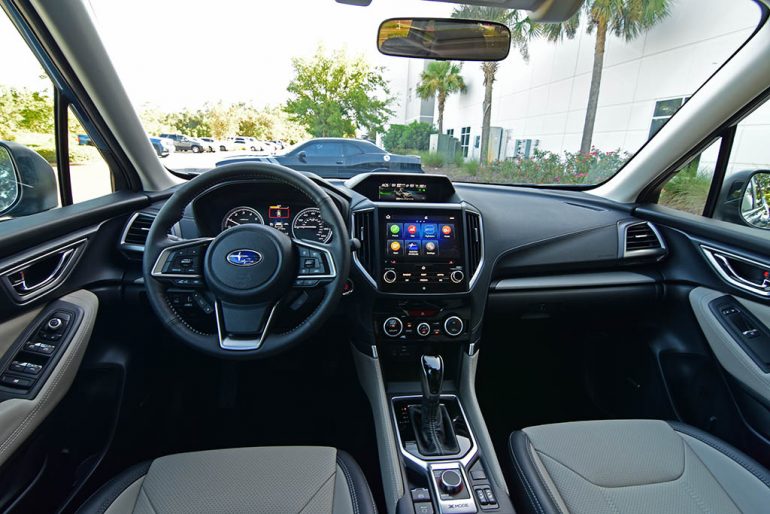 The new Forester’s interior is re-sculpted to make better use of space and the dashboard ergonomics. The latest infotainment system on my Limited trimmed test vehicle fed through a large 8-inch color touchscreen features Apple CarPlay and Android Auto integration. Additionally, the Forester gets the availability of an LTE high-speed Wi-Fi hotspot service. The new exceptionally responsive infotainment system is easy to use and ‘navigate’ with straightforward menus and screen options. 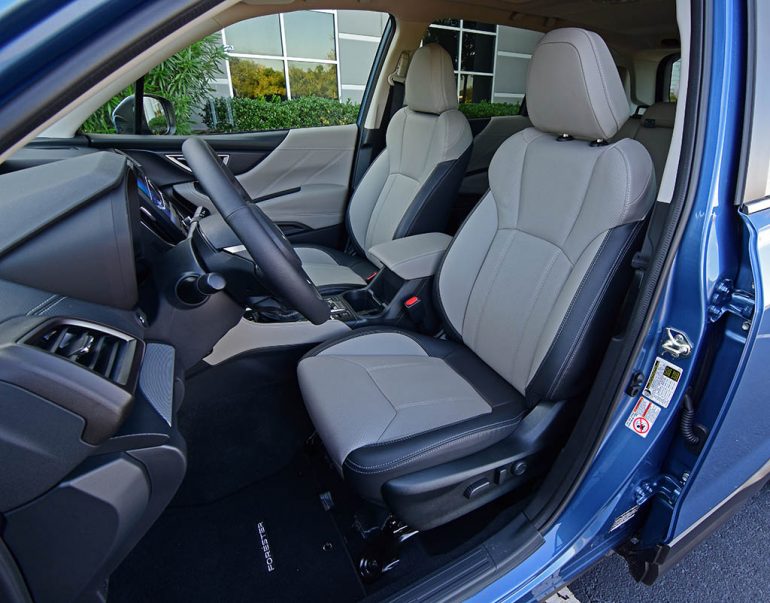 Other use of today’s tech filters down into LED lighting, a two-mode SI-DRIVE mode (sport and intelligent), reverse automatic braking, lane departure warning/mitigation, and Subaru’s latest standard EyeSight Driver Assist system, which continually monitors the road and will enact the automatic braking system if it detects an imminent collision with a vehicle or pedestrian. Moreover, the DriverFocus distraction mitigation system, which is a segment-exclusive feature to the Forester, will identify symptoms of driver fatigue or distraction and initiate a warning when necessary. 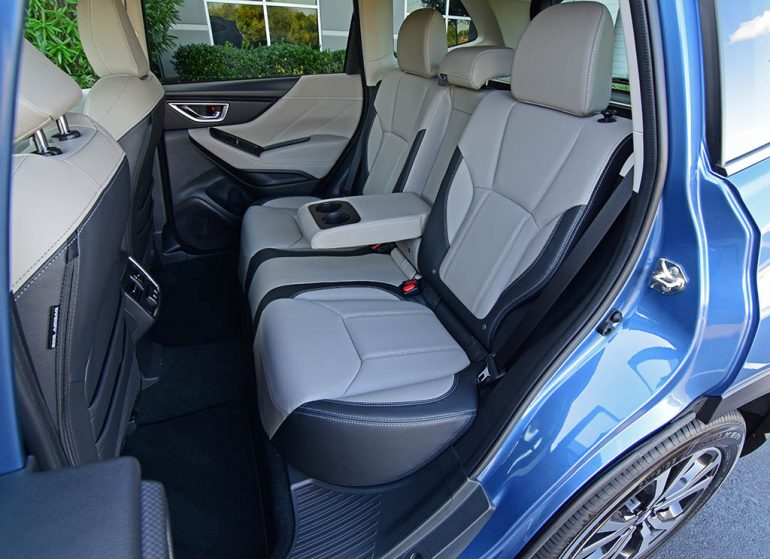 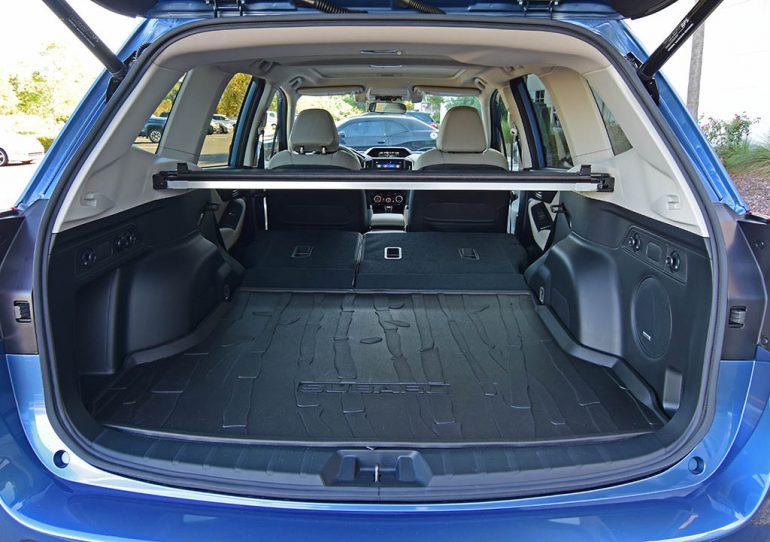 Subaru’s quest to keeping their dedicated following happy will continue a steady path with the new 2019 Forester without disappointment. The price point of the Forester also keeps on an expected path of affordability with a starting price of just $24,295 for the base trim and $34,495 as-tested for my Limited trim test vehicle, which includes a $1,695 option package and $975 destination & delivery charge.

>> Get the best price on the Subaru Forester from a network of local dealers now. <<