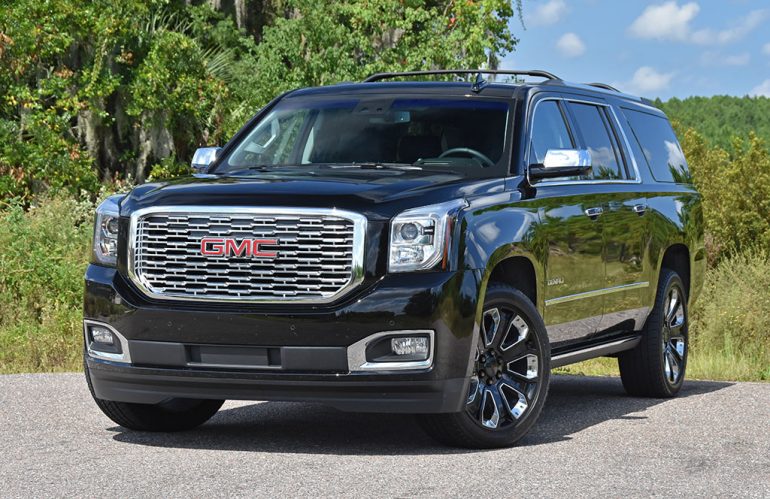 >> Get the best price on the GMC Yukon from a network of local dealers now. <<

Continuing a path to keep the GMC Yukon fresh and up-to-date, the 2018 model year received a welcomed 10-speed automatic transmission paired with the proven 6.2-liter V8 engine that still produces a healthy 420 horsepower and 460 ft-lbs. of torque. In my 2019 Yukon XL Denali test vehicle, I took notice of the improved performance over previous Yukon vehicles from years ago using the same engine. The new 10-speed automatic, a depart from the old 6-speed and 8-speed automatics of the past, proves to be just what the Yukon Denali needed to return some civility in its fuel consumption and balance of performance and towing power. The 10-speed proves to be one of my liked traits of the Yukon XL Denali in being one of the largest SUVs on the market. 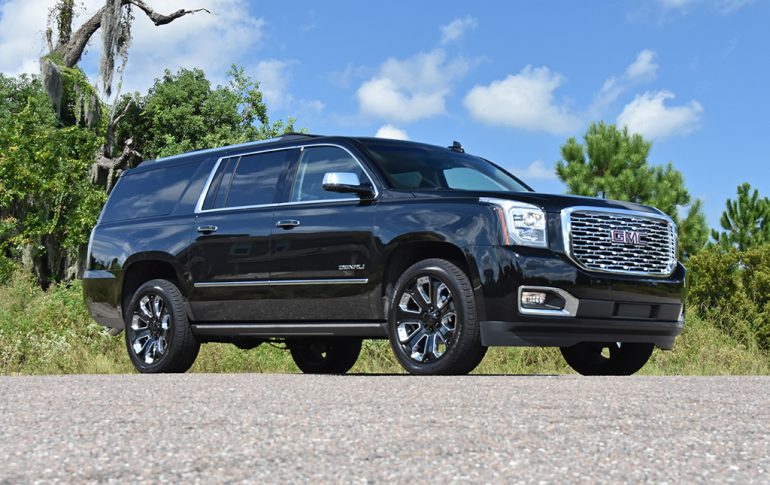 Having the optional four-wheel-drive system setup and placing it in the Auto setting gives driver’s the confidence of having all four wheels being powered without the hassle of the 4-high setting locking the differential making it difficult to turn. Though, having the 4WD Yukon XL Denali with the 6.2-liter V8 engine will return consistent but lackluster fuel consumption numbers nearly matching the EPA-estimates of 14 mpg city, 20 mpg highway, and 16 mpg combined. The benifit in the Yukon XL Denali is having a 31 gallon tank for a long range but at the cost of about $100 per tank of the suggested premium fuel for maximum performance. 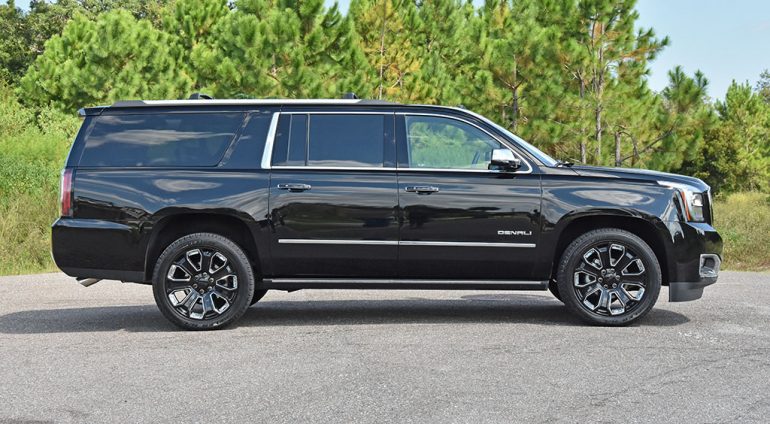 The sheer size of the GMC Yukon XL Denali with its extended wheelbase and cavernous cargo room demands some tech and innovative thinking to keep things civil on the road, and that’s just what GMC offers. The use of GM’s latest magnetic ride control by way of magnetorheological dampers, or magnetic dampers, proves to be the factor that gives the Yukon XL Denali a decent ride quality. Even though the initial onset of the ride is somewhat stiff, the adaptive magnetic dampers continually adjust reacting instantly to road bumps, uneven surfaces, and even rough roads to keep the massively-sized body of the Yukon XL Denali composed and somewhat smooth. Moreover, the jiggly body motions of past have been calmed with the best use of the latest body-on-chassis mounts and bushings. 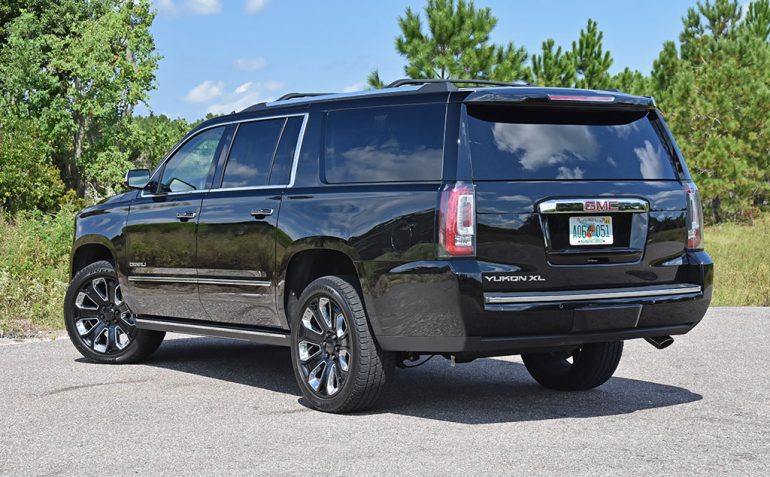 Combining the agreeable trick suspension controlled by computers, the Yukon XL Denali rarely feels out of control as one would think in such a big body-on-frame SUV. The way in which the Yukon drives is relatively easy and helps to have the top-end Denali trim’s active safety features and convinces such as the low-speed automatic braking, cross traffic alert, and front/rear parking alert sensors. The wide-angle rearview camera also comes to the aide for backing the large-and-in-charge Yukon XL Denali as do the active safety features of lane departure warning, lane keep assist, forward collision warning with automatic braking, and blind spot monitors. 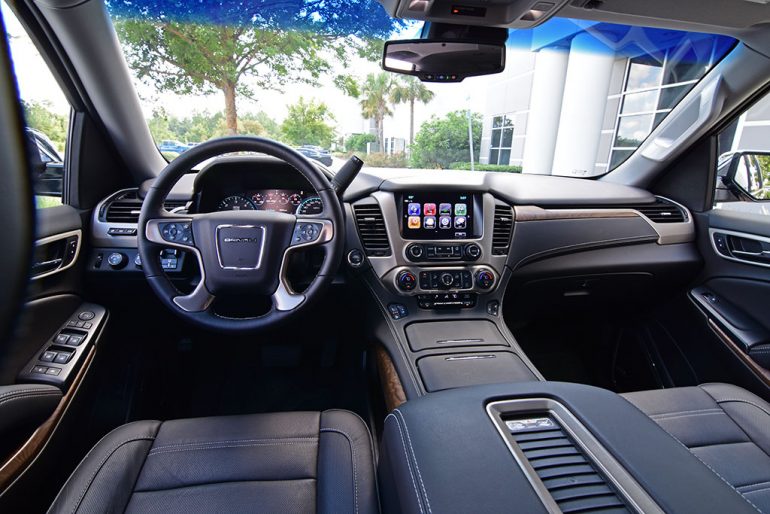 The interior of the new GMC Yukon XL Denali has well appointed with several soft-touch areas, dashboard, and attractive accent stitching throughout. The latest iteration of the touch-screen infotainment system retains its welcomed straightforwardness and ease of use, as does the added touch of Apple CarPlay and Android Auto integration based on your cellphone type. The wireless phone charging and Wi-Fi LTE hotspot come in handy as well. 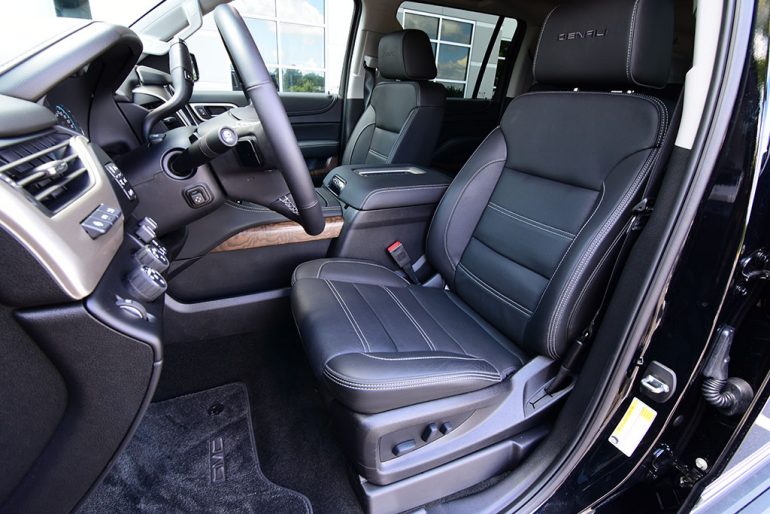 As the GMC Yukon XL Denali always has been, it permits having one of the largest cargo areas you can find. Accessed by a power hands-free liftgate, the rear cargo area gives you over 39 cubic feet of space and as much as 121.7 cubic feet when the second and third-row seats folded. Access to the seating areas is just as easy as it has always been with a pneumatic folding act of the second-row captain’s chairs in my test vehicle to permit three passengers in the third-row and two in the second row. Mind you, the Yukon in its base trims can be had to seat as many as 9 and tow about 7,500 pounds in the 4WD Denali trim. 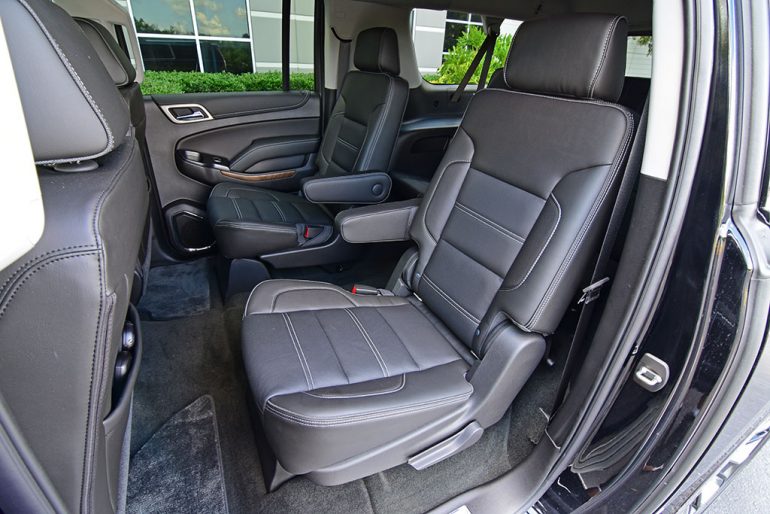 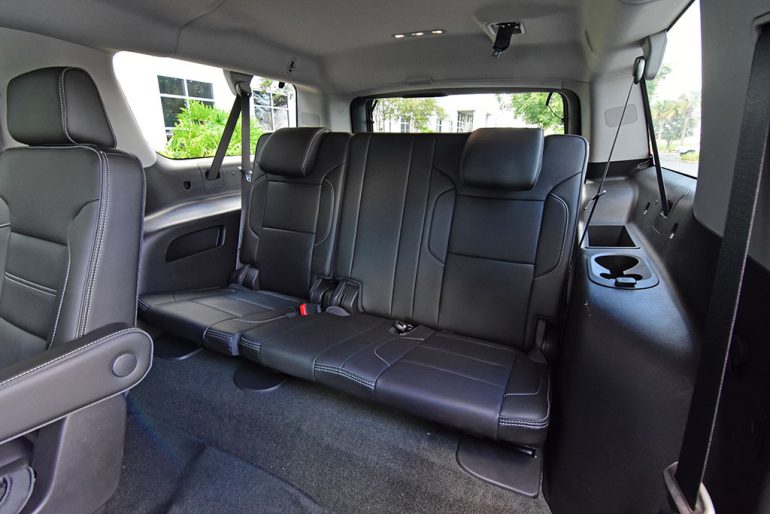 Many will argue that the GMC Yukon XL Denali is a better value for virtually the same vehicle as a decently-appointed Cadillac Escalade ESV. While some would be in their right in making such a comparison, there is something to be said about the experience that Cadillac offers over the GMC Yukon Denali with the addition of several features that simply cannot be had on similarly-built Yukon XL Denali. 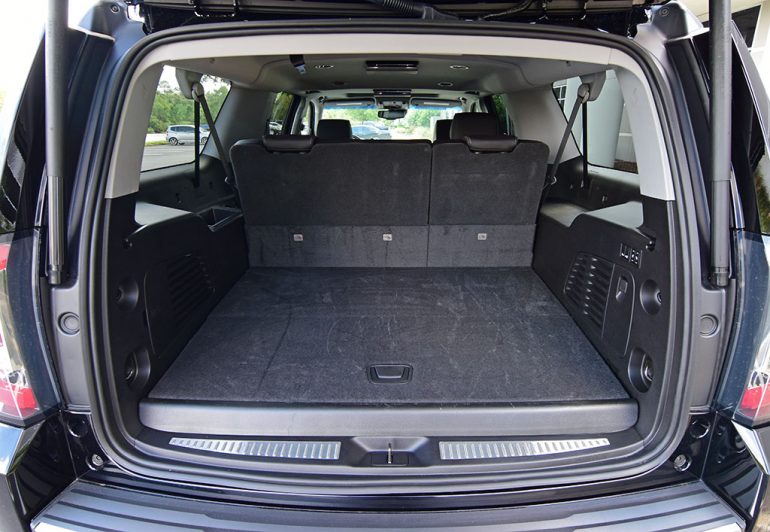 For the bottom line, the new 2019 GMC Yukon XL Denali is one of my favorites in the large body-on-frame SUV segment with a good value starting at a price of $72,300 and ending up at $81,940 for my fully-loaded test vehicle. 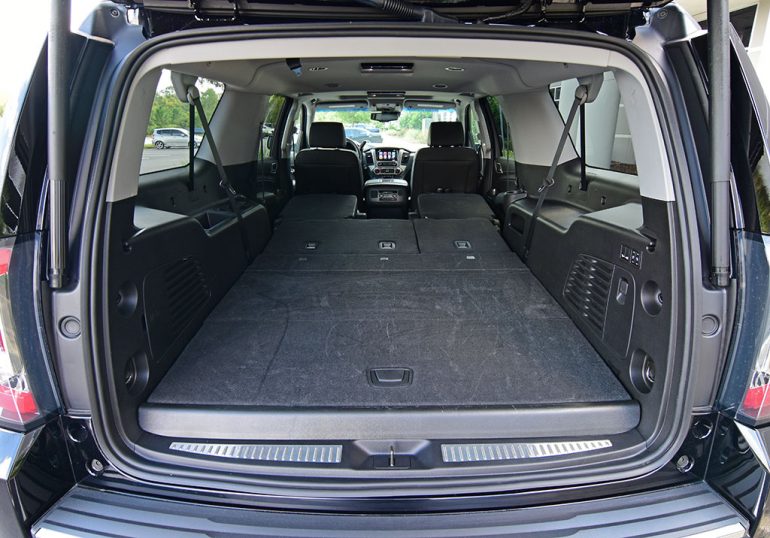 >> Get the best price on the GMC Yukon from a network of local dealers now. <<