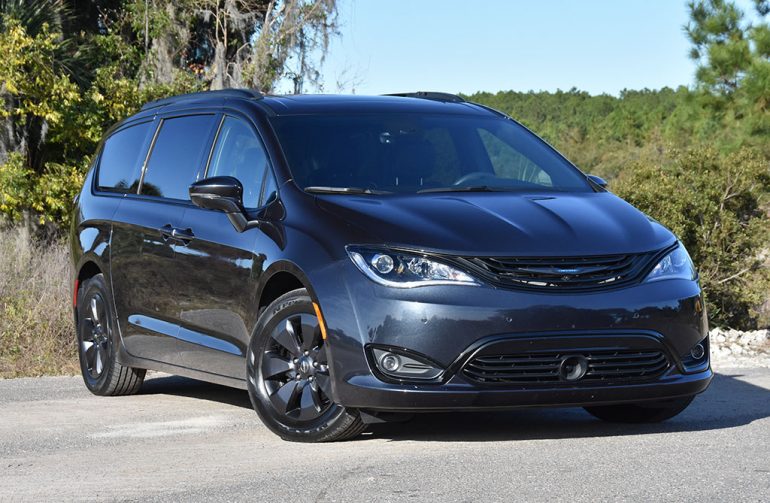 With many changes coming on the horizon in the automotive industry, we have hybrid vehicles to tide us over and ease the transition to full-on electric vehicles. While in such a transition, vehicles like the Chrysler Pacifica Hybrid are attractive offerings when the need arises to transport several passengers and a variety of “stuff” but do so with a conscious mind to fuel economy by the use of electric motors paired with a gasoline engine.

>> Get the best price on the Chrysler Pacifica from a network of local dealers now. <<

The Chrysler Pacifica Hybrid stands alone in its segmented world, currently being the only hybrid offering for a minivan. In that, Chrysler, the original innovators of the minivan, has built upon an excellent platform that ushered in the Pacifica nameplate in the formidable and unique minivan form in a current climate where SUV/crossovers are dominating American suburb garages. In the full spectrum of what the new Pacifica Hybrid offers is a rather convincing case that ultimately allows you to make commutes up to 33 miles just on electric power. That means that you can save on gas yet tote around your family, friends, crafty household stuff, and everything else that fits in the cavernous space that the Pacifica offers. 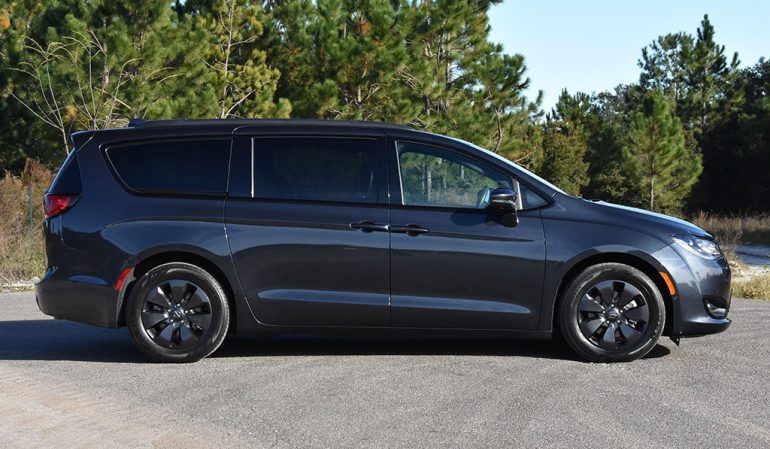 Plugin the Pacifica to your household outlet and get a full charge in just over 13 hours from a standard 120-volt outlet, or just 2 hours from a 240-volt Level 2 charger. From there, a 33-mile electric range is added to your gas range equating to a full range of just over 500 miles combined. That range is only good if you get the EPA-estimated 30-mpg figure for the Pacifica Hybrid, which is something that I seldom saw in my test drive experience over the course of a week. For the most part, 27 mpg was the figure that stuck to the multi-configurable center gauge cluster color screen. 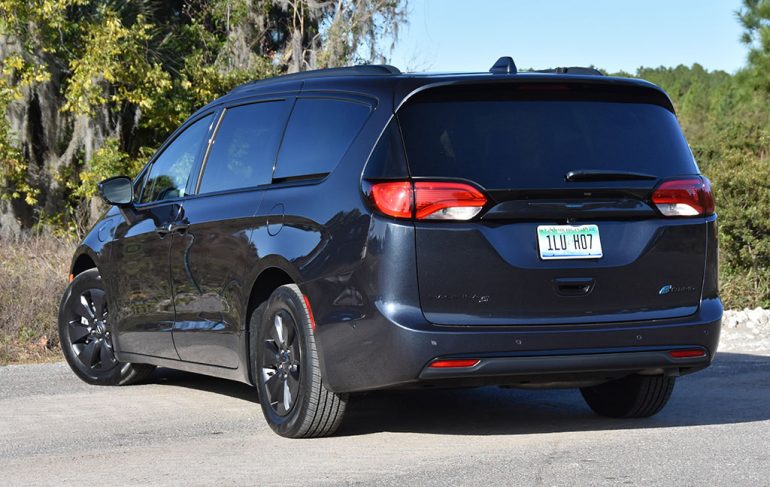 Driving the Pacifica was mostly a thoughtless act where the lack of any specific drive modes or hybrid settings left all of the power management up to the minivan’s computers. Having such a setup forced me into modulating the throttle at times to conserve energy and that’s just what the system does in its smart execution of power delivery to balance battery power and firing-up of the 3.6-liter V6 engine, which is mostly the same as found in the normal gas-powered Pacifica with the exception of the Hybrid’s gas-mill running on the Atkinson Cycle. Total power output is stated at 260 horsepower, slightly below the non-hybrid Pacifica. However, the instant torque from the dual electric motors in the Pacific Hybrid makes it feel livelier than the gas-powered version despite a slower speed to 60 mph taking about 7.8 seconds. I took delight in having the ample torque at my disposal, instantaneously, from virtually any speed. 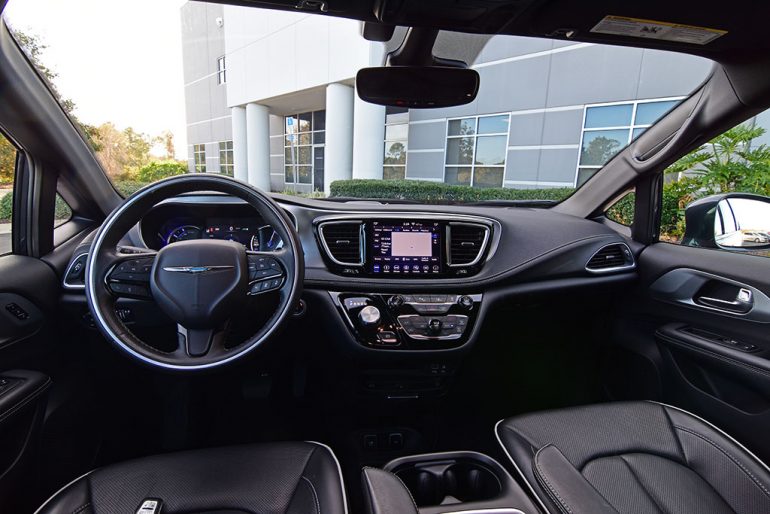 Power is sent to the front wheels through an Electronically variable-speed automatic transmission, somewhat like a CVT (Continuously Variable Transmission); only it combines two concentric rotors that are phased with the electric motor and gas engine. The unit works well to permit the use of the electric motor pairing with the gas engine when it is needed. The Pacific Hybrid is no slouch, and it will quickly spin the driver’s side wheel (there’s no limited-slip differential here) at speed when you lay into the throttle on somewhat loose or slippery surfaces.

The driving makeup of the Pacifica Hybrid doesn’t have many surprises, which is a good thing for those who don’t do anything outside of following posted speed limit signs. In all, the Pacifica Hybrid rides as you would expect a minivan to ride, but my test vehicle was mostly on the firmer side from suspension tuning that I suspect was firmed up to support the extra 500 pounds from the hybrid battery over the non-hybrid. 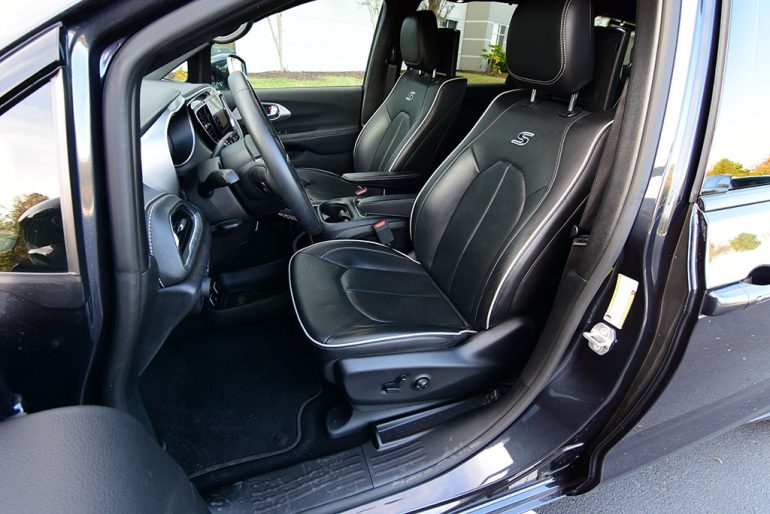 If you ever want to utilize all 33 miles of electric range, your throttle input is going to have to be soft and conscious of the gas engine kicking over when you demand near full throttle. It would have been nice to have a drive mode to preserve the electric charge for special driving situations, such as navigating slow-speed roads or traffic. Otherwise, the hybrid system does a good job at energy management, and the transitions from electric to the gas engine assisting is virtually seamless. Accelerating out of the hole is usually left to the electric motor initially with the assistance of the gas engine after a few seconds into moderate to hard acceleration. 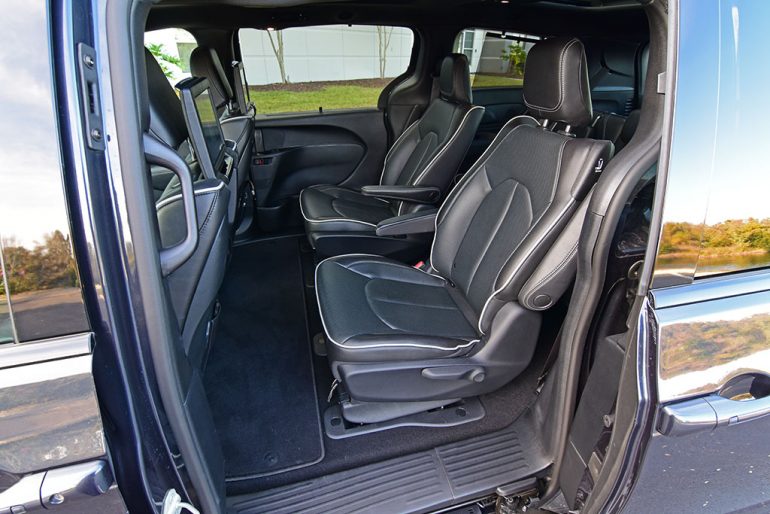 The cabin of the Pacifica Hybrid is mostly kept the same as its non-hybrid counterpart, with the exception of the second-row seats not being able to be folded down in the praised Stow-n-Go fashion. The hybrid battery takes up use of that space and leaves you with fixed captain’s chairs only with their sliding and reclining adjustments in my Pacifica Hybrid Limited test vehicle. 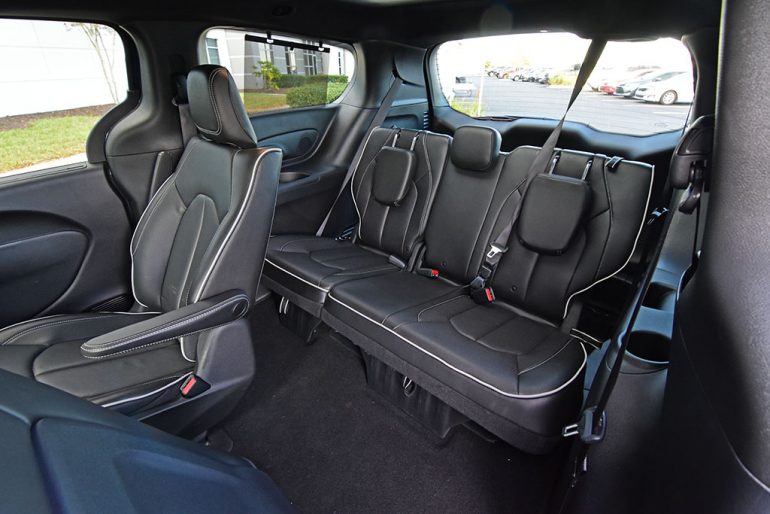 Completing the cabin and standing out in a coveted minivan segment is the Pacifica’s highly praised infotainment unit, the latest iteration of Chrysler’s Uconnect system, which touts easy use of its interface with quick response and simple integration of smartphone features, such as Apple CarPlay and Android Auto. 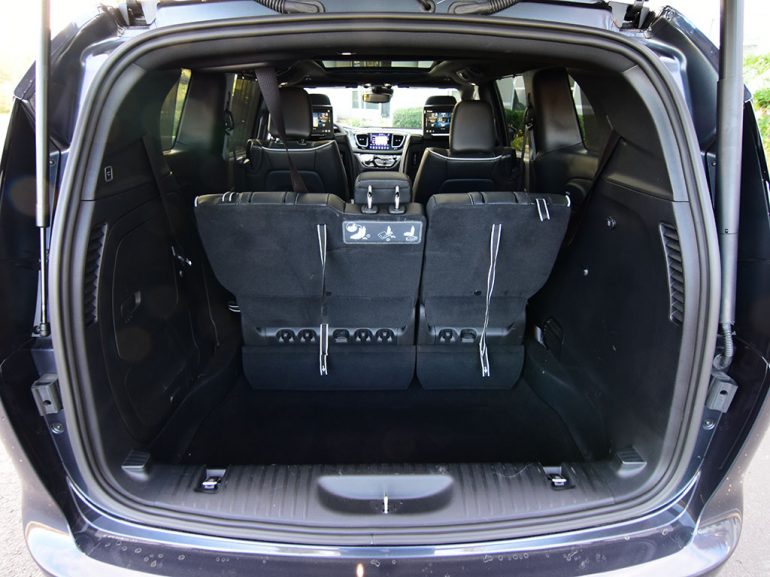 The Pacifica Hybrid Limited comes with a bevy of safety features, active and passive to virtually blanket the minivan with the expected group of helpers to either aid at keeping you in your lane, warn you of an impending collision, and even warn you visually and audibly of a vehicle in your blind spot if you signal in such a direction. 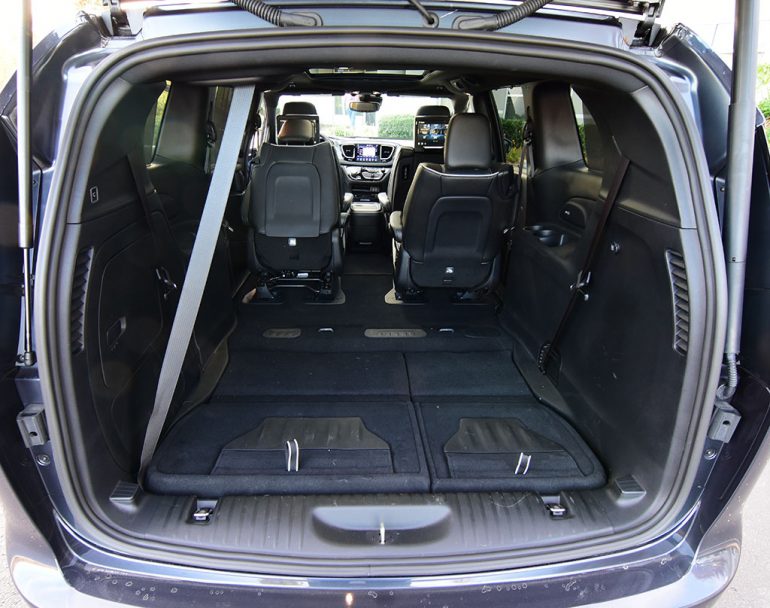 The many aspects of the Pacifica being a welcoming place for passengers shines brightly with its versatility and connectivity with a plethora of USB ports, HDMI ports for the rear-seat entertainment system, and plenty cubbies and compartments for everyone’s drinks and “stuff.” The pitfalls of the overall quality lie with subtle interior noises from the abundance of plastics throughout. There are plenty of soft-touch surfaces right where they need to be.

Hybrid vehicles have traditionally cost more than their non-hybrid counterparts. The new Pacifica Hybrid, however, is priced right with a loaded-up Pacific Limited non-hybrid. At the top end of the trim scale, my Pacifica Hybrid Limited test vehicle loaded up come at a price of $50,800, including a $1,495 destination charge. To quickly note, a non-hybrid Pacifica Limited loaded up will get more horsepower and more cargo capacity when folding the seats. Still, such a price is a hard pill to swallow, considering the vast field of comparable SUVs/crossovers currently on the market. But if a plug-in hybrid is what you desire, the Pacifica is one you don’t want to overlook.

>> Get the best price on the Chrysler Pacifica from a network of local dealers now. <<