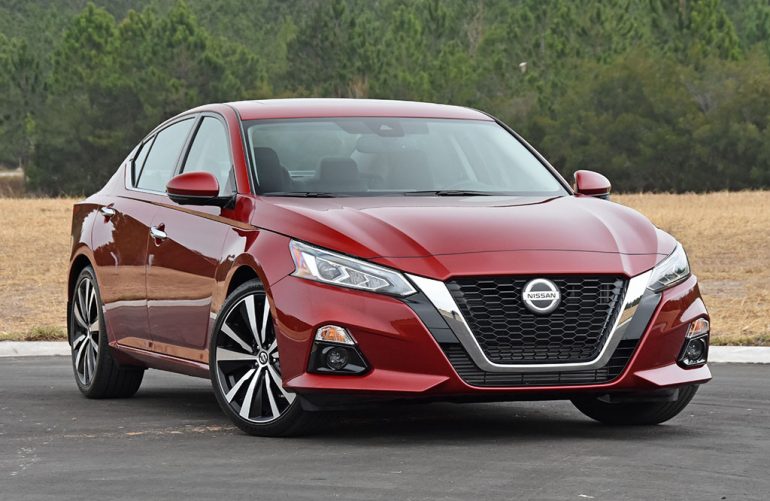 While it’s evident that sedans aren’t selling as they used to because SUV/Crossover utility vehicles are the go-to vehicles of today, there’s still a decent selection of mainstream sedans for the pickings. One in particular that has kept pace for its sales figures is the Nissan Altima. The Altima has always been a steady seller that the Nissan brand could count on, and in its latest model year, it proudly endures the influx of crossover vehicles and offers up a little something for those who haven’t quite yet made a move to an SUV or crossover.

For the 2020 model year, the Nissan Altima continues without much change other than memory seats for the Platinum trim, a change in the interior trim, and its full suite of driver aids is now standard equipment for the SR trim and an option on the base S trim. Otherwise, the welcomed new engine for last year’s model, the 2.0-liter variable compression (VC) turbocharged 4-cylinder, continues on to impress folks like me with its surprising balance of decent power output and fuel efficiency. 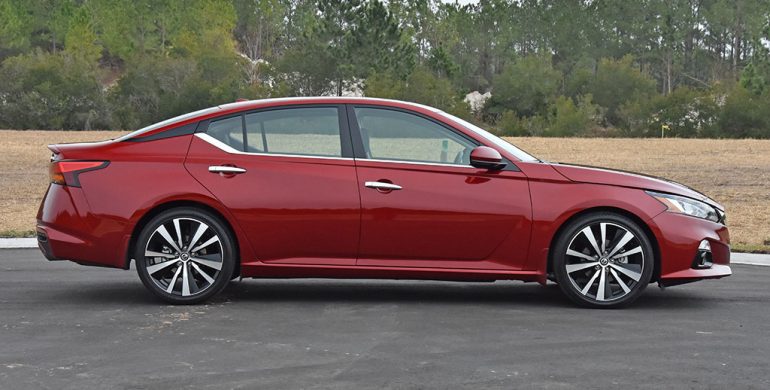 The two engines that power the new Altima remain to be either a 2.5-liter naturally-aspirated 4-cylinder with 188 horsepower and 180 lb-ft of torque, or the welcomed variable compression turbocharged 2.0-liter 4-cylinder that delivers 236 horsepower and a healthy 267 lb-ft of torque (248 horsepower and 273 lb-ft of torque using premium fuel). Power for either engine choice is sent through a CVT (Continuously Variable Transmission). Front-wheel drive is the standard setup, while an all-wheel-drive system is available only for the base 2.5-liter engine. For the turbocharged variable compression engine, the first of its kind to be used in a sedan, the Altima scoots along pretty good with a 0-60 mph time of about 6 seconds. 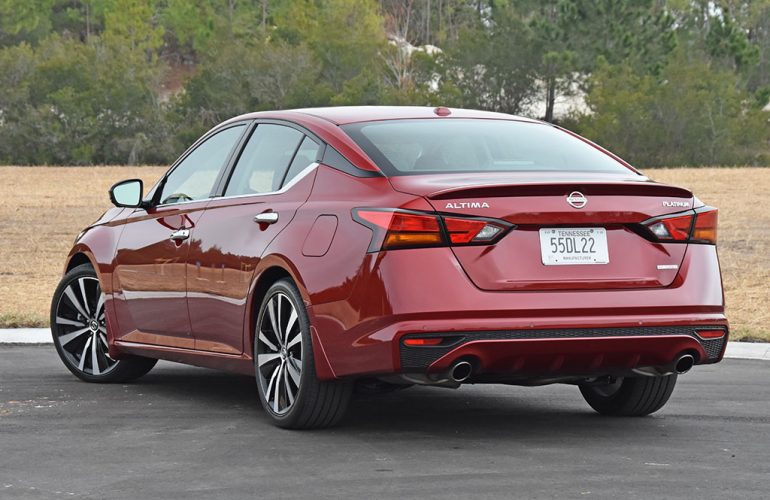 The CVT transmission in the new Altima is among the best of its kind on the market in my opinion. Though, saying such is somewhat of an oxymoron considering how disliked CVTs are in the automotive enthusiast community. Most of the fun from the Altima Turbo is sapped due to the CVT, which at times attempts to simulate a traditional automatic transmission’s gear shifts with stepped ratio chances. In all, the initial acceleration of the Altima from a complete stop may be a little sluggish, but it’s at no fault of the turbocharged VC engine, which is eager to spin up quickly without any noticeable turbo lag or the want for more power. Once things start moving, around 20 mph or so, the CVT allows the turbocharged engine to get into its power band and the Altima surges forward with authority, mostly a force that feels more substantial than 236 horsepower on paper (using regular unleaded fuel). Overall, the Altima does well to keep pace on the road and outshine a good portion of its competition in a straight-line battle. The handling is decent with a sharp turn-in and respected balance of the chassis to balance its sportiness yet keep things relatively planted and smooth. Part of such an equitation is thanks to my Altima Platinum’s larger 19-inch wheels and tires (over the 16-inch or 17-inch wheels on the S, SV, SL trims), which do a good job to fill up the wheel wells for an attractive and sporty. 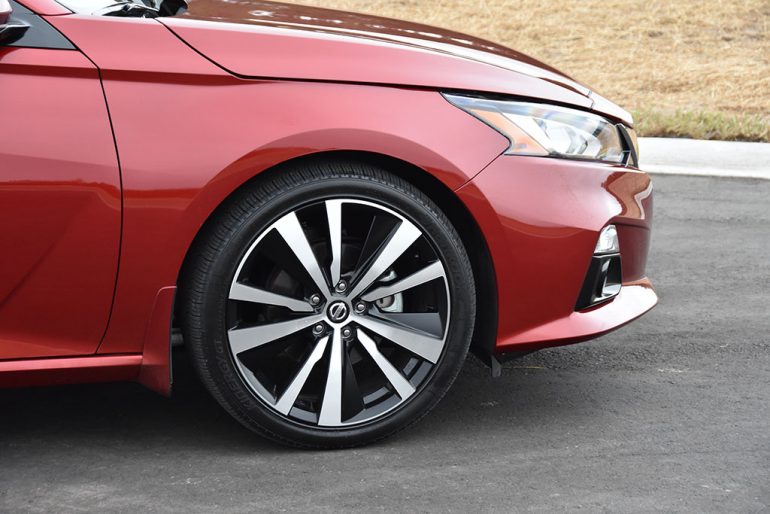 The distinguishing look of the new Altima is often confused with its pricier sibling, the Maxima. The confusion isn’t all a bad thing, but some will want to compare what you miss in opting for the Altima Platinum versus any trim level of the V6-powered Maxima. Fundamentally, you’re missing out on a much more lavish interior and the V6 power that’s found in the Maxima. Conversely, the Altima Platinum VC Turbo is just as quick as the Maxima, which says a lot about the engineering and prowess of the new VC Turbo engine. 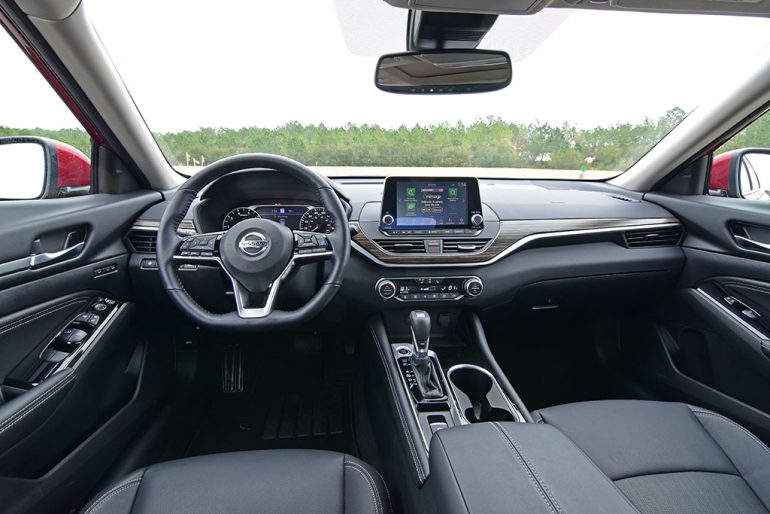 Without comparing the Altima to the Maxima, one will find a decently appointed cabin for a mainstream midsize sedan. There’s also plentiful space throughout the cabin for a midsized sedan, but visibility is sometimes hindered with thick roof pillars and a such a high trunk space blocking the lower view of what’s behind you. While some of the interior accents and trim are on the cheap side, the Altima still keeps things fresh with just enough soft-touch surfaces, a color information screen in the center of the gauge cluster, exceptionally comfortable seats that do their best to virtually eliminate fatigue, and a high-mounted 8-inch touchscreen infotainment unit. There’s no getting around the fact that Nissan may be a little behind on the refinement of the Altima’s interior and the infotainment unit. However, the integration of Apple CarPlay and Android Auto is a step in the right direction to at least keep up with competition while retaining a straightforward setup that’s mostly user-friendly once you get through some of the awkward patterns of accessing certain menus and functions. The surround-view 360-degree camera system is a nice touch but could also use a little improvement to its low-quality resolution. 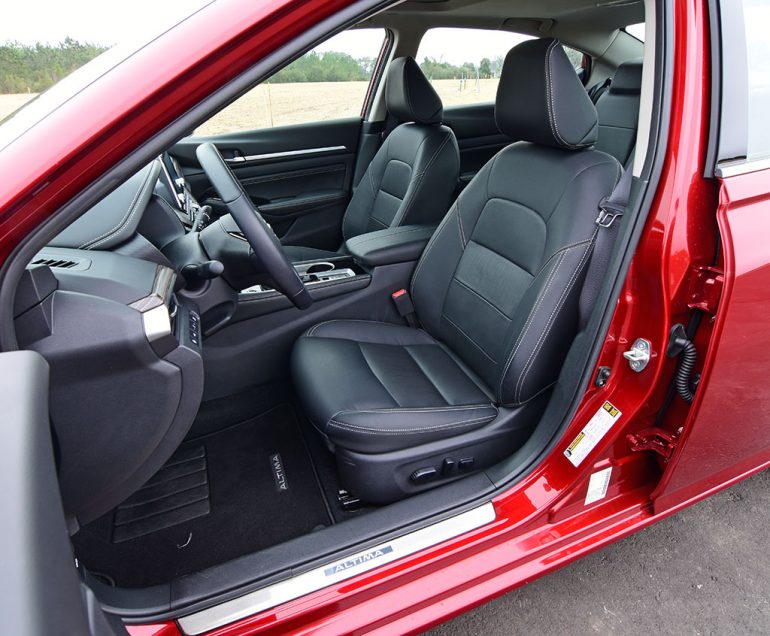 Nissan’s relevance may be in question in some aspects of the current automotive industry. Nevertheless, the Altima remains to be a steady hand for Nissan, and with the offering of its new VC Turbocharged engine, the brand serves up decent power and fuel economy with the EPA estimates of 25 mpg city, 34 mpg highway, and 29 mpg combined. Coupled with the respected power output, the Altima Platinum with the VC Turbo engine is a good combination for mainstream sedan, even if it still uses a CVT transmission. 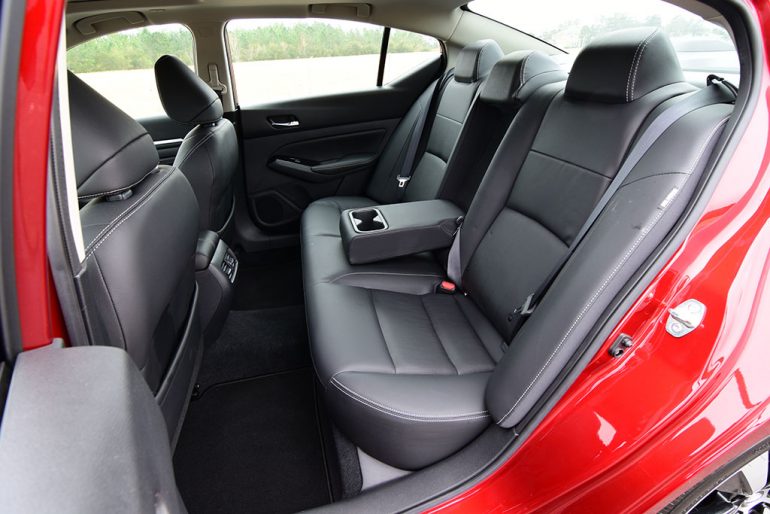 Where the Altima Platinum VC-Turbo may not entice the masses, is the price for the top Platinum VC-Turbo trim’s price. The Altima starts at just $24,100 for the base S trim, and the price for my Altima Platinum VC-Turbo test vehicle is $38,840, including an $895 destination charge. While you’re getting a truly innovative engine, the additional substance to warrant such a price may not be there when we competitors may trade lesser performance for a few more amenities and interior appointments. Regardless, the Altima has the right stuff to keep it relevant -for a mainstream midsized sedan.