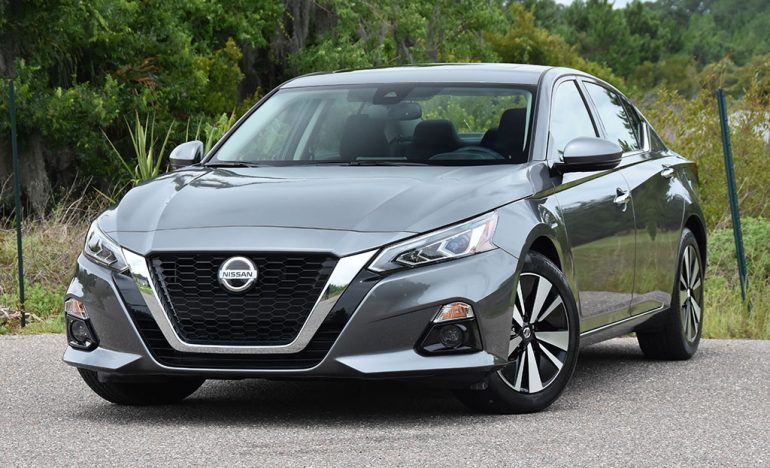 The Nissan Altima has long been a major staple for the brand since its conception in 1992. As part of a respected nameplate, the Altima has grown into its midsized dimensions and once held the crown for sales within the Nissan brand until today’s emergence of crossover utility vehicles took its dominance.

For the 2019 model year, the Nissan Altima gets a redesign and a slight change-up with its engine offerings where it retains the 2.5-liter 4-cylinder engine but adds a new 2.0-liter turbocharged unit replacing the once-offered V6 that light-hearted enthusiasts adorned. Making the change isn’t all a bad thing considering the new 2.0-liter turbocharged 4-cylinder (248 horsepower/280 ft-lbs. of torque) is taken from the brand’s up-market Infiniti bin, a groundbreaking powerplant as the world’s first production-ready Variable Compression Turbo engine. While my test vehicle was not equipped with the 2.0-turbo VC engine, it did have the latest iteration of Nissan’s 2.5-liter 4-cylinder that makes its 188 horsepower and 180 ft-lbs. of torque feel adequate having been mated to a Continuously Variable Transmission (CVT). 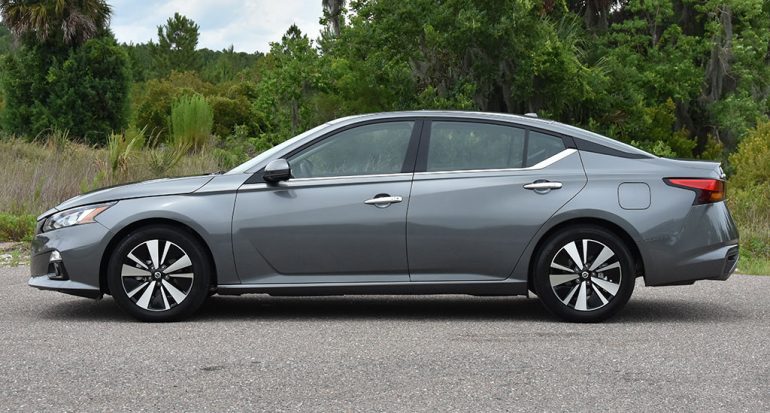 The combination of the naturally-aspirated 2.5-liter 4-cylinder engine and the CVT has never been a favorite of mine. However, the 2019 Altima brings out the best CVT in the market in my opinion where the programming of its control unit to extract all it can from the engine is welcomed. The Altima SV scoots along pretty good for its power output figures often feeling like a bit more than on paper. The only drawback is the Altima’s relaxed initial throttle where CVTs naturally sap power being transferred to the wheels. Though, when things get moving up around 25 mph and beyond, the Altima picks up well with clever torque lock-ups from the transmission to save fuel and give the driver more of a direct feel. The virtual shift points have never been more defined than they are now with the CVT emulating gear ratios as you accelerate to act more like a traditional automatic transmission with gears. When put to the test, the Altima SV 2.5 FWD reaches 60 mph in about 7.5 seconds. The optional all-wheel-drive Altima, which can only be paired with the less-powerful 2.5-liter engine, runs to 60 mph in about the same time. 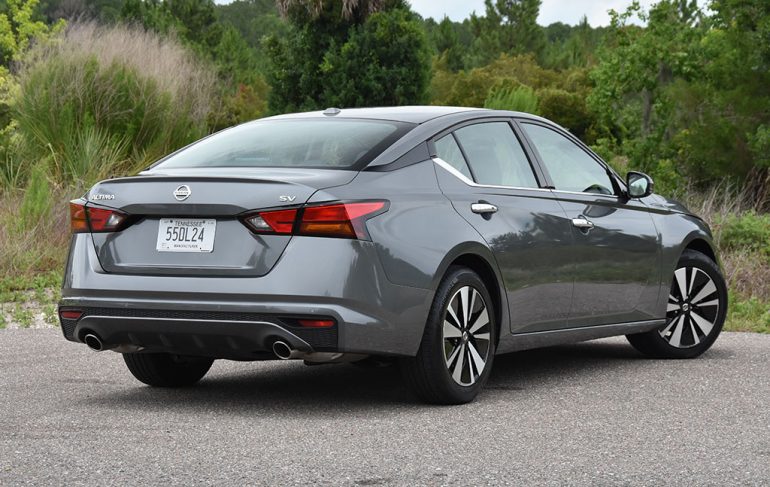 Continuing the point of fuel savings, the Nissan Altima is known for being a trendsetter for a mainstream midsized sedan. Now, the Altima improves upon EPA figures to get 28 mpg city and 39 mpg highway, which is pretty good for a vehicle of its size. 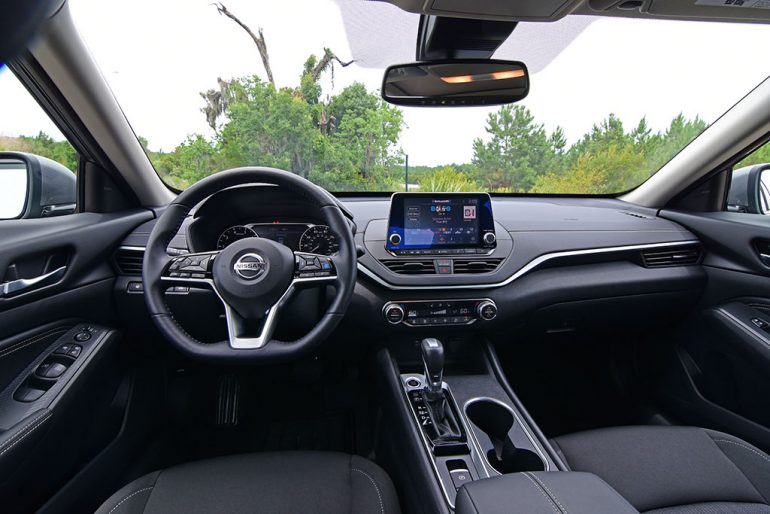 Speaking of size, the new 2019 Nissan Altima makes clever use of its slightly enlarged interior space. Comfort remains to be at the forefront with the return of the NASA-derived zero-gravity seats, which feel to be the most comfortable seats for mainstream automobiles even when they’re wrapped in the base-level cloth as in my SV test vehicle. 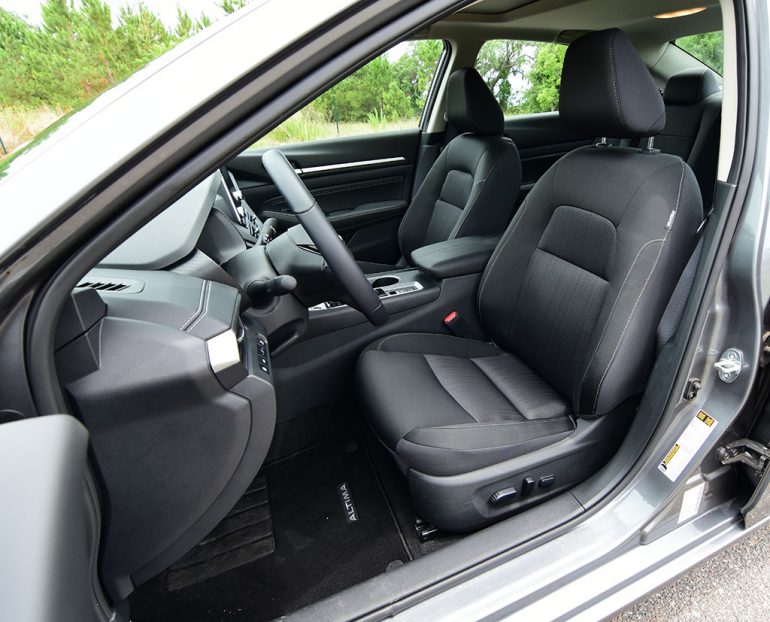 The instrumentation along with the interior appointments have good functionality but lack any stand-out features other than the plethora of active safety features. The new Altima comes chock full of all that you expect in a modern-day vehicle for safety and advancements like AppleCar Play, Android Auto, and Nissan’s praised ProPilot Assist system, which slightly forwards driving autonomy but still requires driver attentiveness and hands on the steering wheel. 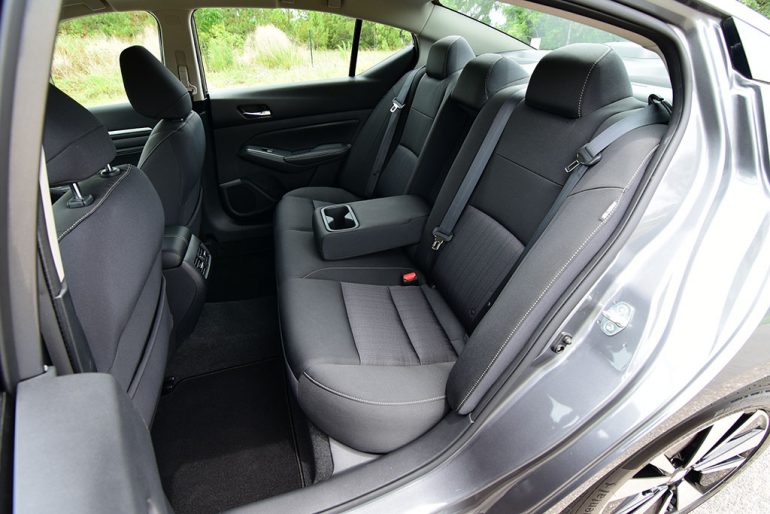 The overall driving character of the new Nissan Altima is greatly improved in my opinion. Even with the SV trim, which isn’t near as sporty as the SR trim, feels more planted. The steering feel is welcomed, too, with a nearly perfect weight. Ride quality is also a step above what it used to be with a nicely damped ride that does excellent to balance road feel, sportiness, and overall comfort when it is needed on rough road surfaces. 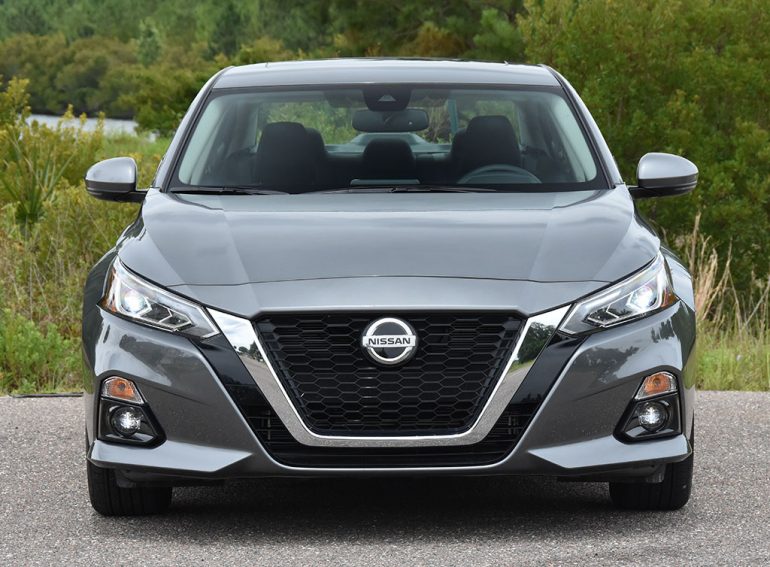 Nissan’s Altima has come a long way and the newly redesigned 2019 model year is its best yet, even if there isn’t a V6 engine available any longer. With as many as six defined trims, each with various sub-trims and AWD offerings for the trim levels that have the 2.5-liter engine, there’s something for many to choose. Moreover, the Nissan Altima remains to be a good value for a mainstream midsized car with a starting price of $24,000 and a price of just over $28,000 for my SV 2.5 FWD test vehicle, which is a sweet spot for getting many desirable amenities and the full suite of active safety and ProPilot assist features.