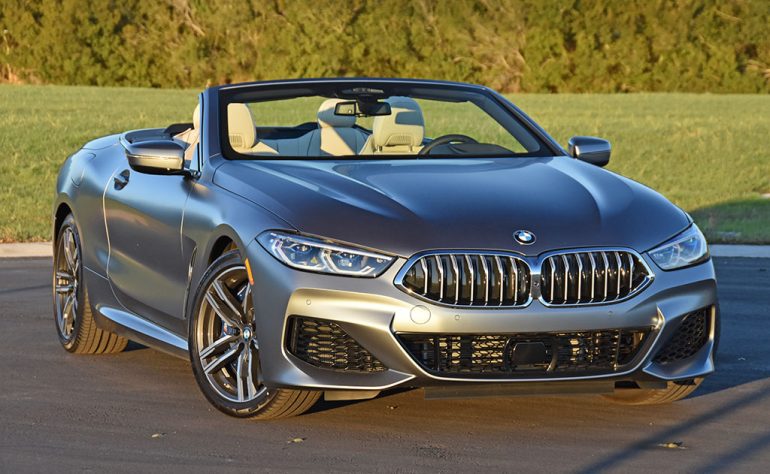 The BMW 8 Series can be thought of a mysterious vehicle when it was first added to the German brand’s lineup in the early 1990s. Captivating a unique audience, the BMW 8 series moved the needle for the luxury ground tourer of the time. For a second generation and return of the 8 series, BMW gets in a better position to compete with Mercedes’ SL and S-Class Coupe but does so on its own terms for a wider trim range for the 2020 model year bringing the 840i to the game with the brand’s turbocharged inline-6-cylinder engine.

The welcoming dynamics of the 8 series that I first witnessed in the powerful 850i Convertible last year are also found in the 840i, even with its lower horsepower and torque figures. In a nutshell, the BMW 8 series touts a remarkable chassis that delivers on performance but never departs from its luxury appeal and appointments. Though, such luxury appointments come at a six-figure cost, even when you opt for the lesser-trimmed 840i. 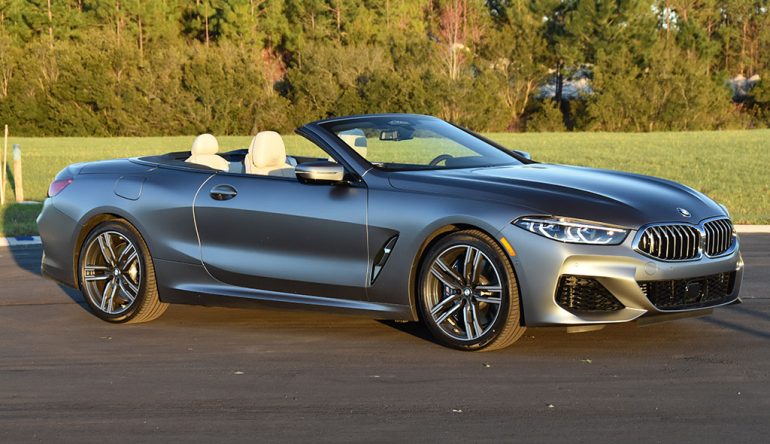 On the front of performance, the 3.0-liter inline-6-cylinder force-fed by a dual-scroll turbocharger is a surprising performer with 335 horsepower and 368 ft-lbs of torque that starts to max out at just 1,600 rpm. Mated to a delightful 8-speed automatic transmission, the 840i doesn’t lag around and feels much more substantial than its power figures indicate on paper. Zero to 60 mph ticks off at about 5 seconds, which is .4 seconds slower than the coupe variant of the 840i. 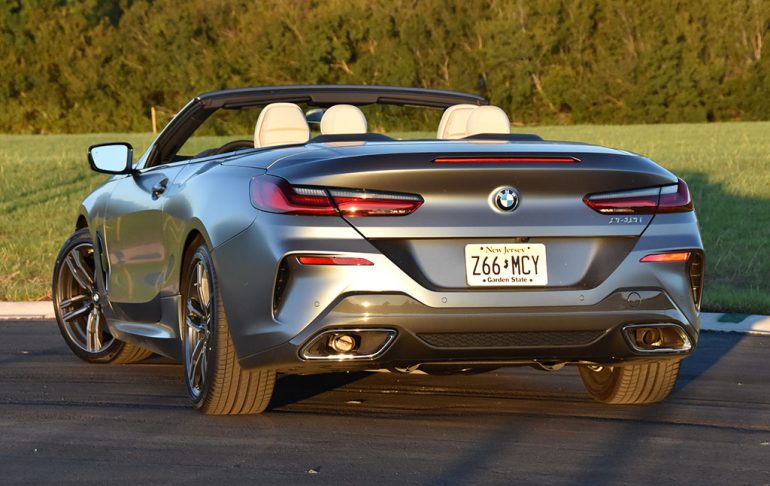 While it’s not quite up to par with its more-powerful twin-turbocharged V8-powered 850i sibling, the welcoming dynamics of the chassis and its stability at speed are part of the 8 series’ new enthusiastic DNA. Fundamentally, 100 mph feels like you’re cruising at 65 mph until you see flashing blue lights in the rimless review mirror. Even without the rear wheel steering as part of an optional Integral Active Steering package, the 8 series turns in sharply and handles surprisingly well when pushed into turns. In some ways, the 840i feels nimble even at its 4,211 pounds, which isn’t terribly bad for a grand touring luxury convertible. 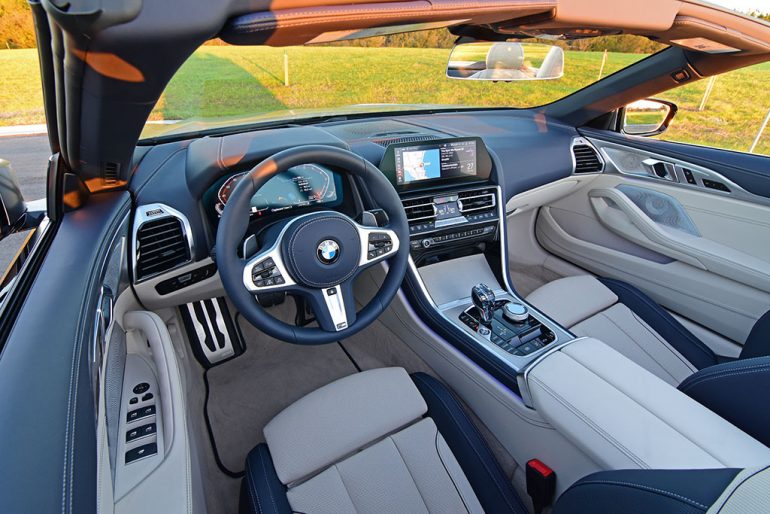 Just like my 2019 BMW M850i Convertible reviewed last year, the 2020 BMW 840i Convertible shines brightly with its inviting interior that’s chalk full of luxury with a well-thought-out dashboard and latest iDrive infotainment unit. With virtually no change from my experience in the M850i Convertible, the 840i Convertible brings forward-thinking to tech with the use of wireless Apple CarPlay and a quick-responding large touch-screen and redundant physical iDrive controls. 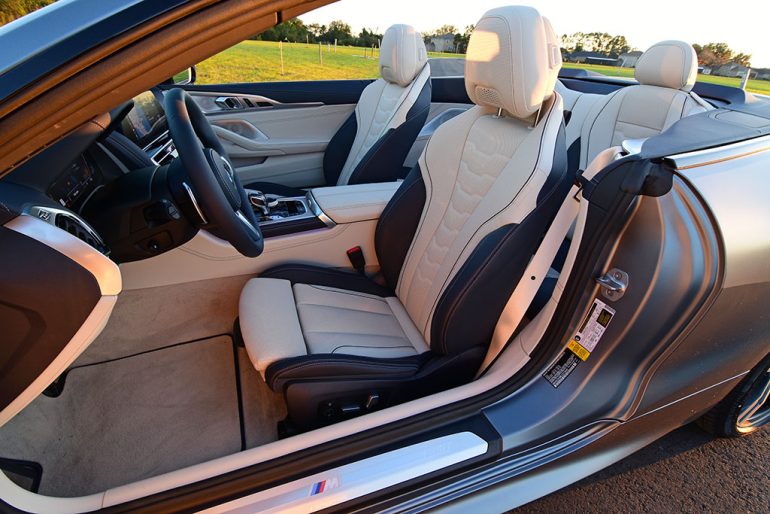 Probably the only discerning part of the 840i Convertible when compared with the M850i Convertible, would be the very-similar pricing where my nearly-loaded 840i Convertible test vehicle cost almost as much as the nearly-loaded M850i Convertible I drove last year. The price difference is just $6,000, which to my guess is what you pay for the additional power, some 188 horsepower more and an additional 185 ft-lbs. of torque more found in the M850i’s 4.4-liter turbocharged V8. Mind you, the M850i was equipped with a few more features, such as the Integral Active Steering and gesture controls. The only feature I found on my 840i Convertible to add value was the new neck warmer feature and the stunning Frozen Bluestone metallic matte exterior paint. 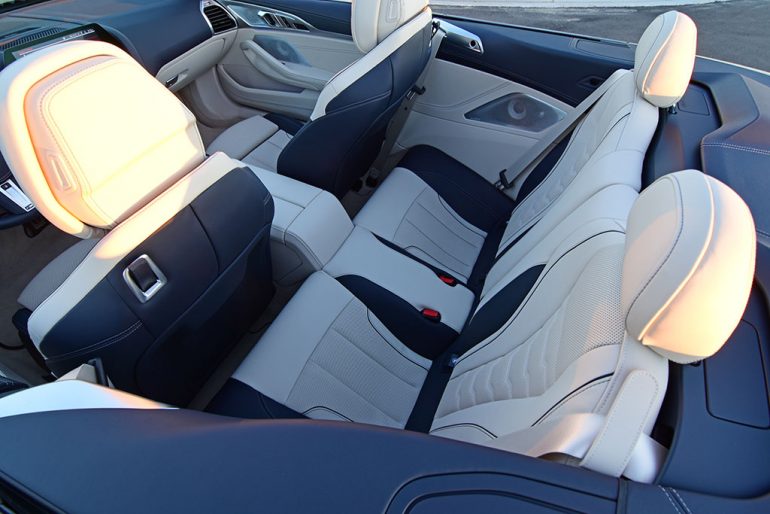 Buyers of the 840i Convertible will save on gas, getting 22 mpg city and 29 mpg highway, but miss out on the thrill of the V8 power in the M850i. If the added power doesn’t matter to you, the 840i Convertible will suffice to let the top down on the latest German two-door luxury cruiser. Still, one will have to justify the price of my test vehicle at $117,000 ($97,400 base price) for missing out on a few-grand north for the more powerful player. There’s also a significant power boost in the 600-plus-horsepower M8, which is a completely different level from either 8 series trims – but at a cost of at least $133,000 for the coupe and $143,500 for the M8 Convertible. 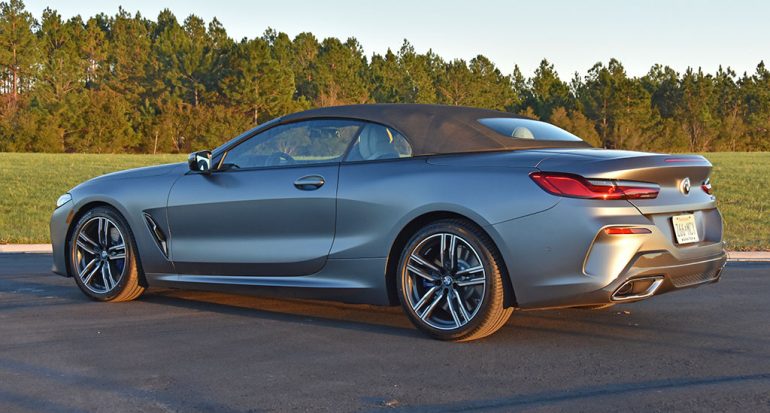