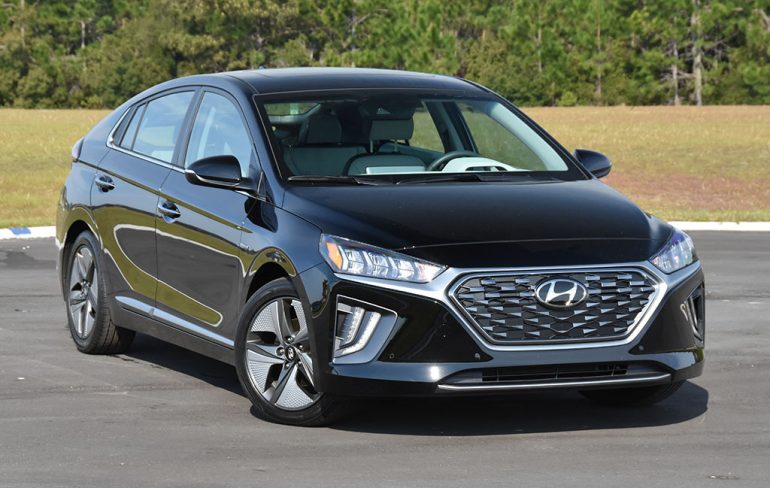 Hybrid vehicles have stood the test of time and still have a place in American society even when the economy is holding strong. Hyundai has given the Hybrid segment a respectable try with the Ioniq, first introduced three years ago as a 2017 model year vehicle. From its conception and now to the current 2020 model year, the Ioniq has received a few updates but doesn’t depart from its respectable fuel-sipping character that takes a stab directly at vehicles like the Toyota Prius.

In my recent drive of the latest iteration of the Ioniq, I find a few updates that are welcomed, such as a refreshed infotainment setup with updated touchscreen interface, more touch-capacitive buttons below the touchscreen, a reworked digital gauge cluster, and a slightly updated exterior. The small changes go mostly unnoticed but pays homage to Hyundai listening to consumer wants and never leaving their products stagnated.

The drivetrain of the Hyundai Ioniq, combining a 104-horsepower and 109 lb-ft of torque 1.6-liter engine and a 43-horsepower electric motor, keeps the Ioniq zippy around town. Power delivery is sometimes inconsistent, but it is there when you need it. While there is some hidden substance that occasionally arises from full throttle, the engine and electric motor seem to fight for deciding what the driver wants. However, overall, the power is just enough and runs nicely beside its direct competition. Zero to 60 mph comes about in 9.4 seconds. 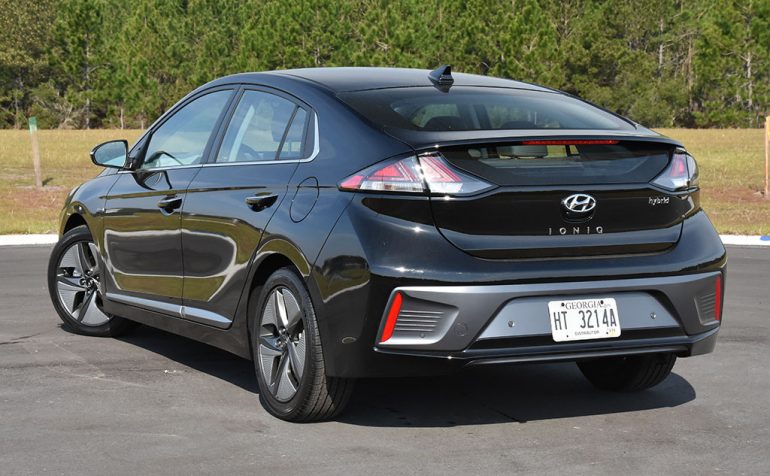 The way the Ioniq drives plays on its ability to manage power from its electric motor and gas engine nearly seamlessly. While not as smooth as the Toyota Prius for engine-motor management, the Ioniq does well to transition or combine power from the two sources. The total power output of 139 horsepower and 125 lb-ft of torque feels adequate, and the two driving modes, Eco and Sport, define a welcomed throttle advancement when placed in sport by moving the gear shifter to the left. The default Eco mode sometimes delays throttle input to the point of frustration when jumping out in traffic. Fortunately, the ride quality is good, and the steering is sharp for its class. The road noise that enters the cabin builds with speed, but at times it is refreshing to really know how fast you’re going, which is sometimes deceptive when the gas engine shuts down and the electric motor takes over when you’re just cruising or coasting at speed. 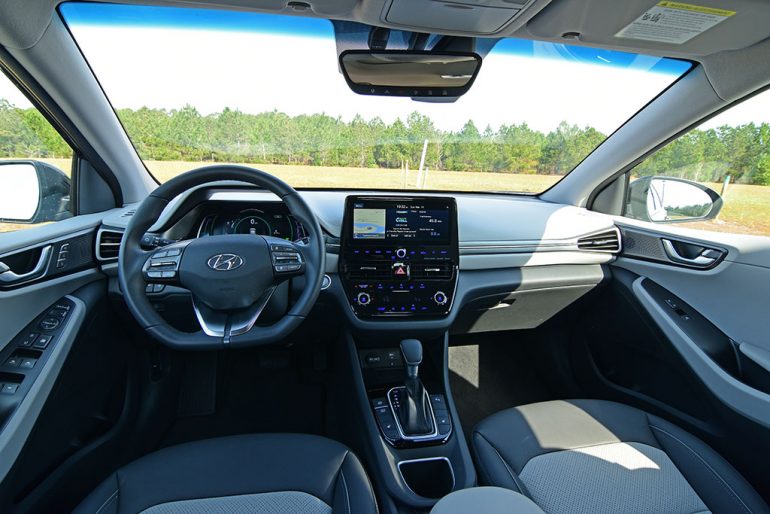 The cabin, as I remember from my previous reviews of the Ioniq, remains somewhat on the uncomfortable side on longer trips but is functional in how there are welcomed features at your easy reach. Out back, the cargo area benefits from the hatchback design, and there is a good amount of rear-seat area for at least two adults and a kid in the middle. There’s a good deal of amenities and features to enjoy, such as Apple CarPlay and Android integration, heated front seats, power sunroof, LED exterior lighting, high beam assist auto LED headlights, smart cruise control w/stop and go, and the ability to churn out 55 mpg. Such features are bundled in increments dependent on four different trim levels (Blue, SE, SEL, Limited). 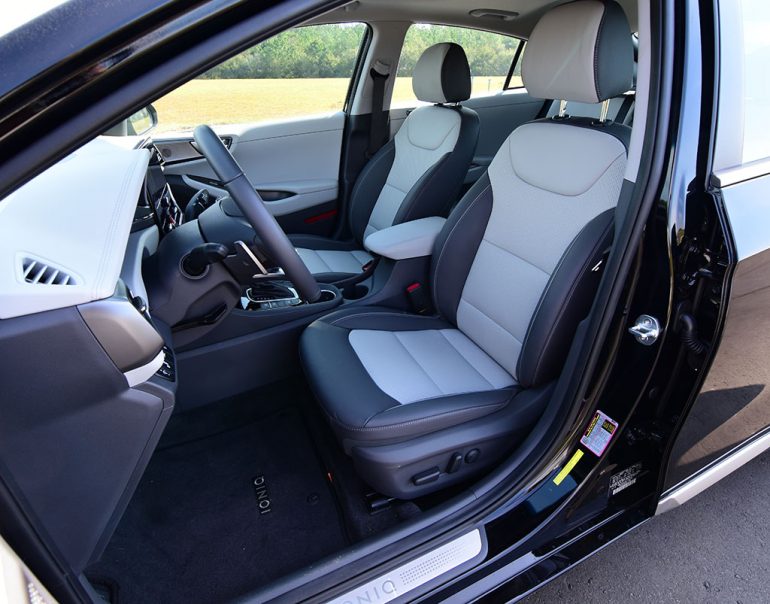 Fuel economy, what really matters in a hybrid, varies greatly and is dependent on the consciousness of the driver. To further explain, I would see mpg numbers like 46 mpg overall if I was attempting to keep pace with fast-moving traffic in the city during the beginning of rush hour traffic. Closely paying attention to my throttle inputs with slow accelerations from stoplights and clever use of the brake pedal to benefit from its regenerative braking, which appears to be smoother than before, I could muster out about 53 mpg overall. The best I could get was about 61.8 mpg when electing to use the clever drivers-side-only air conditioner control and keep it below 55 mph. Such a number was surprising to get when driving the Ioniq conservatively, granted I didn’t get above 55 mpg on the back roads I traveled for about 39 miles in total for the 61 mpg trip. 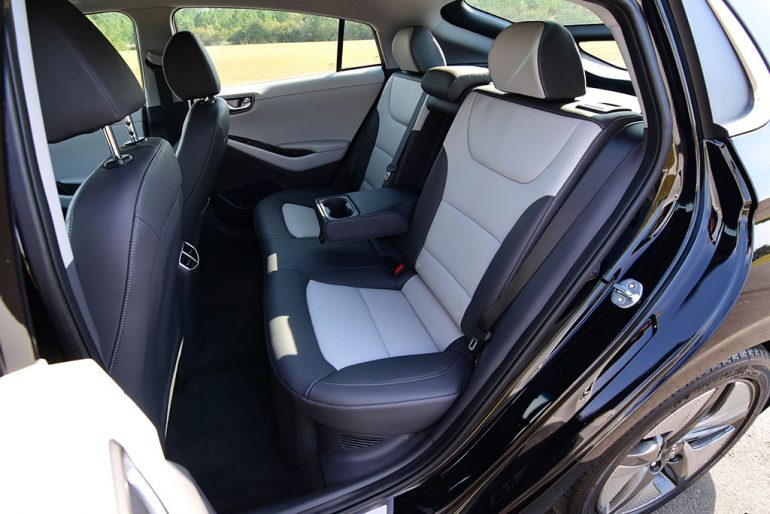 Touted as the most fuel-efficient car in America, the EPA estimates come in at 55 mpg city, 54 mpg highway, and 55 mpg combined, which are attainable numbers in the real world for most law-abiding circumstances.

In the fashion of what you expect in a new Hyundai, there is a bevy of safety features included as standard even in the base Ioniq Blue trim, such as Forward Collision Avoidance Assist, Lane Keeping Assist, Driver Attention Warning, and High Beam Assist. Moving up to my loaded-up Limited trim you will add smart cruise control, highway drive assist, blind-spot collision avoidance assist w/rear cross-traffic collision-avoidance assist, lane following assist, and parking distance warning for front and back. 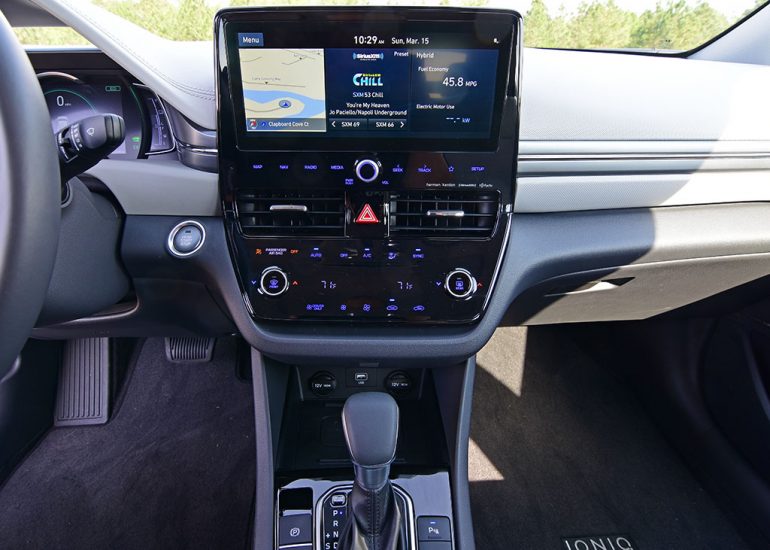