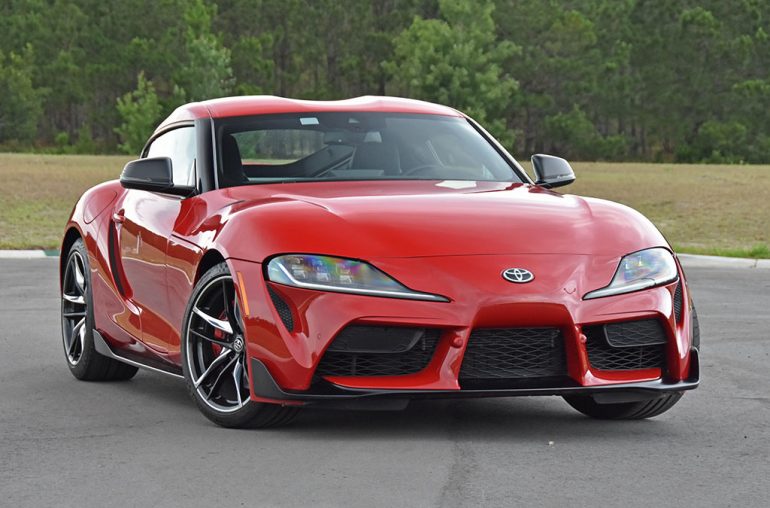 The Toyota Supra has always had a special place in my heart. After all, a turbocharged third-generation Supra manual was a vehicle that I essentially learned how to drive a manual transmission. Even better, I get excited every time I see a fourth-generation Supra – it’s my unicorn – especially the 6-speed manual twin-turbo. Now, with the new Toyota Supra, the 2020 model year, things are interesting, to say the least. That’s not a bad thing, it’s a thing that will probably take time to appreciate for enthusiasts like me- but having the 2020 Supra in my garage for a week is a good start.

I finally had the chance to take a deep dive into seeing what the 2020 Toyota Supra is all about, and I have walked away with some mixed feelings but some promising ones in now understanding what Toyota has done. Of course, you can’t get around the BMW-ness of the new Supra as it uses a BMW powertrain, interior switchgear, and BMW electronics. Outside of that, Toyota has given the new Supra a unique design that takes some cues from the stunning FT-1 concept car and miniaturizes them. In that, the Supra is a love or hate thing for most and I was the brunt of those feelings in driving the new Supra around for a week. 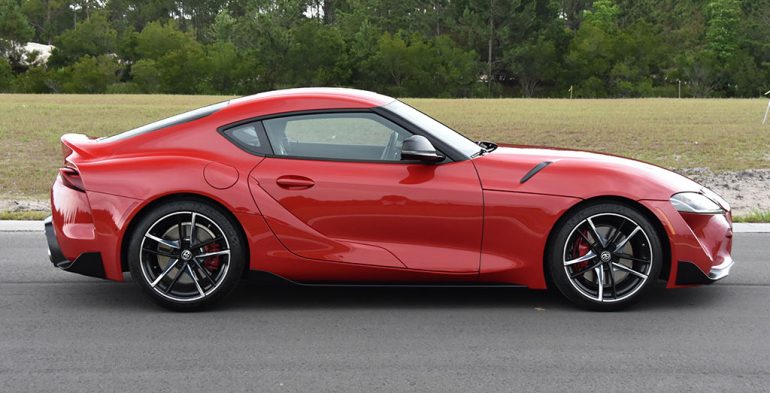 Powered by a 3.0-liter dual-scroll turbocharged inline-6-cylinder engine, the 2020 Supra is good for 335 horsepower and 365 lb-ft of torque. That power is sent to one of the best 8-speed automatic transmissions around (you can only get the new Supra with this automatic transmission – I know, bummer), a ZF unit that snaps off direct shifts almost like a dual-clutch unit. Overall, the performance of the Supra feels substantial and really shines when you push it hard. The engine feels as if it is laying down a lot more power to the rear wheels than stated on paper. Sixty miles per hour comes quick, just 3.9 seconds, and it’s done without much drama from rear wheel spin. The handling is mostly sharp, but the initial turn-in is sometimes unpredictable and twitchy. With a sensation of nearly sitting on the rear wheels due to its long-hood and rearward cabin proportions, the Supra leans more towards a GT cruiser than a pavement thrashing sports car. 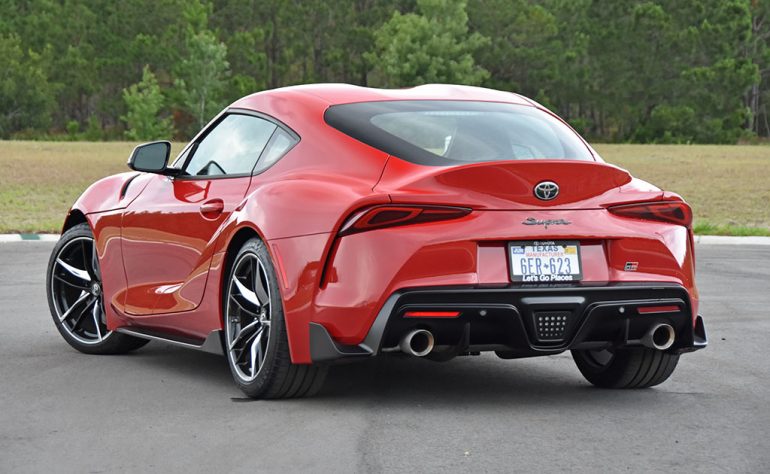 In most of the driving dynamics of the new Supra, it behaves much like its not-so-distant BMW Z4 relative but with a different ride quality, which is probably due to completely different suspension tuning. The adaptive dampers with their two modes, normal and sport, change in a subtle way if you have the sport mode setup in such a way. When I say setup, I mean that Sport drive mode is an Individual drive mode that allows you to configure perimeters like the transmission, engine response, and suspension. The difference in normal and the sport mode is highly noticeable when it comes to the improved engine response, and exhaust note followed up with snap-crackle-pops that let others know that the new Supra means business. Such business comes in a complete livable package that performs well and almost falls in a greatness category. Yes, in my opinion, the new Supra isn’t bad, but it’s not excellent either – it falls somewhere in between, and that’s not a bad thing because at least we have a “new Supra.” Without the collaboration between Toyota and BMW, there would be no new Supra. 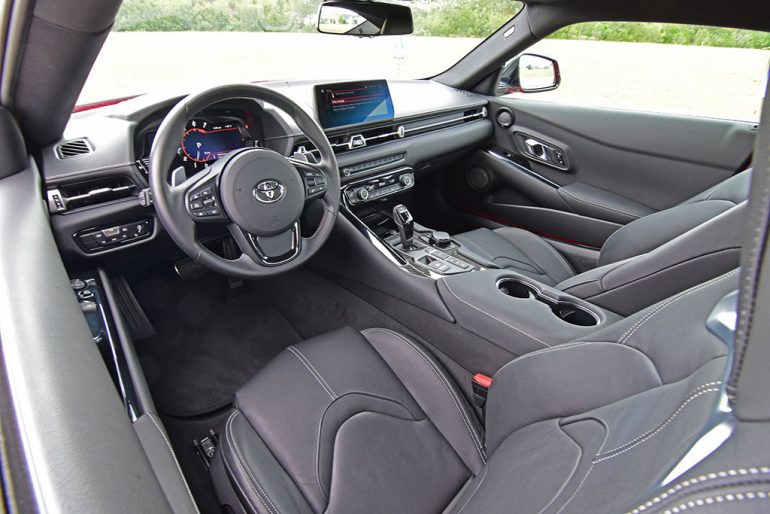 The interior of the new Supra is very BMW-ish, and there’s no getting around such. Granted, BMW makes great interiors, and the Supra’s cabin carries such a tradition and utilizes proven tech from the BMW parts bin that I happen to like. The infotainment system fed through an 8.8-inch touchscreen that can also be controlled by the traditional latest iDrive controller, is up to par for today’s automotive tech expectations. The screen is responsive, and controls are relatively easy after going through a short learning curve. The digital gauge cluster utilizes an 8.8-inch screen as well, but here Toyota doesn’t make much use of the color screen’s real-estate, leaving a good portion of the right-side blank. While the cluster is unique to the Supra, it could use some more flair or at least additional information displayed on the always-blank side of the screen. One thing that annoyed me was the small ambient light sensor always automatically dimming the cluster and infotainment screen when there was a shadow cast over the Supra. There was no way of overriding this feature – I just had to deal with a dim screen on cloudy days or driving under an overpass. 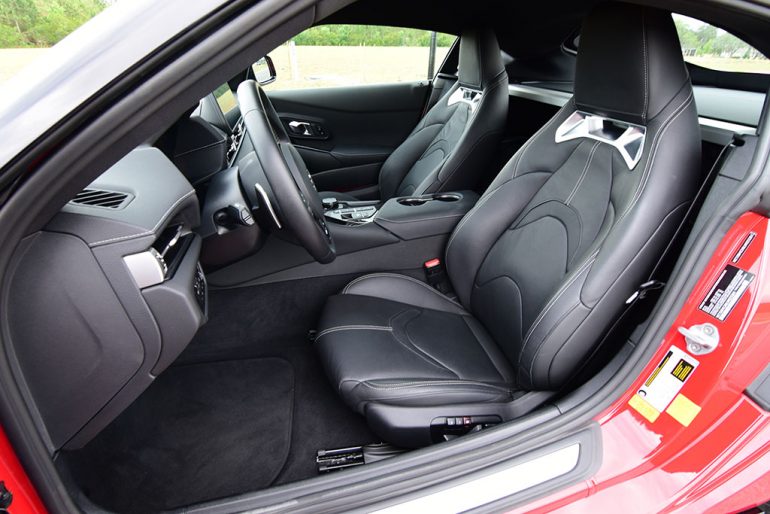 The seats of the Supra, with just two of them, have just the right amount of space and provide excellent support. I did feel that the seats were not the kind you want to be in for several hours. Thanks to the double-bubble roof, there is a good amount of headroom. However, that headroom is available only after ducking your head past the ultra-low door pillar, which I lost count on how many times I hit it – but I am 6-feet-3-inches tall. 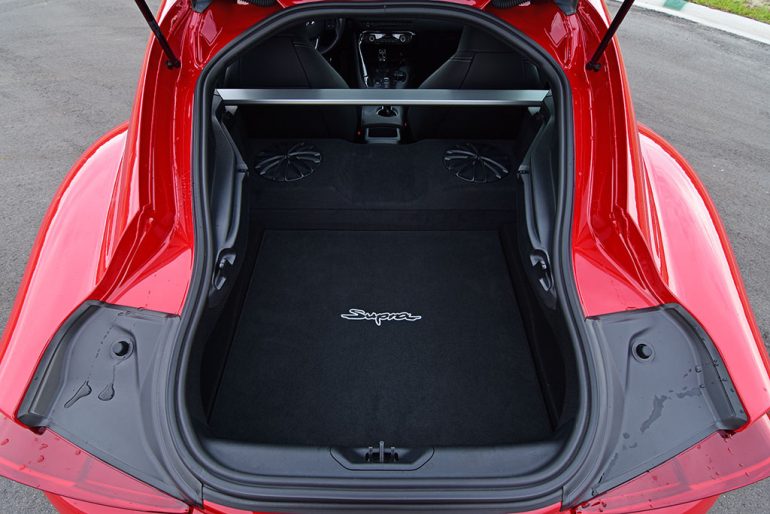 For having a new Supra to play with in the automotive market, we should be thankful – mostly thankful for BMW lending the larger collective of parts to much such a vehicle but thanks to Toyota for entrusting a German auto brand to help fill a coveted slot for enthusiasts around the world. For a starting price of about $50K, the new Supra is at the right price point for the amount of equipment you get. Though, getting at least the Supra Premium with all of the desirable options for an as-tested price of $56,140 is the sweet spot for the return of the prided Japanese German sports car.