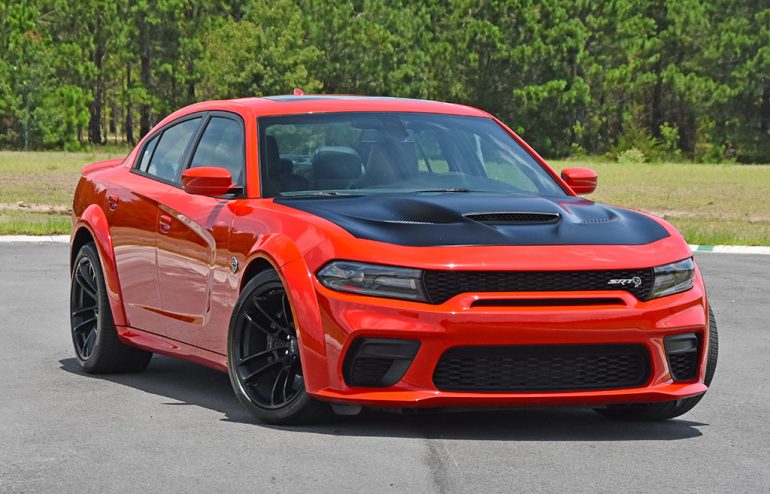 To my amazement, Dodge has managed to keep an aging vehicle fresh and relevant through their clever engineering and subtle design aspects. Such changes start and end with massive amounts of horsepower and a better footing on the ground through a widebody variation of the Charger Hellcat.

The new Dodge Charger is quite the aged vehicle, but that doesn’t matter to its established and growing fan base considering there are variations of the Charger that pack in 707 horsepower and a widebody that’s now the designated body design for the Charger Hellcat starting with the 2020 model year. 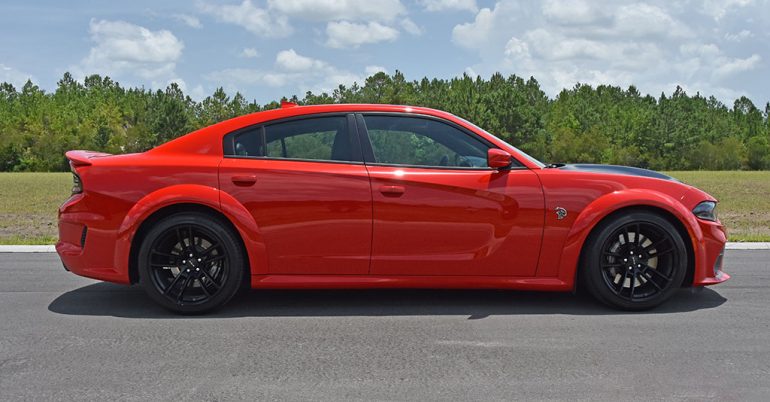 There’s much to be said about the Hellcat vehicles from the Dodge brand as they all tout a 6.2-liter Supercharged V8 engine good for 707 horsepower and 650 pound-feet of torque sent through a proven 8-speed automatic transmission. For the recent two model years, the Charger SRT Hellcat gets a more robust cooling system taken from the Demon that fundamentally permits a Race Cooldown mode to lower the ambient temperature of the Supercharger Intercooler, which essentially will recover some power by cooler and denser air flowing through the intake manifold. The other major change is the addition of the widebody stance through bulging fenders that make way for wider 305-patched tires squared up on all four corners. 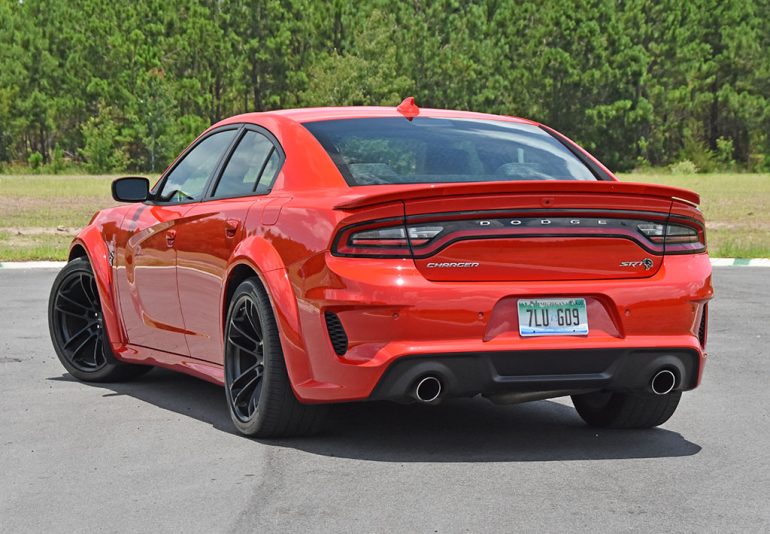 The wider track and tires of the new 2020 Charger Hellcat Widebody allow for better traction, something all Hellcats need when they come out of the factor. I must say, even though the 305 tires are still not wide enough to lay down all of the menacing horsepower from a cold standstill, they do improve the overall feel and stability of the Charger over the narrower track and poor 275-series tires it used to have years ago. 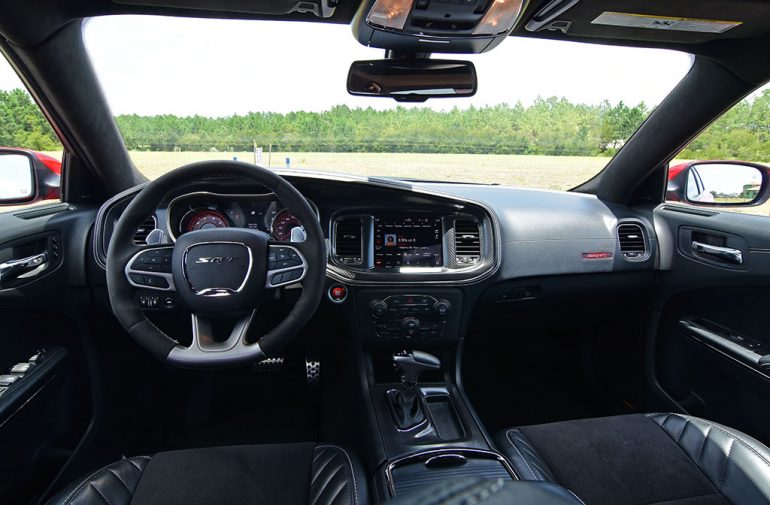 The performance of the 2020 Charger SRT Hellcat Widebody remains mostly of what I remember in my many drives of Hellcat vehicles but with an extra mean look and a better feel through turns and overall acceleration. Still, the big Charger wallows a bit and shows its heft when you don’t want it to, often causing a pucker factor for the driver. Passengers, up to 4 of them, may not be as scared unless the tires grip, and they feel the thrust in the thickly-padded and bolstered heated and ventilated front seat or heated rear outboard seats rushing to 60 mph in just 3.6 seconds. 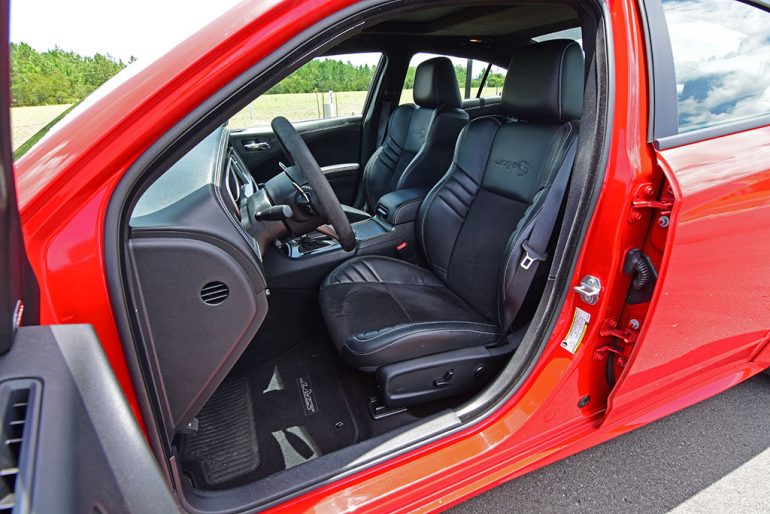 In all, the Charger shows its age but does it with grace. Inside is an area that is laced with many soft-touch surfaces but doesn’t do much to modernize or depart from its decade-plus-old roots. The main focal points, which remains to be the 8.4-inch touchscreen infotainment unit and the red gauge cluster, are slightly updated with additional performance screens and apps. Such apps keep enthusiasts appeased and add a modern-day enjoyment by allowing configurations of the drive modes and displays of a nearly-endless array of performance and data information sets. 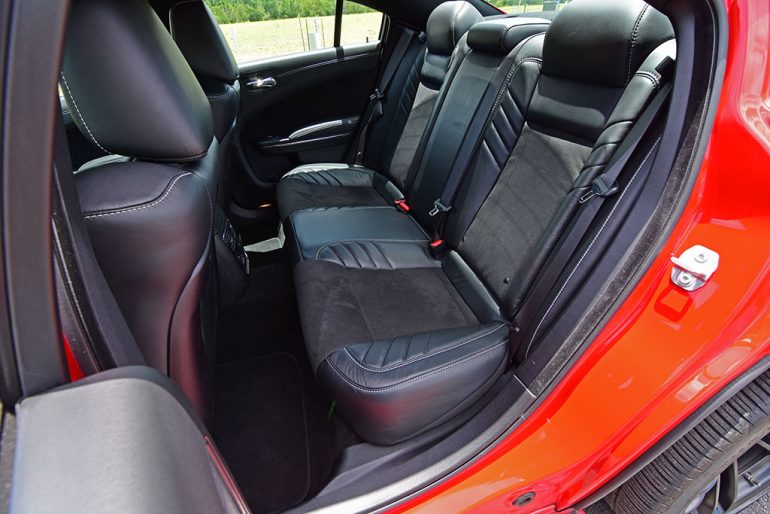 At the end of the day, the new Dodge Charger Hellcat Widebody becomes a huge decision in more ways than one. The most important one being the pricing, which has grown into an $83,000 figure for my loaded-up test vehicle. While you can get into a new Dodge Charger Hellcat Widebody for about $70K, the higher pricing is a little hard to digest unless you purposely factor in the power figures of the Hellcat, which you’re hard-pressed to find in anything else unless you spend six-figures. I, for one, think the price of admission is worth it considering all of the factors – but I’m a long-time automotive enthusiast that takes delight in an American family muscle car that you really can’t compete with in terms of power output.