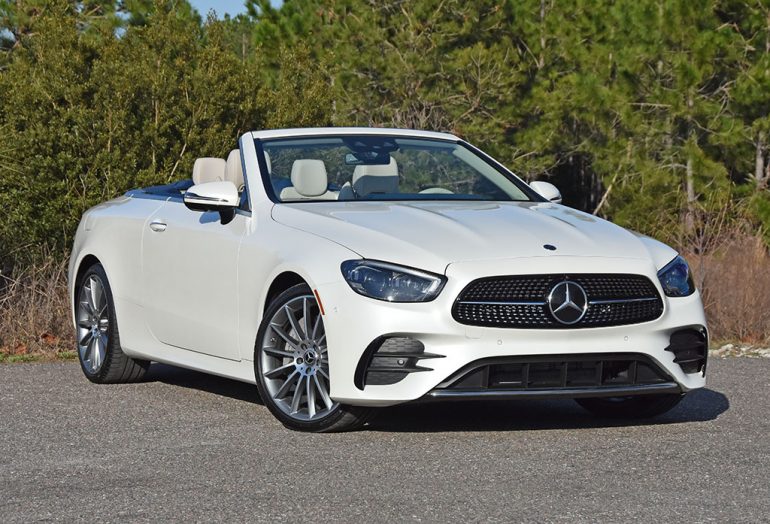 When it comes to offering a few classy and unique vehicles in the luxury segment, Mercedes-Benz has an advantage considering the vast lineup of models. Within that lineup are a few distinctive offerings, one being the newly refreshed E-Class Cabriolet (Convertible), a luxury sports coupe convertible that exudes a respectable classiness wrapped in a cohesive luxury package.

The new 2021 Mercedes E-Class has been refreshed for the model year featuring an updated exterior look, a new steering wheel that mimics the new S-Class, inclusion of the new MBUX (Mercedes-Benz User Experience) infotainment system, and new powerplants featuring the latest EQ mild-hybrid systems of other new Benz models. 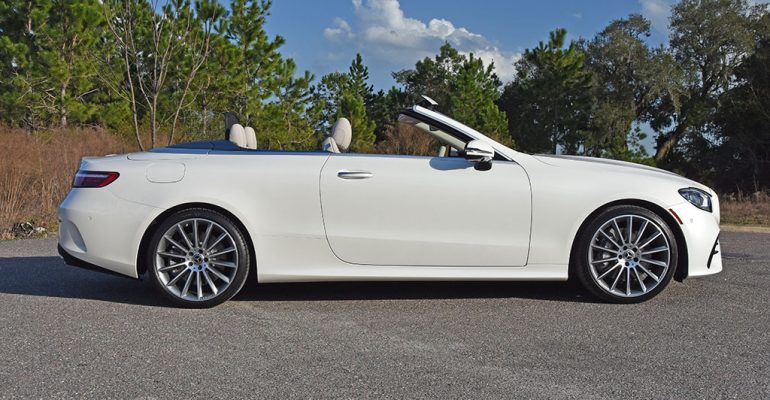 For this week, the vehicle of choice in my driveway is the 2021 Mercedes-Benz E450 Cabriolet with the welcomed 4MATIC all-wheel-drive system. Powering the new midsized luxury coupe is the brand’s newest twin-turbo inline-6-cylinder engine with the EQ-Boost mild-hybrid 48-volt system. The drivetrain, as experienced in many other of my recent Mercedes test drives, is a nice setup that combines the smooth 362 horsepower and 369 lb-ft of torque engine that has an EQ-Boost electric motor that serves multiple duties as a starter, power generator/alternator, and power-adder only when the gas engine is running. Essentially, the EQ-Boost turbocharged 6-cylinder engine is a modular unit that internally encases traditional engine components that you normally find attached to the fan belt – there is no fan belt. 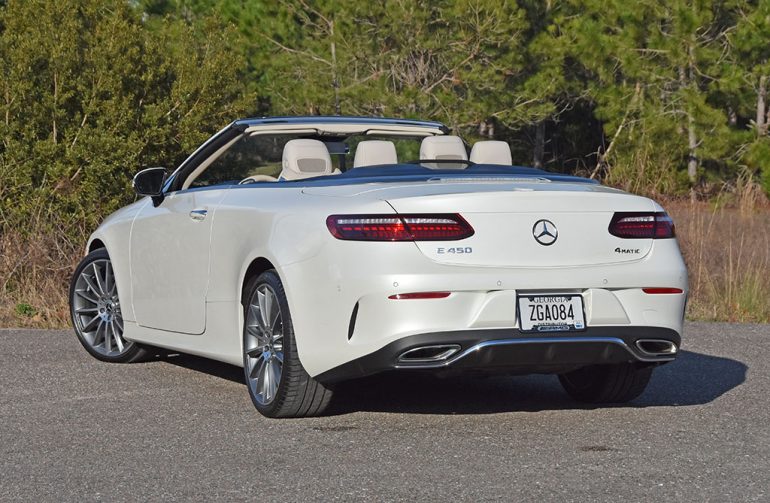 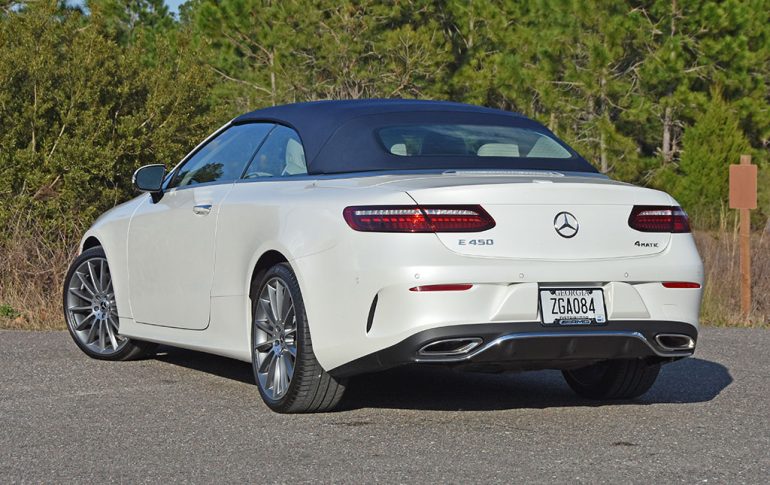 Performance from the unique powertrain setup is decent and gets the E450 Cabriolet up to 60 mph in about 4.7 seconds. The mild-hybrid EQ-Boost system not only helps the E450 Cab have that respectable acceleration, but it allows the engine to shut down when costing in Eco mode or when stopped – for longer periods of time compared to any other vehicle with a traditional start/stop system. Currently, the EPA has not given me the exact figures for the 2021 E450 4MATIC Cabriolet. However, through the clever use of the mild-hybrid system and engine management, I was able to squeeze out about 27.5 mpg on the highway and 21.8 mpg in the city when really pushing hard out of the E450 Cab. I averaged about 24 mpg overall. 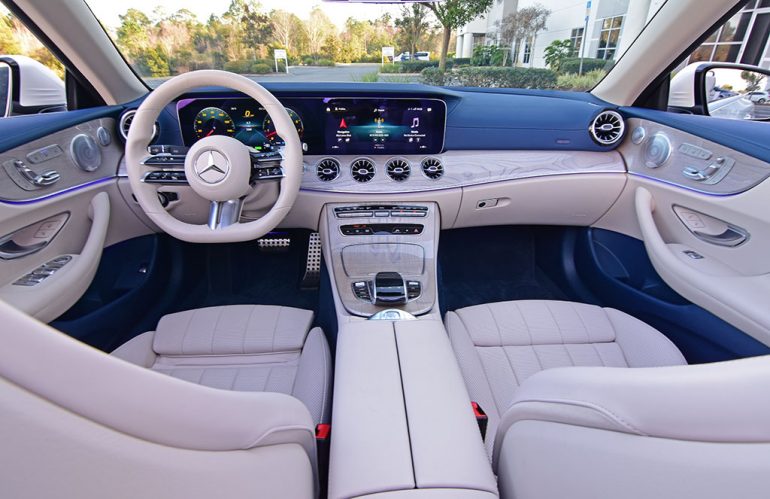 Handling for the E450 Cabriolet feels a bit uneasy at first, and you tend to feel a bit of extra heft possibly from the convertible top’s mechanics, which enable you to lower or raise the top when driving up to 37 mph. Otherwise, the E450 tackles twisty roads without too much complaint other than the suspension being tuned more to the soft side. The air suspension setup on my E450 Cab test vehicle is soft, even when it is placed in the Sport+ drive mode setting, one of three modes for the adaptive dampers. While the air springs lower the vehicle a bit in Sport or Sport+, the E450 Cabriolet still feels soft but remains mostly buttoned down when riding over rising road surfaces, bumps, and undulations. Here, I imagine the more stable setup is reserved for the AMG E-Class. 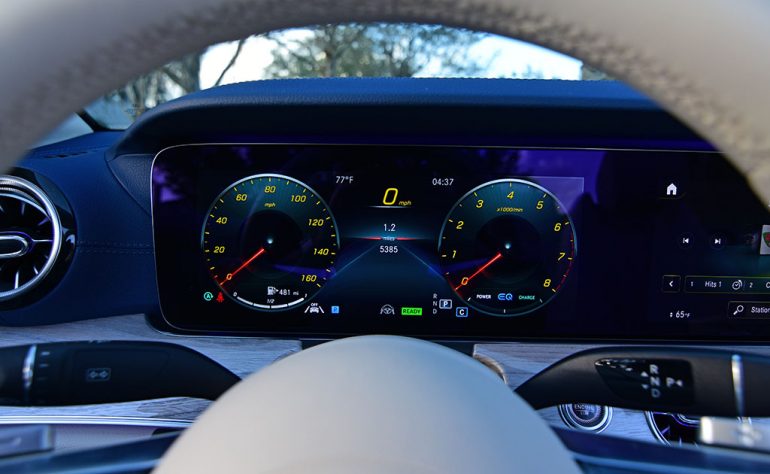 The interior of the new Mercedes E450 Cabriolet is full-on classy, from the accented “Yacht blue” color of the soft-touch Nappa leather dashboard and door trip above the beltline, to the Macchiato beige leather seats and high-gloss light brown Sen Wood trim, my E450 Cab has quite the luxurious and inviting cabin. In the modern tradition of Mercedes-Benz, the updated E450 Cabriolet has the same dual 12.3-inch screens, one acting as the configurable gauge cluster and the other as the touchscreen for the latest MBUX infotainment unit. Oddly enough, the E450 Cabriolet still utilized the same previous-generation touchpad and COMMAND control turn-knob instead of the updated touchpad for interacting with the new MBUX system. Still, the system works as expected with its slight learning curve and deep integration of several simplistic vehicle settings and the use of the nifty voice interaction by saying “Hey Mercedes”. Other eye-catching attributes throughout the inside of the E450 Cabriolet are its updated steering wheel that only has pressure-button areas but adds additional button functions through touch-capacitive areas. Additionally, the expected 64-color LED ambient lighting throughout is a unique touch that also delightfully lights up the several dashboard climate vents. Speaking of climate vents, the climate control system is just as sophisticated as the EQ-Boost mild-hybrid system. It knows when the top is down and shoots extra heated air when the temp is low outside. Additionally, the clever AIRSCARF heated neck vents in the front-seat headrests come in handy for those cooler top-down drives. 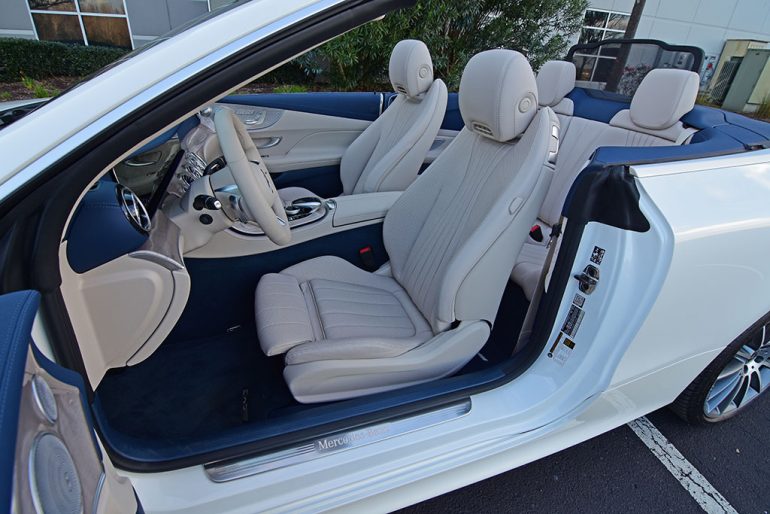 The seating areas for the E450 Cab, heated/ventilated/massaging up front, is quite a special space that pampers the front occupants much more than those in the somewhat cramped back two seats. The rear seating, while larger than that of a C-Class Coupe and Convertible, has more usable legroom but still doesn’t welcome long trips of setting in such a space. 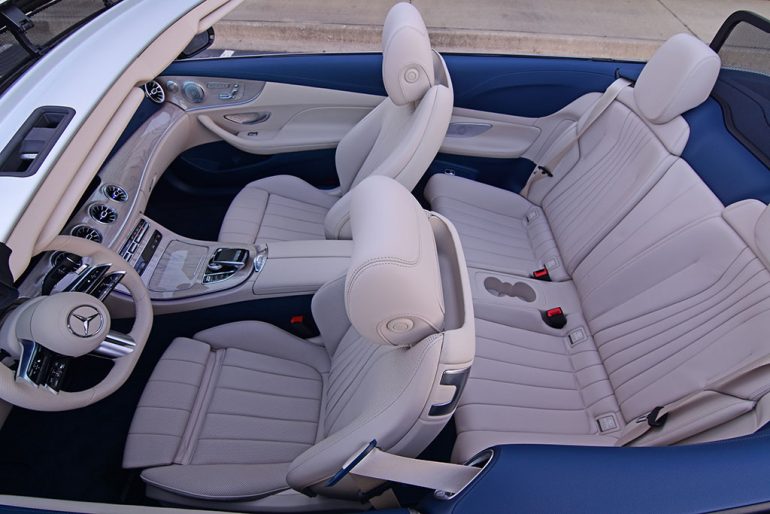 Cargo room is cut short as well, just as you would expect from a convertible vehicle. Though, Mercedes makes a clever way of accessing a bit of extra trunk space if you don’t let the top down by a motorized top divider that can retract out of the way by the push of a button. 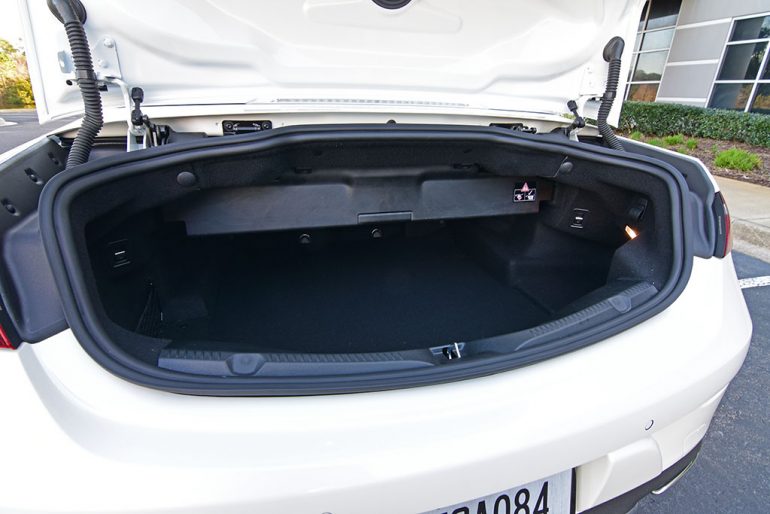 Mercedes-Benz, despite their wide selection of models to choose from, pays special attention to each vehicle no matter how different it may be. The new E450 Cabriolet is no exception and it’s one of the best luxury convertibles with a soft-top you can find on the market under six-figures. My loaded-up to the gills E450 4MATIC Cabriolet test vehicle comes to a price of $91,575, which is a bit much considering the E450 Cab starts at $74,450. That extra “tax” comes from a long list of optional equipment added into the mix, which ticks almost every available Benz feature box, including a bevy of active safety features, and all the comfort options you can think of that fits into the mold of a midsized convertible.