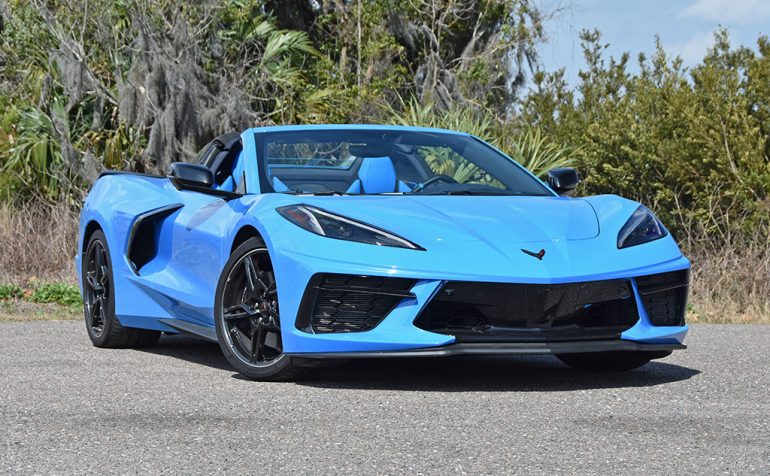 We often hear the notion that “you get what you pay for.” While such a phrase rings true in many aspects of life, there are those rare instances of a bargain to be had, a time where we get a deal of a lifetime. That’s what I think of the new C8 (eighth generation) Corvette, a “deal” in the sense of it being a forward movement of thought, innovation, and sheer American engineering that can all be had for well under six figures yet seemingly play on the level of exotic vehicles that cost two or three times as much.

Having already experienced all of the splendor in the new C8 Corvette last year, I was already excited to get the Convertible variation of the Vette for the week. Moreover, I was excited to check out the latest magnetic ride control dampers equipped on the nearly loaded Corvette Stingray Convertible 3LT-trimmed test vehicle. To my surprise and delight, the magnetic dampers are wonderful in how they elevate the ride quality and sure-footedness of the Corvette. Comparing them to the test vehicle last year with the fixed dampers, GM’s magnetorheological dampers are a modern marvel with how they dampen bumps, undulations, and uneven surfaces on the fly without upsetting the natural progression of the Vette’s body and weight transfer. It’s hard to explain but believe me when I say the new Corvette C8 with the magnetic ride control is among the best riding vehicle of its class that doesn’t sacrifice a bit of its mid-engine sporty handling abilities. That “smoothness” translates well into the cabin where the seats are relatively comfy but ultra-supportive, the way a sports car should have its seats. 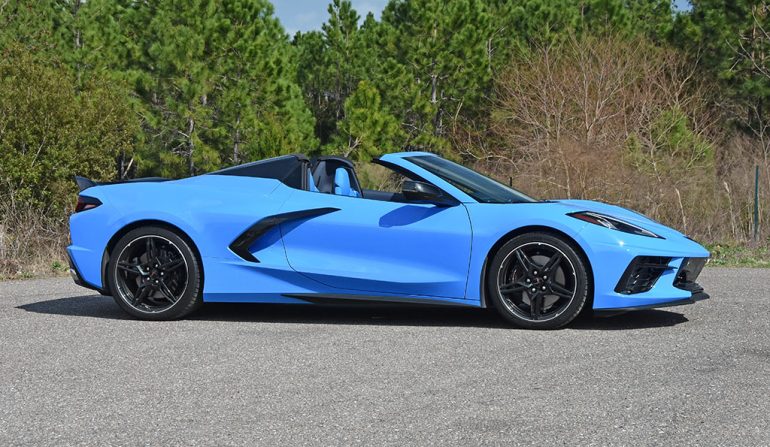 Expanding on my previous review of the new C8 Corvette, the Convertible flavor brings a new level of exoticness to the table. From the look of the roadster-like rearward headrests areas that flow into the body panels, to the rear power window, the Vette Convertible is America’s champion for top-down fun. The cabin is mostly unchanged from the Coupe with the exception of the rearward area. The coordinated color scheme is eye-popping and adds to the excitement of such an already-exciting mid-engine sports car. 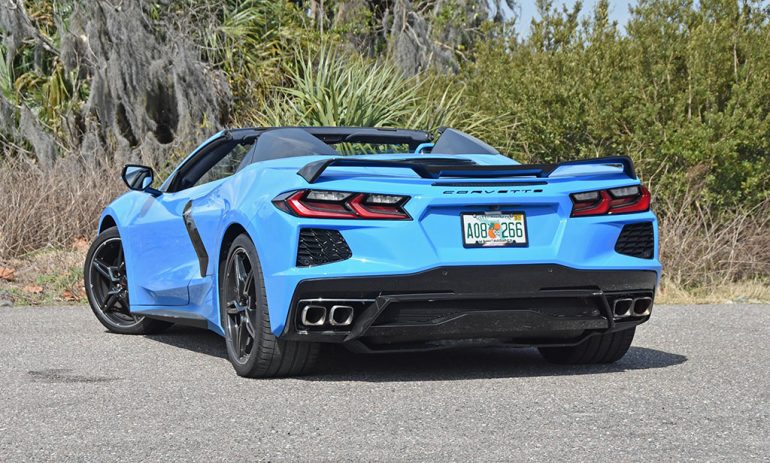 Another exciting characteristic of the Corvette Convertible is that it only weighs an additional 102 pounds over its “coupe” sibling, tipping the scale at about 3,637 pounds. I couldn’t feel that additional weight and my best zero to 60 mph time was 2.9 seconds, just a tenth off from my test in the C8 coupe. 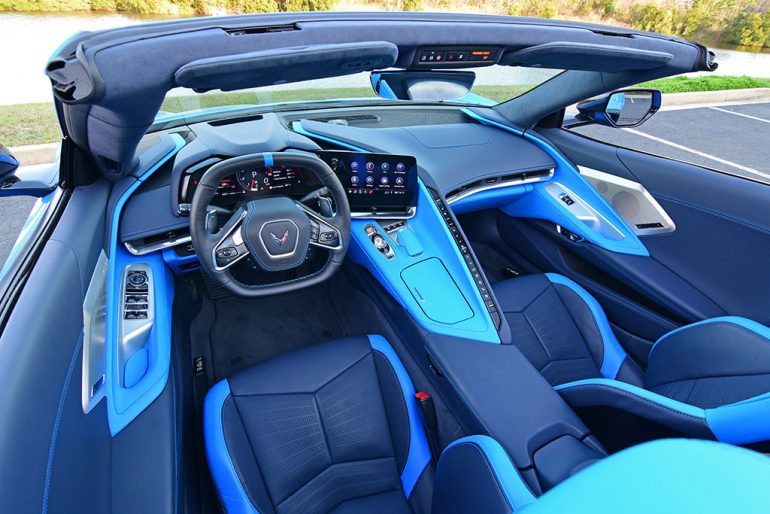 The throaty pushrod 6.2-liter V8 engine mounted low and behind the seats for a true mid-engine experience, is always happy to rev and produce its 495 horsepower and 465 lb-ft of torque, which has 5 additional ponies thanks to the optional Z51 package’s performance exhaust. The 8-speed dual-clutch transmission, as I said before, remains to have a Porsche PDK-like quality to its shifts. They fire off FAST, and they are seamless, just the way you want it to keep power surging through those meaty rear 305-patched 20-inch performance run-flat tires while the smaller 19-inchers up front give you a smidge of feedback through the unique near-squared-shaped steering wheel. 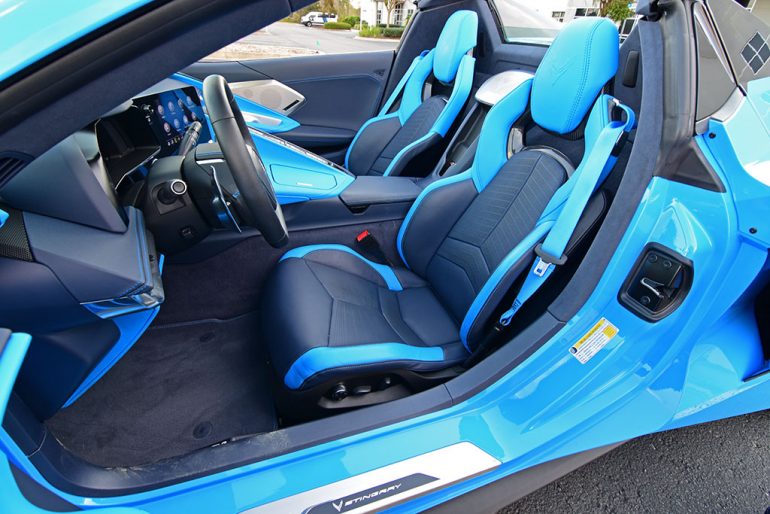 The Corvette Convertible doesn’t change much next to its coupe counterpart. The only thing I do miss with the Convertible over my test drive last year is the digital rearview camera feed, which shuts off because the rearward camera is mounted on the retractable hardtop roof. Otherwise, the Convertible is a seamless experience that allows you to retract or close the top when driving up to 30 mph. 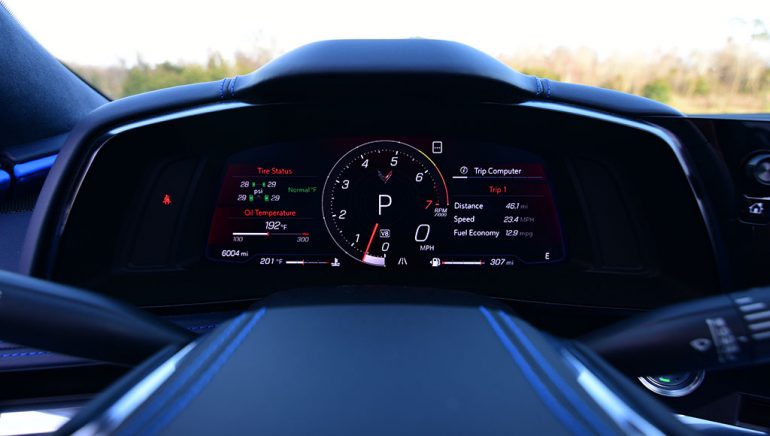 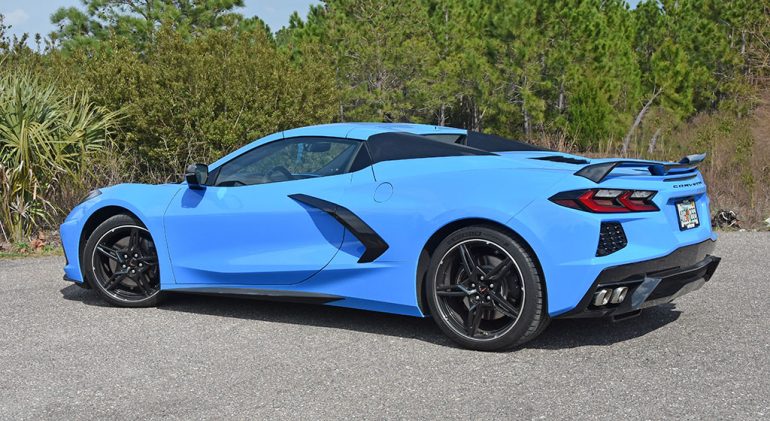 There are many other well-thought-out conveniences that make and keep the new Corvette a technological marvel, such as the downward-facing front camera with a dedicated button so you can monitor how close you park to a curb to prevent damage to the front splitter. There’s also a front-end lift system that can be programmed to automatically raise the front end at a set location. Lastly, the cylinder deactivation system for the V8 engine is tuned in a way to smartly activate a 4-cylinder mode and retain the selection when keeping a steady pace on the highway or low-speed roads to save fuel. Speaking of fuel, the Corvette is one of the most efficient vehicles of its type where you can achieve up its EPA-estimated 27 mpg on the highway in the real world. Laying into the enticing throttle often and you’ll easily get worse mpg than the EPA-estimated 15 mpg city figure. 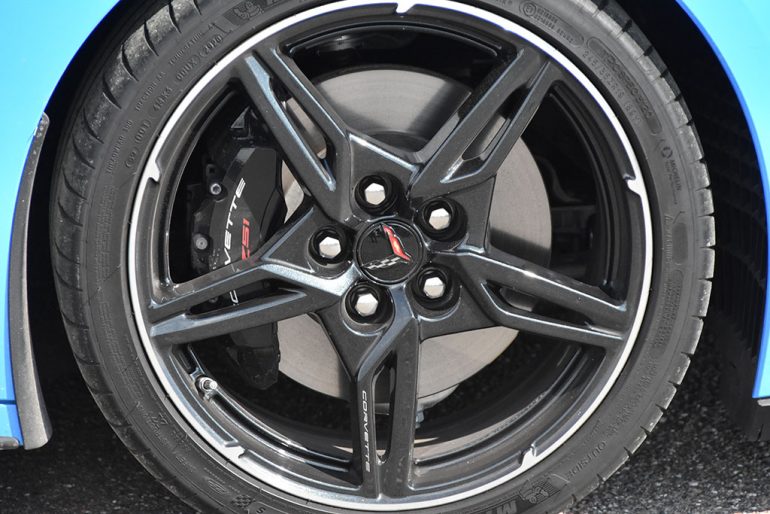 I don’t mean any harm in saying that if all of GM’s vehicles were as well-engineered as the Corvette, they would be a bestseller in a myriad of automotive segments. Also, to add, if there was ever a deal to be had in a performance vehicle, this is it. The new 2020-2021 Chevrolet Corvette C8 is the bargain of the decade in terms of performance for your dollar. My C8 Vette Convertible adds a bit to the bottom line, as you would expect any convertible. Still, you’re walking away with a near-supercar loaded up with a drop top for $90,775. Sign me up!