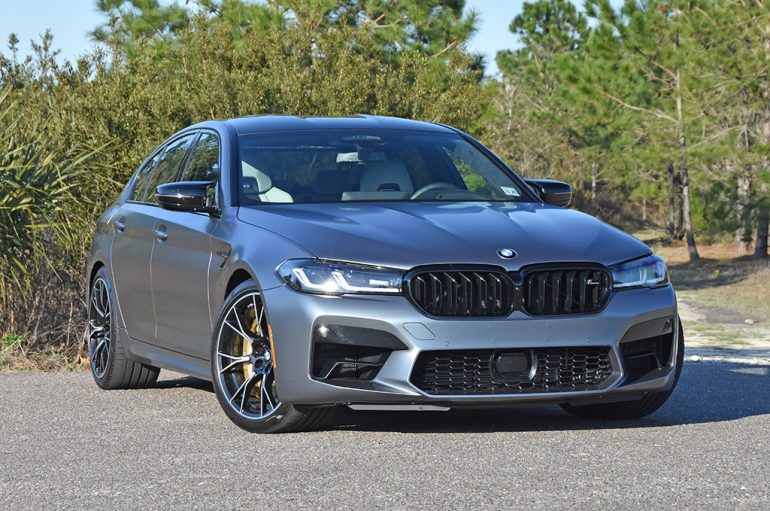 Sometimes, it just feels good to get back home after taking a long trip to somewhere foreign or unfamiliar. Recently, this week, it felt like a homecoming after getting a chance to experience what BMW has done with the new M5 for the 2021 model year considering I’m an avid BMW fan and owner.

The new 2021 BMW M5 in the top-tier Competition trim is among my favorite midsized performance sedan, probably my top 5 vehicles to drive for a review in the past few years. Saying such says a lot, pretty strong words considering I’ve driven hundreds of different cars in just the past few years. 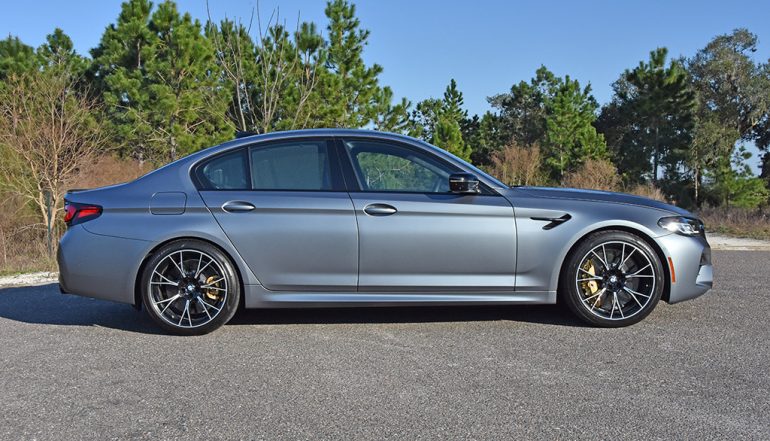 Powering the BMW M5 is the impressive 4.4-liter twin-turbo V8 engine that has been reworked in the M5 Competition to produce 617 horsepower and 553 lb-ft of torque, which is 17-more ponies over the “normal” M5. Of course, there’s not much “normal” about the BMW M5 even if it starts with 600 horsepower or has the bit of extra oomph to have 617 running-wild horses in the M5 Competition. 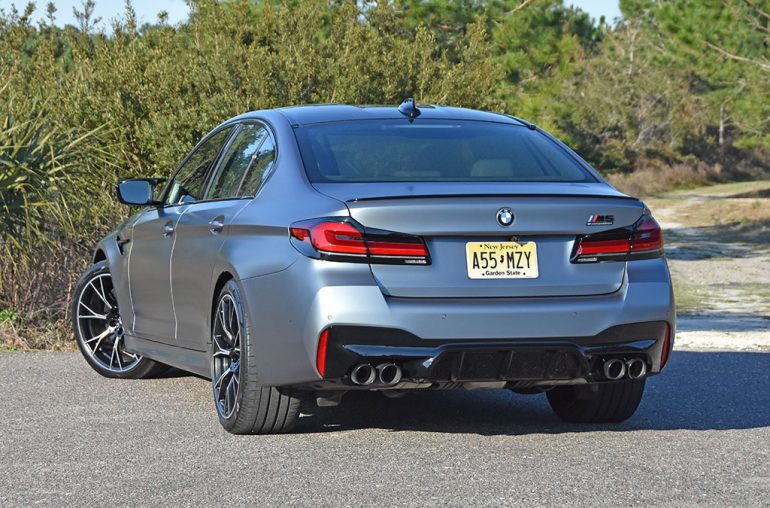 The powerful force-fed V8 gets mated to an 8-speed automatic transmission, a ZF unit that fires off shifts almost like an automated dual-clutch unit. The shifts are direct and there’s limited use of the torque converter making everything feel just as buttoned-down as the suspension system and its adaptive dampers firmed up in the Sport Plus mode. 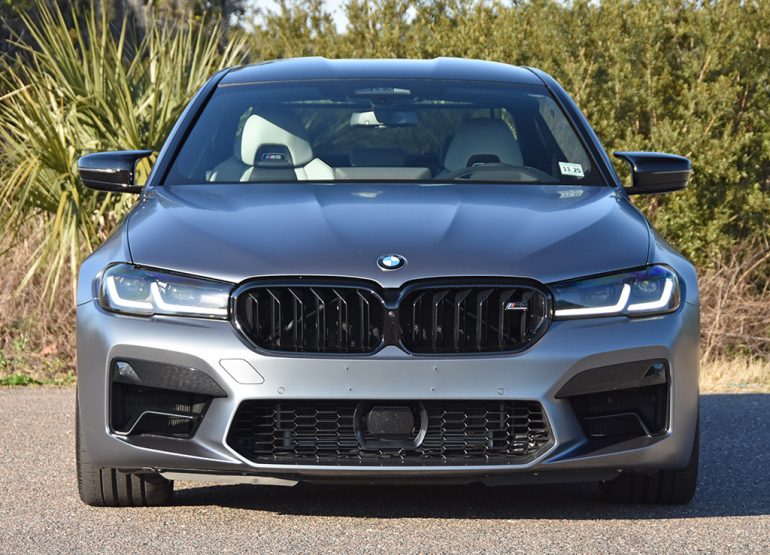 BMW has long been known for a unique driving experience and the new M5 is no different. In its buttoned-down feeling, the new M5 Competition feels somewhat light on its feet despite the curb weight of just over 4,200 pounds. BMW did their best in cutting weight as my loaded-up M5 Competition test vehicle has a carbon-fiber roof, forged 20-inch wheels, and the carbon-ceramic brake option that brings the beastly Bavarian road thrasher to a stop quickly. Also, for your stops at the pump, you’re going to pay a little extra as you’ll only manage to get about 21 mpg on the highway. I did get slightly better numbers, around 22.4 mpg – but what fun is that? I averaged about 16.7 mpg and often got worse than the EPA-estimated 15 mpg city figure stopping and going. I was happy about the fuel-conscious start/stop system now allowing you to disable it indefinitely so next time you started up the M5 Competition the start/stop system remained disabled. Yay BMW! 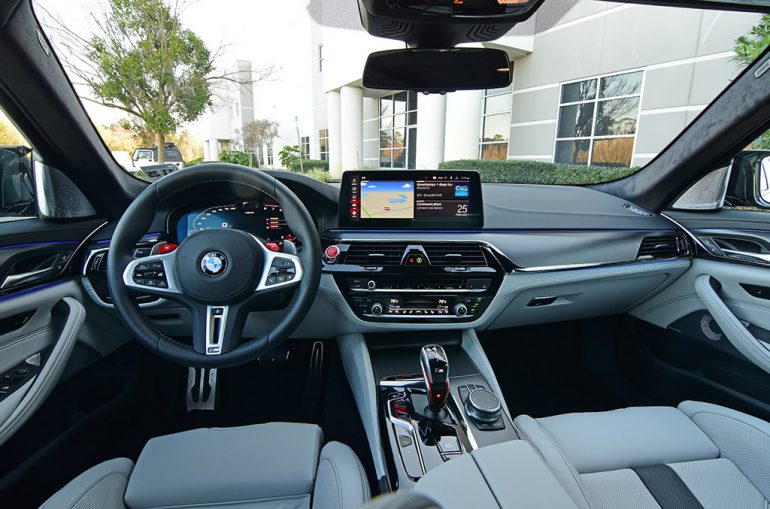 Turn-in with the adjustable-mode electric steering rack is spot on for the M5 and its size. Navigating back twisty roads is a joy and the M5 never feels out of place in being a sedan of its stature. The ample power transmitted through all four wheels via a rather intelligent all-wheel-drive system keeps all four of the Pirelli P-Zero performance tires firmly planted without much drama. The tire patch being 275 up front and 285 out back may not seem like enough rubber on the road for over 600-horsepower. However, the size is just right as you sometimes feel the front wheels step out over the rears during initial acceleration out of a turn. Otherwise, the AWD system sorts things out to give the rear the bulk of the power while you contemplate pressing your programmable M1 or M2 steering wheel button or manually enable Two-wheel-drive after fully disabling stability and traction control. The two-wheel-drive mode is when things get even more interesting as the rear wheels will easily light up in plumes of smoke and it’s just you, the road, and all that the M5’s heart-pounding V8 has to offer. You better be on your A-Game because that 50/50 weight balance can be your friend or worst enemy in the blink of an eye. If you’re keeping things in a straight line, you’ll enjoy the thrust of the M5 Competition in enabling launch control and reaching 60 mph in just 2.8 seconds. Yup, 2.8 seconds is my best time – this thing cooks and it shows with the giggles of my family from the back seat. 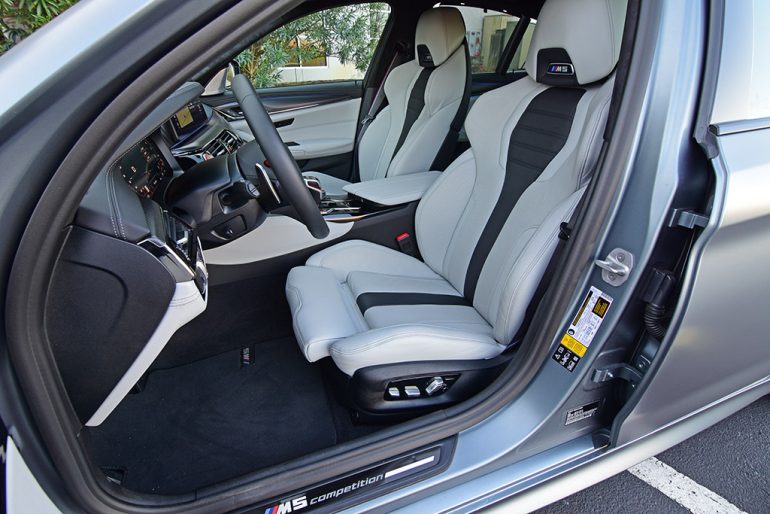 Where your time is spent in the cabin of the new M5 Competition you could easily forget the sheer power of such a vehicle while sitting in the comfy but supportive perforated Nappa leather seats. Also, the driver and front passenger can enjoy a massage with heating or ventilation while wearing a smirky facial expression in knowing you’re in one of the fastest sedans on the road. There’s plenty of luxurious cues throughout the cabin, including the Aluminum carbon structure trim and bountiful amounts of soft Silverstone-colored leather throughout the lower dashboard. Other subtle touches that set the new M5 Competition apart from the rest of the lineup are the M-Motorsport colors stitched in the seatbelts along with the proper darkened exterior trim treatments. 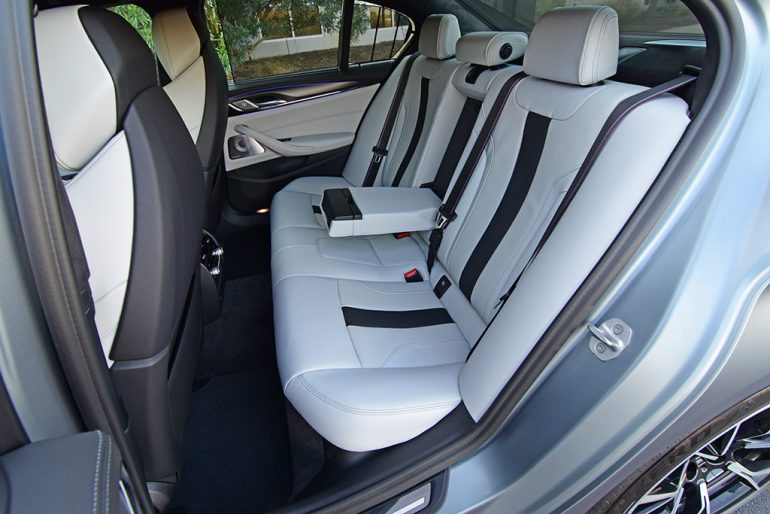 Being that the 2021 BMW 5 series was refreshed for the model year, the new M5 Competition proudly wears some of those updated elements found in the remarkably-bright LED laser headlights, reshaped LED taillights, and a respectably-sized updated front grille that doesn’t follow the same polarizing elongated theme as some “other” new BMWs. 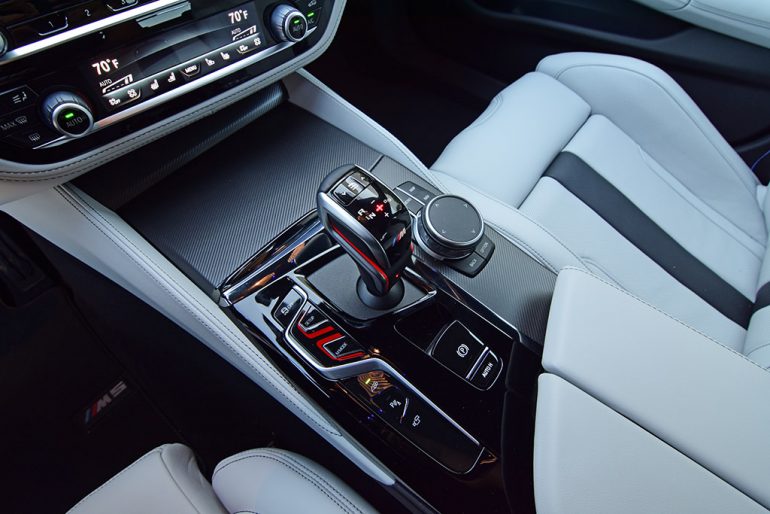 In the area of tech, the new M5 brings an updated iDrive system that plays on small menu updates to avoid complicating things. However, I will say that BMW may have gone in the wrong direction here as the drive modes and separated drive settings seem to be a bit jumbled as a “sport” and “track” drive modes seem to layer your preferred settings instead of totally replacing them. In a way, it’s kind of a mess and I wish BMW would have kept it more simplistic as many fans of BMW M vehicles may find the system to be too deep with the settings and nothing is quick about enabling launch control, which requires too many steps. By the time you get to a point to enable launch control, which is ridiculous FUN (because 0-60 in 2.8 seconds), your passengers would have pulled out their cell phone to surf the web and lost interest. 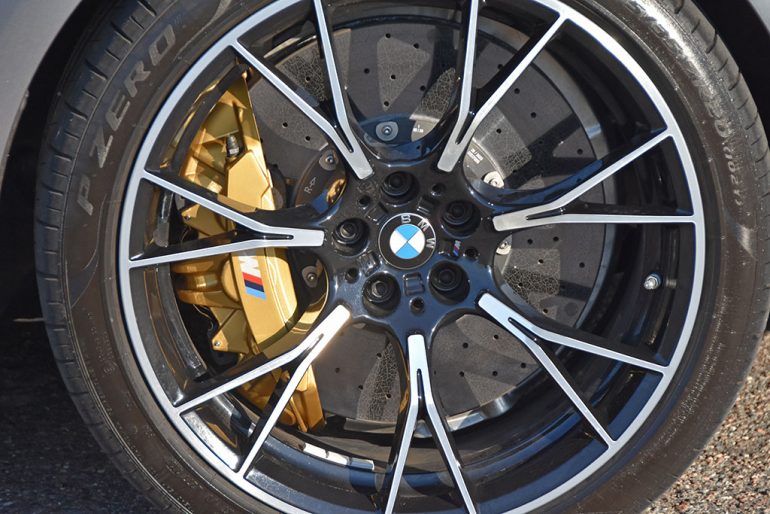 The benefit of BMW’s latest updated iDrive system is that the connectivity of wireless Apple CarPlay is improved without an additional fee and the voice prompt integration controls a plethora of vehicle features. All you have to do is say “Hello BMW” and the voice prompt will fulfill your BMW dreams – sort of. Or, you can just reach up to the 12.3-inch touchscreen and make your selections, or just below the screen adjust the climate control via dedicated physical buttons, turn-knobs, or activate the seat heating/ventilation via color touch-capacitive buttons. 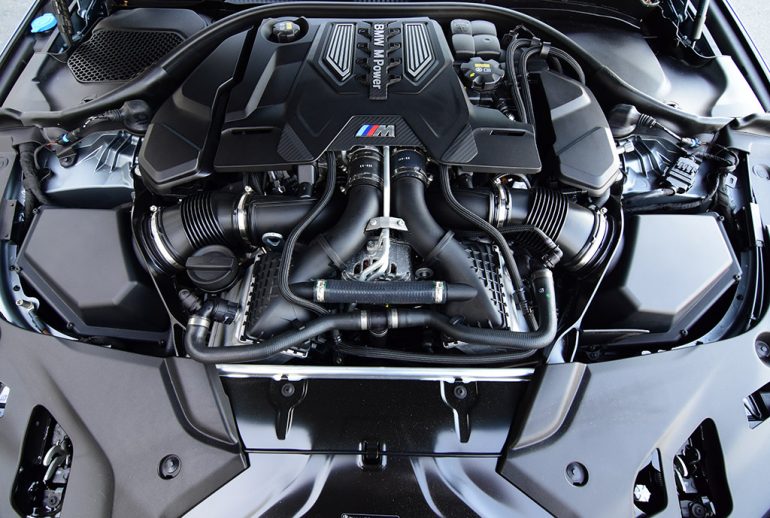 In my experience with the new BMW 5 series in having the M550i just a few weeks back, the M5 Competition is surprisingly a huge departure from the M550i, such a depart that the M5 seems like it’s a distant cousin instead of a sibling. Also, the price of the M5 Competition further brings home such a notion, tipping the pricing scale to the tune of $139,645 as-tested. Is it worth such a price? Absolutely – you gotta pay to play and the new M5 Competition lets you do just that… it legitimately plays with the big boys and exotics, only it touts family-and-friend-friendly four doors. I’m sold!