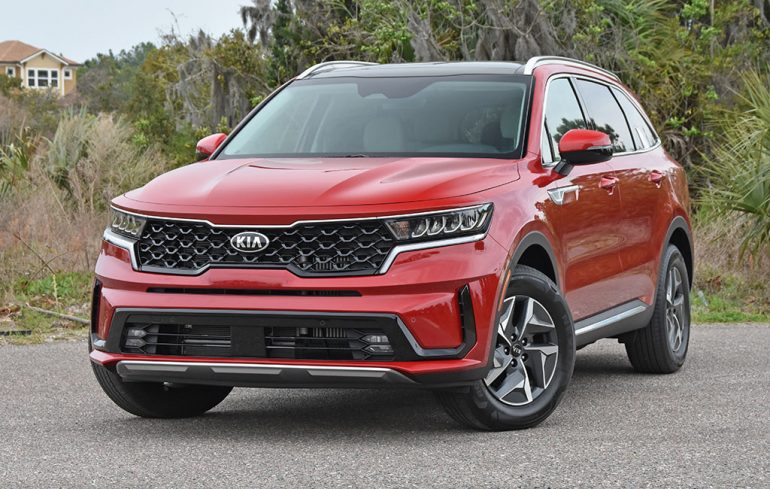 Let’s face it, there’s a strong force within the automotive industry to move towards electric vehicles. Until the move shifts into a higher gear, we have many vehicles to tide us over for the next 10 to 15 years until EVs become a commonality. Within those vehicles to keep us happy, there are many hybrid offerings in many forms, such as the newest 2021 Kia Sorento Hybrid that I had the chance to check out this week.

Kia has undoubtedly come a long way from their earlier years of first showing up on American shores. Since then, under the extended brand families, Kia has become a nearly limitless force in the automotive industry. The new 2021 Kia Sorento, among many other crossover utility vehicles from Kia, has shown just how serious the brand is in recent years. On the spectrum of hybrid vehicles leading towards our forthcoming world of EVs, Kia is making some headway with vehicles like the new Sorento Hybrid. 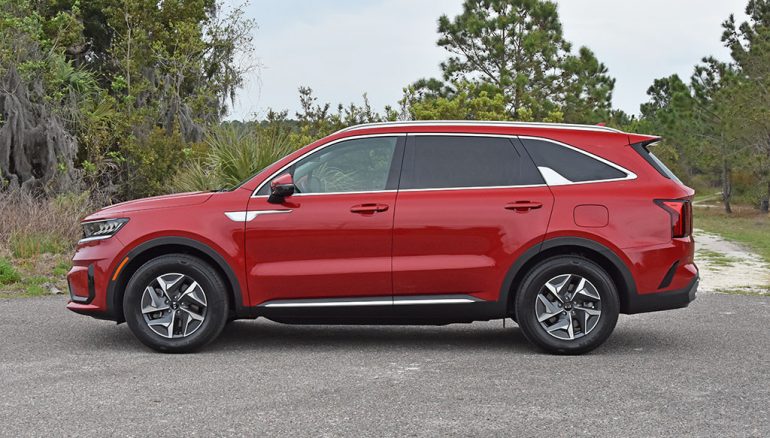 The new Kia Sorento Hybrid comes out of the redesigned Sorento for the 2021 model year which embodies an attractive new look and three-row seating capacity. The surprising aspect of the 3-row crossover is that it delivers on its EPA-estimated fuel consumption figures in the real world and decent performance through what I have experienced in my week-long test. Moreover, the new Sorento expands upon its size to virtually elevate its versatility above its competitors by offering three-row seating. However, the 3-row seating in the new Sorento is a clear sacrifice of cargo room when all of the seats are up and in place. There’s hardly any cargo room behind the third-row, which forces those who take trips to fold them down to increase the 13 cubic feet to much more usable space, as much as 75 cubic feet with both the second and third-row folded down. The Sorento Hybrid only offers a 6-passenger setup where the second-row bench seat is reserved for the non-hybrid Sorento. 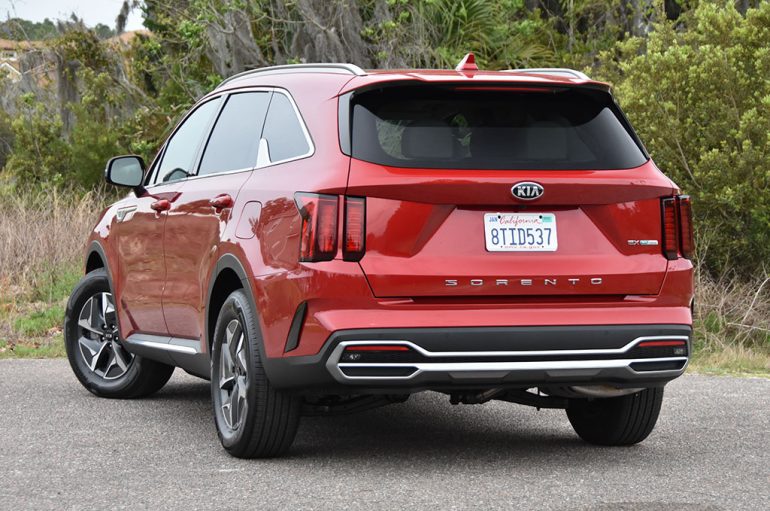 The 2021 Kia Sorento Hybrid is powered by a 1.6-liter turbocharged 4-cylinder engine paired with an electric motor that sends power to a 6-speed automatic transmission before it reaches the front drive wheels. Unfortunately, there is no all-wheel-drive option available – something I would have liked to have seen here due to the front-wheel-drive setup being a little unseated under hard acceleration from a turn. The powertrain puts out a combined 227 horsepower and has a healthy dose of 258 lb-ft of torque. That’s enough grunt to get the Sorento Hybrid up to 60 mph in about 7.9 seconds, which isn’t terrible considering the hybrid aspect of a vehicle that’s nearly the mass of midsized crossovers. 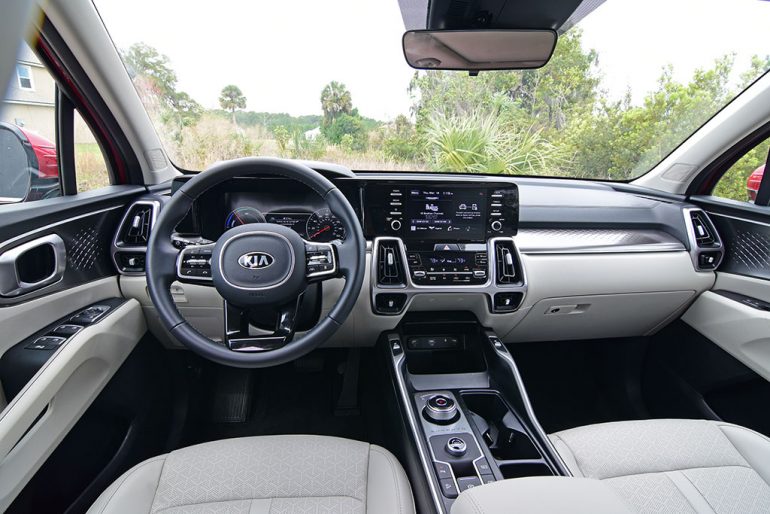 Driving the Sorento EX Hybrid is nearly a seamless experience with the engine and electric motor transitions taking place smoothly and the computer sorting out the best method of prolusion to save on fuel. Speaking of saving on fuel, the Sorento EX Hybrid does excellent to hit and sometimes best its EPA consumption figures of 39 mpg city, 35 mpg highway, and 37 mpg combined. If you’re at all inclined to how the hybrid system operates, you can manage to muster out about 44 mpg in the city over a span of about 32 miles as I did manage to keep pace with speeding traffic. The system is about on par with what Toyota offers but suffers from occasional hiccups where the power delivery is delayed upon throttle application. I found this slight hiccup to be upsetting at times where I needed to jump out in traffic and the system was slow to engage as if it could not decide to fire up the gas engine for the extra power needed to accelerate quickly. Apart from such an issue and the low towing capacity of 2,000 pounds (1,500 pounds less than the nonhybrid models), the Sorento Hybrid is compliant and has a smooth ride quality partly thanks to the large sidewall all-season tires wrapping the 17-inch wheels. 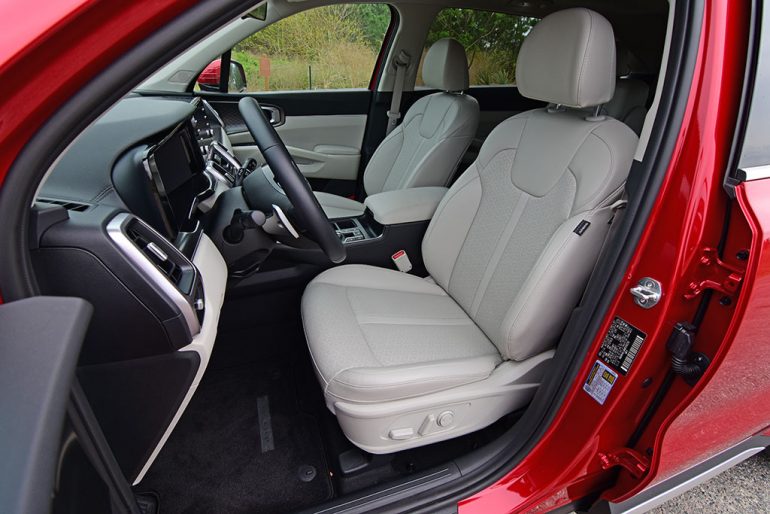 The Kia Sorento Hybrid not only shines with its economical fuel consumption numbers but it has a merit of standard and available features, such as the highlighted ones of wireless Apple CarPlay and Android Auto integration – both fed through an 8-inch touchscreen infotainment system, heated front seats, 17-inch wheels, LED headlights, LED foglights, dual-zone automatic climate control, blind-spot monitors with cross-traffic alert, lane-keeping system, forward collision mitigation and warning, adaptive cruise control, panoramic sunroof, and simulated leather upholstery. There are just two trim levels for the Sorento Hybrid, the base S trim and the EX trim as found on my test vehicle, which includes all of the features previously mentioned. 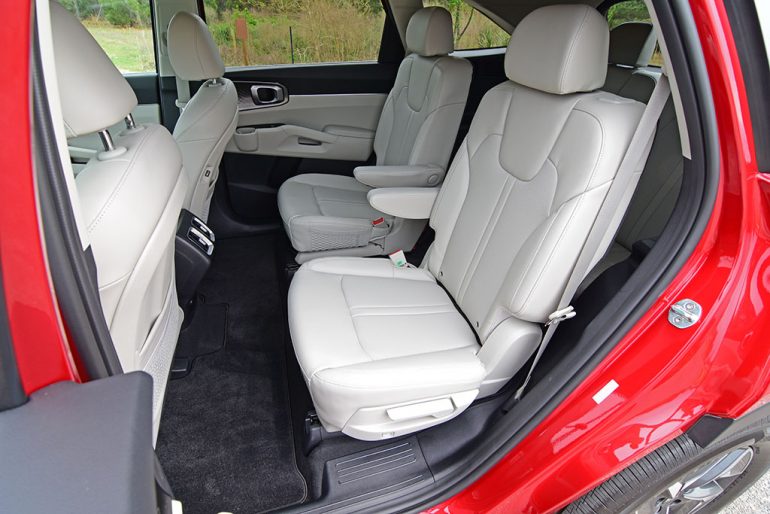 The interior has a nice premium touch to the overall aesthetic with plentiful soft-touch areas and comfy seating, which only permits 6-passengers for the Sorento Hybrid. If you wish to opt for a 7-passenger setup with the second-row bench seat, you’ll have to look at the non-hybrid Sorento, which will only get as much as 24 mpg city and 29 mpg highway with the base 2.5-liter 4-cylinder. The more powerful 2.5-liter turbocharged 4-cylidner engine with 281 horsepower and 311 lb-ft of torque will yield nearly the same fuel estimates at 22 mpg city and 29 mpg highway. 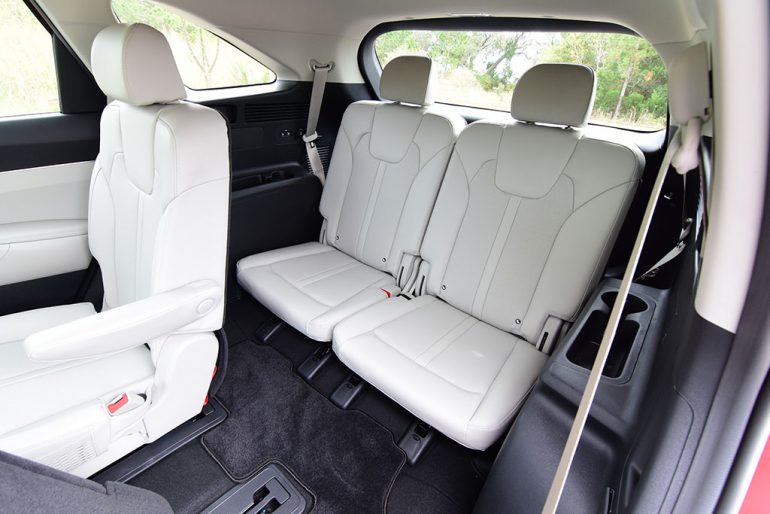 In all, the Kia Sorento Hybrid is a good choice for those who want the extra MPGs starting at a price of about $34,000 for the base S Hybrid trim but quickly moving up to the as-tested price of my test vehicle for the week of $38,205. A loaded-up non-hybrid Sorento SX Prestige trim will set you back about $40,590 without the handling and freight fee ($11,70) for comparison, which adds many additional features that cannot be had on the Sorento EX Hybrid (such as 20-inch wheels, 12.3-inch digital instrument cluster, 10.25-inch infotainment touchscreen with Navigation, leather trim seating, surround view and blind view monitors, and the more powerful turbocharged engine. 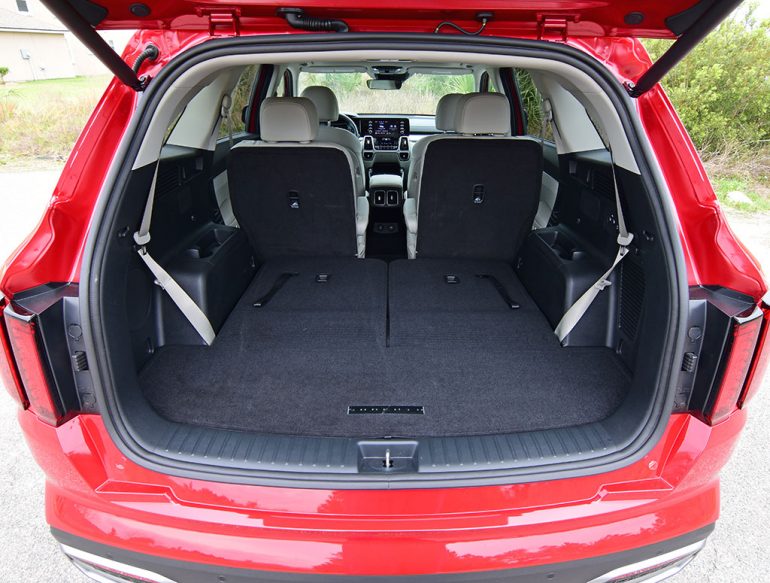