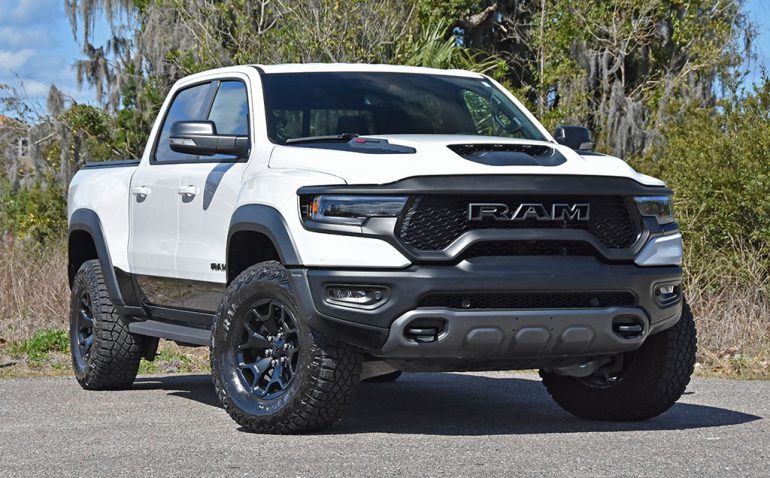 When it comes to trucks, RAM has paved a somewhat unique path in giving us something a little plusher yet rugged enough to conquer all that you would throw at a pickup truck. As pandemonium starts to set in as we all witness history take place with the emergence of new hybrid and electric vehicles (EVs), RAM, or the Stellantis (formerly FCA) parent company, stuns everyone by taking their hellcat engine and stuffing it in the RAM 1500 to birth a monster in the form of the TRX.

The RAM 1500 TRX, or T-Rex, has just about every enthusiast intrigued with what could very well be the beginning of the end of an era of gas-guzzling beastly V8 engines. While we have such a potent combination in the all-new RAM TRX, let’s enjoy it while we can, all 702 ponies of it and its raw off-roading capabilities. 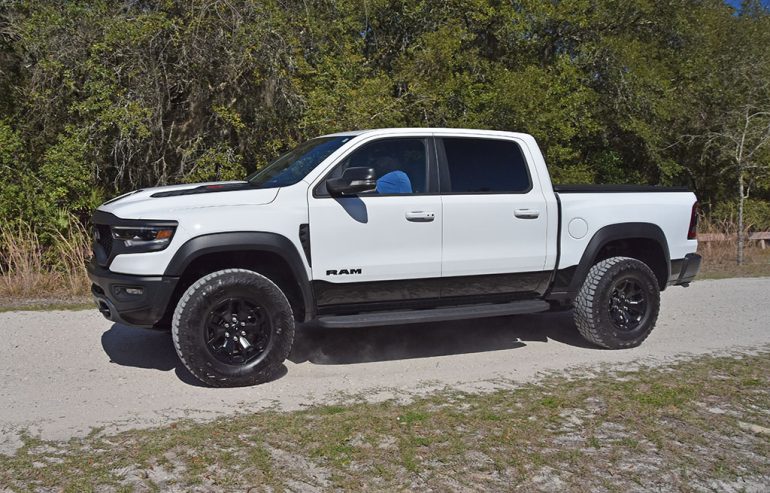 Wrapped up in the RAM 1500 package we find the TRX to embolden many aspects of the formidable pickup truck. Starting with the engine, the infamous 6.2-liter supercharged HEMI V8 that pumps out an earth-moving 702 horsepower and 650 lb-ft of torque. That power is then directed to an 8-speed automatic transmission before it gets distributed through all four 35-inch tires that wrap 18-inch aluminum wheels with an available beadlock. The 35-inch Goodyear Wrangler all-terrain tires are surprisingly smooth and rather quiet out on the road but really shine when you take the TRX off-road tackling sand dunes and some gravel trails with no problems during my week with this fierce machine. 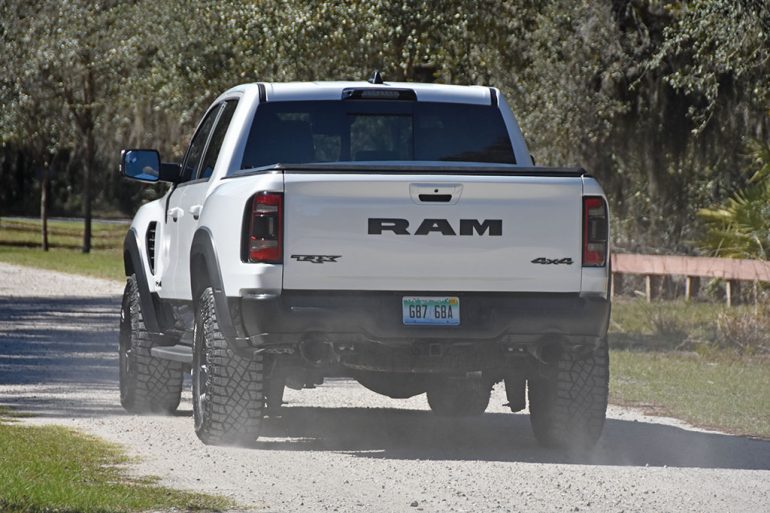 Speaking of fierce, the RAM 1500 TRX proudly wears its badging and expands upon its menacing demeanor with several hidden easter egg “monikers” using a T-Rex dinosaur image devouring a Raptor. Of course, such an image is a play on the TRX being above the Raptor among the extreme truck food chain – and that it is. Ford did well with the F-150 Raptor but the TRX elevates things not only by its hellcat powertrain, but it does it with a more compliant ride quality out on the road and a suspension system setup that may be a hair above in capability with 11.8 inches of ground clearance. Fundamentally, the TRX rides better than the F-150 Raptor but suffers from a bit of extra weight that you can really feel in the way the TRX turns in. The Bilstein Black Hawk e2 shocks are claimed to be among the most sophisticated for a production truck fresh off of the factory floor. Their adaptive damping and drive-mode settings make for an adaptable drive whether you are “quickly” commuting to work, tackling rough flat terrain, or jumping dunes in the exclusive Baja mode, the shocks are well up to the task. Moreover, the tow mode permits the TRX to have a more stable rear end by setting the shocks on a full dampening mode so you can feel a little better about pushing it to its towing limits near its max of 8,100 pounds or haul 1,400 pounds of payload. 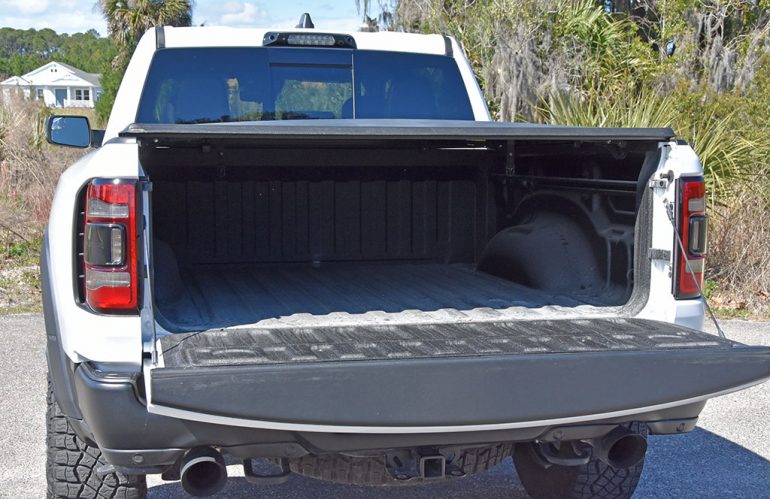 In the realm of sheer performance, RAM left no stones unturned – as far as a truck of this caliber goes. There’s nothing that can touch the RAM TRX, right now. It gets up to 60 mph in just 4.5 seconds and covers ground like many well-to-do sports cars. The only drawback, again, is its heft, all 6,396 pounds, that tends to remind you of what exactly you’re driving even though you have 702 horsepower at your beckon. 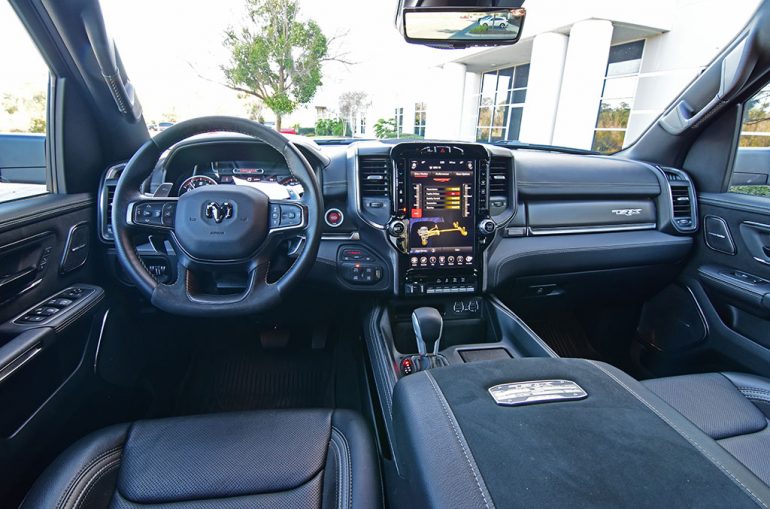 For all of that power to work without fail, there are other unique characteristics of the TRX that standout, such as the flared fenders with vents, the large front grill with hollowed-out “RAM” letters to let in that extra bit of cooling air along with the functional hood air intake scoop with amber identification lamps. There’s also a “racing” cooling program within the extensive TRX performance pages displayed on the 12-inch portrait-oriented infotainment touchscreen, which is similar to that found on the TRX’s Charger/Challenger Hellcat siblings. 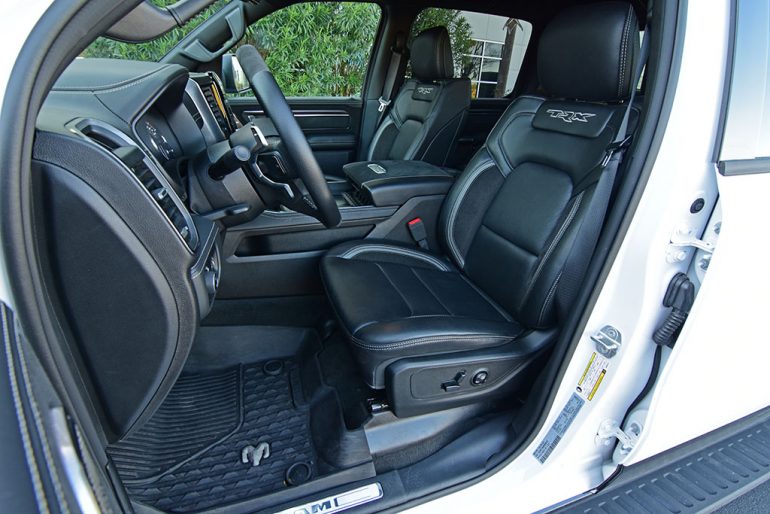 Every time I start up the RAM TRX it extends my morning workout routine by working my face muscles for the ear-to-ear smile on my face. That smile remains throughout the drive with the exhaust growl and delightful supercharger whine, which is somewhat unique to the TRX instead of replicating the soundtrack of the Charger/Challenger Hellcats. The only time my smile goes away is visiting the gas station several times as the RAM TRX proves to be the thirstiest non-exotic vehicle I’ve ever tested. I averaged about 11.3 mpg during my week and was able to get nearly 14 mpg on the highway and as low as 8.9 mpg in the city having a little fun. Fortunately, the fuel tank is massive at 33 gallons, so fill-ups aren’t as often. 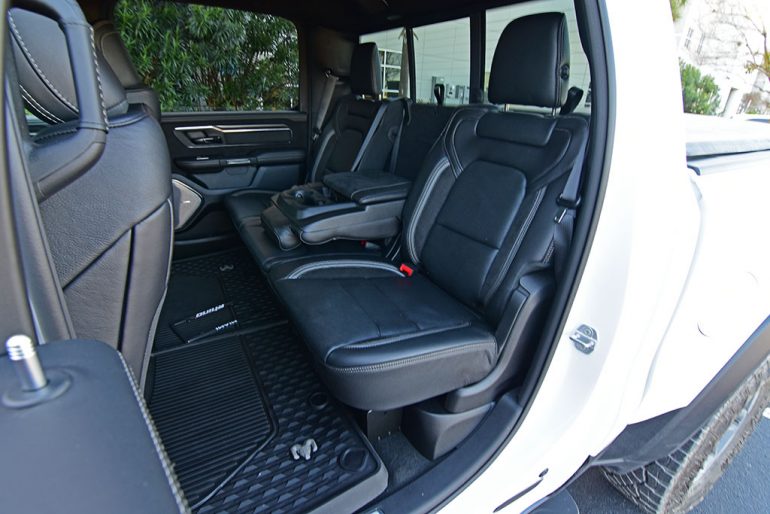 Apart from the expected ruggedness and unsurpassed capability of the RAM 1500 TRX, there’s a rather plush cabin that mostly fits the TRX’s menacing theme. Though, the cabin still plays into what RAM has done with the upper trim levels of the 1500 for the past few years, and that makes it the most luxurious truck you can buy. The luxury part of the TRX, which some may think is an oxymoron, plays nicely with the multi-purpose use of the TRX. There are very comfy and supportive front leather-trimmed seats with “TRX” embroidering. The front and rear outboard seats are both heated and ventilated with the proper folded-under-bottom storage areas. There are additional floor storage cubbies out back near the door along with the expected power tailgate release to access the spray-lined bed. 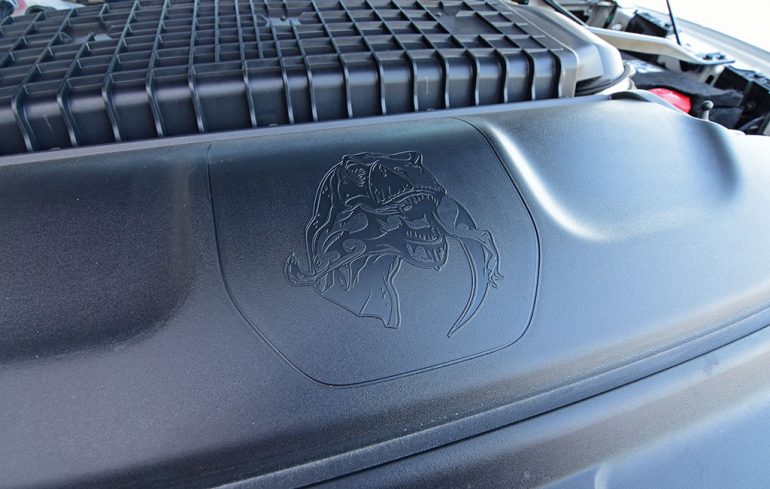 The main focal point of the RAM 1500 TRX being the large 12-inch portrait-style infotainment screen adds to the premium appeal of the interior along with nicely integrating Apple CarPlay, Android Auto, and a slew of customization options. As part of an extensive TRX Level 2 equipment group option package ($7,920) and several other available package additions, my test vehicle includes a color heads-up display, rear-view digital display mirror, carbon fiber trim, adaptive cruise control, lane keep assist, blind-spot and cross-path detection, and a 19-speaker Harmon Kardon audio system to round up many of the highlighted options. 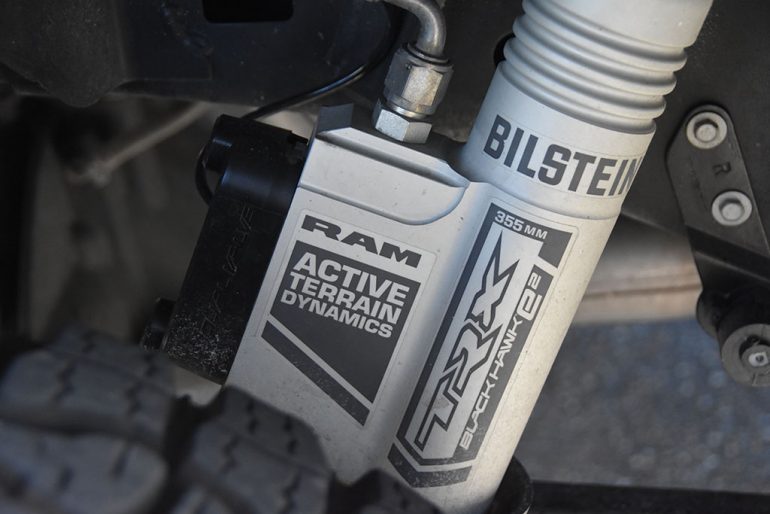 While the use of the latest Uconnect is simplistic and well-thought-out with extensive feature sets, the surprising issue I found was the center console plate that has the unique specs of the TRX engraved in it – the darn thing gets hot in the sun and you literally burn your arm on it if you’re not careful. I happen to have burned myself a few times but eventually, I learned my lesson. RAM could have placed this clever metal badge in another location. You don’t place a metal plate on the otherwise plush Alcantara-like armrest! 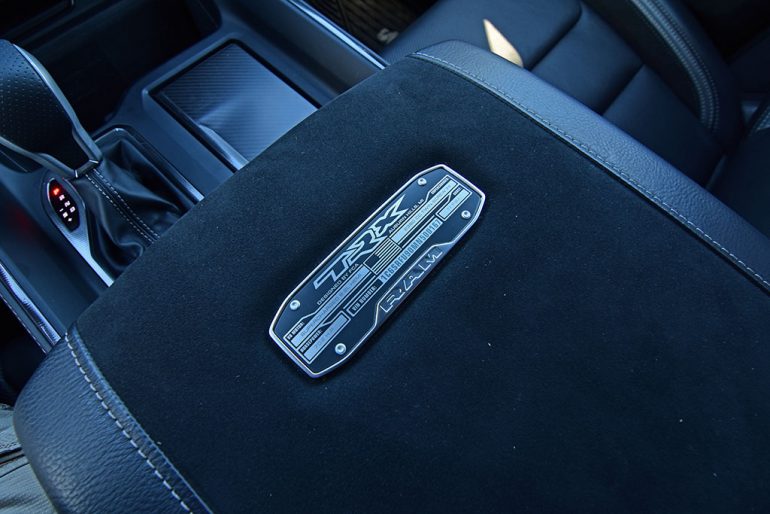 I give RAM all the kudos for building such an extreme truck, which is partly an answer to its direct competition. The RAM Rebel wasn’t enough to conquer all, so RAM had to go out and create a T-REX and set it loose. We’ve all seen the ‘dinosaur’ movies and know what happens. The only hurdle here is to get admission to such a movie – you’re going to have to pay up to the tune of about $87,170 (plus the selfish-dealer markup) if you want an example of the TRX you see here in my nicely equipped, but not “fully” loaded, test vehicle. A stripped TRX starts at $69,995, which you can’t find on dealer lots. Maybe I can get the matinee discount by paying full MSRP because it’s certainly worth it!