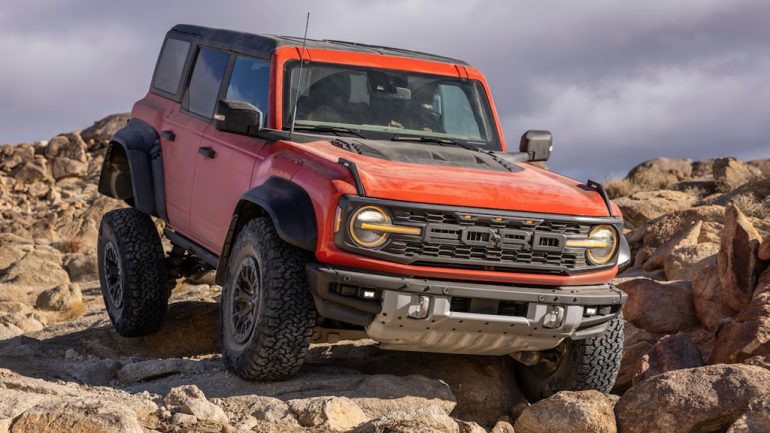 We knew it was coming, Ford’s answer to the Jeep Wrangler 392 V8 HEMI, the all-new 2022 Ford Bronco Raptor. Touting much more power thanks to a reworked version of the brand’s 3.0-liter twin-turbo V6 that will *produce over 400 horsepower and over 400 lb-ft of torque mated to a 10-speed automatic transmission. Ford hasn’t finalized the horsepower figures just yet but we guess these figures could be close to what we see very soon thanks to the Ford Explorer ST/Lincoln Aviator-sourced twin-turbo V6 engine (400hp/415 lb-ft torque).

The potency of the new Bronco Raptor doesn’t stop with its new engine but follows through with 37-inch tires, a removable hardtop, 13.1 inches of ground clearance, a new boxed frame and shock towers for its Raptor HOSS 4.0 race-ready suspension with Fox shocks, maximum wheel travel of 13-inches front and 14-inches rear, all in a 4-door SUV package – the only configuration it will come in. Ford’s use of the longer 4-door wheelbase and a removable hardtop is part of an act for torsional-rigidity that’s increased over the normal Bronco trims thanks to C-pillar carbon-fiber center reinforcements that reduce weight, along with the welcomed stability of such a wheelbase. 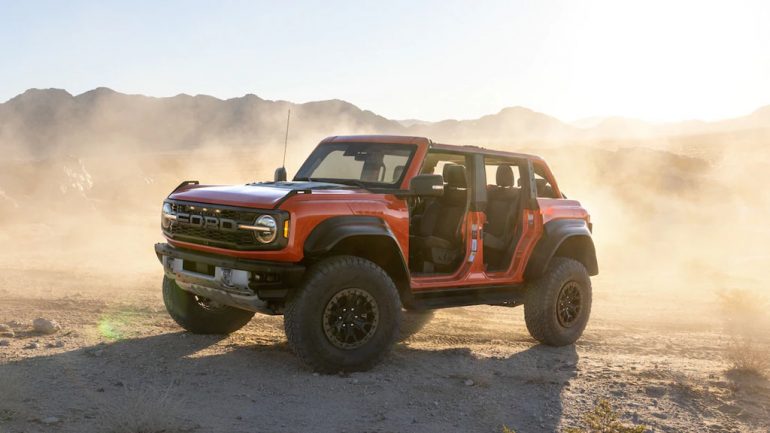 Even though the new Bronco Raptor was more of an afterthought, development and engineering didn’t take a back seat as Ford was dedicated to making something great for off-roading. “We poured all of our passion and all of our Bronco and Raptor know-how into creating this absolute desert-racing beast,” Ford president and CEO Jim Farley said in a release. “It’s the real deal. It’s not for show and it’s not for everybody. But for people who love to get out in the wild, it’s the ultimate.” 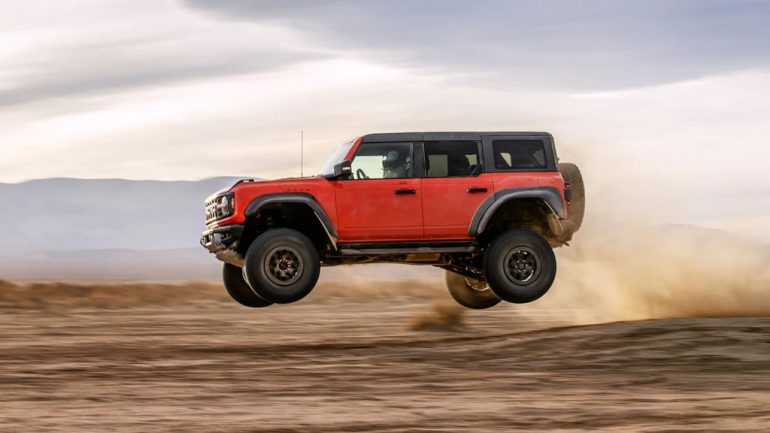 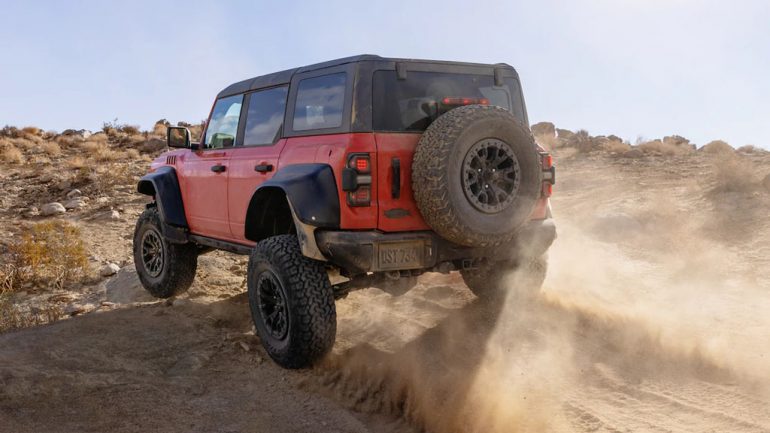 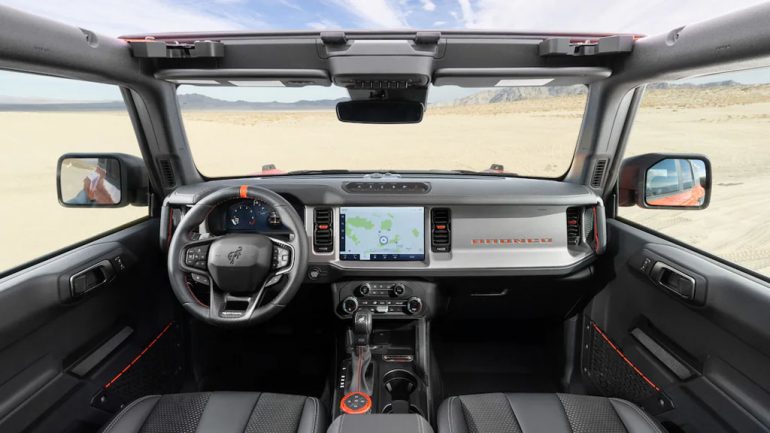 Towing capacity is slightly increased on the Bronco Raptor versus its downstream trim levels touting the capacity of 4,500 pounds. The 1,000 extra pounds of towing capacity is unlocked through an added G.O.A.T. drive mode, a seventh tow/haul mode in addition to the same modes found in other Bronco trims. 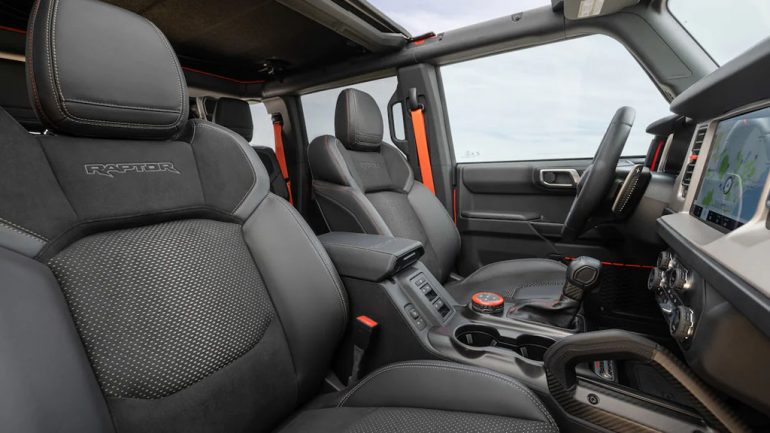 With about 80% of Bronco Raptor owners expected to take them off-road, Ford has given the wild SUV the proper off-roading chops and power to conquer just about anything you would throw at an off-roading vehicle all without a V8 engine. A V8 engine would have been a challenge to fit in the engine bay of the Bronco and Ford’s already done well with their force-fed V6 engine’s in the past with the F-150 Raptor, so it only makes sense here. 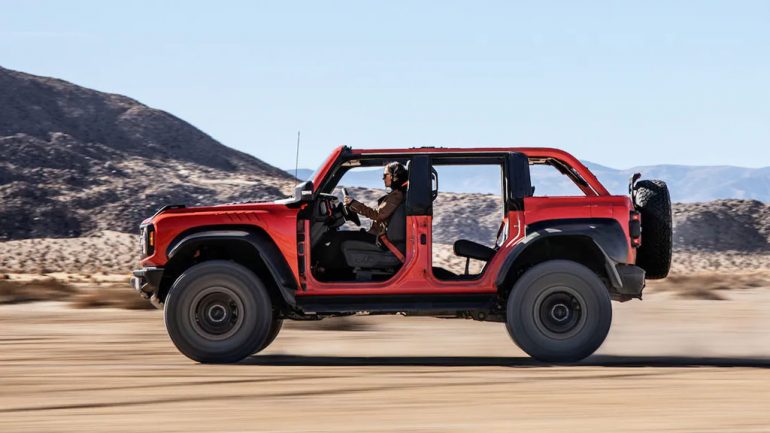 The price for the new 2022 Ford Bronco Raptor starts at $69,995 and orders will start in March just before deliveries are set for this summer. We are certain many Ford dealerships may place hefty markups on the new Bronco Raptor unless Ford steps in to curtail such foolishness as they have with vehicles like the new F-150 Lightning. Not to mention, we could very well be seeing the last generation of Raptorized vehicles from Ford that doesn’t use some form of an electric motor. Better keep an eye out for those ordering banks to get one of the last Raptors before they become extinct.