Intersection Wrecks: How To Get Justice? 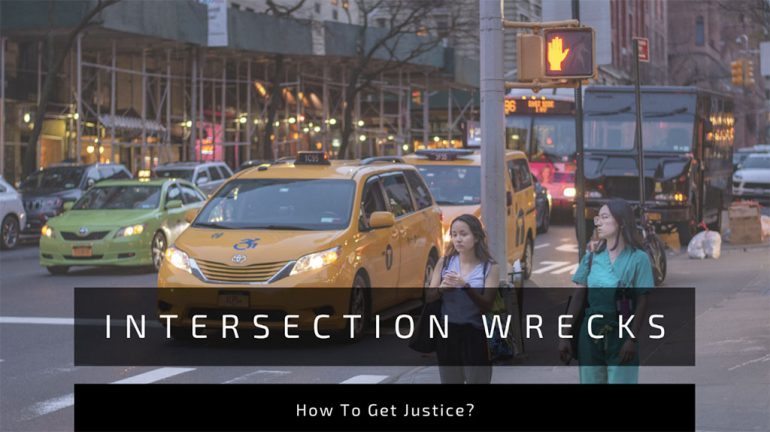 Watch for drivers not watching out for you.

You’re walking down the street, headphones in, minding your own business when you hear the screeching of tires and a loud thud. You see a car speeding away and a person on the ground. This is a scene that plays out far too often on city streets. To reduce these accidents, it’s important to be aware of drivers who are not paying attention to their surroundings.

At intersections all around the United States, drivers are crashing into each other. These collisions occurring in intersections often lead to injuries for those involved. Many of these accidents happen because one or both drivers were not paying attention to their surroundings.

What is an intersection wreck?

Intersection wrecks are a common occurrence and often result in serious injuries. These accidents happen when drivers either do not see other cars stopped at the intersection or underestimate the speed of oncoming traffic. As a pedestrian or cyclist, it is important to be aware of these dangers and take steps to protect yourself.

If you are involved in an intersection wreck, it is important to seek medical attention immediately. Even if you do not believe you have been wounded, it is advisable to see a doctor. Once you have been treated, you may want to consider talking to an attorney about your case. Frequently, collisions in intersections are the driver’s fault. This can be proven by witness statements or evidence from the accident scene.

Why do intersection collisions happen?

In 2015, over 2,000 people were killed and over 175,000 injured in intersection collisions. These wrecks can be incredibly dangerous, as they often involve multiple vehicles and high speeds. To stay safe while driving through an intersection, it is important to be aware of the common causes of these crashes.

How to get justice if you are involved in an intersection wreck?

Intersection wrecks can be particularly dangerous because of the high speeds of vehicles and the limited visibility that is often present. Drivers need to be aware of avoiding these accidents and know how to react if they find themselves in such a situation.

If you are hurt in an intersection wreck, you may be entitled to compensation for your injuries. You will need to prove that the other driver was at fault to get justice. It probably won’t be easy, especially if the other driver denies responsibility.

Here are some tips for getting justice if you are involved in an intersection wreck:

How to avoid an intersection collision?

It is important to be aware of your surroundings and use caution when approaching and navigating intersections when driving. Intersection collisions occur frequently and often result in serious injuries. Be especially careful when making left turns, as these turns are responsible for many intersection wrecks. If you see another driver who does not seem to be paying attention, do not hesitate to take evasive action.

By following a few simple tips, you can help reduce your chances of being involved in an intersection collision:

After being involved in an intersection accident, you must take the necessary steps to ensure your safety. First and foremost, make sure that you are not seriously injured. If you are, then seek medical attention right away. Once you have made sure that you are safe and uninjured, gather as much information about the accident. This includes taking photographs of the scene, gathering witness statements, and obtaining contact information for other drivers or pedestrians involved in the accident.

If you can, try to move your car out of the way so it doesn’t hold up traffic. If there is an emergency crew on the scene, adhere to their instructions. Finally, remember that it is always important to be aware of your surroundings when driving, especially at intersections.