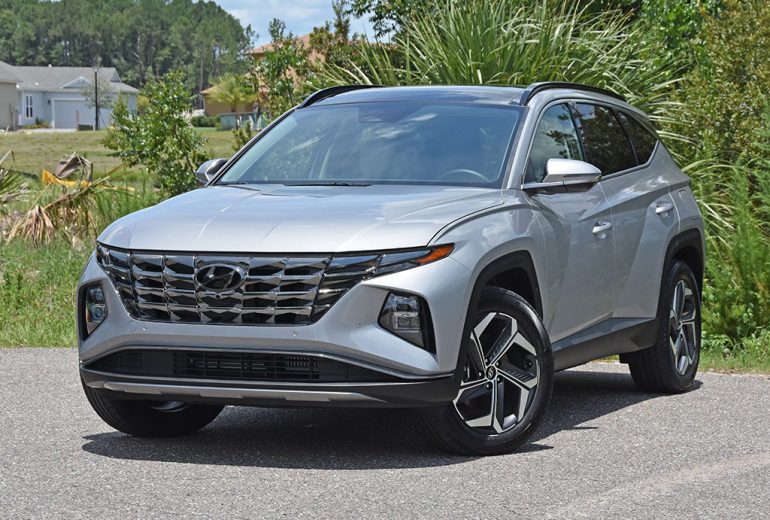 Hyundai has done well to offer the masses several variations of crossover utility vehicles and within some of those segments offer up different powertrain options, including a plug-in-hybrid electric vehicle (PHEV) for its compact Tucson. In getting a chance to check out the new Tucson PHEV there’s a lot to be excited about as manufacturers move towards an electric vehicle (EV) future.

The new 2022 Hyundai Tucson is already a decent compact crossover offering near midsize accommodations and a few powertrain options, including my Tucson PHEV test vehicle. The plugin-hybrid Tucson takes on the same approach as its other powertrain siblings offering a vast array of features and surprisingly comfortable and spacious seating areas. Powering the new Tucson PHEV is a combination of the brand’s 1.6-liter turbocharged 4-cylinder engine paired with a 66.9-kW motor sandwiched with a 6-speed automatic transmission. 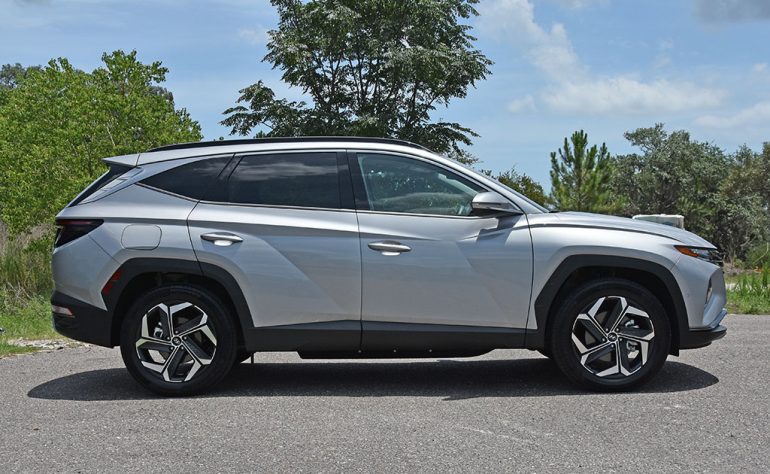 The motor alone has enough power to propel the vehicle with decent acceleration to avoid upsetting vehicles behind you. Though, the electric power alone while in the default electric mode when the battery is charged won’t necessarily win any races as it is limited to a 90-horsepower motor that cleverly uses the 6-speed automatic transmission’s gearing. When using electric power, the gas engine only kicks over when you demand extra power for passing situations or accelerate rather hard. Otherwise, the electric mode remains but there isn’t a reference point on the power meter in the digital gauge cluster to show the limits for the electric motor’s acceleration before the gas motor is demanded. The same rings true for using the hybrid drive setting, which will essentially retain any battery charge that you have garnered from either plugging the vehicle into a 110-volt household outlet or a Level 2-equivalent charger. Using the household 110-volt takes just over 10 hours for a full charge from full depletion while a 220-volt takes just over 3 hours. 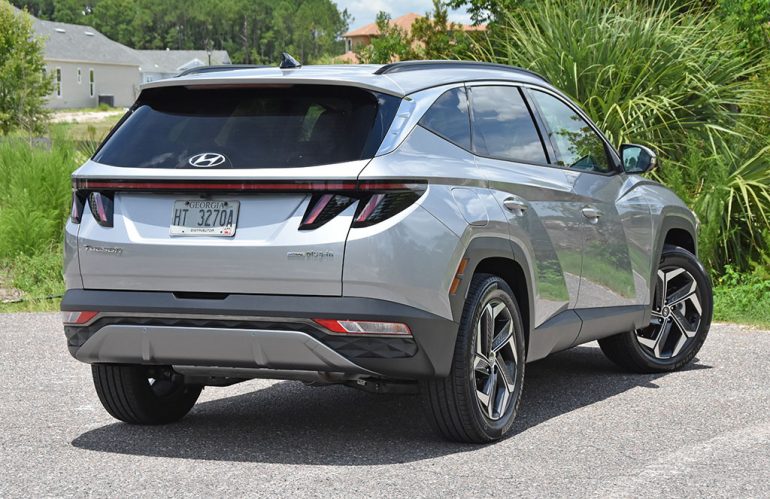 With a full charge of the smallish PHEV 13.8-kWh battery pack, you can get about 33 miles of all-electric range out of the Tucson PHEV. That range is dependent on many power consumption factors, such as the wise use of the dual-zone automatic climate control system that has a clever driver-only setting that is to be used when you have no additional passengers to conserve power.

The driving dynamic of the Tucson PHEV doesn’t feel much different from the normal Tucson but feels a bit heavier but has the extra power to overcome the extra heft from the battery pack. Having all-wheel-drive in the Tucson PHEV, the only way it comes, is a good benefit as well to prevent front wheel spin that is normally checked by the traction and stability control system. The handling of the Tucson PHEV is also surprising as feels confident and inspiring out on the road and has a nearly seamless transition from the electric motor to the gas engine when power is demanded, in addition to the transition of the regenerative braking to the friction brakes. Overall, Hyundai did well with the control units of the Tucson PHEV giving you a little extra for “performance” in the plugin-hybrid over the non-plugin hybrid.

The fuel consumption I thought could have been a little better in use of the hybrid drive setting when the PHEV battery id depleted. Here, I saw just shy of the EPA estimates of 35 mpg for the combined city/highway gasoline number. When you have a fully charged battery pack you’ll get the best bang out of the Tucson PHEV and yield upwards of 80 mpg with the 33-mile EV range and use of a full 11.1-gallon tank of regular unleaded. 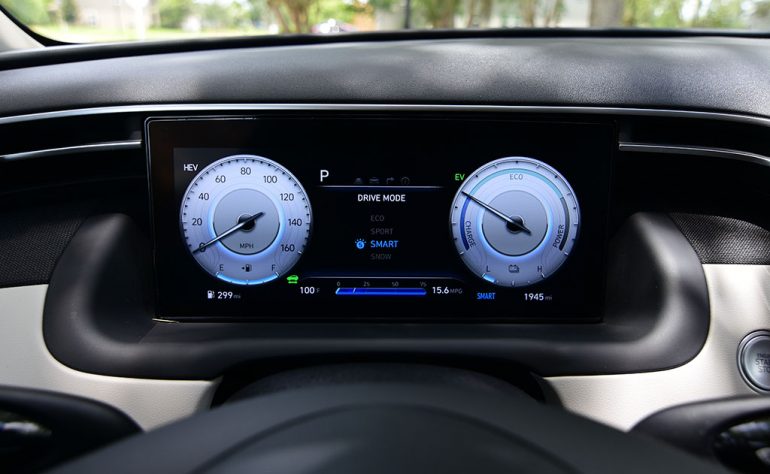 Just like my previous reviews of the new Hyundai Tucson, the interior has excellent accommodations and tends to hit a level above its compact classification. The dashboard is simplistic with all touch-capacitive buttons below the large 10.25-inch infotainment touchscreen. The system, as explained in all my previous Tucson reviews, is easy to use with a very short learning curve. Though, the main issue I have with the interface on the dashboard is having nothing but touch-capacitive buttons that tend to demand a little extra attention to press the correct spot, which may divert some of your attention off the road at times. 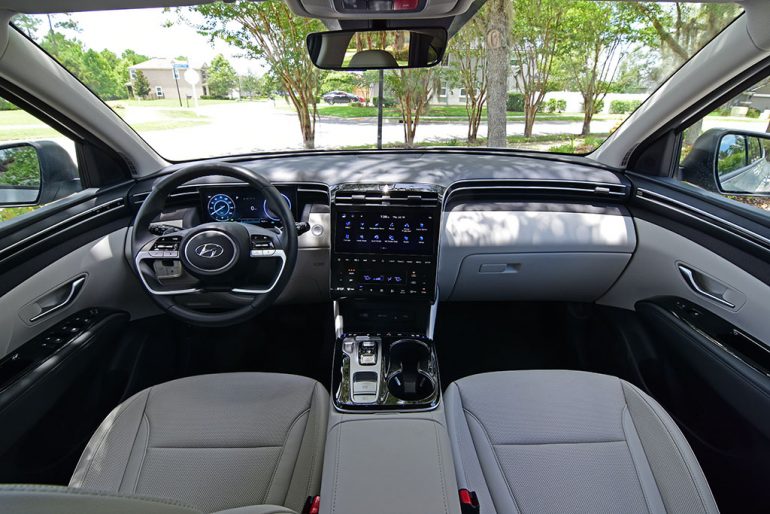 The power front seats have heating and ventilation and feel worthy of being comfy on long trips. The rear seating is also spacious and has heating on the outboard seats in my top-level Limited trim PHEV test vehicle. 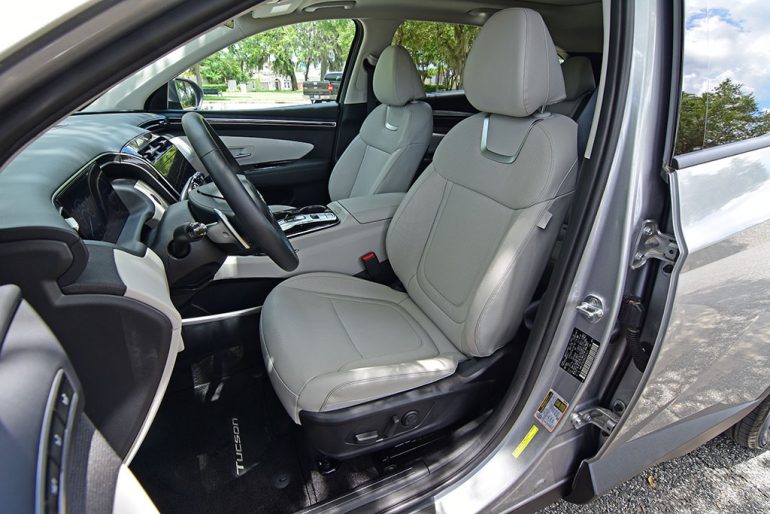 There’s the expected integration of Apple CarPlay and Android Auto along with having a 10.25-inch digital gauge cluster that offers a few unique displays dependent on your drive mode. The only thing I wish Hyundai would add for the information readouts is more clarification on the PHEV drive setting for “holding” your battery charge and a reference for how much acceleration power can be used before the gas engine starts up. Doing so would enable a drive to be more energy conscious and potentially yield an even longer EV range. 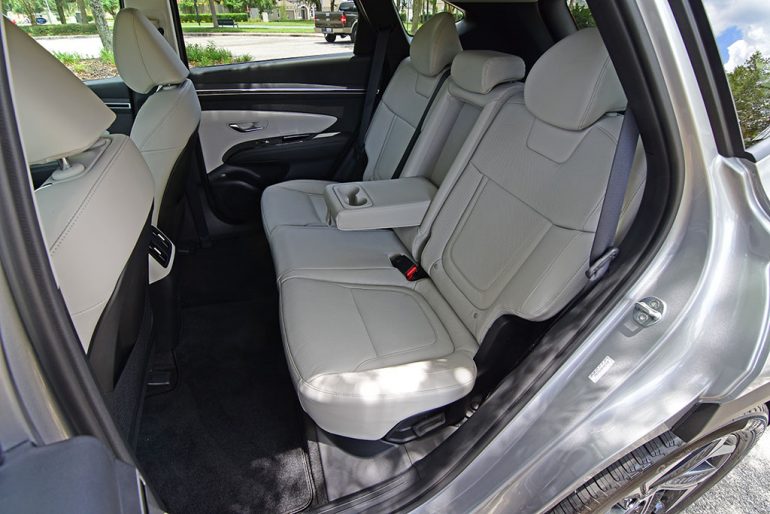 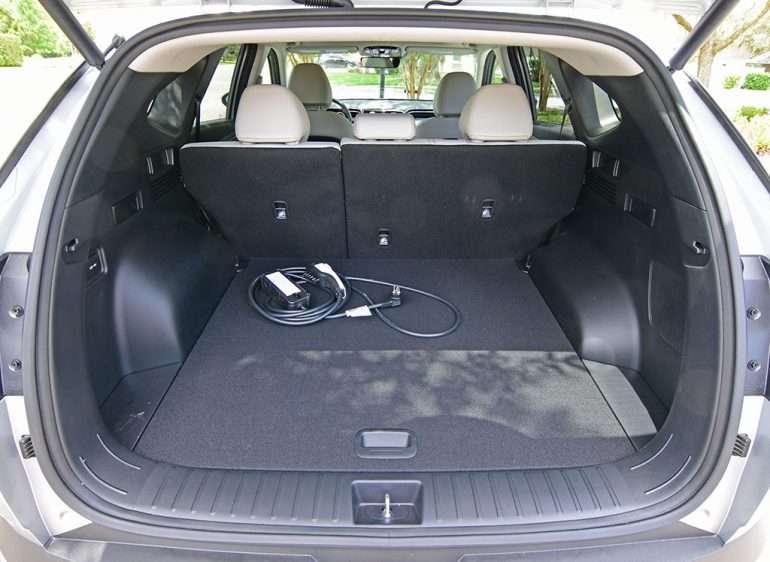 The Hyundai Tucson PHEV comes in two trim levels with the base SEL trim starting at $35,400 while my Limited trim test vehicle comes to $43,200 plus an inland and freight charge of $1,245. For either trim, there’s a set number of features included with very minimal options available (such as floor mats).