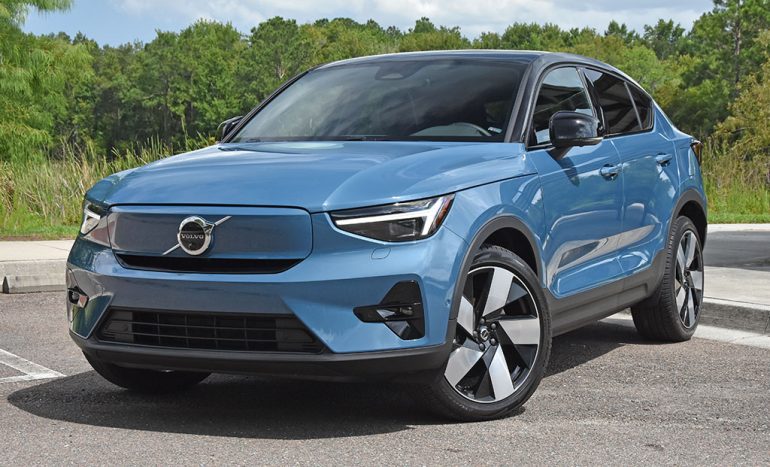 The Electric Vehicle (EV) evolution is heating up as major automakers introduce new iterations of EVs that garner the proper attention but not in a way to turn off potential buyers. Volvo has entered the EV fray and their latest XC40 Recharge and C40 Recharge crossovers are making waves with their surprising performance and good looks.

This week, I had the chance to embark on an experience with the new 2022 Volvo C40 Recharge Ultimate, which is more of a coupe-like-styled take on the XC40 but with a sloping rear. The C40 Recharge has the same EV bits under its rather attractive Swedish sheet metal as the XC40 but with a slightly higher price. Otherwise, the C40 is a coupe-liked-styled compact crossover that comes exclusively in EV form despite the XC40 having a gas-powered counterpart to its Recharge full EV setup shared with the C40. 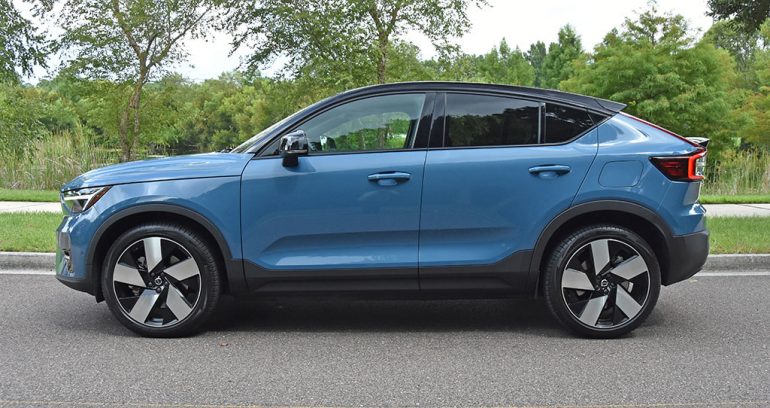 Where the new Volvo C40 EV shines brightly, which I think could be its only advantage over the direct competition is in its driving character and acceleration, which almost matches that of the Tesla Model Y but slightly edges out others. Here, the C40 EV beats its manufacturer estimate of a 0-60 mph time of 4.5 seconds and actually scores 4.3 or even 4.2 seconds in tests conducted by different automotive publications. After driving the C40 Recharge myself and consistently getting about 4.4 seconds to 60 mph, I’m safe to say that this Volvo EV is quite fast and has a substantial grunt from its two motors, one at each axle, working to produce a total of 402 horsepower and 486 lb-ft of torque. 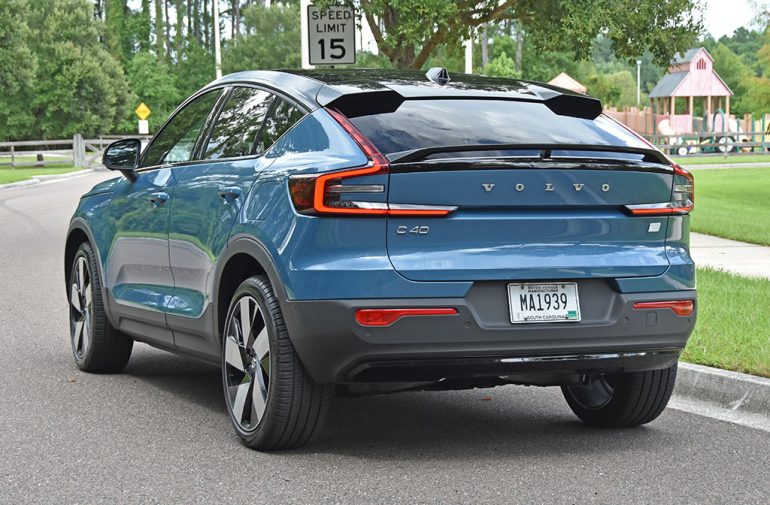 The Volvo C40 comes with one powertrain powering all four wheels no matter which trim you get (Core, Plus, or Ultimate) from two electric motors. Moreover, the C40 Recharge doesn’t have any drive modes, only the option to select one-pedal driving or not. When one-pedal driving is off there isn’t any noticeable declaration from the motors allowing the vehicle to glide only slowing from the rolling resistance of the 20-inch wheels and wind drag. Such a choice may not make sense to some as there is no regenerative braking to feed power back to the battery. However, using the one-pedal feature does add regen braking to feed quite a bit of power back to the battery as the one-pedal drive is rather aggressive but you quickly learn how to modulate the accelerator and come to a complete stop without ever hitting the brakes at times. 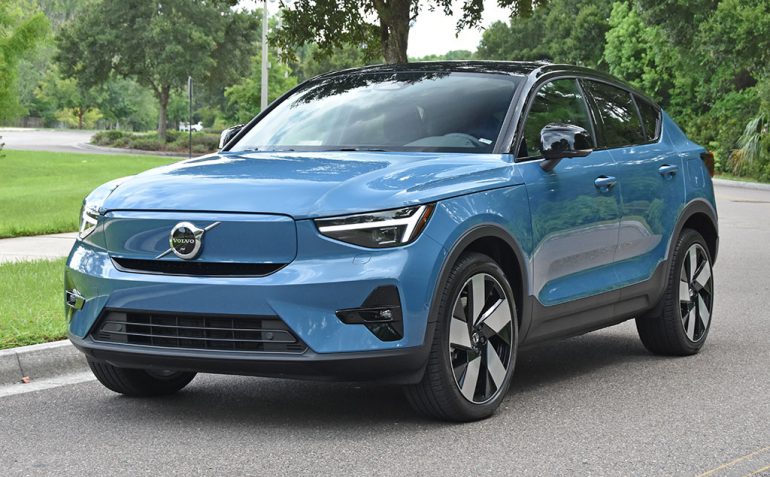 The ride quality is on the firm side and some of the curb weight of the C40, around 4,800 pounds, can be felt at times when you’re not laying into the accelerator pedal. The C40 feels securely planted to the road without any drama when pushing it a little hard through turns thanks to the low center of gravity with the battery back being under a floor that’s surprisingly not flat inside. There’s a nice solid feel to the C40 Recharge out on the road that inspires driver confidence and the instant 486 lb-ft of instant torque feels like you can overtake almost anything and all you hear on the highway is a slight roar from the large 20-inch Pirelli Scorpion All-Season tires. 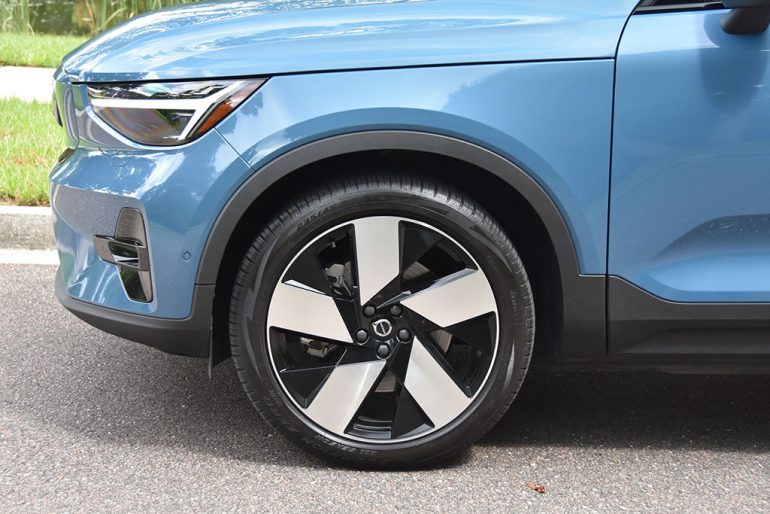 The new Volvo C40 Recharge, just like its XC40 Recharge sibling, gets a battery pack with 75 kWh of usable capacity (78 kWh pack) that gives the EV an EPA range of 226 miles. The charging rate is capped at 150 kW but during my tests, on a steaming hot 97-degree summer day at an Electrify America DC fast 150 kW charging station the charging rate maxed out at 38 kW. What I chalk up as an anomaly, left me somewhat disappointed but I knew my C40 test vehicle required a software update that could have affected such, in addition to my range being slightly lower than the estimated 226 miles with a full charge. The hot temps outside and 3 other vehicles charging at my 4-stall station may have had something to do with the slower charge speeds as well. 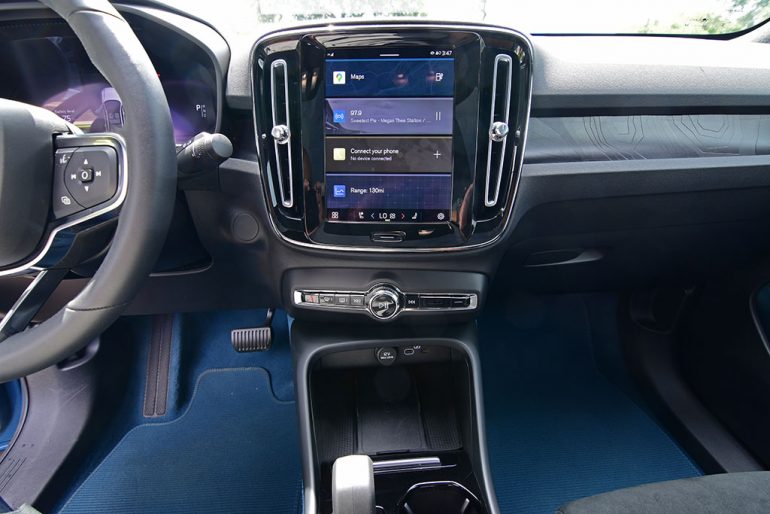 The C40 Recharge comes with a home charging capable for your standard 110v (or 120v) home outlet and an adaptor for the unit to connect to your standard 240v (or 220v) dryer outlet for Level 2 charging, which takes about 8 to 10 hours depending on amperage. At a DC fast charger utilizing the full 150 kW ability of the C40 you can perform a 10% charge state up to 80% in about 30 minutes.

Volvo has also gone the way of Tesla when it comes to some of its minimalistic thinking. As such, the new C40 Recharge doesn’t have a physical start/stop ignition button or switch. Instead, the vehicle recognizes the presence of the key and the driver and decides to turn the vehicle on or off through its new Convenient Entry and Start system. The downfall I found is that after the driver’s seat senses that you have left the vehicle it starts to shut down even if there is a passenger still seated in the vehicle. I’m not sure if that’s an oversight or something that can be defeated – but in nearly 100-degree weather you don’t want your vehicle shutting off with a passenger still seated – unless they manually turn the climate control system on using the touchscreen. Also, in a Tesla way, I’m not too crazy about the glass roof that doesn’t have a sunshade even though it’s properly tinted and properly blocks UV rays. 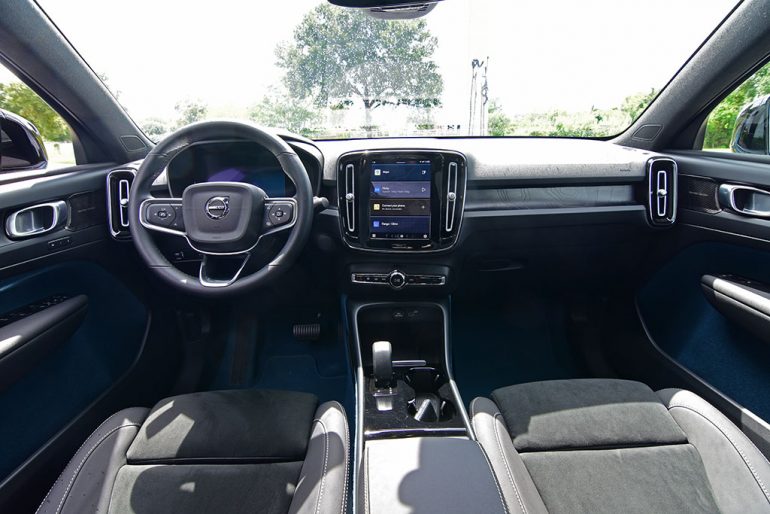 Other minimalistic approaches include the traditional infotainment unit that Volvo’s been using for the past several years with a 9-inch tablet-style touchscreen and only a few physical buttons including a large easy-to-reach volume knob. The infotainment unit has an interesting learning curve that usually requires sitting in a parking lot (or driveway) with the C40 to learn how to access the core menus and functions. Most of the vehicle controls and primary functions of the climate control are accessed by the touchscreen. Once you go through it a couple of times the system is somewhat easy to navigate as you’ll learn how Volvo just does things differently from everyone else.

There’s Apple CarPlay integration and Android fans will be happy to see the Android OS running the infotainment system with many Google apps embedded for Maps, Play Store, and Google Assistant. There’s a limited amount of EV charging and range information, which is somewhat of a disappointment. Even worse, is a welcoming 12.3-inch digital driver’s gauge cluster never shows you the vehicle’s range. You must get your estimated range from the center infotainment touchscreen, which you’ll have to enter the home screen or the charging menu to display it. You can only view your battery percentage state in the driver’s digital gauge cluster. Again, Volvo just does things different. 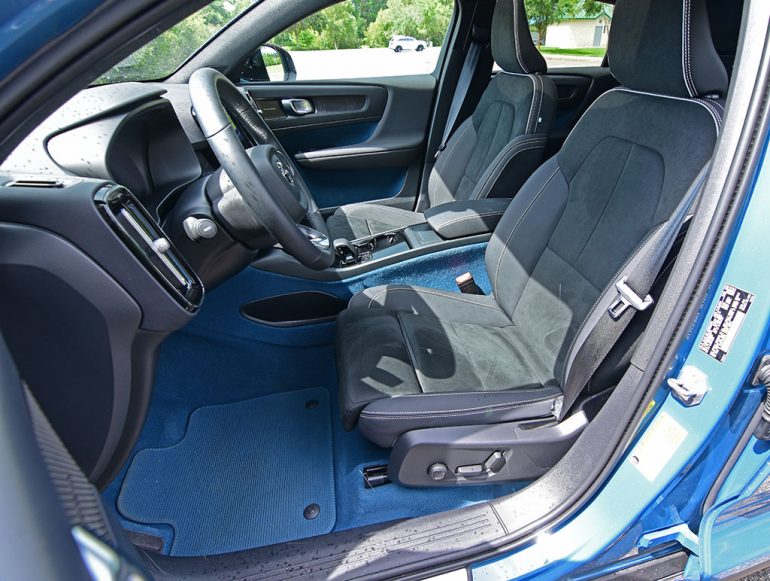 The seating is comfy for the compact size of the C40 Recharge. However, it would be nice for Volvo to offer front seat ventilation as you’re only left with heated front seats along with a heated steering wheel. There’s a clever use of space up front and the rear seating area still has just enough headroom even with its sloping roof line. Where the roof line starts to really cut down on space is in the cargo area and the rear window, which only leaves you with a sliver of rearward visibility like that of many low-slung supercars. The fit and finish is excellent with several soft-touch surfaces and neat ambient LED lighting elements through artsy translucent trim surfaces on the door and dashboard. 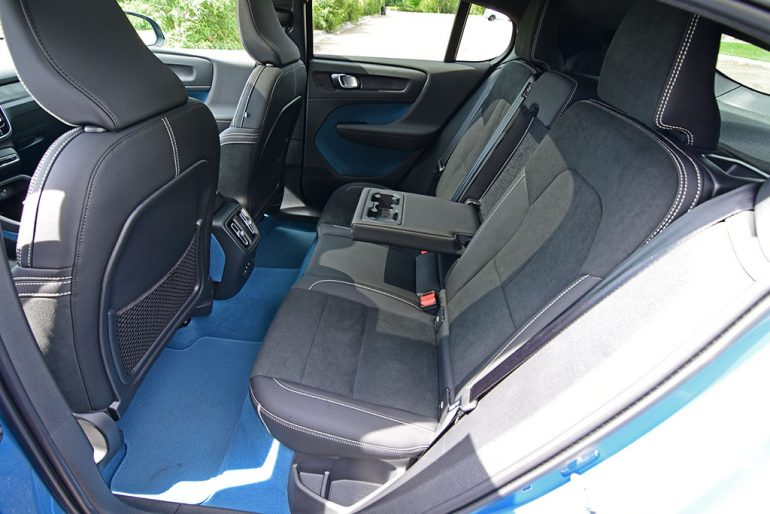 Volvo remains at the forefront of vehicle safety, and they’ve includes the full array of expected active safety features. The suite of features includes the smart and quick-reacting Pilot Assist adaptive cruise control system that does a good job for a soft level of driving autonomy that requires you to keep your hands on the steering wheel. The 360-degree camera system is also a welcomed feature, but it can be a bit cumbersome because you can only display a top-down 360 view or a single camera angle (ie: rear camera) one at a time, unlike other manufacturers that give you both a rearward view and top-down 360-degree view at the same time for quick glancing convenience. 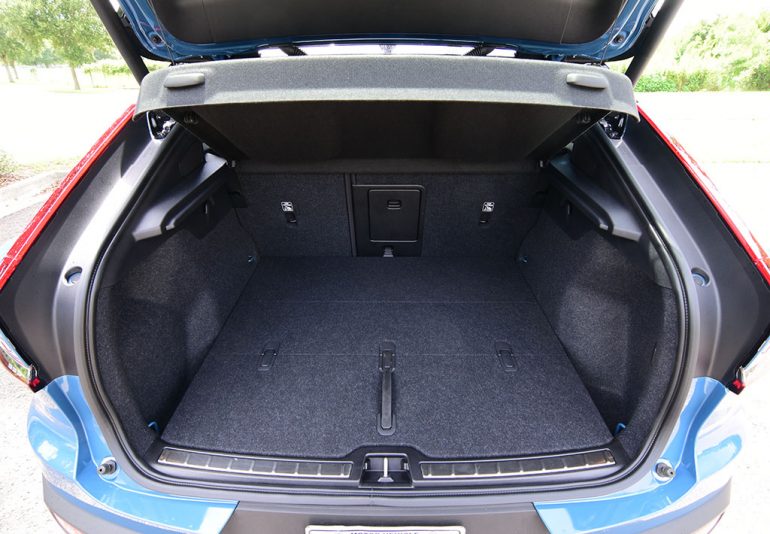 At the end of the day, Volvo has covered the performance, looks (especially in this test vehicle’s Fjord Blue metallic paint color), and luxury comfort areas of their second full EV in the new C40. I can only see things getting better from here to better compete with others and justify the starting price of $59,365 for the base Core model, or the price of my top trimmed C40 Recharge Ultimate Twin test vehicle at $60,540 including a destination charge of $1,095.