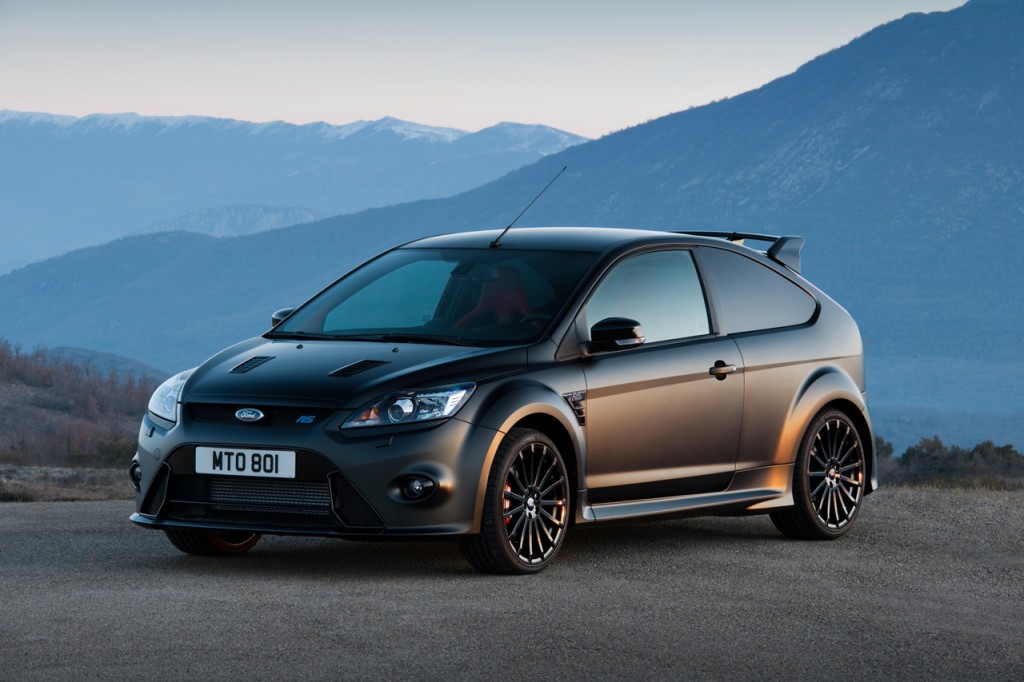 Lucky us, we get to legally share (European) images of the upcoming pocket rocket from Ford, the Focus RS500.

A new and powerful limited edition Focus RS model, called the RS500, is being launched as the ultimate performance Ford and will provide the definitive driving experience for serious performance car enthusiasts.

Making its global debut at the 2010 Leipzig Motor Show in Germany on April 9, the new model has been given the RS500 designation to highlight its strictly-limited production run of 500 individually-numbered vehicles, all of which will be offered for customers to purchase.

The RS500’s breathtaking power is matched by an equally dramatic appearance.  The limited edition model sports a unique matt black ‘foil’ paint finish with matching alloy wheels to deliver a powerful visual impact which is unlike any other production Ford.

“We were determined to mark the end of production for the current and acclaimed Focus RS with something even more special,” said Joe Bakaj, Ford of Europe’s vice president for Product Development. “From its stunning looks to its intoxicating performance, we have no doubt that the RS500 will be appreciated and quickly snapped up by performance car enthusiasts.

“This vehicle joins a long line of iconic RS Fords and is a worthy recipient of the RS500 name, which became synonymous with success on the road and track with the legendary Sierra RS500 Cosworth that dominated saloon car racing during the late 1980s,” Bakaj added.

The RS500 marks the end of production for the current generation Focus RS, with the last vehicles scheduled to leave Ford’s Saarlouis Assembly Plant in Germany during September 2010.

While overwhelming customer demand has ensured that total Focus RS output is expected to exceed 11,000 units (significantly more than the 7,000 to 8,000 originally forecast), production of the RS500 will start at Ford’s Saarlouis plant in Germany during May and will be strictly limited to 500 customer vehicles for twenty European markets.

Each RS500 will carry a metal plaque on the centre console, hand-engraved with a unique identification number from 001 to 500.

A small number of pre-production vehicles produced for internal Ford use – such as product development or press demonstrators – will have their own unique numbering scheme, to ensure the exclusivity of the 500 customer cars.

Demand for the RS500 is expected to exceed supply by a considerable margin, and the full production run of just 500 vehicles is being allocated across 20 European markets in line with the anticipated level of interest. For some countries, the very small number of vehicles allocated means the RS500 will, indeed, be a very exclusive purchase for its customers.

A dedicated website – www.focusrs500.com – will allow customers and enthusiasts to gain further information, including projected quantities of available vehicles by market, plus access to download photography and video clips. The site will also provide links to national Ford websites so customers can identify dealers and prices.

Focus RS also has its own Facebook page – www.facebook.com/fordfocusrs – with more than 13,500 fans from across the world, and RS500 launch activities will be shared on this site.

“The more urgent engine sound and sheer thrust of the mid-range performance tell the driver immediately that this is not a standard Focus RS,” said Gunnar Herrmann, Ford’s Global C-Car Vehicle Line Director. “With 15 per cent more power and the same gutsy, sporting character, our new powertrain gives the RS500 the special engine it deserves.”

To provide the RS500 with a fitting power unit, the 305 PS turbocharged Duratec RS
2.5-litre engine from the standard Focus RS has been upgraded to deliver significantly more top-end and mid-range power, but without compromising the base engine’s strength and responsiveness at lower revs.

To achieve the required balance of muscular mid-range and top-end performance, the engine has benefitted from a comprehensive package of enhancements aimed at improving the engine’s breathing and combustion.

The changes include a significantly larger air-to-air intercooler to deliver a cooler, denser charge; a larger air filter box for increased airflow; larger diameter exhaust downpipe; and an uprated fuel pump, along with an updated software calibration to optimise the performance of the revised engine.

“The engine’s improved breathing has allowed us to increase power without having to raise turbo boost pressure significantly,” explained Herrmann.  “This has made it possible to enhance peak performance while maintaining the excellent driveability, fuel consumption and emissions of the standard Focus RS.”

Preliminary performance figures for the Focus RS500 indicate that it achieves 0-100km/h in 5.6 seconds, with a top speed similar to the 263 km/h in the standard RS.

The Focus RS500 engine has been modified by a team enthusiast engineers from Ford TeamRS in partnership with Revolve Technologies, the automotive engineering firm which develops Ford approved performance upgrades through its Mountune brand.

The shared development and testing programme ensured that the 350 PS Duratec RS engine achieved the specified performance targets while also delivering the standards of durability and serviceability expected by Ford RS customers.

The comprehensive engineering details already developed for the 305 PS Focus RS engine – including a revised cylinder head gasket, ultra-durable metal sprayed cylinder bores, revised pistons and new connecting rods – have ensured that no further mechanical changes were required to cope with the increased performance of the 350 PS RS500 unit.

A key factor in the success of the latest generation Focus RS has been its advanced front wheel drive chassis, which combines a wider track, the unique ‘RevoKnuckle’ front suspension design and a Quaife helical limited slip differential to deliver responsive steering, outstanding traction and a minimum of unwanted torque steer.

The same chassis design has proved equally effective in handling the increased torque levels of the Focus RS500, and the specification is unchanged for this application, helping to retain the same sporting and responsive dynamic character which is central to the appeal of the acclaimed standard Focus RS.

The high-performance braking system, and the 19-inch wheels and 235/35/R19 tyres, are also carried over unchanged from the standard vehicle, although red brake calipers and a dramatic black finish for the alloy wheels are unique to the RS500.

Performance Tested to the Limit

In recognition of the extreme performance potential of the Focus RS500, the limited edition model has been subjected to a series of concentrated durability tests which have focused on the car’s track capabilities.

The development programme included a dedicated endurance test at the infamous Nürburgring Nordschleife in Germany, where Ford TeamRS engineers were joined by three Ford-employed racing drivers working in shifts to complete 10,000km of non-stop driving, equivalent to competing in ten consecutive Nürburgring 24-hour races without a break.

“We wanted to be sure that serious enthusiasts could drive the Focus RS500 to the limit on track, without any concerns about the car’s stamina,” said Matthias Tonn, Focus RS500 Chief Programme Engineer.  “This meant going beyond our standard test routines, and pushing the car to the edge of its performance envelope.  After 500 non-stop laps of the Nürburgring, we are very confident of its durability and delighted at the way it performed, with an 8-minute lap time within reach”.

The standard Focus RS already creates a lasting impression with its functional yet striking design, but the unique matt black ‘foil’ paint finish of the Focus RS500 makes this limited edition car even more special.

Stunning matt black bodywork is combined with matching metallic black alloy wheels, and the gloss black finish of the trapezoidal lower front grille and splitter, twin-blade rear spoiler and the rear venturi, which manages airflow beneath the rear of the car.

Small flashes of colour around the vehicle – including the red brake calipers, blue RS badges, and the special blue and red RS500 badge on the tailgate – only serve to emphasise the car’s unique appearance.

“We deliberately set out to ensure that the Focus RS500 looks like no other production vehicle,” added Tonn.  “With its dramatic black finish and imposing stance, this car really is mean, moody and magnificent!”

The matt black foil finish for the RS500 was developed in partnership with the technology company 3M, which specialises in advanced film products for the automotive industry.

All Focus RS500 vehicles will be painted in a standard Panther Black metallic colour, before being shipped to a dedicated 3M facility near Frankfurt, Germany, where a special foil film will be applied to the bodywork to create the matt black effect.

The film is extremely durable, and is specifically designed to resist superficial marks and scratches in automotive applications.  In the event of damage to the bodywork, Ford dealers will be fully supported by a Europe-wide network of 3M agents who can replace the film on the affected panels.

Attention to detail on the RS500 exterior is also reflected inside the car, with a series of special features which are unique to this limited edition model.

The centre console is distinguished by the car’s individually-numbered metal plaque, and by a unique carbon-effect finish to the bezel which carries a distinctive RS pattern.

In contrast to the blue detailing on the standard Focus RS, the RS500 features a special red colour scheme, notably on the stitching of the leather trim on the steering wheel, door trim and gear lever gaiter, and on the floor mats.

Customers also have the option of specifying the bespoke Recaro front sports seats in full red leather, to further enhance the visual impact.

Premium Specification for All Vehicles

All Focus RS500 vehicles will be equipped to a very high specification as standard, with only two features available as optional items. In addition to the comprehensive equipment levels on the standard Focus RS, the RS500 includes the following features as standard:

The two optional features are touchscreen DVD navigation and audio system, and the full leather Recaro front seats in red.

“We believe that customers lucky enough to secure one of the limited edition Focus RS500 models will be getting a real collectors item,” said Joe Bakaj. “From its stunning looks, to its immense driver appeal and its complete specification, the Focus RS500 provides enthusiasts with the ultimate performance Ford for the road.”