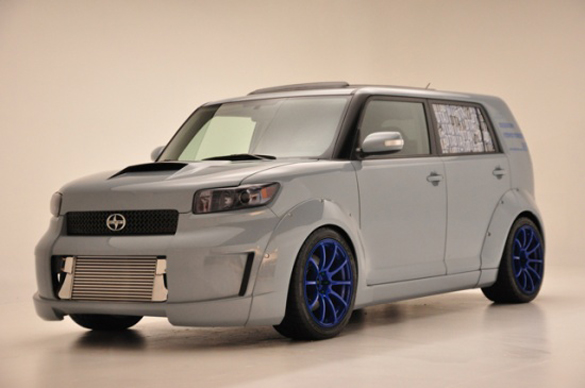 The epitome of Japanese sports cars still lies with the infamous Toyota Supra and its 2JZ inline-6cyl engine. The tuner company Rogue Status knows this all too well, so well, that they used the 2JZ Toyota Supra engine for a drift Scion xB. Of course the xB is not your 1st choice, or for that matter any choice, for a Toyota Supra motor. 2JZs belongs in a rear-wheel-drive Lexus or any other semi-sporty Toyota but not the boxy Scion xB right? Rogue Status went all out enlisting the help of Stephan Papadakis who is a well-known figure in the automotive tuning world for modifying and turning one-of-a-kind vehicles.

Rogue Status are big fans of Tanner Foust and Ken Gushi who both drive the RWD versions of Scion tC’s in the Formula Drift Series. They would know better than most what needs to be done to build such a creative mixture not to mention making the decision to use the 2JZ which is one of the best foundations to work off of in terms of tuning and performance from an engine.