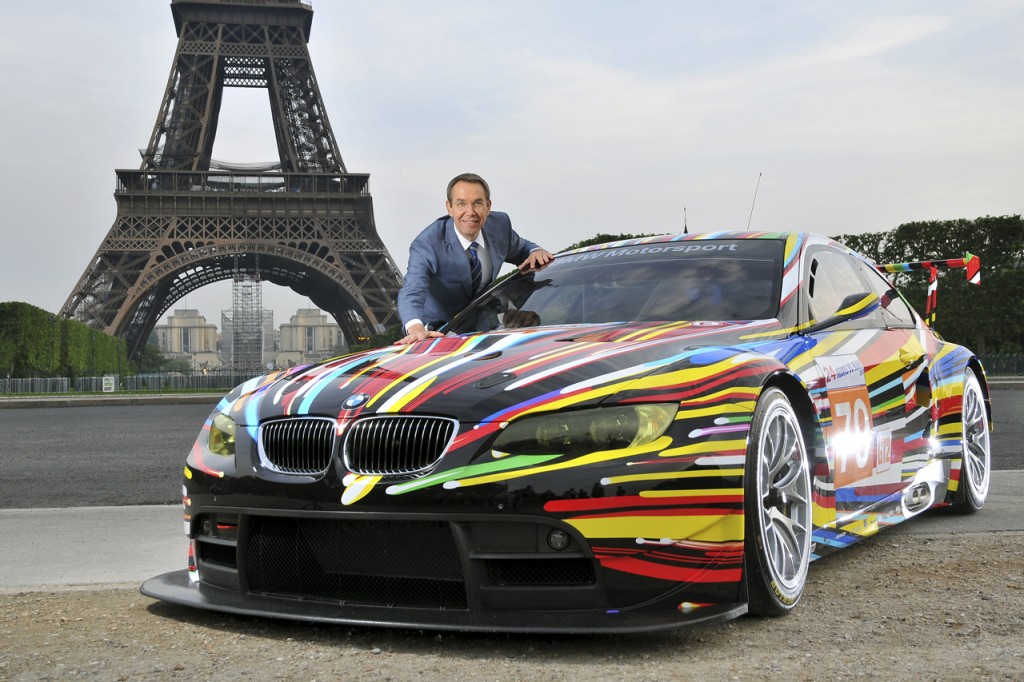 BMW art cars has a 35-year history and is capped off by the introduction of Jeff Koons’ BMW art car revleaed in Paris today. The M3 GT2 was painted by Jeff Koons, an American artist, with an edgy multicolored theme that looks quite interesting when photographed from certain angles.

You can watch video unveiling of the car below. Look for this car to run in the upcoming 24 Hours of Le Mans.

World Premiere of Jeff Koons’ BMW Art Car at the Centre Pompidou in Paris. Car will race at 24 hours of Le Mans.

Note: This press release is a 1:1 copy of the original issued by BMW headquarters in Germany. No adaptations have been made to cater for the UK market.

At the premiere of the 17th BMW Art Car Jeff Koons unveiled and signed his car in front of 300 international VIP guests on June 1 in the Centre Pompidou, one of the world’s most prestigious cultural institutions for modern and contemporary art. It is the same place where Roy Lichtenstein back in 1977 first presented and signed his Art Car.

In the spirit of Calder, Stella, Lichtenstein, Warhol, BMW announced this year that the 17th Art Car created by Jeff Koons will race where the first rolling pieces of art by legendary artists raced – at the 24 Hours of Le Mans in France on June 12-13, 2010. Koons’ canvas is a BMW M3 GT2, which was homologated to compete at this year’s running of the world’s most famous endurance race.

On June 2, between 11 am to 9 pm, the public will have the chance to see the Art Car free of charge in the Forum of the Centre Pompidou. At 5.30 pm Jeff Koons will participate in a book signing at the official book store of the museum before he will talk about his work in conversation with Alain Seban, President of the Centre Pompidou, at 6 pm at the Forum of the museum.

As part of his creative process, the artist collected images of race cars, related graphics, vibrant colors, speed and explosions. The resulting artwork of bright colors conceived by Koons is evocative of power, motion and bursting energy. Its silver interior along with the powerful exterior design, the Art Car will impart a dynamic appearance even when it’s standing still.

“These race cars are like life, they are powerful and there is a lot of energy,” said Koons. “You can participate with it, add to it and let yourself transcend with its energy. There is a lot of power under that hood and I want to let my ideas transcend with the car – it’s really to connect with that power”.

Koons has been in an intense collaboration with BMW’s team in Munich for months – melding his skill with sophisticated BMW engineering – to ensure that the 17th BMW Art Car will be race-ready for the 24 Hours of Le Mans.

Traveling back and forth to Germany many times since the February 2 announcement that Koons would create the 17th BMW Art Car, the artist has worked with the BMW engineering and design teams to conduct in-depth explorations of materials and application options that will prove crucial to optimizing both the aesthetic and aerodynamic attributes of the race car. Working with actual 3-D computer-aided design (CAD) models of the BMW M3 GT2, Koons could simulate the application of the graphic to the car’s surfaces and evaluate it from all angles.

Koons even donned a helmet and joined BMW’s Rahal Letterman Racing Team for testing in Sebring, Florida, on February 23. Koons was able to experience the M3 GT2 at race speed to further inspire his design. As Koons describes it, he witnessed “the raw unfiltered performance” of the M3 GT2 from the seat of a historic BMW M1 race car. Koons also drove a BMW M3 Coupe on the circuit to further the dynamic exercis

Under Koons’ direct guidance and supervision, his BMW Art Car was produced in assistance with a team of BMW engineers and designers at Schmid Design, (ORT), Bavaria. The challenge to create the BMW Art Car had to do with using a light material and a design that would not interfere with the racecar’s aerodynamics and weight. Timing was also an issue, as there was only a two month window between the first design sketches and the Paris world premiere. This is why digital print on car wrapping vinyl was used covered by a double clear-coating to bring out the color. To apply hundreds of dynamic lines of Koons’ design onto the car, CAD designs were translated from 3D into 2D for the printing process and then painstakingly applied to the entire car as well as onto individual spare parts. Koons design incorporates many bright contrasting colors to communicate the aesthetics of power. The concept design was transformed into hard eged lines of color. Graphics of debris were added to the rear sides and back of the car to similute the power of the car. Furthermore, two graphic rings on the rear of the car represent supersonic acceleration.

The germination of Koons’ collaboration with BMW began in 2003, when he expressed his desire to create a BMW Art Car. His relationship with BMW started more than two decades ago when he drove a BMW while residing in Munich, home to the BMW Group headquarters. Koons is known for his heartfelt appreciation of cars. Earlier this year he was even recognized by music icon Bono of U2 as one of the ideal artists to design a car that would make the world fall in love with automobiles again.

Koons’ creative process for the BMW Art Car mirrors techniques, some borrowed from transportation design and development, which he regularly employs for his artistic production. For example, in the creation of Koons’ monumental sculptures, his studio uses 3-D CAD models to evaluate the surfaces, assembles them via methods found in bike chop shops, and paints them in a manner based on sophisticated automotive painting techniques.

The 24 Hours of Le Mans race

The 24 Hours of Le Mans is the world’s oldest endurance race in all of sports car racing, held annually since 1923 near the town of Le Mans, Sarthe, France. Commonly known as the Grand Prix of Endurance, it is organized by the Automobile Club de l’Ouest (ACO) and runs on a circuit containing closed public roads. The race is designed not only to test a car and driver’s ability to be quick, but also to last over a 24-hour period.

French auctioneer and racing driver Hervé Poulain first had the idea of asking an artist to paint the car he himself would compete with. Taking up this initiative in 1975, American artist Alexander Calder painted a BMW racing car, thus laying the foundation. The Art Car experiment was soon continued: a year later, Calder Art Car co-driver Sam Posey introduced Frank Stella to the idea of BMW Art Cars when the New York-based artist covered a BMW with his typical grid-like pattern. Stella’s work was followed by a series of celebrated pop artists: Roy Lichtenstein, Andy Warhol and Robert Rauschenberg. Apart from Rauschenberg’s Art Car, all these took part in the Le Mans 24-hour race, some of them enjoying remarkable success.

Derived from the BMW M3 high-performance sports car, the BMW M3 GT2 boasts a 4.0-liter V8 engine with a maximum output of 500 bhp, an upgraded chassis, racing-caliber brakes, and extensive use of lightweight materials.  Able to reach 100 mph in 3.4 seconds, the BMW M3 GT2 is rapidly emerging as a real first year contender at this year’s event.

For the Comeback at 24 Le Mans BMW Motorsport is supported by numerous successful partners. This is why the BMW M3 GT2 will be labeled with the logos of Castrol, Crowne Plaza, Dunlop, Randstad, Sympatex, LuK, H&R, BBS and NGK for the race on the “Circuit de la Sarthe”.

Since 1975, artists from throughout the world have turned BMW automobiles into art signifying a particular period through the Art Car program. In 2007, the latest installment was revealed with Olafur Eliasson’s “Your mobile expectations: BMW H2R project.” Many of the cars by the likes of Warhol, Lichtenstein, Stella, Rauschenberg, Hockney and Holzer have been exhibited in renowned museums throughout the world including the Louvre, the Guggenheim Museums, and the Shanghai Art Museum. They have been displayed at the BMW Museum in Munich, between 2006 and 2010 and many went on a world tour throughout Asia, Russia, Africa, India, the United States and Mexico. The Koons car number, “79,” pays tribute to the 1979 Andy Warhol car. The Warhol car was assigned the number “76,” an homage to the 1976 Frank Stella car, both of which raced at Le Mans.

The home of all BMW Art Cars is the BMW Museum in Munich. Starting in September, Koons’ 17th BMW Art Car will be presented there together with some of its predecessors.

With over 100 major projects worldwide, BMW Group cultural programs have been an integral part of the company’s contributions to society for almost 40 years.  Besides contemporary art, architecture and design, classical music and jazz are key components of this engagement.

The BMW Group is one of the most successful manufacturers of automobiles and motorcycles in the world with its BMW, MINI and Rolls-Royce brands. As a global company, the BMW Group operates 24 production facilities in 13 countries and has a global sales network in more than 140 countries.

The BMW Group achieved a global sales volume of approximately 1.29 million automobiles and over 87,000 motorcycles for the 2009 financial year. The pre-tax profit for 2009 was euro 413 million, revenues totalled euro 50.68 billion. At 31 December 2009, the company employed a global workforce of approximately 96,000 associates. The success of the BMW Group has always been built on long-term thinking and responsible action. The company has therefore established ecological and social sustainability throughout the value chain, comprehensive product responsibility and a clear commitment to conserving resources as an integral part of its strategy. As a result of its efforts, the BMW Group has been ranked industry leader in the Dow Jones Sustainability Indexes for the last five years.