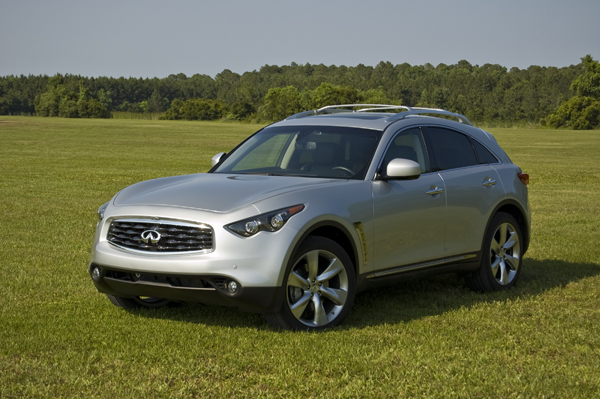 When you think of a crossover vehicle you usually do not think of monstrous proportions of power and performance, but when it comes to Infiniti’s FX lineup of vehicles, that’s just what you get and in rather large dosages especially in the 2010 FX50S.

The new 2010 Infiniti FX50S looks mean and has the performance numbers to back it up. Outside of the Infiniti FX you will find a new look from the redesign in 2009, which makes a bolder statement than the outgoing 2008 model.  Although the looks of the new FX may not sit well with everyone, it is a crowd pleaser when you find out what this vehicle it is capable of doing.  The FX50S is packed full of electronic gadgets that aid in comfort, user friendliness and most important, safety. 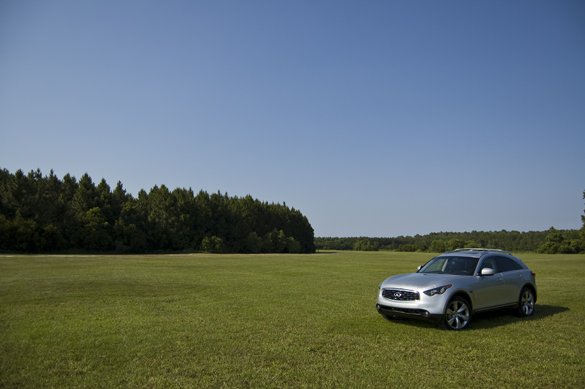 Our Infiniti FX50 came mostly loaded with Infiniti’s popular technology package and sport package. Both packages together incorporate enough gadgetry to launch the space shuttle. Each component whether it be the continuous dampening controlled suspension (CDC), the lane departure warning (LDW), rear active steer, adaptive front lighting system (AFS) or the distance control assist (DCA),  work together seamlessly and sometimes unnoticeable to the driver. The continuous dampening setting in Sport mode gives you a firmer ride while the Normal setting is good enough for every-day driving on smoothly paved roads. Anything more than a smooth road and you will have somewhat of a rough ride that may probably have more to do with the big 21-inch wheels. 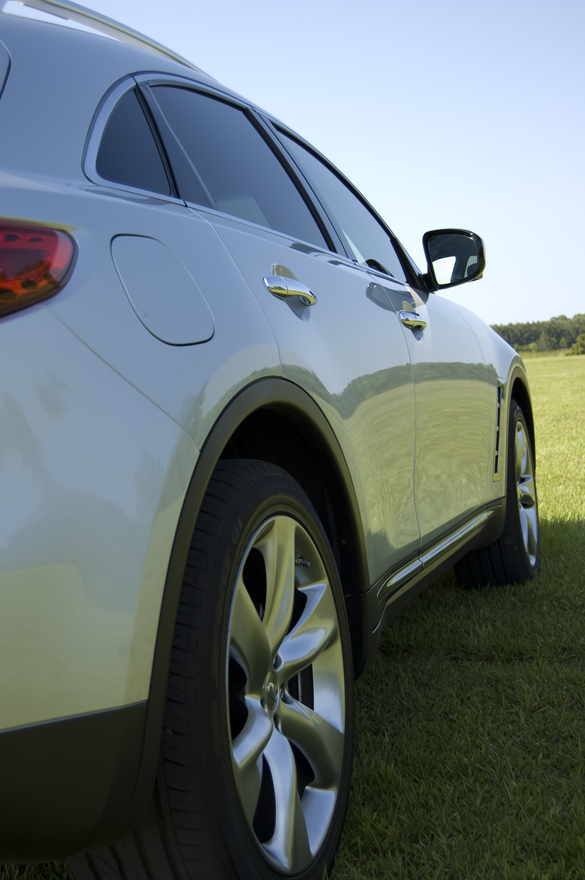 The bold stance of the FX makes it stand out from the normal crowd of crossover vehicles. The sweeping lines and subtle curves are pleasing to the eyes. When you see an FX roaring down the road getting closer in your rearview mirror it almost asks you to move to the slow lane because this beast means business.

Inside of the FX50S you will find a familiar interior layout from that of other Infiniti vehicles, which is a good thing. The controls are easy to reach and well laid out, however there are several redundant buttons and knobs providing up to 3 different ways of adjusting one feature. I don’t know if this is a good thing for some people as it may become confusing under some situations. From the long list of standard features on the FX50 it only leaves you with a few options to choose from outside of the two main packages that our test vehicle was equipped with. The 303hp V6 FX35 stablemate is somewhat of a different story but the price point, at $42,850 starts far below the FX50’s $58,400. 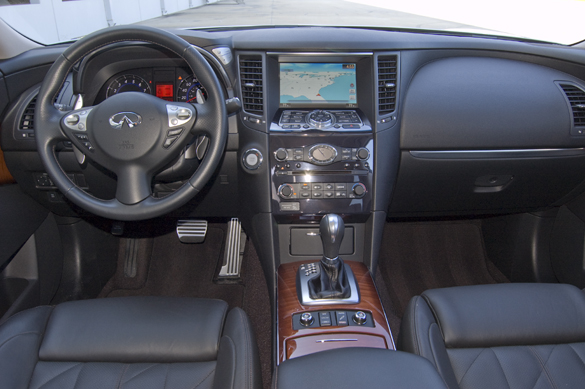 Besides the FX’s aggressive looks you can comfortably seat 5 adults. The two front passengers can enjoy the climate controlled and bolstered seats. Headroom is not a major issue up front but could be in the rear, as the sweeping roof starts close in. Cargo room is slightly less than other competitors but I really do not think many FX buyers will be too concerned about that in the luxury crossover segment. The hunkered-down silhouette really adds a sex appeal to the FX although you will give up some interior cargo area for the ‘looks’.

Performance is almost unmatched with the exception of only a few FX50S competitors such as the much pricier BMW X5M/X6M. The all-wheel-drive system, which is standard equipment on the FX50, optional on the FX35, works without any required interaction from the driver. Coupled with vehicle dynamic control (VDC), traction control system (TCS), 21-inch wheels and a powerful 5.0-liter V8 that produces 390hp and 369ft-lbs of torque, the FX50S is always agile and ready for virtually any type of driving situation you can throw at it on public roads. The FX50S is no slouch despite a curb weight of 4556lbs. The big V8 shows hardly any strain getting the FX50 up to speed. The 7-speed automatic transmission does a great job in managing all of that power while it adapts to your driving style. I hardly found myself using the shift paddles because the transmission worked ‘things’ out in a hurry anticipating what I was attempting to do. 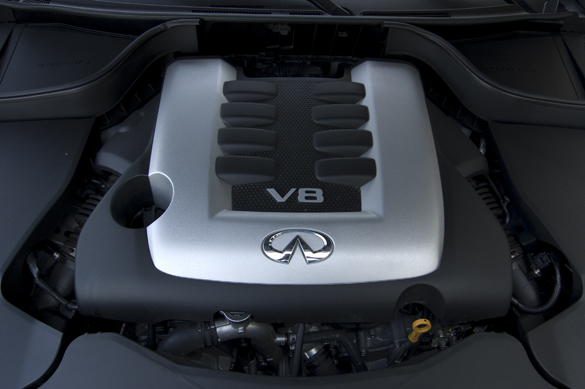 Being a luxury crossover, the FX50S still lacks some of the upscale amenities that you may find in a Land Rover Range Rover. In Infiniti’s defense I have to say that the value of a 2010 FX is spot-on. You get a lot for what you pay not to mention our test vehicle being almost fully-loaded tipped the price scale at $65,625. Features such as the around-view monitor system, which incorporates a series of cameras to ‘guide’ you into parking areas or tight spaces, is an added value that you do not find on some luxury vehicles that cost considerably more. What was missing that we found on crossover SUV’s half the cost of the FX50 is a power lift-gate. It could be possible that we will see this feature in the upcoming 2011 FX. 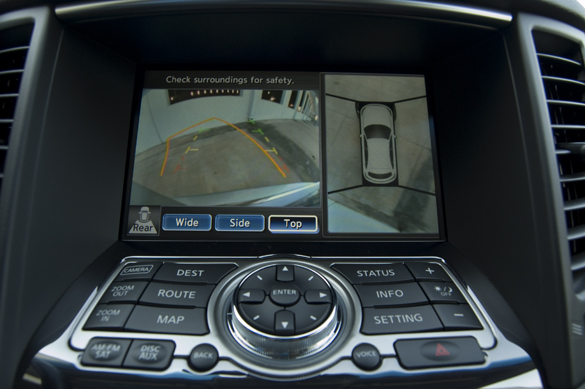 Driving the 2010 Infiniti FX50S is surely a pleasure. It is quite a beast that demands its space on the highway. This beastliness comes at a premium in the form of large amounts of premium gas. One downfall to having this much fun in a powerful luxury crossover is that it burns more than its fair share of gasoline. The 2010 Infiniti FX50 is rated at 14mpg city and 20mpg highway. Those are not impressive numbers but it all comes down to how you drive. If you are aggressive like me, then you will end up making a few trips to the gas station. We averaged about 17.4mpg during our trip to the beach and on the way back taking the interstate we were able to get 18.8mpg with 4 adults packed in the vehicle. Not too bad considering how much power you have on tap. It was rather enjoyable to get that V8 growl from the exhaust at just about every speed. It is nothing a turn of the volume knob on the 11-speaker Bose audio system with 9.3gb hard drive couldn’t fix. It is nicely integrated into the navigation system’s 8-inch color LCD screen with other built-in components allowing us to connect our iPhone via bluetooth and stream our music. 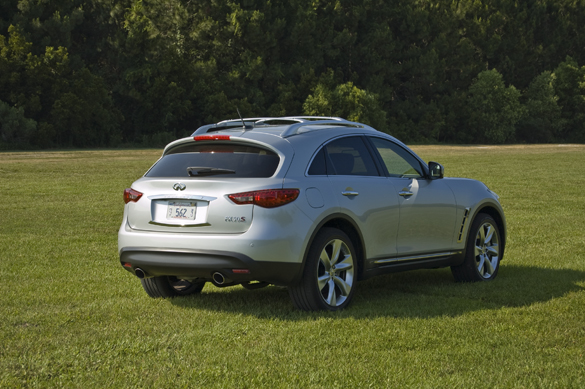 If you are in the market for a sporty, fast, worry-free and aggressively styled luxury crossover, then Infiniti welcomes you to get behind the wheel of a new Infiniti FX50.