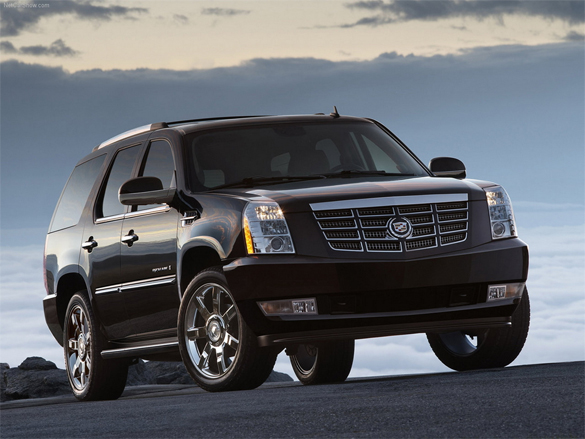 The Highway Data Loss Institute (HDLI) has released their new list of vehicles with the highest and lowest insurance claims for theft. The study takes into consideration the rate of insurance claims per vehicle and the cost of those claims. Insurance companies base their rates off of this data which is why those who happen to own one of the top 10 most stolen vehicles on HDLI’s list pay a higher insurance premium.

If there is any type of trend to be noticed from HDLI’s findings, it may be thieves are looking for big SUV’s, big trucks and fast cars that can be easily sold for decent amounts of money or the parts are in high demand.

ARLINGTON, VA – The rate at which people file insurance claims for theft is highest for versions of the 2007-09 Cadillac Escalade, a luxury SUV, followed by the Ford F-250 crew pickup, Infiniti G37 luxury car, and Dodge Charger with a HEMI engine. Theft rates for these vehicles are 3 to 5 times as high as the average for all vehicles. These are the latest theft loss results for passenger vehicles 1 to 3 years old published by the Highway Loss Data Institute (HLDI), an affiliate of the Insurance Institute for Highway Safety.

Overall theft losses take into account not only the rate at which insurance claims are filed but also the size of the payments for claims, and most of the vehicles with the highest overall theft losses are SUVs and large pickups. The Escalade has ranked worst in overall theft losses in 6 of the past 7 HLDI reports. In fact, all 4 versions of the Escalade head the list of the worst overall losses for theft, with average yearly losses more than 7 times the average for all passenger vehicles. The Escalade EXT 4-door 4-wheel-drive has the highest theft losses of all, with $146 in theft payments per insured vehicle year. This is more than 10 times the $14 average theft payments per year for all passenger vehicles.

The vehicle group with the highest overall theft losses ($82 in theft payments per year) is very large luxury SUVs. Losses for these vehicles are nearly 6 times as high as the $14 average for all passenger vehicles. Very large pickups have the second highest overall theft losses, at $57 per insured vehicle year, and 2-door minicars have the lowest at $4 per insured vehicle year.

Almost 1 of every 4 Escalade theft claims is for $40,000 or more. These vehicles are equipped with standard antitheft ignition immobilizers that are supposed to prevent them from being started without a proper key. The problem, Hazelbaker says, is that “even though Escalades have the latest immobilizer technology, thieves still can put them on flatbeds and haul them away.”

HLDI’s are the only reported theft results based on the number of insured vehicles on the road. Information on theft losses published by the National Insurance Crime Bureau doesn’t take into account the number of each vehicle insured, so the most popular vehicles on the road tend to top this organization’s list of most-stolen vehicles. This doesn’t tell an individual owner how likely a particular car is to have a theft claim. To answer that question, HLDI identifies vehicles with the worst theft losses by counting the number of insurance claims by make and model relative to the number of each make and model insured. This indicates the vehicles that are most likely to be theft targets, taking into account their exposure on the road.

New to the worst list: The Chevrolet Corvette Z06, a high-performance midsize sports car, isn’t stolen nearly as often as the other vehicles on the worst list, but claims are expensive when the Z06 does go missing. The average size of an insurance claim payment is $41,229. This compares with $10,118 for a Dodge Charger with a HEMI engine, a large family car that makes the worst list mainly because of how often it’s stolen.

Pickups are a group to watch: “In many cases it’s tough to pinpoint exactly why a vehicle becomes a theft target,” Hazelbaker says. “Investigators tell us big work trucks like the Ford F-250/350, Chevrolet Silverado 1500, and Dodge Ram 2500 are attractive not only because of the vehicles themselves but also because of the tools and cargo they carry.”
HLDI results take into account theft of a vehicle and also vehicle content. Overall theft losses for pickup trucks climbed steadily between 1999 and 2006 as the US economy boomed but now are decreasing. Still, as a group these vehicles have losses that are at least twice those of cars and SUVs.

Best theft losses: The Volvo S80, a large luxury car, leads the best list with overall losses equal to 4 percent of the average for all passenger vehicles. Next best are the Saturn VUE 4-wheel-drive midsize SUV and Nissan Murano midsize SUV. The Toyota Prius, a hybrid car, also ranks among the top 10. The 10 best vehicles have overall theft losses less than 15 percent of the average. Average payments for a theft claim are less than one-third the average.

Long-term trends: Since 1998 the frequency of theft claims for cars and SUVs has declined while average insurance payments per claim have increased. Frequencies have dropped the most for SUVs, declining from 4.9 claims per 1,000 insured vehicle years in 1998 to 2.4 in 2008. (An insured vehicle year is 1 vehicle insured for 1 year, 2 for 6 months each, etc.)
For pickups, the downward trend in claim frequencies that began in 1998 reversed in 2001 and increased through 2006. Meanwhile, average insurance payments per theft claim have risen the most for pickups. SUVs had the highest average payments per claim until 2005, when results for pickups overtook those for SUVs.