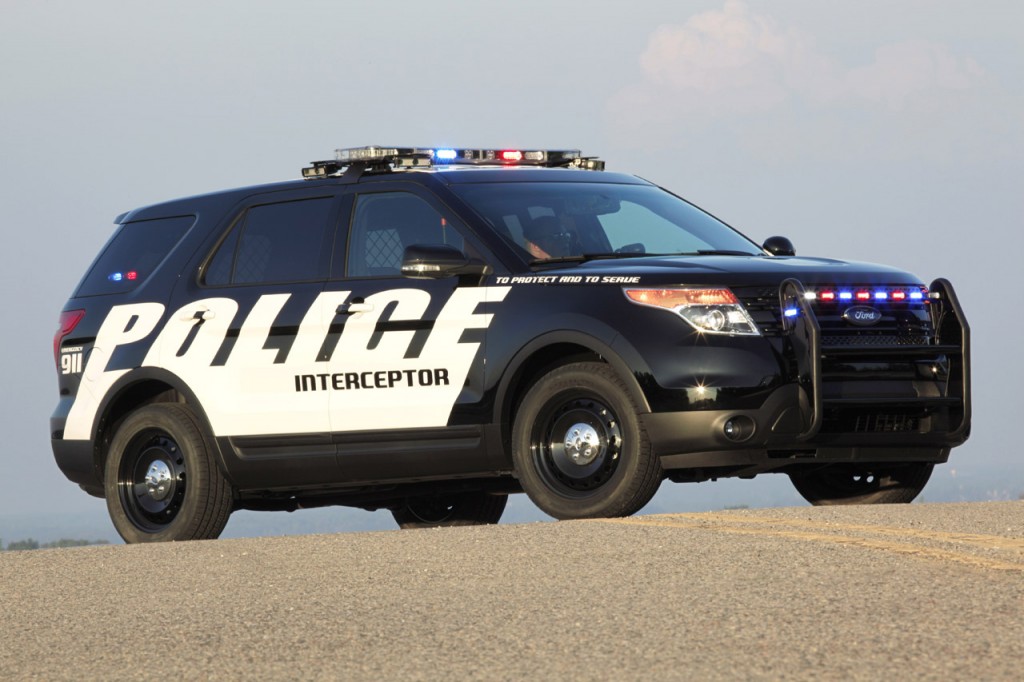 Ford has revealed its new Ford Explorer Interceptor Utility which looks like it will get the job done for running down and hauling several ‘none-law-abiding citizens. I must say, this is probably one of the coolest looking Police SUV’s next to a murdered out Chevy Tahoe Police Interceptor lowered on police issue suspension and black steel wheels.

A first for police vehicles would be an integrated SYNC system connected to police communication and audio equipment. This could possibly greatly reduce the time it takes for an officer to enter a tag number. And you thought RoboCop was cool in his futuristic Ford Taurus Interceptor.

The new vehicle is designed to complement Ford’s all-new Police Interceptor sedan, which was introduced earlier this year. Combined, the two vehicles provide law enforcement agencies the ultimate in versatility and choice, something no other police vehicle on the road today can match.

“We understand today’s police departments require adaptability,” said Mark Fields, Ford’s president of The Americas. “Ford is committed to remaining the nation’s largest provider of police vehicles, and we’re offering law enforcement officials a complete portfolio of options that are purpose-built, capable and delivered with the safety, technology and performance they need to excel at their jobs.”

Ford, the police vehicle market leader for 15 years, developed both Police Interceptors to allow departments to maximize versatility without sacrificing quality. Both vehicles will debut simultaneously and be offered without interruption when production of the Ford Crown Victoria Police Interceptor ends in late 2011.

Meeting a spectrum of needs

With the introduction of its newest Police Interceptor, Ford now provides a complete package of performance and capability designed to meet the diverse and ever-increasing needs of law enforcement agencies across the U.S.

Both the sedan and utility are rated for the severe-duty cycle that police professionals undertake on a daily basis and will deliver at least 20 percent more fuel efficiency than the 4.6-liter single overhead cam (SOHC) V8 offered in the current Crown Victoria Police Interceptor.

When developing the next-generation Police Interceptors, Ford worked with its Police Advisory Board of law enforcement professionals to provide input on key vehicle attributes such as safety, performance, durability, driver convenience and comfort.

“The combination of both the sedan and utility versions of the Police Interceptor allows Ford to deliver a complete, diverse and efficient solution to all of law enforcements’ pursuit needs,” said Ken Czubay, vice president of Marketing, Sales and Service. “These vehicles were developed step-by-step with our valuable Police Advisory Board, so we have had customer feedback throughout the development process and provided an efficient solution for fleet managers.”

The Police Interceptor utility vehicle features Ford’s exclusive Safety Canopy® side-curtain airbag rollover protection system that helps protect passengers in both rollover and side-impact crashes. The multiple side-curtain airbags use Ford’s unique roll-fold technology to help position them between the occupant and the side window.

Unique to the utility vehicle is Ford’s state-of-the-art curve control technology, designed to help drivers maintain control of their vehicles when taking curves at high speeds. Curve control senses when a vehicle is entering a curve too quickly, and can apply four-wheel smart braking to reduce vehicle speed by up to 10 mph in approximately one second and help drivers follow their intended path.

Just like its sedan partner, Ford’s Police Interceptor utility vehicle has been put through its paces, undergoing a battery of torture tests to ensure its individual components can hold up to rigorous driving. Certification testing designed by the Michigan State Police and the Los Angeles Sheriff’s Department proved out the durability and capability of the vehicle through a variety of punishing tracks.

To make sure the utility vehicle can take the heat – quite literally – the AWD drivetrain is equipped with a water-cooled power transfer unit that guarantees capability in all conditions. Across the board, brakes have been increased in size and performance, and the cooling package features a heavy-duty alternator and larger radiator. Standard 18-inch wheels are vented, designed to work in concert with the enhanced brake system.

Even so, the utility vehicle is light, precise and easy to handle. “Officers won’t need any special training to drive this,” said Carl Widmann, vehicle engineering manager. “The advanced technologies and similar driving dynamics of Ford’s new Police Interceptors provide officers the flexibility, convenience and ease of driving utility or sedan police vehicles.”

Functional, inside and out

Inside, the functionality continues, with the vehicle’s interior package uniquely designed for the needs of police, maximizing officer comfort and cargo capacity. The front seats are designed with a lower bolster to accommodate utility belts, and just like the sedan, Ford’s Police Interceptor utility offers a column shift, designed to leave the console area free for the ever-increasing amounts of equipment necessary for officers to do their jobs.

The second row features a vinyl, easy-to-clean bench seat that folds flat for versatility. Because police require a lot of gear, additional space in the utility provides plenty of room for K-9 officers and SWAT operations, including room for the full-size spare tire to be stored safely under the cargo area.

• BLIS® (Blind Spot Information System): The system uses two radar sensors located in the rear quarter panels to detect vehicles in the surrounding lanes. If a vehicle enters the driver’s blind spot zones, the system alerts the driver with a warning light in the sideview mirror.

• Cross-traffic alert: This system uses the existing BLIS radar modules to sense oncoming traffic when slowly backing out of a parking spot. This industry-exclusive system functions only while the vehicle is in reverse and warns when cross traffic appears within three car-widths.

• Rear view camera: When the vehicle is in rear camera mode, a color image with guidance markers on the rearview mirror will assist the driver in backing up.

• Reverse Sensing System: An audible tone will alert the driver to certain objects up to 6 feet behind the vehicle.