Is Toyota Working On A Prius Pickup? 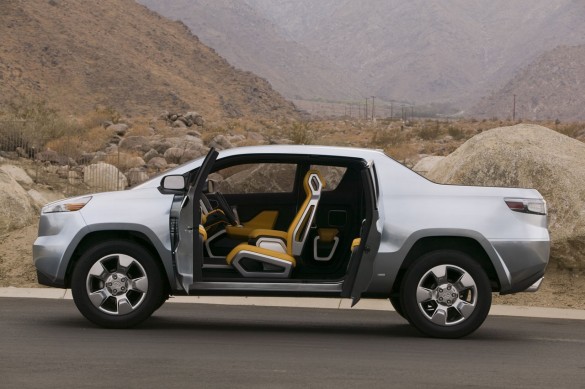 It’s no secret that Toyota will be expanding their Prius model line to include a five door minivan (the Prius V) and, eventually, a compact hatchback based on the Prius C shown at this year’s Detroit Auto Show. In the “truth is stranger than fiction” category, Pickup Trucks.com is reporting that Toyota could revive their A-BAT concept and stuff a hybrid drivetrain under the hood. The A-BAT (for Advanced Breakthrough Aero Truck) was shown at the 2007 Detroit Auto Show, and featured a lightweight unibody construction and hybrid power train. It was quite a bit smaller than the current Toyota Tacoma, so the A-BAT would revive a long dormant segment of the truck world: the subcompact pickup truck.

Don’t start haunting your Toyota dealer just yet, as the speculation is based on a comment from Bob Carter, Toyota’s Group VP and general manager. When asked if a pickup could join the Prius family in the future, Carter was vaguely ambiguous in saying, “It’s not off the table, but nothing is decided at this point.” To clarify his statement, Carter added, “The pickup truck has been very volatile over the past few years. We’re trying to understand what pickup truck consumers are going to want in the future. Right now with the Tacoma in the compact truck market, we have nearly a 45 percent market share. The consumer says for that truck market that they still want a rugged body-on-frame.”

Given that Ford has abandoned the declining compact truck market in the United States, I’d be surprised if Toyota spent the R&D money necessary to create a compact, hybrid pickup. Truck buyers want capabilities that hybrids simply don’t provide, and hybrids aren’t designed for the kind of punishment truck owners dish out. Is it possible? I suppose, but I’d call it as likely as Lamborghini building an electric urban commuter.