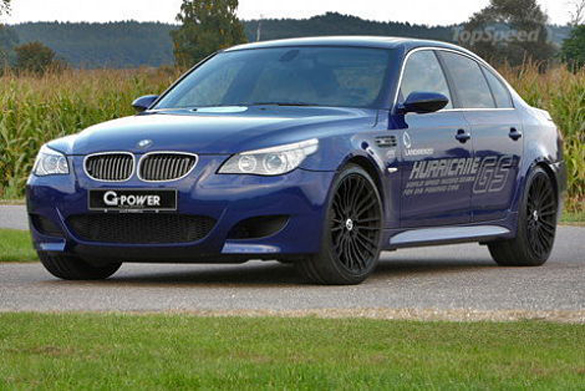 When I think of propane gas, I think of my Weber barbecue grill, or maybe even my vertical smoker. I don’t think of 660 horsepower Bavarian übersedans that can get me to sixty miles per hour in less than 5 seconds, on the way to a top speed of 201 miles per hour. If the mad scientists at Germany’s G-Power have any say on the matter, my perspective on LPG powered cars is about to change.

G-Power started with a Hurricane RS, converted it to run on LP gas and bolted on a G-Power SK II bi-supercharger. Next came their Speed-Flow exhaust system, a coil over suspension, upgraded brakes and 20” Silverstone Clubsport wheels shod with Michelin rubber. Turning those expensive 285/30-20 tires into white smoke simply takes a generous application of the throttle; if you buy this car, it’s probably a good idea to keep a tire retailer on speed dial. It’s definitely a good idea to keep an attorney specializing in traffic law on retainer.

The Hurricane GS has earned the distinction of being the world’s fastest LPG vehicle, and G-Power would be happy to build you one of your own. You need to ship them your current M5, then write a check for $43,500 and wait for delivery. If you just like the wheels and tires, G-Power will make your current M5 look like a Hurricane GS for a mere $9,900. There’s no word if a bun-warming-rack is an underhood option, but I suppose you could build one easily enough.

I’m not generally a fan of green cars, since they’re usually as amusing to drive as a golf cart, but the Hurricane GS could change my perspective on that. If saving the planet means I have to drive a 660 horsepower barbecue grill, so be it.