Recently minivan sales have been on the decline overall which is understandable considering how many new SUV and crossover offerings are available for families. Two Japanese minivans that help keep the American ‘van’ segment alive, (alongside of American minivans), are the Toyota Sienna and Honda Odyssey.

In the parking lots of shopping centers, schools and even amusement parks, you see an abundance of minivans intertwined with the dominating numbers of SUVs and crossovers. The minivan still remains to be a viable alternative for large families that do not want to shell out 50 grand or more for a large gas guzzling SUV. Even if it’s only for the sake of comfortable and reliable transportation and this is where vehicles like the new 2011 Toyota Sienna and 2011 Honda Odyssey fill the gaps. 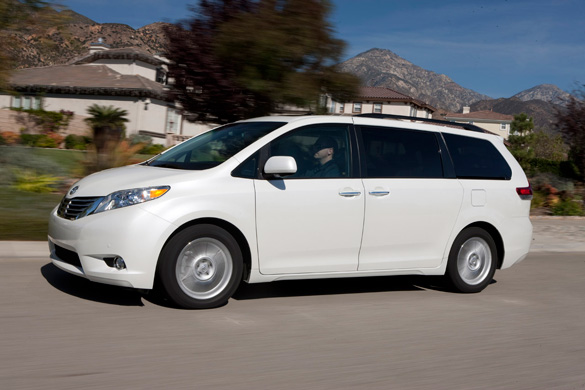 The new 2011 Honda Odyssey is the only minivan whose sales have increased over the past year. That does not mean the 2011 Toyota Sienna is any worse, which is why we spent some time with both vehicles for a comparison test. 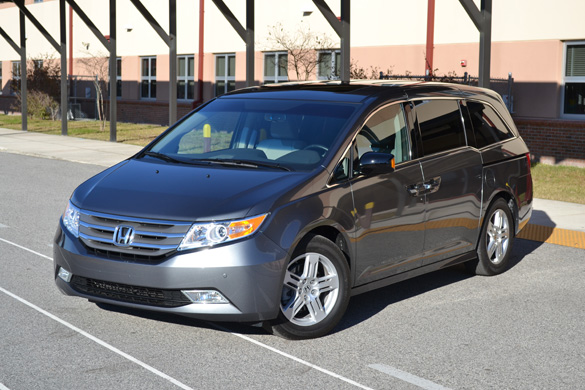 The new 2011 Honda Odyssey remains to be at the top of its class offering the sportiest feeling out of any other minivan that I have driven. Honda redesigned the Odyssey for 2011 but didn’t sway too far away from what has worked for them over the past 16 years, including the last generation introduced in 2008. Styling has become a bit sporty over the years easing that ‘shameful’ feeling some pride-stricken fathers may get when seen driving the family van. But don’t let the sportiness fool you, the 2011 Odyssey is still a very functional minivan accommodating for all members of the family. 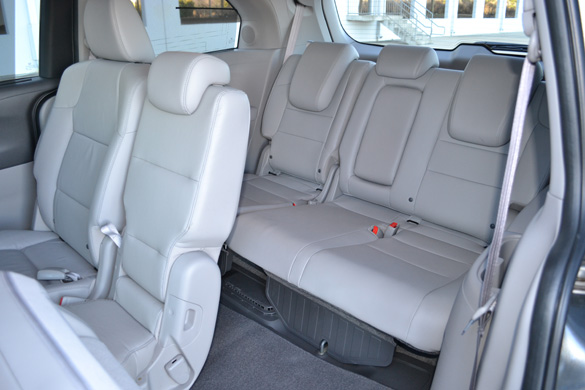 The new 2011 Toyota Sienna could almost pass as a distant cousin of the new Odyssey where they both offer comparable styling and class. Although Toyota has had their fair share of recalls leading to quality propaganda, they are still the same company the makes best sellers and cater to the average American family with reliable vehicles. Just like the 2011 Odyssey, the 2011 Toyota Sienna has been completely redesigned.

The introduction of the 1998 Sienna proved how an over-seas automotive company can truly compete in America when the segment was dominated by the folks at Chrysler with their minivans. Now for 2011 the Toyota Sienna, just like the new Honda Odyssey, has something for the whole family such as 7 or 8 passenger configurations, power sliding doors, widescreen DVD entertainment system, tri-zone climate controls, 6-speed automatic transmission and a powerful V6 engine. 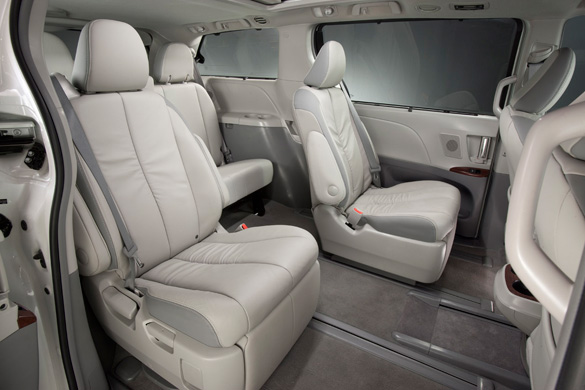 Were our 2011 Toyota Sienna XLE and 2011 Honda Odyssey Touring test vehicles differentiate is on the inside. The interiors of the two are very different especially when it comes to the dashboard and seating positions. You have to wonder: How different can two comparable Japanese minivans be when it comes to the interior? It is easy, the Toyota Sienna somehow does not use the traditional styling for interiors as found in vehicles such as the Camry. On the other hand, the Honda Odyssey, despite having a more desirable dashboard look and feel than the Sienna, suffers from lack of a comfortable seating position for the front passengers, mainly the driver. What use is it having a minivan if the driver cannot be comfortable? 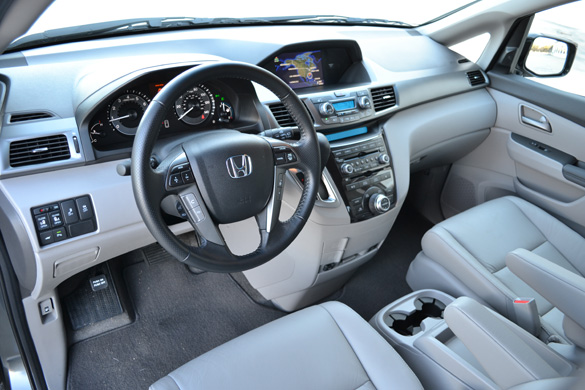 The 2011 Sienna has cheap-looking plastics all over the dash area that does not live up to what you expect from Toyota. The Honda Odyssey also has a lot of plastic on the dash but it does not look nearly as cheap as the Sienna’s. It could be a balancing act for the front row (driver & front passenger) seats considering a 6-foot tall person will not be comfortable in the driver’s seat of the Odyssey but has more adjustability in the Sienna. 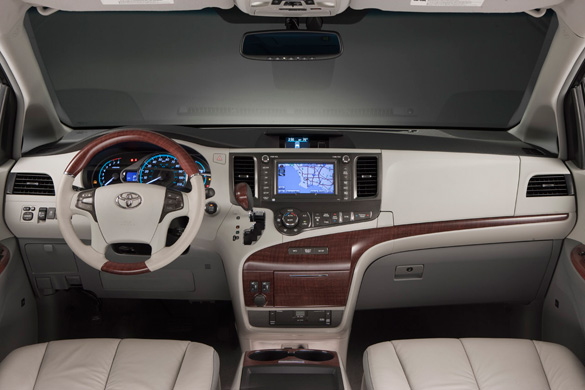 Moving back to the second row seats, the Sienna has a lot of adjustability where kids or adults any size would find a comfortable position. The long seat rails on the floor allow the seats to slide back and forth almost a couple feet where the Honda Odyssey may appear to be more of a challenge for ‘bigger’ adults. You can still find your optimal seating position for the second row in the Odyssey as well as in the third row. As you would expect, the third row seating for both the Sienna and Odyssey tend to be a little thinner with the padding but allows the seats to be folded down in the lower rear storage areas leaving a flat cargo area much larger than most SUVs.

If you have seen the ‘Swagger Wagon’ commercials on TV, then you know that the Sienna is marketed as being a ‘hip’ or ‘cool’ vehicle that any member of the family does not mind being seen in. That can also be said about the Honda Odyssey. I think the Odyssey is probably the best looking minivan on the street with the new Sienna coming in at a strong 2nd place. The Sienna appears to be bigger than the Odyssey, which by cargo volume numbers it is. Strangely enough, the Honda Odyssey is bigger and wider on the outside than the Sienna. Slightly more cargo volume in the Sienna is probably contributed to the longer wheelbase and higher roofline than that of the Odyssey. 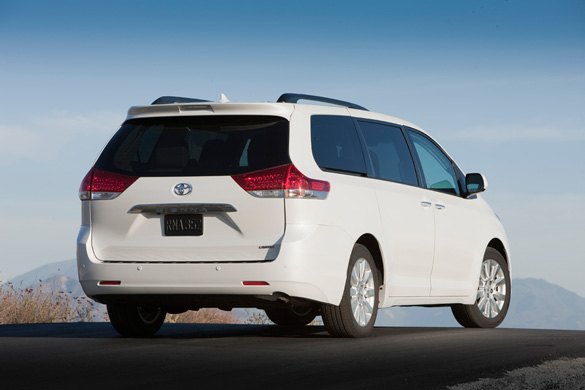 Performance in a minivan is not really the first question you ask a salesperson when shopping for one of these family haulers. Even though performance is a secondary factor when looking for a minivan, it is still very relevant especially when it comes to fuel economy. After-all, minivan families tend to actually go places and travel on long trips. In this department both the Sienna and Odyssey have good numbers for city driving. Highway gas mileage is where you will find your larger contrast. The 2011 Sienna XLE V6 gets 18mpg city and 24mpg highway while the 2011 Odyssey Touring Elite edition gets 19mpg city and 28 mpg highway. Keep in mind that both our test minivans had a V6 engine producing only an 18hp difference. For 2011 the Toyota Sienna has an option of a 2.7-liter 4-cyl engine producing 187 horsepower and 186 foot-pounds of torque while our test Sienna XLE vehicle was equipped with a 3.5-liter V6 producing 266 horsepower and 245 foot-pounds of torque mated to a 6-speed automatic. Our 2011 Honda Odyssey Touring Elite edition was fitted with the standard VTEC 3.5-liter V6 engine producing 248 horsepower and 250 foot-pounds of torque mated to a 6-speed automatic. The LX, EX and EXL version of the Odyssey only comes as a 5-speed automatic which may not get as good gas mileage as the Touring and our Touring Elite edition with a standard 6-speed auto tranny. 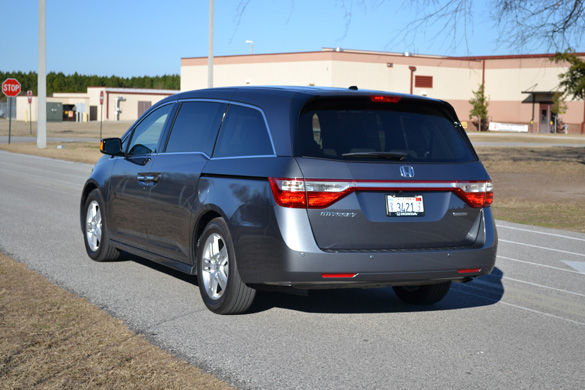 Both of our test vehicle configurations make for a quick minivan that still reassures your confidence even when you have a full load of 7 other passengers. That probably cannot be said for the 4-cylindar version of the Sienna, which we have not yet tested.

Our 2011 Honda Odyssey Touring Elite edition comes at a premium in terms of price. It is one of the most expensive minivans on the market coming in at a tested price of $44,030. At this price a buyer may want to consider taking a gander at some large SUVs. With the Odyssey Touring Elite edition you do get plenty of options and creature comforts such as an ultrawide 16.2-inch DVD entertainment system, 650-watt stereo system with Bluetooth audio streaming, voice activated GPS navigation, blind spot information system, and a cooling cool-box for keeping sandwiches cold on those long trips. However, a base 2011 Honda Odyssey starts at just $27,800. 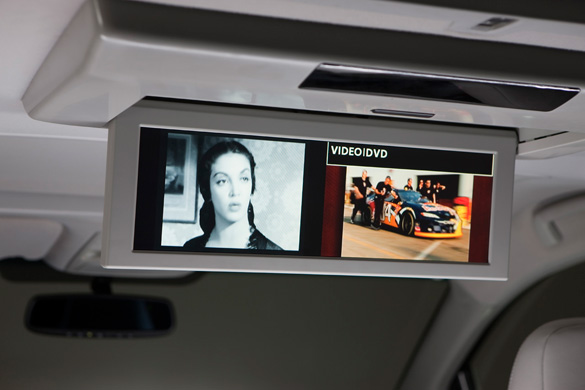 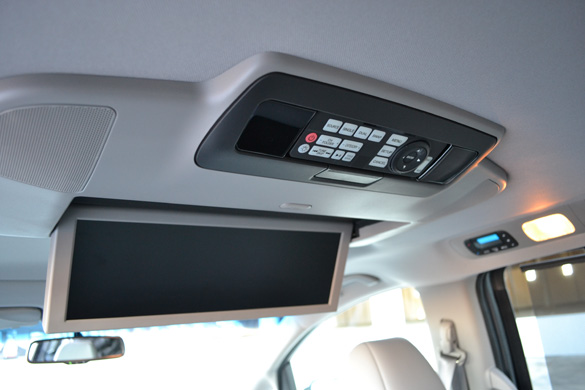 In all, both the 2011 Toyota Sienna and Honda Odyssey offer great versatility and quality craftsmanship in a minivan. We would place the new Honda Odyssey in 1st place and the Toyota Sienna in second if the price were not such an important factor. With the Honda Odyssey not offering much ‘more’ than the Sienna, we could not justify the extra $4,426 for a comparably optioned-out minivan. Both vehicles are great but our heart is set on the Toyota Sienna. It has a certain swagger about it that makes us get over the cheap looking dashboard. The Honda Odyssey is a great runner-up offering a sporty gas-saving minivan, something no one else has pulled off so well.