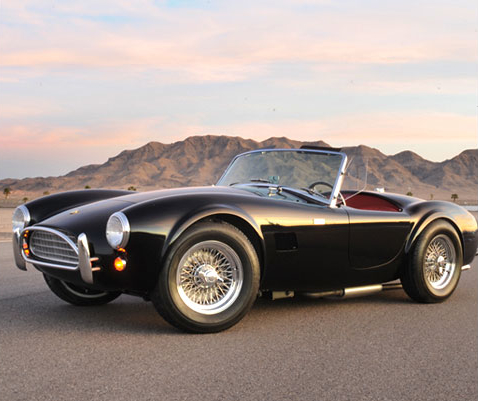 It’s hard to imagine, but it’s been fifty years since mad genius Carroll Shelby first blended the chocolate of the A.C. Ace body with the peanut butter of the Ford V8. The result was the Shelby Cobra, which would go on to be perhaps the most iconic automobile of all time. It’s certainly the most recreated, with aftermarket companies ready, willing and able to sell you anything from cheesy fiberglass over unibody kits to hand-hammered aluminum bodies over steel space frames. All those options have one thing in common: they may look like a Cobra, but they don’t come from Shelby.

Shelby American still builds Cobras as part of their continuation series. They’re sold as rollers, which allows Shelby American to bypass a whole lot of issues they’d rather not have to deal with (emission control, for example). Customers can add the engine and transmission of their choice, depending upon their budget and willingness to cheat death on a regular basis. To commemorate the 50th anniversary of the Cobra, Shelby American has announced a limited production run of 50th Anniversary cars, all done in Shelby black with a wine colored leather interior and wire wheels. The cars get special Wilton Wool carpeting and 50th Anniversary commemorative badging, and each will get a serial number ranging from CSX8950 through CSX8999.

As you’d expect, the anniversary Cobras won’t come cheap. Prices (for a rolling body, sans engine and transmission) start at $69,995 for fiberglass bodied car and jump to $134,995 if you want one made from aluminum. There’s a good chance that these cars will appreciate, but buyer beware: in a lot of collectors eyes, these really aren’t the same thing as an “original” Cobra. Of course an original Cobra is so valuable that it can’t be driven on the street with any regularity, so maybe the best reason to buy a continuation Cobra isn’t for an investment. Interested? Check out the Shelby American website for details on ordering.