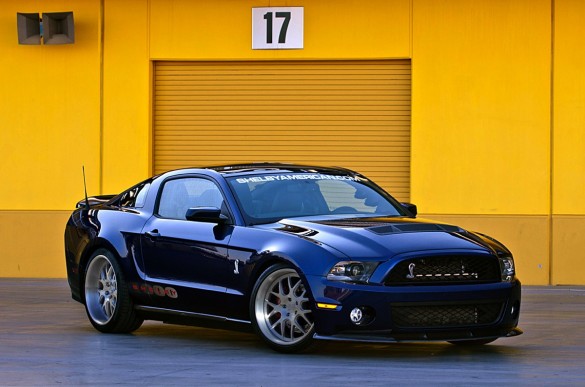 When it comes to horsepower, how much is too much? Some would argue that Ford’s upcoming 2013 Shelby GT500, with its 650 horsepower off the showroom floor, already pushes the boundaries. Most would agree that Shelby American’s 800-horsepower Super Snake comes close to offering too much horsepower, but now comes word that the Nevada-based customizer has topped even that effort.

At the upcoming New York Auto Show, Shelby American will launch the Shelby 1000, a limited-production Mustang that delivers 950 horsepower in street trim (and on pump gas), or as much as 1,100 horsepower in a track-use-only version. Shelby starts by gutting the 5.4-liter V-8 engine, installing stronger internals and a larger blower. Next, the heads are worked to improve flow, then Shelby’s tuners go to work building unique fuel maps for the car, based on the type of gas you’ll be running.

As you’d expect, the car gets a beefier 9-inch rear end and a solid driveshaft, since getting that much power to the pavement through the rear wheels only will be challenging. If it was hard to launch an 800 horsepower Mustang, launching a car with 25-percent more power isn’t going to be any easier.

As is usually the case with anything wearing a Shelby badge, the price is astronomical. Once you’ve procured a 2012 Shelby GT500 donor (which should set you back around $50,000), Shelby American will charge you another $150,000 to build a limited production Shelby 1000 out of it. Options, for which there are plenty, only add to the price.

That’s serious money, even for a car that puts out four-digit horsepower, and we can’t help but wonder if it’s all about bragging rights. Limited by the size of the rear tires’ contact patch, we seriously doubt the Shelby 1000 will be significantly quicker than the Shelby Super Snake (or even the new Shelby GT500). If you can’t get the power to the ground, what difference does it make how much your engine puts out?