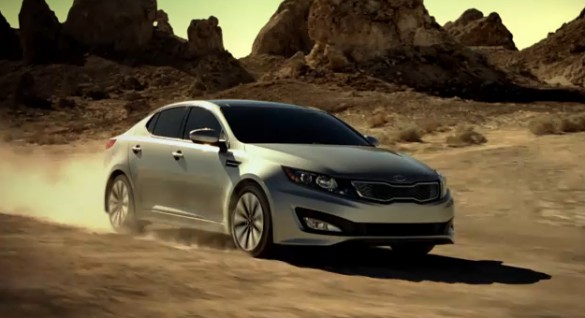 Let’s face it: if your team isn’t playing in the Super Bowl, half the game’s entertainment value is going to come from the ads. Every single advertiser pulls out all the stops to film a budget-blowing spot for the Super Bowl, because it ensures they’ll get their product in front of millions of beer and hot-wing fueled television viewers. Short of staging your own halftime “wardrobe malfunction”, there’s no better way to build brand awareness than with a Super Bowl ad that stands above the rest.

Kia is on a roll these days, launching one successful new model after another. The new Optima is a stunning car, and its quality is on par with anything else on the market these days. Kia’s already known for their Super Bowl ads, since it’s kind of hard to forget a marital aid getting down with a sock monkey on a road trip. How to top that for this year? I won’t spoil the video (below), but I’ll say this: it’s got super villains, aliens, and hopped up Mayans (or Aztecs; I always get them confused).

Chevy’s ad for the Camaro, on the other hand, just doesn’t cut the mustard. Sure, it’s got good visuals (and a stunning blond), but where’s the plot? where’s the build-up, where’s the conflict, where’s the resolution? Why do I get the feeling that the narrative is exactly how the ad agency came up with the idea? Like the bulk of their “Chevy Runs Deep” ads, this one just leaves me scratching my head and thinking about what could have been.