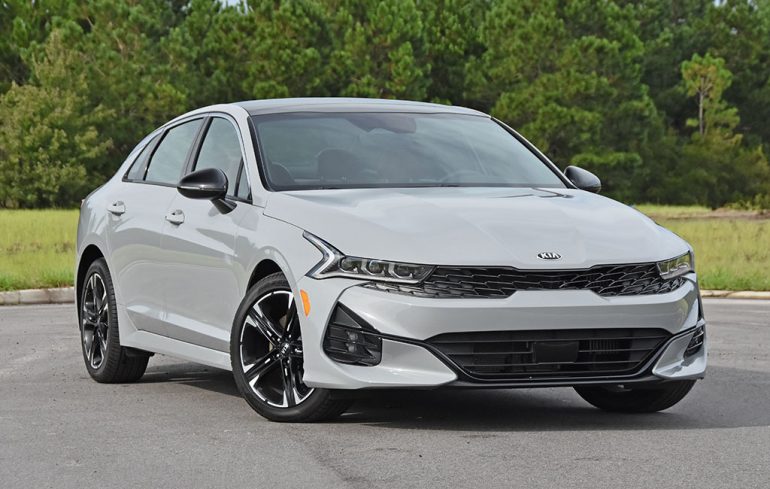 The saying of cars are becoming way too expensive is basically a broken record nowadays as I look over past reviews wondering how did we arrive here. However, there are glimmers of hope in finding a decent new vehicle for a good value, and the Korean brands have nearly cornered the market on such with all-new vehicles like the 2021 Kia K5, a midsized sedan that practically checks all of the boxes for an exceptional mainstream value.

The 2021 Kia K5 replaces the Kia Optima and continues a tradition of giving the masses just what they desire in a midsized mainstream sedan. The new Kia K5 attempts to elevate its value proposition with eye-catching styling, an area that no longer fades into the background of vanilla sedans. My new Kia K5 GT-Line test vehicle does a little extra to garner attention with sporty accents and trim throughout the exterior over the normal trims of the K5, which gets us ready for a performance-injected 290-horsepower K5 GT that comes to the lineup later this year (available November 2020). 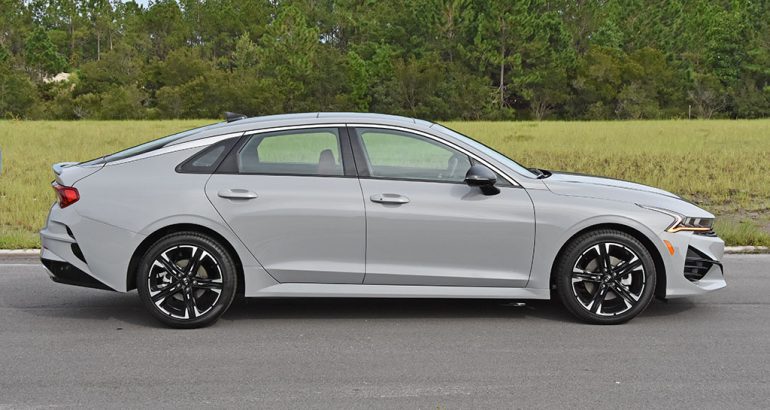 My week with the 2021 Kia K5 GT-Line takes on a surprising life where I first didn’t expect much out of the K5, but onlookers proved otherwise with their googling eyes and snapping heads when the K5 graced their presence. The new K5 in its sporty GT-Line trim looks the proper part of a sporty midsized sedan, one that has a nice premium appeal to its overall theme, inside and out. In a nutshell, the styling of the K5 doesn’t attempt to mimic anything else on the road – it does it styling on its own terms, it seems, from its right amber-colored LED daytime running lights up front and front/rear chiseled fascias, to its sleek almost-coupe-like body lines and unique color offerings such as on my Wolf Gray test vehicle. 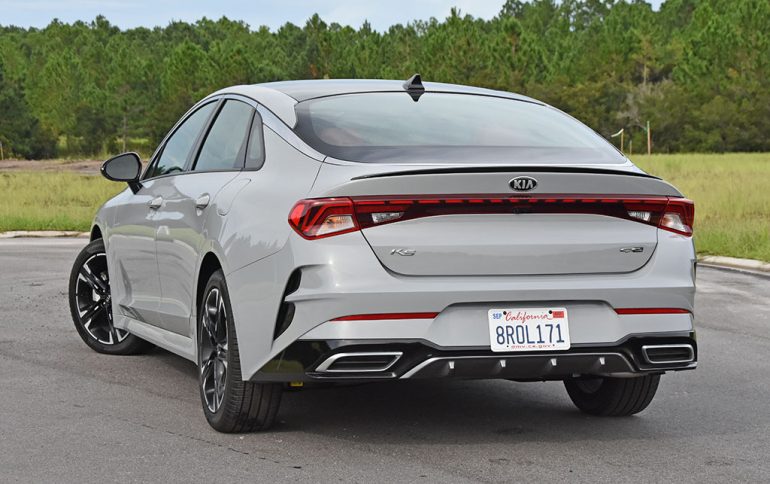 Powered by the brand’s latest 1.6-liter turbocharged 4-cylinder engine mated to an 8-speed automatic transmission, the Kia K5 provides an efficient powertrain, which can be had in either front-wheel-drive or all-wheel-drive as an option. Output is rated at 180 horsepower and 195 lb-ft of torque, which may not be large numbers on paper, but the K5 feels adequate enough out on the road. You’re not going to win many races in the new K5 as 60 mph comes in about 7.9 seconds from our tests. The driving character is very refined, if not a bit soft in its power application and shifts from the 8-speed automatic transmission. I found that demanding mid-level power was a slow experience for the transmission hitting the proper gear upon a downshift, and the throttle response appears to be somewhat delayed at times. The engine provides good power, especially through the mid-range of the RPM band. In my assessment, I believe the refinement of the powertrain gets in the way of performance but delivers for smoothness and efficiency. However, there’s a new K5 GT with nearly 300 horsepower on its way to the lineup to fix all of that. In the area of fuel consumption, the K5 does very well to meet its excellent EPA estimates of 27 mpg city, 37 mpg highway, and 31 mpg combined. Achieving such numbers are done without an annoying start/stop/idle stop and go system, which isn’t offered on the new K5. Thanks Kia! 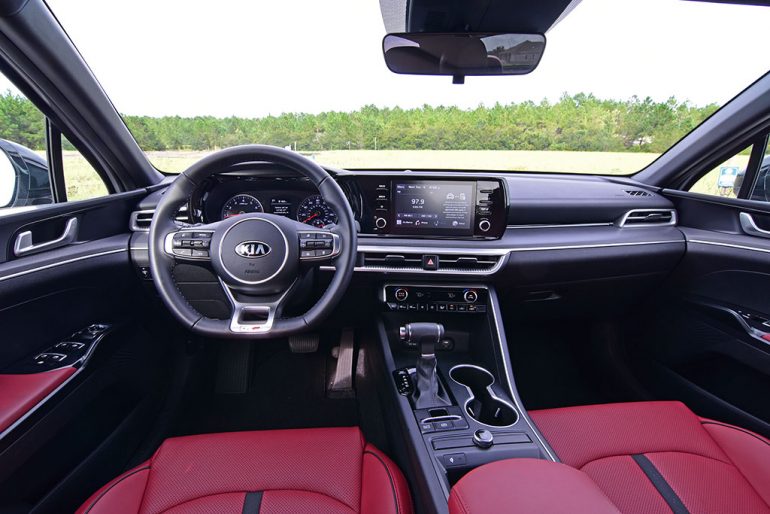 The ride quality of the K5 is really good, considering I have had my run-ins with not liking suspension setups from other Kia vehicles in the past. The K5’s suspension does well to keep body motion in check with a smooth initial feel of the overall ride. With the GT-Line adding a few sportier accents inside and out, there’s almost no difference in the way it drives from other trim levels other than having a bit more grip from its larger 18-inch alloy wheels over the standard 16-inch wheels. 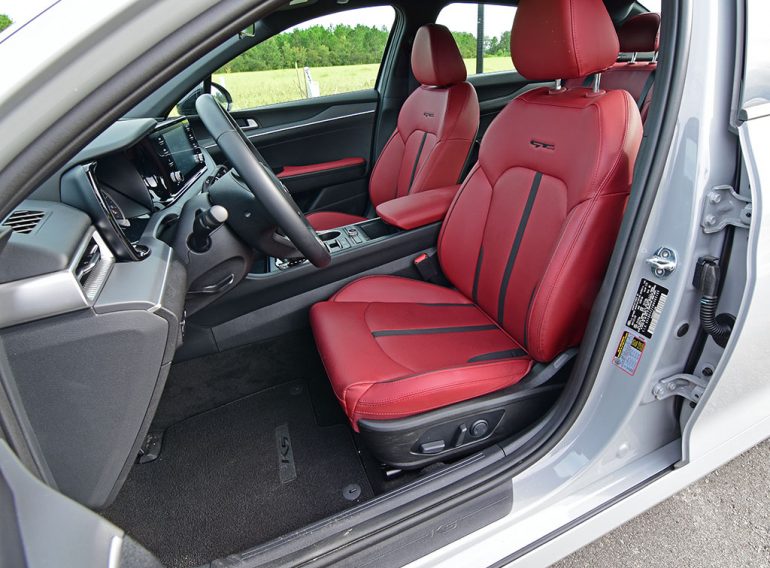 Inside the new 2021 Kia K5 is a new approach to offering a premium-looking cabin without premium materials. There’s a neat play on your eyes throughout, with faux stitching on plastic panels and many other hard plastic surfaces that do good to pull off magic trick until you touch the surfaces. The top dashboard surface is mostly soft-touch outside of the top of the driver’s gauge pod area. There’s a smallish color LCD screen for vehicle information in the center of the cluster that flows nicely into the same plastic housing where the 8-inch infotainment touchscreen resides. The infotainment unit is simplistic in its use but offers wireless (Bluetooth) Apple CarPlay and Android Auto, the wireless part being something that is very limited in its current use only in the luxury landscape. Kia is wise for offering such a feature, but I found only to work about 75% of the time where the system would not connect to my iPhone at times and drop connections even when you manually attempt to connect it through the screen well after pre-configuring your Bluetooth connectivity settings. Such a hiccup could drill down to pre-production woes or some other simple issue with Apple’s latest iOS. 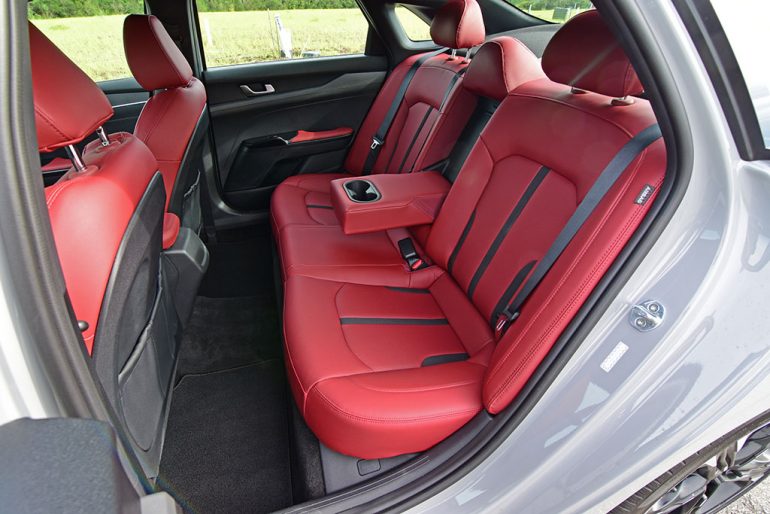 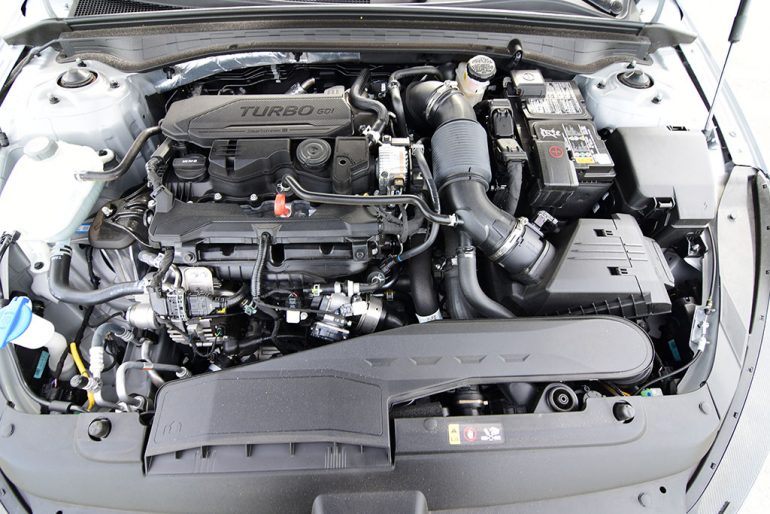 The new 2021 Kia K5 starts at just $23,490 for the base LX trim. My Kia K5 GT-Line trim comes to an as-tested price of $28,400, which is still a good value that undercuts its competition for such a freshly-designed sporty-looking midsized sedan.