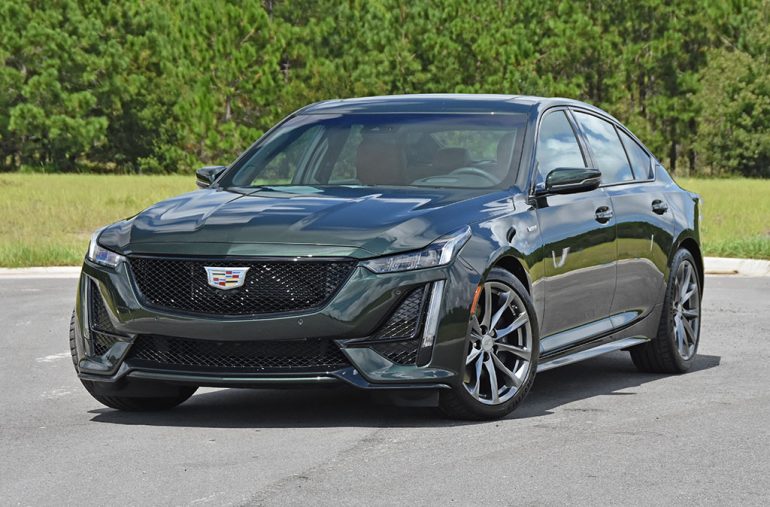 I remember it like yesterday, my last brush with the outgoing Cadillac CTS-V – it was a thrashing Supercharged V8 monster poised to take on the likings of the BMW M5 and Mercedes-AMG E63 sedan. Holding onto such a memory is much in part thanks the old CTS-V’s 640-horsepower, which now, isn’t currently available in the CTS’ replacement, the new CT5.

This week I had the chance to check out what Cadillac has done with its CT5 midsized sedan on a more performance-oriented measure. For starters, it’s no longer known as the CTS, it is now the CT5. Also, the V-Series of the CT5 doesn’t necessarily fit the mold of what we knew the CTS-V to be, or the ATS-V for that matter. Instead, it is more of a V-Sport variation that we get to tide us over until Cadillac gives us a full-on performance variant, potentially utilizing a new V8 engine for power figures well north of 500. 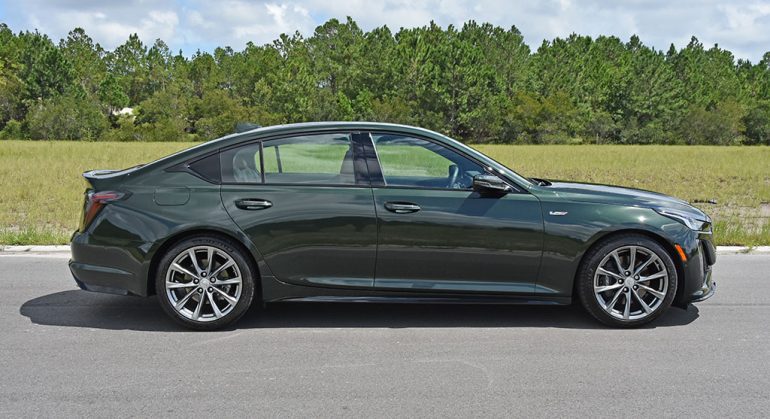 The new 2020 Cadillac CTS-V, not to dwell on it lacking the performance chops of the last-generation CTS-V, holds its own pretty well for filling the place that the CTS V-Sport held, which is more along the lines of an M-Sport-equipped BMW 540i or a Mercedes-AMG E53. At such a level, each of these sedans represents an elevated level of performance over the base trim. Cadillac does well to offer up such in the new CT5-V, which is adorned with unique looks from its one-off darkened trim, front grill, and specialized LED taillights. From a quick glance, the CT5-V is a good-looking vehicle, one that gets proper attention from its sporty and somewhat menacing looks. From there, things get a bit interesting, in some good and bad ways. 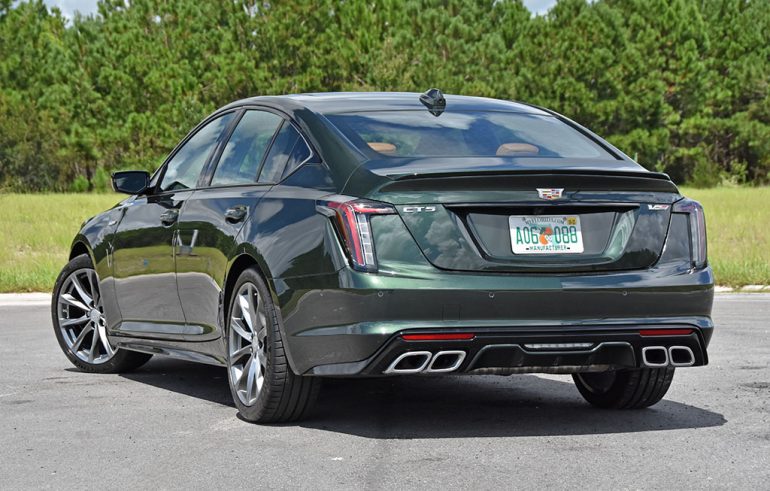 Cadillac is known for performance in their V-Series vehicles, and the CT5-V doesn’t disappoint – that is if you don’t have exceptionally high expectations. You must realize that at the heart of the CT5-V, you will find a similar powertrain from is mid-level Luxury and upper Sport trim of the normal CT5, which is a twin-turbo V6 that pumps out 360 horsepower and 405 lb-ft of torque mated to a 10-speed automatic transmission. Power sent out to the rear wheels comes on surprisingly strong, and the force-fed V6 does well for a nice linear power band that holds all the way up to near redline. The CT5-V feels capable with a nicely balanced chassis, one that’s aided by remarkable MagneRide adaptive dampers, which appears Cadillac has nearly perfected in their ability to make micro-second adjustments for an always-smooth but compliant ride quality. In fact, the MagneRide, or magnetorheological dampers, are some of the secret sauce of the CT5-V’s ability to handle the road so well without a harsh ride quality, even in its Sport/Track drive modes. In such drive modes, which can be dialed up with unique vehicle perimeters in a customizable MyMode drive mode, enlightens many things such as the braking effort, exhaust sound, and the steering effort that becomes exceptionally heavy in the Track setting but doesn’t add any additional feedback from the road. The exhaust sound setting, a total of five of them, are very subtle in changes and, for the most part, is on the louder side of things even in the “Stealth” quiet mode – there’s an abundance of induction noise that sounds almost artificial (it probably is). 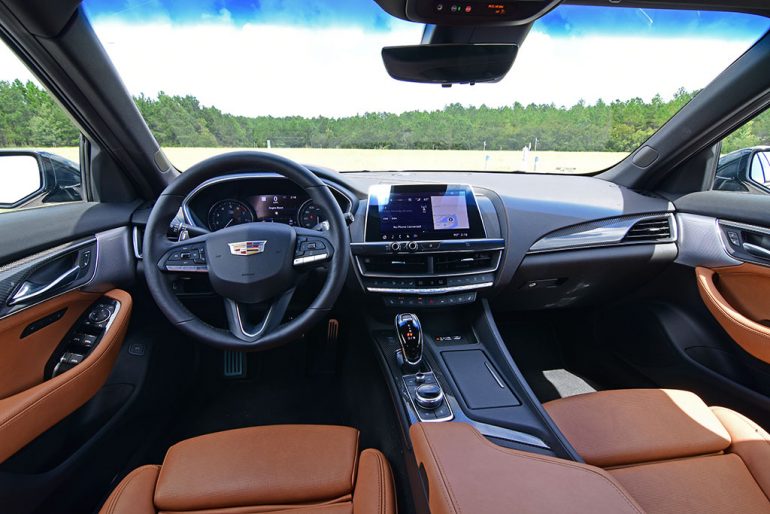 Being that the twin-turbo V6 engine is not all that different from the available option for any CT5, the CT5-V only gets an additional 25 horsepower while the torque figure of 405 lb-ft remains the same. The additional 25 ponies and unique chassis tuning in the CT5-V do make it more of an enjoyable experience for enthusiasts and allows for a zero to 60 mph time of 4.6 seconds. The better braking system, a 4-piston caliper Brembo setup up front and 2-piston calipers out back, do well to curb the speed of the CT5-V. For the stated specs of the 2020 CT5-V, Cadillac left a lot on the table to introduce a real-V CT5 potentially using a meaty V8 engine. The last benefit of the twin-turbo V6 is its fuel efficiency over any V8, which comes to 18 mpg city and 26 mpg highway, numbers that fall a little short for a midsized sedan. 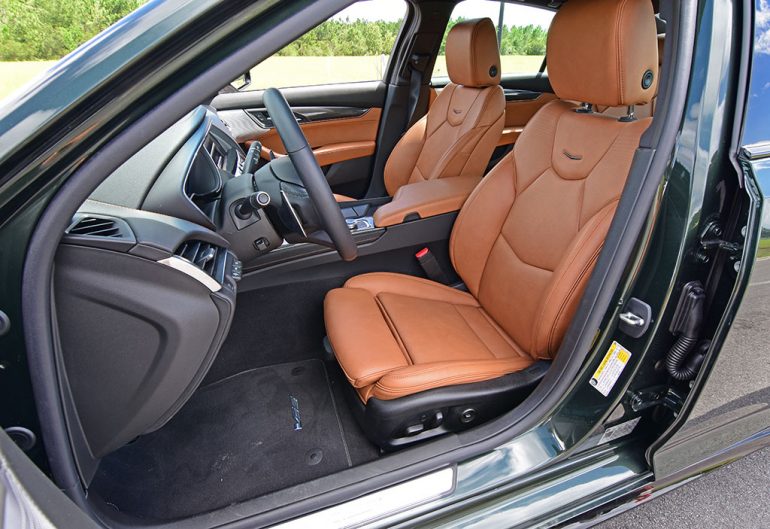 On the side of luxury, the new CT5-V does well visually on the exterior, but things start to lose focus on the inside when you pit it against its direct competition. There’s nothing blaring bad about the CT5-V’s interior as it gives you plenty of soft-touch surfaces and a nice contrasting color palette throughout with the proper trim. The perforated leather seats are comfy enough with heating and ventilation up front. The color heads-up display is about the right size, and there’s a plethora of active safety features throughout as expected, including adaptive cruise control and a clever 360-degree camera system that ensures that you can inch-up on curbs without damaging the 19-inch alloy wheels or low front splitter. The latest Cadillac User Experience (CUE) infotainment system is welcomed with its redundancy of controls where you can either use the 8-inch touchscreen or control it via a physical turn-knob and a set of dedicated function buttons surrounding the knob. The one trick that GM has rolled out for its luxury vehicles is the latest HD Rear Vision Camera, which is a live camera feed of your rear view fed onto the rearview mirror at a toggle of the lower flip switch. As covered in many of my recent reviews of GM vehicles, the HD Rear Vision Camera takes a while to get used to as it requires your eyes to make a depth of field adjustment as the rearview mirror is transformed into an LCD screen instead of acting as a mirror with true depth to nearly match what your eyes are already focused on in your forward view. 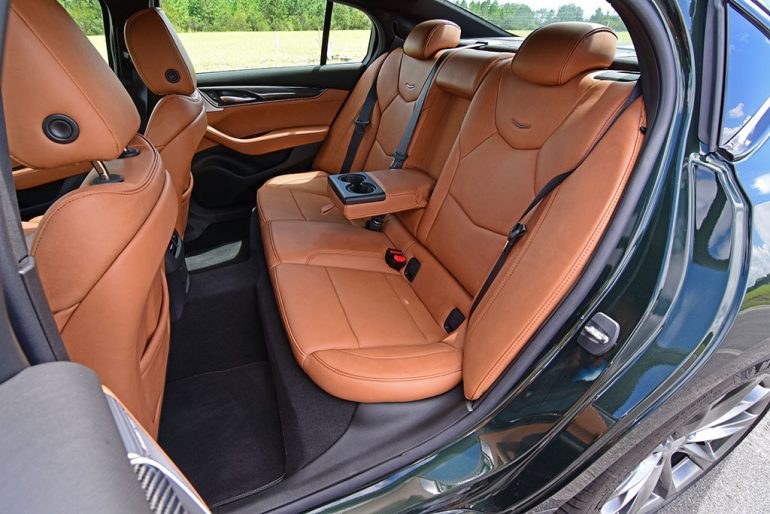 The 2020 Cadillac CT5-V is an excellent vehicle with all the right appointments and respected performance well above what you expect in an entry-level luxury sedan. However, for the price of admission of the nicely-loaded CT5-V as-tested at $63,045, the proposition of selecting such a vehicle over many crossover utility offerings may be a hard pill for some. Though, those who are still stuck on midsized sedans will adore the CT5-V, at least before the real CT5 V with a V8 arrives. 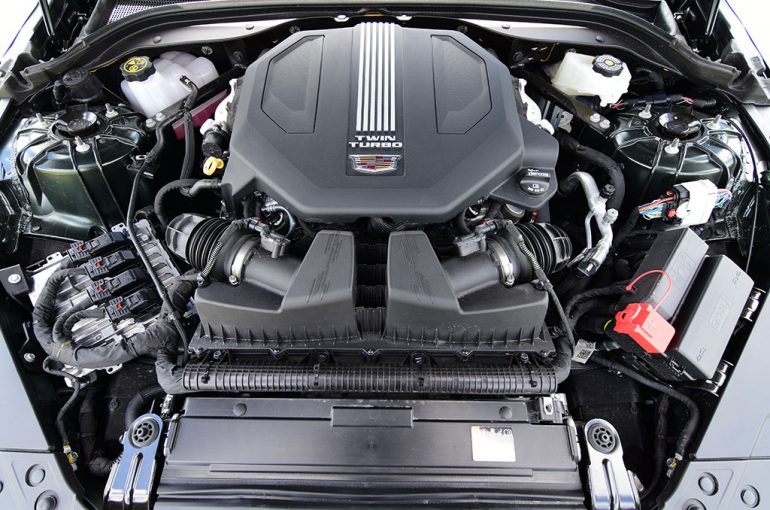