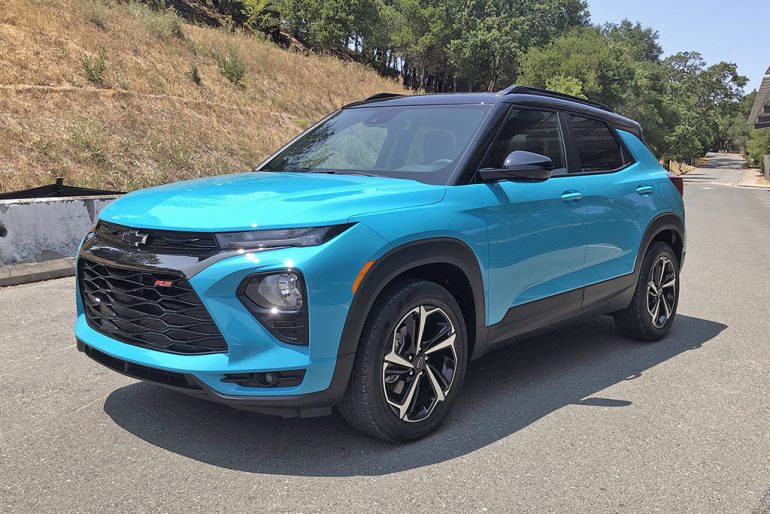 Not sure if you’ve heard the news, but the new-for-’21 Trailblazer has been an absolute hit so far, flying off car lots faster than any other new vehicle. How fast? Selling within a mere 19 days at Chevy dealerships over the Spring and Summer since it was introduced, the mighty little SUV beats a 97-day industry average by a long shot. And after driving one for a week, I can see why; It’s a big bang for the buck, and what it lacks in luxury, it makes up for in fun and useability.

Let’s start with the specs for our top-level RS trim model, which started at $26,900. It features an EcoTec 1.3 liter turbo motor making 155 horsepower, backed by a 9-speed automatic transmission and all-wheel drive. No, the drivetrain won’t win any drag races, but it was surprisingly peppy, with the turbo’s power coming on low in the rpm range. The Trailblazer is tuned for maximum fuel efficiency while delivering a very enjoyable powerband that tries to hide its low hp numbers. The EPA rated our RS at a very thrifty 26 city and 30 highway, with a combined 28 mpg, and it wasn’t hard to best those numbers when driving with a little restraint. 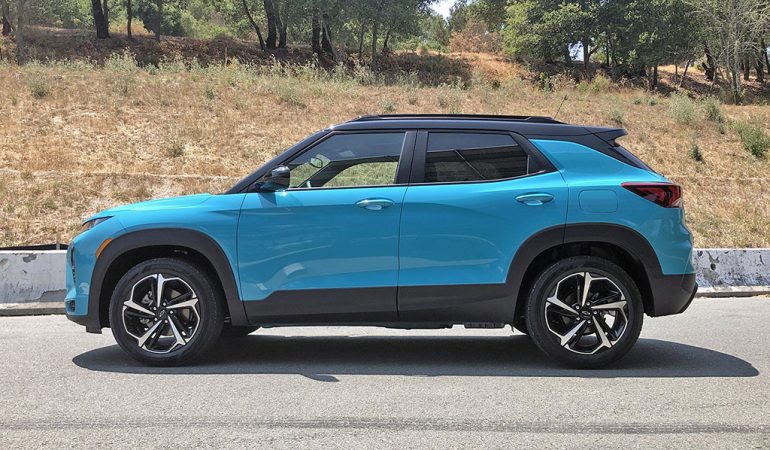 Driving around town, the ride is smooth and compliant thanks to the fairly soft suspension. However, under harder cornering, you’ll find it begins to roll a bit, and on rough roads, the chassis tuning shows its limits to absorb bigger bumps. That being said, the Trailblazer is the smallest SUV in Chevy’s range outside of the Trax, so I wasn’t expecting it to ride as cushy as a long-wheelbase Suburban. 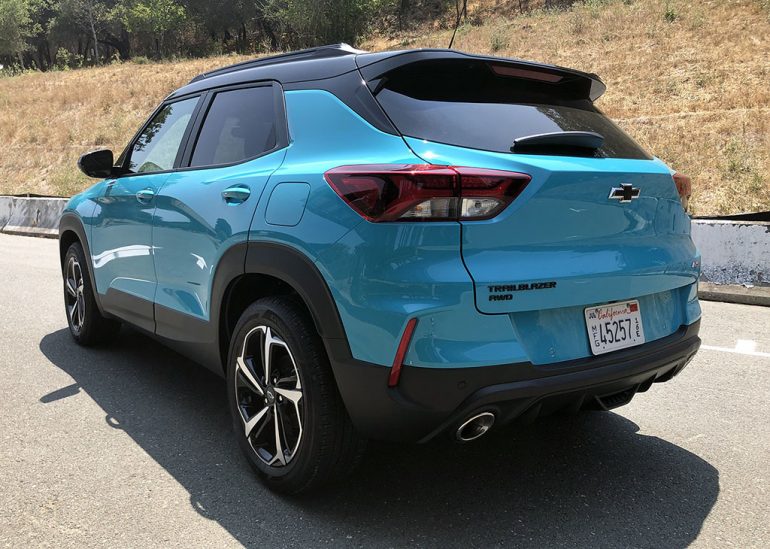 The bright Oasis Blue paint was the perfect choice for our vehicle, and kudos to Chevrolet for offering such a cheerful hue that’s only available on the Sonic, Bolt, and Trailblazer. It’s a good-looking vehicle in this particular color, there were unexpected thumbs up and second glances from other motorists. Our RS came standard unique 18” black wheels and a Mosaic Black roof that really offset the bright blue body color quite well. It was also heavily-optioned, included the Technology Package ($1720) that gives nice digital features like wireless phone charging, Apple CarPlay/ Android Auto via a larger center display, and Adaptive Cruise Control. Our vehicle also had the oddly-coupled ‘Sun and Liftgate’ package ($1770) with the panoramic sunroof and power liftgate, and lest you forget this is an entry-level priced SUV, you’ve got to tick the Convenience Package ($620) that bundles the basics like Air Conditioning, rear charging ports and illuminated vanity mirrors. 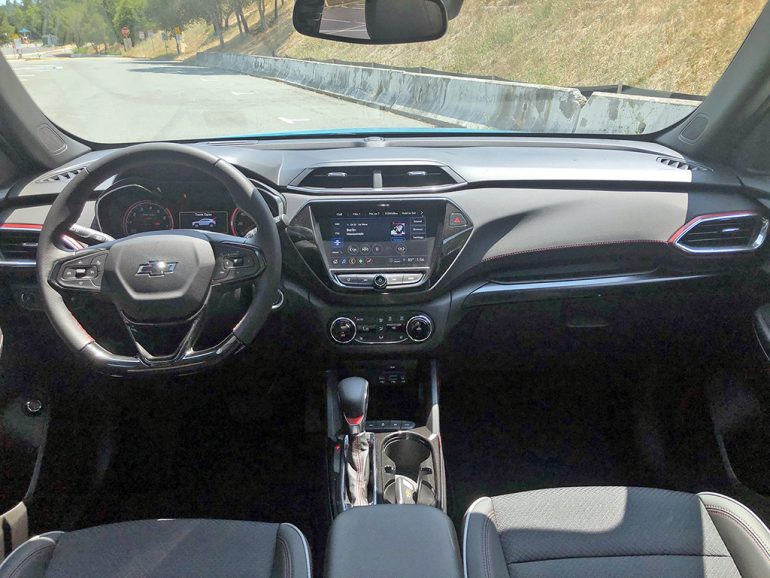 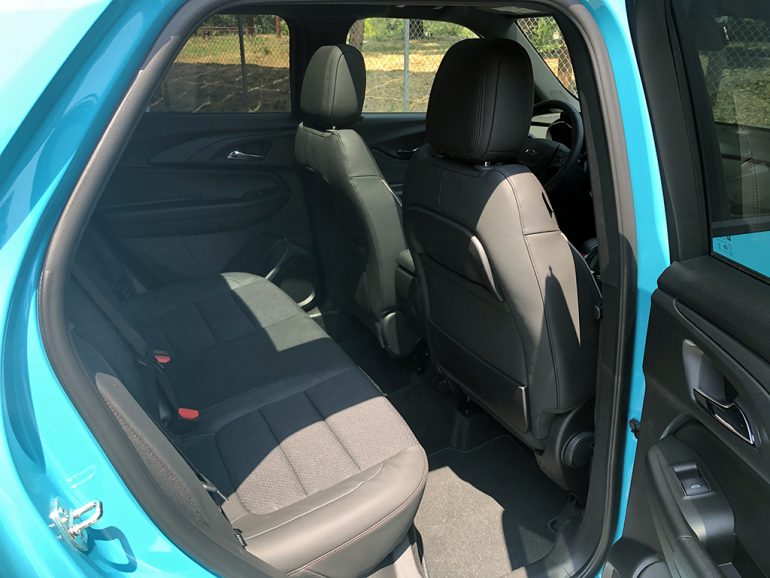 The interior’s design isn’t quite as stylish as the exterior, featuring a number of hard plastic surfaces, but the RS trim it felt a bit more upscale and very livable. The Trailblazer also offered plenty of room for 4 full-sized adults along with their gear in the back, and with a fold-down front passenger seat, hauling a surfboard inside was not out of the question. Overall, the Trailblazer is a solid proposition for the money, and there’s a good reason they are selling so well. 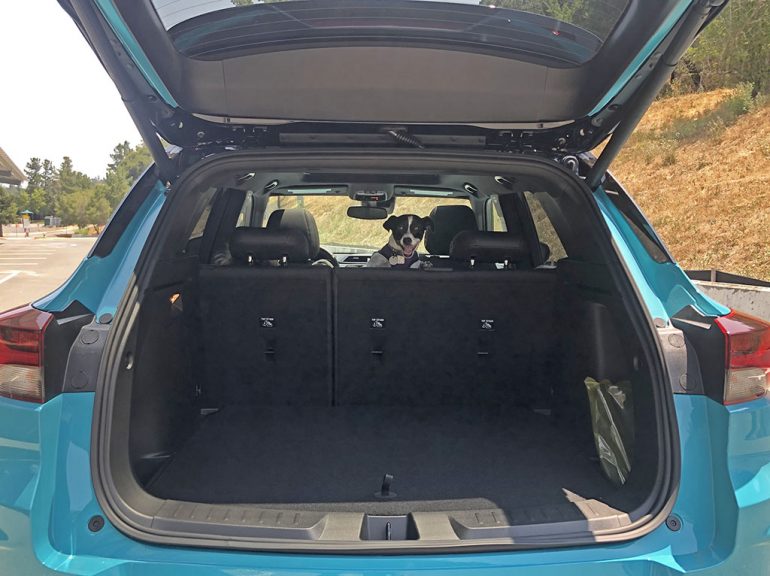