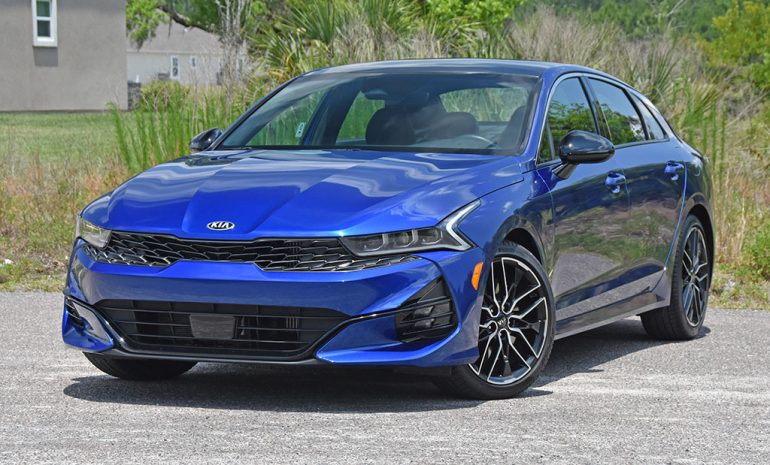 It’s possible that the sedan segment still has a bit of life left in it as we start to see a newfound interest in affordable offerings like the new Kia K5, which I had the chance to check out for a week in its performance-oriented GT trim level.

As we see the interest in SUVs/Crossovers remain strong, there’s still a love of mainstream sedans as the sales figures for vehicles like the new Kia K5 continue to impress. I can give my educated guess as to the slight shift being that the new Kia K5 is quite a remarkable vehicle that fundamentally elevates where the Kia Optima left off in being its replacement.

I had a chance to experience the new 2021 Kia K5 last year in the mid-level GT-Line trim level, which featured the standard powertrain, a 1.6-liter turbocharged 4-cylinder engine with 180 horsepower and 195 lb-ft of torque. While the K5 in the lower trims was impressive for the price, the new K5 GT brings forth an interesting performance injection by the way of its 2.5-liter turbocharged 4-cylinder engine that pumps out 290 horsepower and 311 lb-ft of torque. That power is sent through an 8-speed automated dual-clutch transmission (DCT) that is the best offering from the brand yet. The engine and transmission send power through the front wheels and is apt to roasting the front tires if you lay into the throttle from a stop. Moreover, the front wheels often break loose upon full throttle even if you’re muddling along at about 25 mph. That ample torque from the turbocharged engine comes on strong just after you go through a split-second of turbo lag from idle. 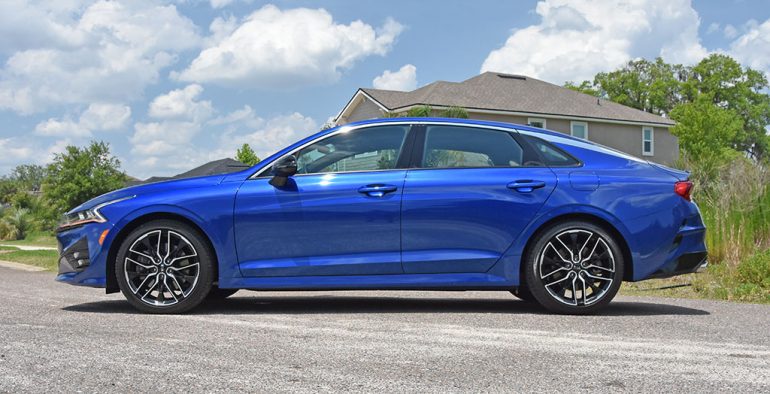 The driving character of the Kia K5 GT isn’t as nervous as you would expect out of a front-wheel-drive sedan with north of 300 lb-ft of torque. The front wheels seem to spin and alternate their street-painting duties because there’s no limited-slip differential, which would probably help the K5 GT since it’s producing such a healthy amount of power just for those 19-inch wheels and tires up front. Having the open differential leaves a little guessing game as to how the front end of the K5 GT will pull you down the road. Though, zero to 60 mph takes place in about 5.5 seconds, provided that you do a little throttle modulation. There’s even a launch control option that basically slips the automated wet clutch a little longer than normal acceleration but still will produce front wheel spin. 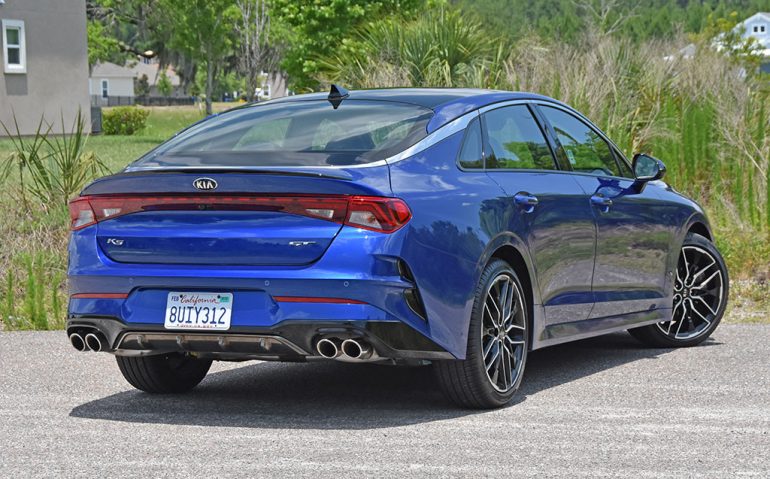 Overall, the Kia K5 GT rides well with a slightly stiffer than necessary suspension system. Some may not like the slightly stiff ride quality of the K5 GT over the other trim levels. I will say the sport suspension and fixed damper setup adds to the handling abilities of the K5 GT, which feel leaps above the K5 GT-Line trim that I drove last year. 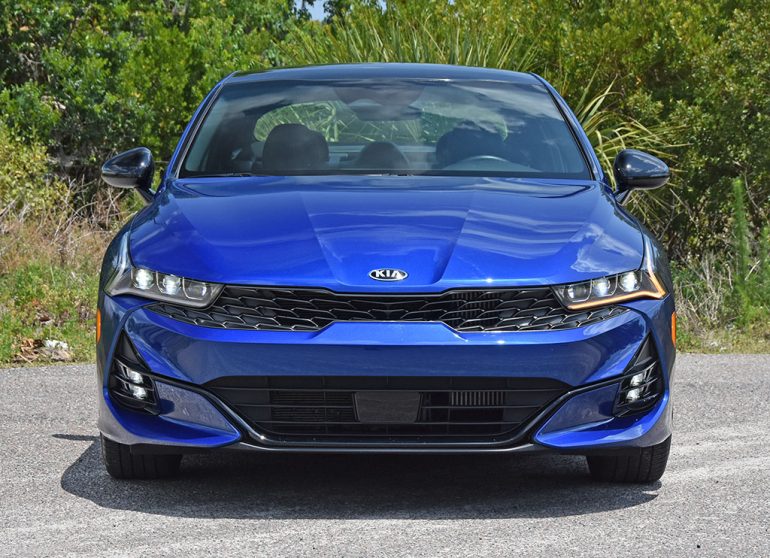 The extra power is fun and adds to assure the driver of being able to overtake other vehicles on the highway and have a little bit of fun – as much fun as a front-wheel-drive midsized sedan will allow that has a bit of extra substance under the hood. The number of features coincides with the decent performance of the K5 GT. Even the 8-speed DCT transmission is among the best I’ve experienced for a mainstream vehicle in that it doesn’t have the clunky and indecisive feeling that I’ve experienced in DCT units of the past in the Hyundai and Kia brands. 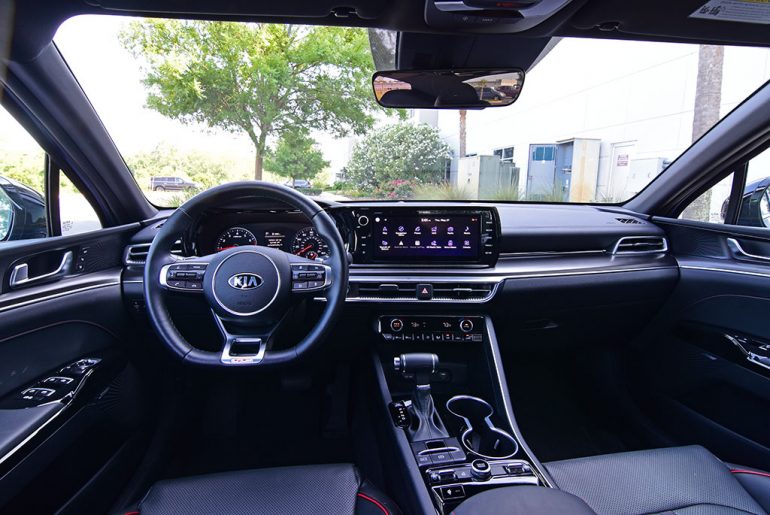 I observed a mostly consistent consumption of fuel averaging about 28.7 mpg during my week with the K5 GT where I had slightly more highway driving than city. EPA estimates come in at 24 mpg city, 32 mpg highway, and 27 mpg combined. 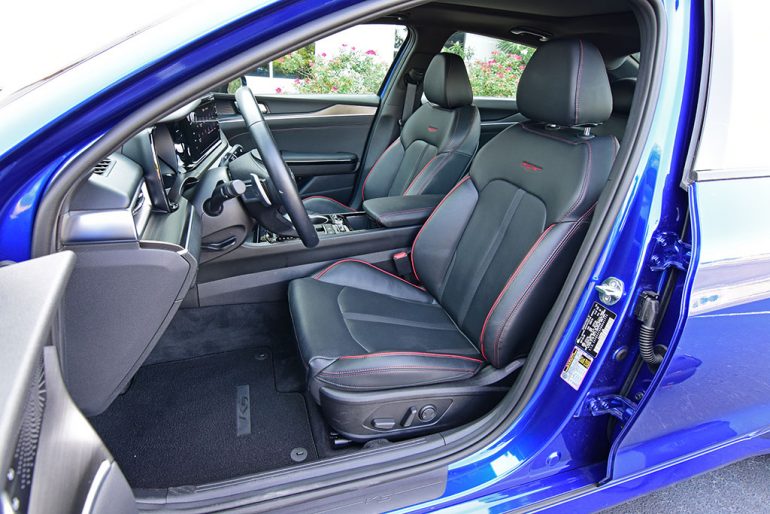 As far as comfort and feature sets, the Kia K5 GT prides itself with a plentiful amount of highly desirable amenities making the K5 GT the proper premium sedan with much more power than most sedans in its class to boot. There’s also quite comfortable sports seats up front with heating, ventilation, and power lumbar adjustments. The interior layout is also refreshing with the proper amount of physical controls for the dual-zone automatic climate system and a straightforward infotainment unit fed through the optional 10.25-inch touchscreen. While an 8-inch touchscreen is standard for the K5 in all trim levels, the addition of the 10.25-inch unit is welcomed for a more cohesive touch for the interior and a better representation of the vast number of menus and wireless Apple CarPlay and Android Auto integration. 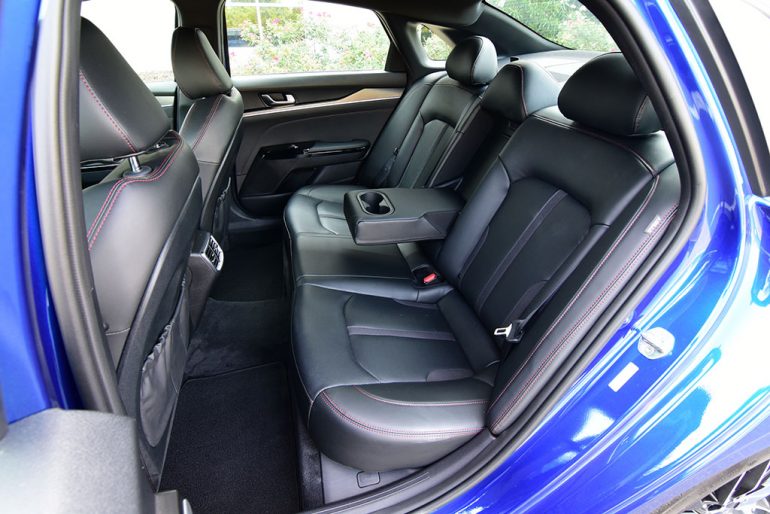 The stylish looks of the K5 GT from its unique slider grille design encasing LED projector headlights and the hatchback form of the rear with a proper opening hatch giving way to an accommodating cargo area. The quad-exhaust tips also do the job to complete the K5 GT’s performance-oriented character, so it won’t be confused with other K5 trims, which are down 110 horsepower from the GT trim. 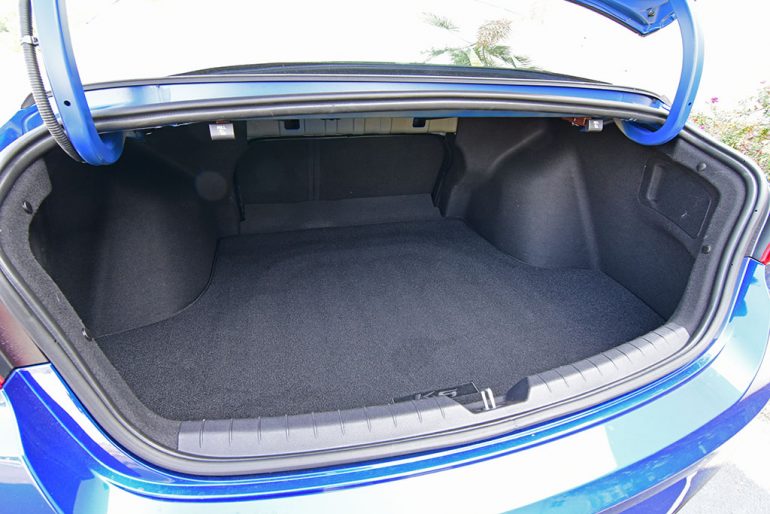 There’s also a new level of advanced safety tech that comes standard with the expected features of blind-spot monitors/blind-spot collision avoidance, rear cross-traffic collision avoidance, forward collision avoidance with pedestrian assist, and lane-keep assist with lane following assist. As optional equipment, you can get a highway driving assist system that I found to be more friendly with it autonomously following clearly painted lines on the highway utilizing adaptive cruise control and a steering assist. 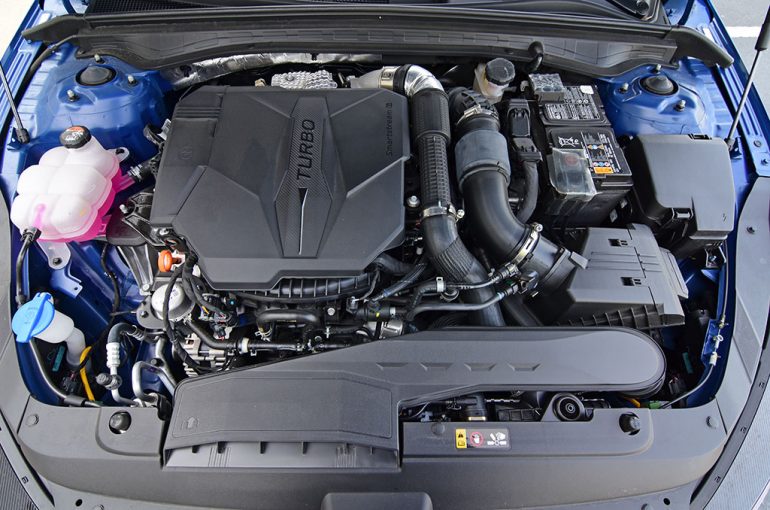 While I would never confuse the new Kia K5 GT with a real sports car, it does the proper job for light-hearted enthusiasts who want something much more in the performance realm over most mainstream front-wheel-drive sedans in a proper “sports sedan.” Not to mention, the Kia K5 GT is a bargain for the amount of premium equipment, premium accommodations, and powerful engine at the as-tested price of $35,705.