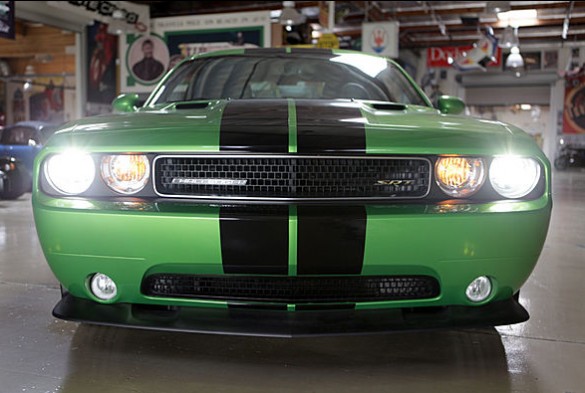 When it comes to domestic cars, I’ve always been more of a Ford guy than anything else. I’ve never owned a Chevy, I’ve owned but one Plymouth (made by Mitsubishi), but I’ve owned four Fords. Despite this, I’ll admit to loving the lines of the Dodge Challenger, which is (in my mind, at least) the best looking of all the retro muscle cars. Like the Mustang, it tries to stay true to the early design, without adding the “contemporary styling flair” of the new Camaro. Unfortunately, like the Camaro, it’s just too damn big to be much fun on a racetrack. Or is it? A recent conversation with Dodge’s Ralph Gilles has me re-thinking that, and like Jay Leno I can’t wait to get behind the wheel of one. Take a look at the video below (which also features Gilles) and tell me you don’t want to go lay some rubber.

During a recent lunch presentation, Gilles said that the new Challenger “drives 1,000 pounds lighter” than the car actually is. I loved that comparison, because I instantly knew what he was talking about. The 2011 Mustang, for example, feels lighter than its curb weight of 3,605 pounds. The 2011 Camaro 2SS, on the other hand, feels a lot heavier than its 3,860 pounds. Could the suspension changes made to the Challenger have produced a car that’s livable for the occasional track day? I won’t know for sure until I drive one, but I suspect the answer is yes. I think the hot setup for track use will be the 5.7 liter Hemi version with the Super Track Pak suspension, even if it is down on horsepower from the 6.4 liter Hemi (called the 392). The smaller engine is about 100 pounds lighter, which should help with the cars balance. As soon as I get to test my theory, I’ll let you know.