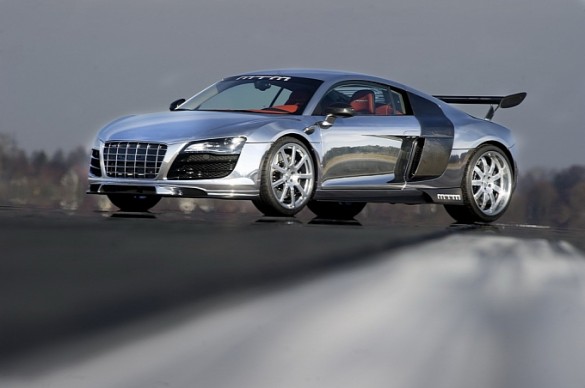 Don’t even think about buying this one-off, uber-tuned R8 from MTM unless you own some serious sunglasses. In fact, welders goggles wouldn’t be out of the question, especially on sunny days. The exterior, you see, was stripped of paint before the bare aluminum was polished to a mirror-like sheen, a process that took some 700 hours to complete. Put that into perspective for a second: if you were working at home in your garage, killing two hours of spare time per day, that finish would take you nearly a year to duplicate (at which time you’d probably have to start all over again to remove the oxidation). As cool as it is, that’s not what the MTM R8 Biturbo is really about. 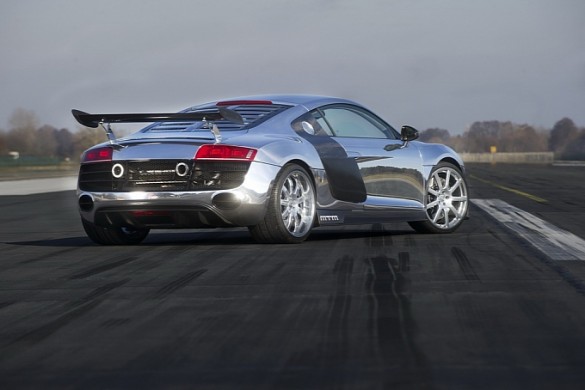 The real mission of the MTM R8 Biturbo is speed, and the car’s 777 horsepower twin-turbo V10 should provide plenty of mission support. The engine cranks out 655 ft lb of torque as well, enough to launch the car from zero to sixty in under three seconds. Top speed is said to be 217 miles per hour, and MTM put serious effort into the brakes and suspension to keep the car safe at those speeds. Each corner gets a fifteen inch rotor, backed up by an eight piston caliper, and the whole car rides on a custom coilover suspension. Forged 20” rims, polished to match the rest of the car, complete the build.

The car really isn’t for sale, as it was designed to showcase the work MTM is capable of. That said, everything has its price, and the MTM R8 Biturbo is no exception. The tuner figures it cost them around $554,000 to build, so if you want to park this in your garage you’d best plan on a starting bid well north of there.