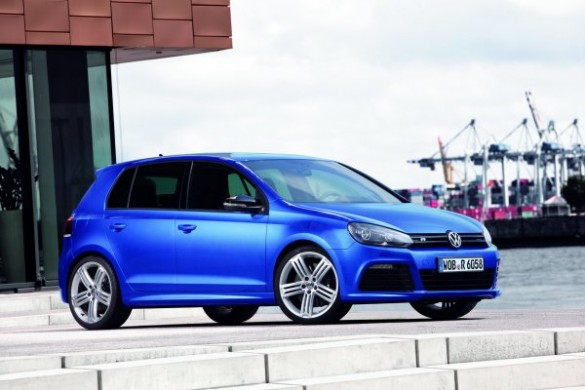 Have your heart set on a 2012 VW Golf R? Don’t worry, the car’s still coming to this side of the pond, and there’s a good chance you’ll be able to take one home in time for Christmas. That’s the good news, but as you may have guessed, there’s bad news as well. In EU trim, the 2012 VW Golf R will be good for 270 horsepower and 258 ft lb of torque, but in U.S. trim, the car is reduced to 256 horsepower and 243 ft lb of torque. If you’d hoped for VW’s outstanding DSG dual-clutch gearbox, I’ve got more bad news for you: VW is only bringing in manual transmission versions of the Golf R.

The 2012 Golf R will be powered by a 2.0 liter turbocharged four cylinder, and as with previous Golf R models the power gets sent to all four wheels. To keep things simple for the U.S. market (thus reducing VW’s expenses), buyers won’t have a lot of versions or options to choose from. The car will come in both two and four door models, and a premium package will give buyers a sunroof, premium audio and nav systems. Autoblog, who broke this story as part of their Geneva Auto Show coverage, tells us that pricing is expected to start at $33,000, which is comparable to where the last generation Golf R model began.

I’ve always been a fan of the Golf R, and nearly bought the first U.S. version with the VR6 motor in 2004. Even though the pricing for 2012 models isn’t expected to be substantially higher than the 2008 models, that’s still pretty lofty territory. If you want luxury and performance, a few dollars more buys you an Infiniti G37 Coupe (or sedan). If it’s just speed you’re after, that money buys a well equipped Ford Mustang GT, complete with the 412 horsepower Coyote V8. If it’s AWD and performance you want, the Subaru Impreza WRX gives you comparable horsepower for about six grand less than the VW Golf R, and the WRX STI gives you more horsepower and (potentially) better handling at the same price. Both cars also lack the VW’s superb interior, something that helps differentiate the Golf R from other cars in the market. Is it worth the money? I’ll let you know as soon as I have a chance to drive one.