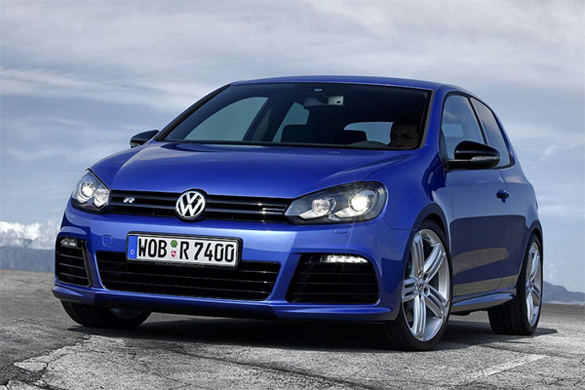 Instead of “sexual chocolate” in the movie “Coming to America” this is more like “the newest Volkswagen pocket rocket” that will be coming to America in the form of a R20 instead of the infamous R32.

Volkswagen just revealed their new R version of the MK VI Golf (6th generation Golf) at the Frankfurt Motor Show last month. Just recently we received a confirmation that the new Golf “R” version aka GTI-R or R20, will be headed to the United States branded as “GTI-R”.

The 2010 Golf GTI-R will have the same engine as the Scirocco R, which we will not see in the U.S. It will incorporate VW’s 4Motion all-wheel drive system matched to a 265hp 2.0-liter TSI engine. Of course the DSG tranny will be an option which is good for a pocket-rocket dash from 0 to 60mph in 5.5 seconds. Top speed is limited electronically at 155mph.

Too bad the R32 boy-racer fans, no pun intended, may be disappointed to see the 15-degreen 6-cylindar not returning but replaced by a turbo 4-banger. But guys, this allows you to do more tuning! Smile!

Source Update 10/23/09: To our readers from Malcolm -Owner AutomotiveAddicts.com.

I would like to state that our editor’s source for this post is not credible in my view to make the determination that the VW Golf R20/GTI-R is coming America. I will be performing additional research on this and update you at a later date. Thank you for your feedback!