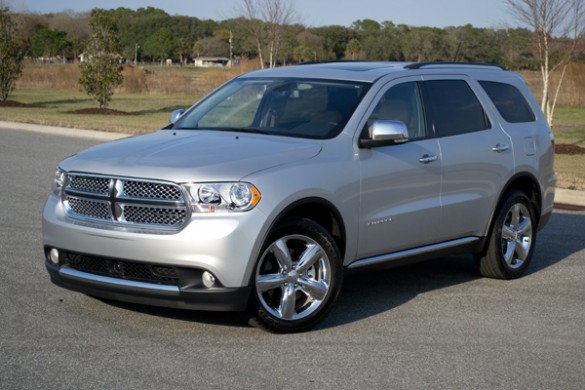 The all-new Dodge Durango is one of many redesigned vehicles to help redefine Chrysler and the Dodge brand. If the new creative commercials such as the Eminem “Imported From Detroit” Superbowl ad were not enough to convince you of a positive change from Chrysler, then the new 2011 Dodge Durango Citadel may do the job after you give it a test drive.

After spending a week in the 2011 Dodge Durango, totally redesigned from the ground up for 2011, it is apparent that Dodge has managed to stay in the race with other competitors. My Dodge Durango test vehicle was the Citadel RWD trim version, which is essentially a top-level package incorporating the base Express trim level and Crew midlevel trim packages. 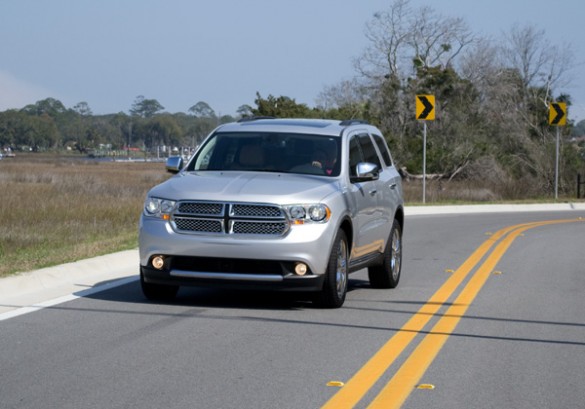 As you can imagine, our Citadel optioned-out Durango included many amenities such as Xenon self-leveling headlights, heated/cooled perforated leather front seats, adaptive cruise control with forward collision warning, rear back-up camera, power tilt and heated steering wheel, rain sensing wipers, hill start assist, power rear lift gate, 20-inch aluminum chrome clad wheels, and blind-spot detection with rear cross-path detection. Dodge pulled out all of the tricks when it comes to optioning its Citadel version of the Durango. The only thing missing from our test vehicle was the optional HEMI V8 in place of the new standard Pentastar 3.6-liter V6 engine. Don’t worry, if you want that HEMI, you can have it in the new R/T version of the Durango packing in a 5.7-liter V8 with 360 horsepower and 390 foot-pounds of torque. 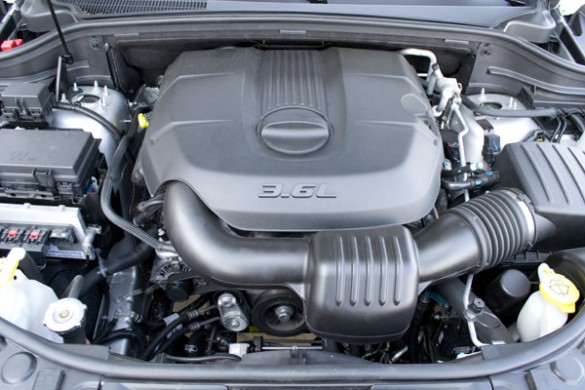 Our Durango Citadel had the standard Pentastar V6 engine, which is an all-new powertrain from the Chrysler Co. that touts class-leading fuel efficiency levels while producing a decent 290 horsepower at 6400 rpm and 260 foot-pounds of peak torque at 4800 rpm. On paper this is a good amount of power, 80hp more than the previous years 3.7-liter V6 equipped Durangos, especially with fuel economy ratings at 16mpg city and 23mpg highway. For any large SUV (most with big thirsty V8 engines) those figures are almost unheard of. The only downside is the 2011 Durango Citadel could use a bit more oomph considering you are pushing around 4905 pounds on top of potentially 3 rows of passengers plus luggage. 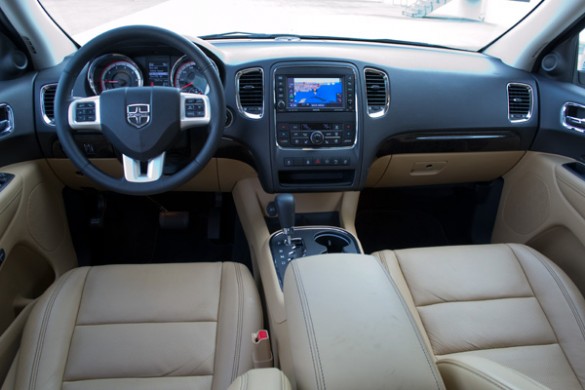 You will notice on the outside of the new 2011 Dodge Durango holds a totally revamped styling that looks stunning while not too overbearing. The new Durango is possibly one of the better-looking large 3-row-seating SUVs on the road for less than 50 grand. Everywhere I went people were staring down at the large Dodge-esq grill and I even noticed some on-lookers taking photos of the Durango possibly attempting to figure out exactly what it was. Clearly the name ‘Durango’ was not observed much due to fact that the ‘Citadel’ badging was more abundant on the front doors and rear lift gate than the single rear ‘Durango’ badge. 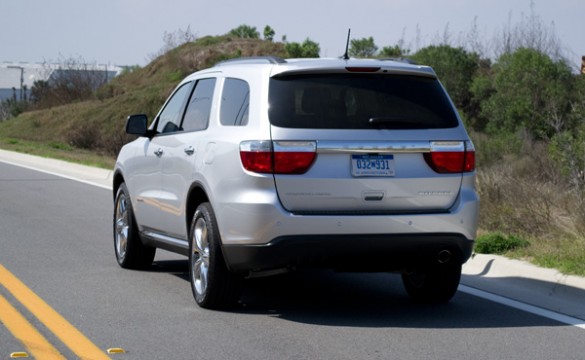 Inside the all-new 2011 Durango is ample room to spread out and find a comfortable seating position for any one of the 7 passengers. Upfront, being over 6-feet tall, I had no issues giving myself extra legroom with the highly adjustable 8-way power driver’s seat. The front passenger seat is an identical situation minus the steering wheel. Going back to the 2nd row seat passengers will enjoy their own ac/heat controls with vents located on the roof and behind the front-row armrest console. 2nd and 3rd row seating positions have adjustments to satisfy all kids and most adults. Entry and exit of the 3rd row comes with ease via flipping the 2nd row seat, which will need the assistance of an adult to maneuver the spring-assisted seat. 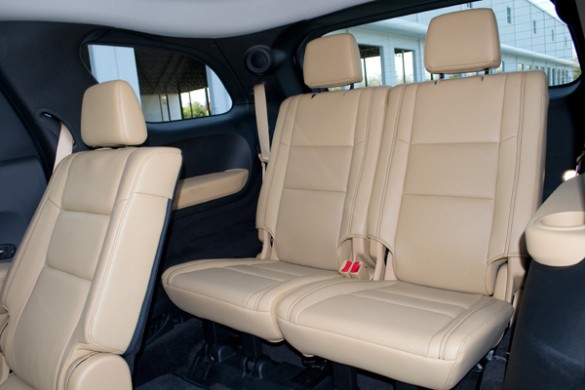 One thing setting the all-new 2011 Durango apart from the competition is the way it drives and the ease of drivability. The new Durango drives like a normal sedan instead of the large SUV that it is. I won’t completely mislead you by saying the Durango always behaves like a sedan rather than an SUV, but I will say that for most “normal’ driving situations you will enjoy how easy it is to drive such a big vehicle. Most of this is due to its all-new unibody construction, no longer body-on-frame architecture, shared with the new Jeep Grand Cherokee and derived from the Mercedes Benz M Class. 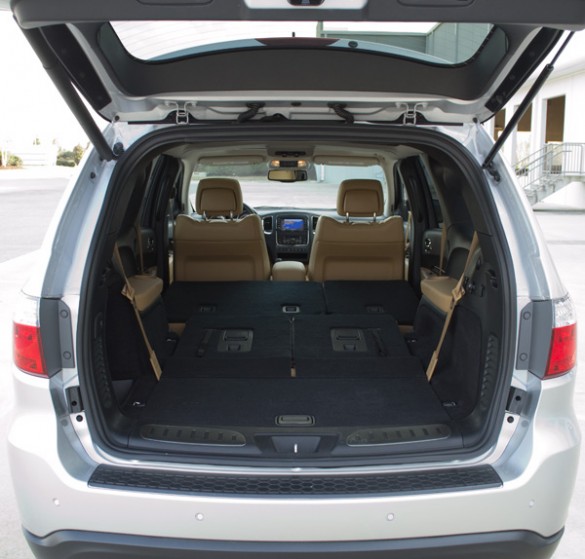 The electric power steering also contributes to the car-like driving dynamics as it is well balanced and among the best I have experienced. The lower riding front end provides a nice stable feel at highway speeds while keeping the center of gravity low enough for spirited driving around town without getting too much body roll. Off-roading of my rear-wheel-drive test vehicle may have turned into a task if I took it to the same place as my 4Runner or Jeep Wrangler test vehicles from the past. It would be wise to opt for the all-wheel-drive version of the Durango if you may consider off road terrains. Over-all, the Durango Citadel RWD rides great on most paved road surfaces, which is due to the excellent dampening and suspension engineering. 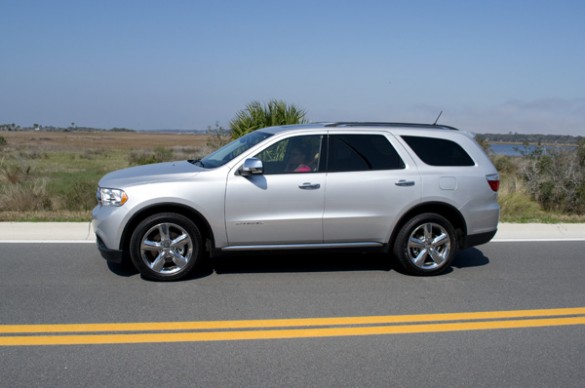 In the American SUV culture it is about size and brute. With gas prices steadily rising lately, Americans will sacrifice a bit of the brute but still want the size and that is where the all-new 2011 Dodge Durango Citadel will fill the void along side of newly redesigned SUVs such as the all-new 2011 Ford Explorer. On the highway our test vehicle got a decent and consistent 22-mpg which will place the Durango Citadel on the buyers list for many large SUV shoppers conscious of $4 a-gallon gas prices creeping up on us.