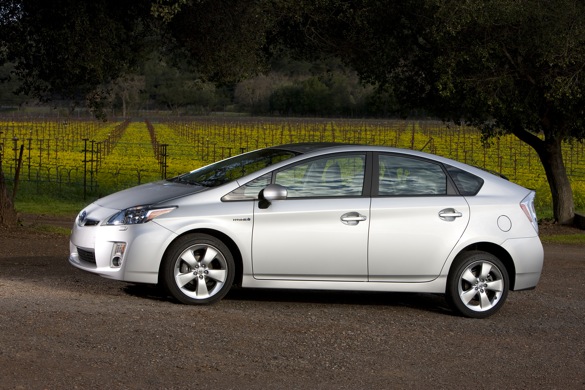 Toyota's Prius is the only hybrid whose demand exceeds supply. Image: Toyota

By 2016, automakers who sell their wares in the United States have to achieve a CAFE average of 35.5 miles per gallon. To put that number in perspective, the average fuel economy of a vehicle sold in 2010 was 22.2 miles per gallon; in other words, in the next five years, fuel economy has to increase by an average of nearly 61% per vehicle sold. That’s not even remotely possible, especially when you consider that the average fuel economy per vehicle sold declined from 2009 to 2010. One reason is that sales of trucks, minivans and SUVs rose by 3% last year; in other words, Americans like big vehicles, and as long as gas prices don’t stay at current levels, we’ll continue to buy trucks. That’s bad news for automakers, who face stiff financial penalties if they can’t achieve the ridiculously optimistic CAFE goals. So what happens next?

First, it’s unlikely that Americans will change their vehicle buying habits unless they’re convinced high fuel prices are here to stay. Even then, downsizing is likely to mean buying a smaller truck or SUV, not jumping all the way down to a fuel efficient compact hybrid. In fact, hybrid market share shrank from 2.9% of vehicles sold in 2009 to 2.4% of vehicles sold in 2010. The only hybrids I know that are selling well are the Toyota Prius (bought by the minority of Americans who are truly concerned about global warming, fuel prices and the environment) and the Lincoln MKZ hybrid, which costs the exact same amount as its non-hybrid sibling. Despite the best attempt by automaker to change our buying habits, this much should be obvious: Americans don’t like hybrids, because they’re still too “different” than the cars we’re used to.

So what options do automakers really have? One, as far as I can tell: petition the government to relax the implementation of CAFE standards, at least until the technology catches up with the legislation. The only alternative I can see is slapping huge surcharges on trucks, to encourage buyers to downsize to more sensible transportation. I can’t think of a politician stupid enough to promote that agenda, which would cetainly be political suicide.