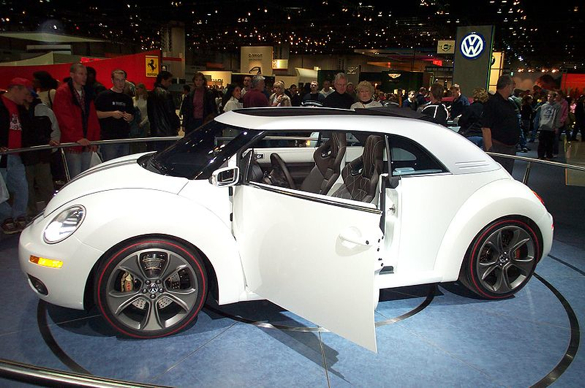 VW's Ragster Concept, close to what the new Beetle will look like. Image: IG-2000

Launching a new model used to be simple: if you wanted to sell it in Europe first, you launched it at the Geneva Auto Show, the Frankfurt International Motor Show or maybe the biennial Paris Motor Show. If Japan was your primary market, you launched it at the Tokyo Motor Show, and if you were targeting us Americans, your choices were to roll it out in Detroit, Chicago, New York or Los Angeles. That old school wisdom just doesn’t fly anymore, and Volkswagen has some big plans for the launch of their next generation “21st Century Beetle”. Rather than launch at a single auto show, VW is relying on MTV to launch the car in Shanghai, China; Berlin, Germany and New York, all on April 18th.

The event kicks off in Shanghai with an exclusive MTV gala, then shifts to Berlin where Belgian duo 2manydjs will perform live at Berlin’s E-Werk space. Next up is New York, where The Black Eyed Peas will perform in honor of the car’s debut at the New Your Auto Show. The New York concert will be streamed live at www.WorldStage.MTV.com, although VW hasn’t told us when the show begins. If you’re a Black Eyed Peas fan in the UK, sorry – no live stream for you. You can, however, catch highlights from the New York and Berlin events online.

VW’s logic behind the near simultaneous launch is summed up by Luca de Meo, VW Group’s Director of Marketing:

“The Beetle is an icon of the automotive world, just like MTV is an icon of the music world. In the context of this marketing alliance, we are taking the new Volkswagen directly to customers and fans of the Volkswagen brand – and we are doing it globally. We are certain that the car’s one-of-a-kind styling combined with the latest technology will be very well received by customers.”

In other words, VW needs customers to perceive the Beetle remake as hip, something the previous generation Beetle lost through the years. Will VW’s marketing campaign prove to be genius or just expensive hype? I guess we’ll know in a few weeks.