Ever See An Escalade Beat A GT-R? 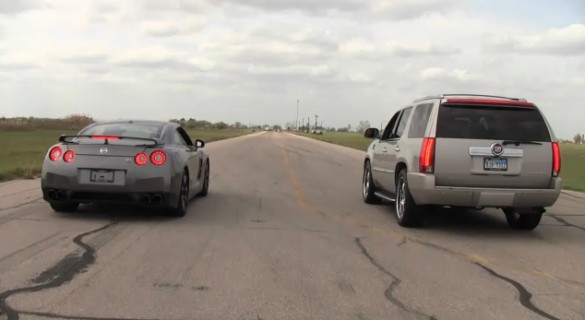 I’ll admit that these videos, from Hennessey Performance Engineering, are getting a little old. Every week it seems that HPE has a new and obscenely-tuned ride to pit against last year’s Nissan GT-R. At the current rate, I predict we’ll see a video pitting a 1975 Winnebago Chieftain motorhome, tuned by Hennessey, against the 2011 GT-R by the end of May. You know the Winnebago will smoke the GT-R, but they’ll probably have to use a rolling start. GT-R fans will pan this video, saying the Escalade left the line first, and that if Hennessey really wants to brag they should run the same test using the new and improved 2012 GT-R. That misses the point entirely, and Hennessey could have used any number of cars to run against the big Caddy SUV. Regardless of any staged drag race, if you’re not impressed by a 5,500 pound truck hitting sixty miles per hour in 3.3 seconds (faster than a stock Cadillac CTS-V), I’d encourage you to check your pulse. Video below.

Throw a couple corners into the mix, or make the contest from 0 to 100 mph and back to 0, and the GT-R would eat the Caddy’s lunch. I’ve always said that I’ve never driven a car that scares me, but anything the size of my first apartment that accelerates more violently than a Z06 Corvette has a damn good shot at it.