In the interest of full disclosure, I admit I am not a typical automotive journalist.  I don’t test new press fleet vehicles, don’t evaluate a new interior every week, and the majority of my knowledge comes from my own extensive research and a bit of real-world experience.  Call me an armchair journo, like I would imagine many enthusiasts to be.  I don’t often get to see the shiny new toys up close and personal, let alone get my hands on them.  Being naturally skeptical, I often wonder just how close to MY reality many car reviews are.

You see, at the end of the day I’m a working mom who happens to love cars, with issues of practicality to consider for my next vehicle.  I’m not yet at the point where I can pick what I WANT, but rather need to pick what best fits life’s demands at the moment.  Budget, space, and maintenance costs all trump the “fun to drive” factor even though I’d rather it be the other way around.  And so, I’ve often felt I will have to compromise on my next set of wheels.

A few weeks ago, my family and I returned to my husband’s shiny new (like, 800 miles on the odo new) Mazdaspeed3 in a parking garage to find that some jackwagon had scraped the back bumper as they reversed (we’re guessing).  The Mazda went into the shop and he was given a 2011 Elantra GLS as a rental.  I’ve been itching to test one out since seeing all the positive buzz, and have been waffling back and forth with putting the E on my shopping list.  One hundred and forty-eight horsepower sure does look puny next to the Speed3’s two hundred and sixty-three.  Unfortunately, the Speed3 doesn’t meet the “space” requirement as above, so it’s not a contender for me but I digress.

Coming from my own ride, a Mazda6, the Elantra looks petite and low to the ground.  The paint is beautiful, or would have been if the rental agency had slapped a decent coat of wax on the thing (this one was Phantom Black, but I have also seen the Indigo Blue Pearl in person and it’s outstanding).  Getting in, I noticed the seats were nicely bolstered and supportive and everything seemed to fit around me just right.  It had a weird “fossilized french fry” smell but I’ll chalk that up to rental car funk.  This was the base model with auto transmission and no other packages but still well-equipped.   I ended up driving it for its three-day tenure with us.  I had pretty low expectations – after all, this thing has less power than my ’03 base model 6 and is geared to achieve up to 40mpg on the highway. 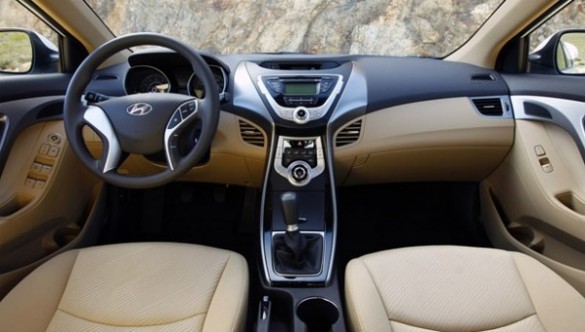 Consider my expectations surpassed, to say the least.  I often wonder if some automotive writers have become jaded over the years, after having driven so many wonderful machines.  What, I wondered, would someone in the “real world” think of it?  What’s it like in everyday driving, not on a closed track?  The first thing I noticed was the brakes were rather touchy and it didn’t take much gas to get the car to move.  I pulled into traffic expecting to floor it and was pleasantly greeted with a burst of speed.  The next thing was to take it on the highway where I had no trouble merging with those doing 80mph, and the E happily downshifted when I needed to pass some crawlers.

At this point, I was trying the sport-shift but it’s set up backward from the 6 – up to upshift, down to downshift.  Seems logical but not at all what I was used to.  Something else I wasn’t used to was two more gears than I normally have.  Slushbox or no, six speeds certainly helped make it more fun.  I took the curving off-ramp cautiously not knowing how the tires would respond but they held their own.  Not on-rails smooth like the Speed3 but definitely minimal body roll and I never felt out of control (the ESC may have been helping here…my 6 doesn’t have it and I’m not used to cars that do).

Inside, the base stereo provided plenty of enjoyment to my commute and I am curious how the 360-watt in the Limited sounds.  My inner geek was thrilled with the option of plugging in a USB stick for music.  The plastics were to my liking and I even pushed my finger into the dash – squishy – something I never would have even thought to do a few years ago before every car-related outlet started harping on it.  The backseat was spacious and accommodating for my family’s needs and the trunk, cavernous.  I was overjoyed to find how easily the Hyundai turned into parking spaces, although the very light steering at low speeds took some getting used to (sort of like the wheel in an arcade game).  That being said, it did weight up nicely at speed.  I am pretty sure the rental was out of alignment so my assessment of the suspension isn’t totally fair, but it did soak up the potholes of my daily trips easily.  I’m used to harsher setups, and going over railroad tracks in the Elantra actually felt better than in the 6. 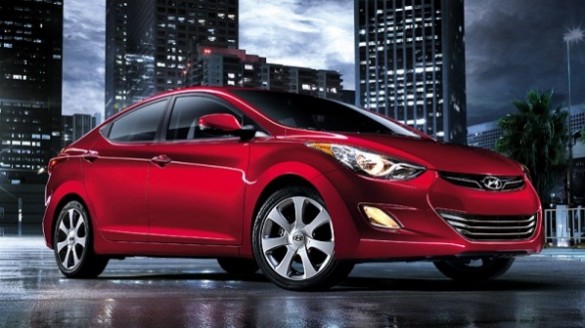 It doesn’t have the sweetest-sounding exhaust note and the horn elicits a polite “meep!” when pressed, but in the grand scheme of things those aren’t considerations I find important anyway.  HIDs are the only option missing from my wish list.  If I did buy one, it would likely be the Limited with nav (in Red Allure, please).  I understand it’s not an apples-to-apples comparison, but for me it has come down to the Elantra and the 2012 Civic Si.  I still plan to test an Si one day, of course, but I have been more than impressed with the E.  I figure it’s got to be a good car when you’re sad to turn in a base model rental that smells like old cooking oil, right?  If you’re looking for raw power and RWD then obviously this is not for you.  But if you’re looking to replace your old Civic or Corolla (or even “downsize” from a bigger car if you don’t need the space), want something for decent gas mileage, and see your car as something more than an appliance, I definitely recommend the new Elantra.   Now, if they would just throw a turbo in there, badge it an R-Spec, and sell it here I would be set for the next ten years.