If It’s Tuesday, This Must Be Daytona: One Lap of America 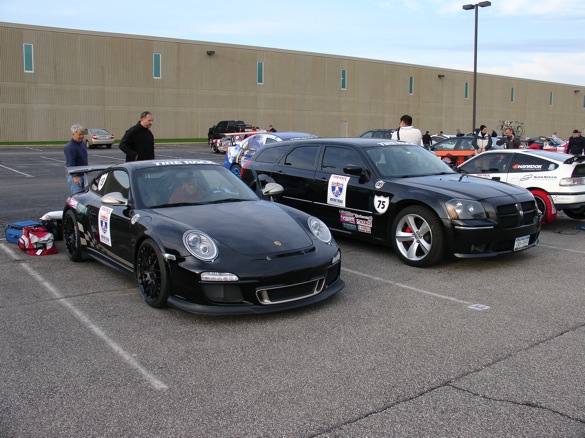 Team Angry and Team Slightly Annoyed prepare for the 2011 OLOA.

As far as I know, I wasn’t dropped on my head as a child. I can’t recall eating leaded paint, and I don’t think my mom let me play with a plastic bag over my head. Somehow, however, my developmental years took a wrong turn and I consider epic road trips to be fun. When a buddy called me up and offered me an expense-paid seat as a transit driver on this year’s One Lap of America, it didn’t take me long to say “sure”, even though it meant 10 days on the road, living on coffee, beef jerky and energy drinks. As a transit driver, I wouldn’t even get to compete in the bulk of the events, but it didn’t matter: I was still running away to join the circus.

One Lap of America is the evolution of the original Cannonball Baker Sea-To-Shining-Sea Memorial Trophy Dash, which was started by Brock Yates in 1971 to protest the 55 mile per hour speed limit. The original Cannonball event was blatantly illegal, since the whole point was to drive from New York to California as quickly as possible. By 1979, the Cannonball had attracted too much media attention and too many unqualified participants, so Yates pulled the plug after the ’79 run. In 1984, Yates began running an event dubbed, “One Lap of America”, in the spirit of the original Cannonball. Instead of focusing on public roads, One Lap left the competition for the racetracks, interspersed with grueling transit drives between tracks. The early OLOA events were the stuff of legend, with drivers racking up as much as 10,000 miles over 10 days.

This year’s event was, thankfully, much shorter. In eight days, we racked up around 3,700 miles and ran events at 10 different tracks. We drove 700 mile transit legs, through rain and rush hour traffic and drivers who really needed a good beating. We blatantly ignored speed limits and learned that a factory skunkworks Dodge Challenger SRT-8 will pull a Z06 Corvette and a Porsche 911 GT3 RS. We learned that Five Hour Energy works for 4 hours and 45 minutes (on me, anyway), and that you can function on four hours sleep for a lot longer than you think you can. Overall, we had fun, even if mechanical problems caused us to miss the last event.

Here’s my advice: bookmark the One Lap of America website, and start planning for the 2012 event. It isn’t inexpensive to run, but nothing worthwhile ever is. You’ll probably break your car, you’ll run yourself to the point of physical collapse and you’ll spend a week or so afterward in a catatonic daze. You’ll piss off your wife (or your husband), and you’ll stay in hotels with some “interesting” wall art. You’ll also meet some amazing people and drive some of this country’s best tracks, which makes all the suffering worthwhile. I’m still running on empty from the 2011 OLOA, but I know this: I’ll be back, in my own car, for the 2012 event.

Events One Lap of America Races