Ford Focused On Safety And Technology 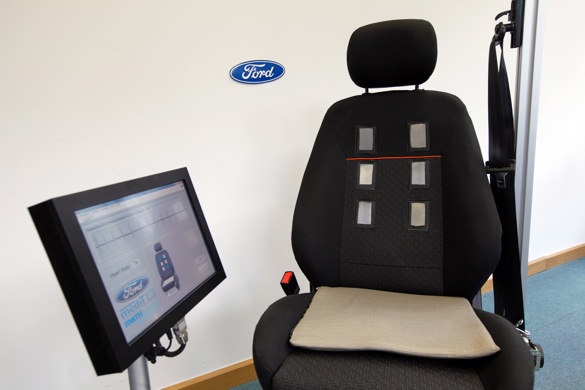 A seat that monitors you heart rate? Ford's working on it. Image: Ford Motor Company

If you haven’t shopped for a new car in the last five years and you’re about to check out Ford’s latest offerings, be prepared to be surprised. A lot has changed over a short period of time, and today’s cars are coming with a dizzying array of new technology and safety systems, all designed to make driving more enjoyable while minimizing its risks. Excluding luxury brands such as Mercedes and BMW, no other automaker is putting as much effort into developing new safety and technology integration systems as Ford, and they recently hosted a group of journalist in their Dearborn, MI headquarters to show us what’s new. Below are the highlights of Fords current efforts, some of which are available today while others are still works in progress. One thing is clear: in-car technology is evolving at a staggering pace, so the cars of 2016 are likely to be filled with technology we can’t even imagine today.

MyFord Key – Ford developed the technology for its MyFord Key system a few years back, but it’s been enhanced for the upcoming model year. Essentially a “parental control” for the family car, MyFord Key allows owners to set speed limits, audio volume limits, speed warnings and to disable the audio system if the driver isn’t wearing a seat belt. As deployed today, MyFord Key allows a maximum speed limit setting of 80 miles per hour; upcoming is a choice of three maximum speed limits (80, 70 and 65, corresponding with state speed limits) and a feature that will block adult content on satellite radio.

AppLink – Used today on the Fiesta, AppLink allows owners to listen to tweets (via OpenBeak), stream Pandora or stream RSS feeds through Stitcher. Next year, AppLink will expand to the Ford Fusion, Fusion Hybrid, F-150, Raptor, Super-Duty, Expedition, E-Series, Shelby GT 500 and Mustang, and Ford is quadrupling the size of its Connected Services Solutions group over the next four years. Look for new apps to be added in the near future as well.

Improved Voice Recognition – Ford is working with Nuance to improve the voice recognition of the Ford SYNC system. Rather than requiring users to speak commands in an awkward, hierarchical manner, Nuance is working on systems that understand the intent of what a driver wants. The goal is to make voice recognition systems easier to operate, especially for first time users or those less technically adept. SYNC can now understand 100 times the number of commands it could when launched back in 2007, and you can probably expect similar gains over the next four years. Talking cars really aren’t that far off, after all.

Bold Fonts – Ford is taking steps to help drivers read interface screens by making fonts bolder and thicker. Look for this to appear first on the Ford Edge and Ford Explorer, beginning in 2012.

Health and Wellness Monitoring – still in the R&D stages, Ford is developing technology to interface with Bluetooth enabled medical devices, such as embedded glucose monitors. This would allow diabetic drivers to track blood glucose levels in real time, alerting them before a problem arose. Ford is also working with Pollen.com to provide real time air quality monitoring for patients with respiratory problems; in the future, air quality alerts could even re-route drivers to prevent potential health issues.

Intelligent Vehicles – Ford is working on systems that allow cars to “speak” to one another, or to communicate with intersections equipped with intelligent traffic signals. Distracted drivers would receive an alarm if they were approaching a red light at an improper rate of speed, and cars would receive a similar alarm if an oncoming vehicle posed a collision risk (passing a truck on a two-lane road, or turning left across traffic, for example). Still a few years off, this technology has the potential of reducing passenger vehicle crash risks by 81 percent when fully deployed.

Technology extends to fuel economy as well, and Ford currently offers more vehicles with 40 mpg fuel economy than any other manufacturer. Thanks to developments like EcoBoost, smaller, more fuel-efficient engines are able to produce significantly more power than in years past, and even truck buyers are seeing the advantages of this. In May, 55 percent of F-150s sold came equipped with Ford’s EcoBoost V-6, marking the first time that V-6 F-150s outsold V-8 versions.

We may not know exactly what the future has in store for the automotive industry, but this much is clear: if you can imagine it, chances are good that Ford has someone working on it.