A Mugen-Tuned Ariel Atom Versus… A Tuned Honda CRZ? 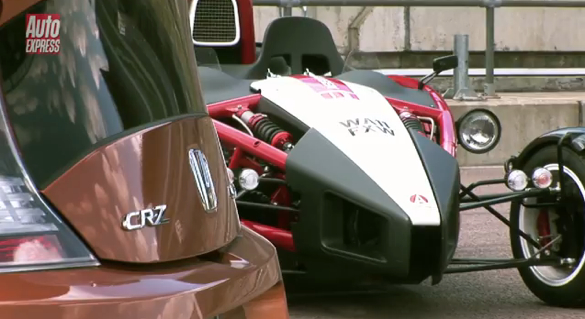 Car shows like putting together eclectic comparisons. Take Top Gear for example, who once compared a Mitsubishi Evo against a main battle tank, and routinely pits sports cars against extreme sport athletes. Still, I’m not sure any comparison I’ve seen to date is as odd as the one in the Auto Express video below, which compares a Mugen-tuned Ariel Atom to a Mugen-tuned Honda CR-Z. In fairness, they’re not running the cars side-by-side on a track, nor are they using both for a rush-hour commute. Still, comparing the Atom to the CR-Z is akin to comparing an ax to a crate of dynamite: both will take down a tree, but in very, very different fashion.

The Atom remains one of the world’s premier track-day terrors, but Auto Express shows clearly that you don’t need to trailer it to and from track days (assuming you don’t suffer from kidney stones, that is). The Mugen CR-Z is much more entertaining with a supercharger to boost output to 200 horsepower, yet it still returns up to 40 mpg if driven carefully. Perhaps that’s the most shocking part about the video: in the not-too-distant future, there will be hybrids that enthusiasts can actually learn to love.