Is Dodge Resurrecting The Magnum? 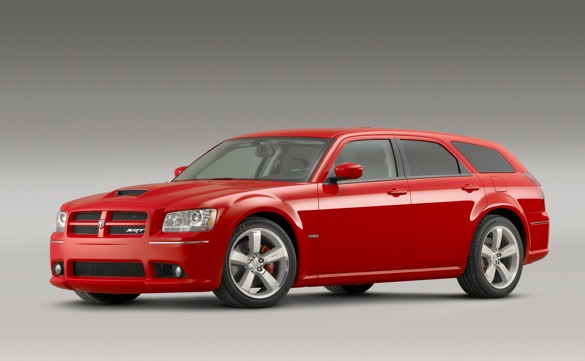 Call me biased, but the Dodge Magnum SRT8 was one of the coolest vehicles to ever roll off an assembly line. Whatever evil genius came up with the idea to stuff the biggest Hemi V-8 in Dodge’s inventory into a chopped and stylized station wagon deserves props, because the Dodge Magnum SRT8 may be the most versatile enthusiast ride on the planet. It looks cool, it goes like stink and it’s happy to run the interstate all day long at triple digits if you care to do so. It’s part muscle wagon and part GT car, and there’s a good chance that the entire Magnum family may be heading back into production.

Ralph Gilles, head of the SRT group at Chrysler, recently told the New York Times that killing the Magnum off was the decision of a single executive, now retired. Back in Chrysler’s pre-bankruptcy days, such a move probably made sense. The Magnum wasn’t delivering the sales that the company expected, and they were no longer in a position to keep an unprofitable vehicle in the product mix. After a five year production run, the Magnum was axed after the 2008 model year.

A lot of people within Chrysler still love the Magnum, and there are no other full size station wagons currently in production. If offered in AWD, it would even appeal to customers in snow-belt states, and it may well prove to be an attractive alternative to SUVs and crossovers. An SRT8 version would now carry a 6.4 liter Hemi V-8, which puts out 470 horsepower and 470 foot-pounds of torque under the hood of the new Charger SRT8. That’s a bump of 45 horsepower over the previous generation Magnum SRT8, and I’m guessing that a second generation Magnum would tip the scales a few hundred pounds lighter than first generation cars.

I hope Gilles is right, because America needs cars like the Magnum. Station wagons make sense on so many levels, and the Magnum was always a personal favorite. Stay tuned for further details as Dodge hammers out their upcoming product plans.