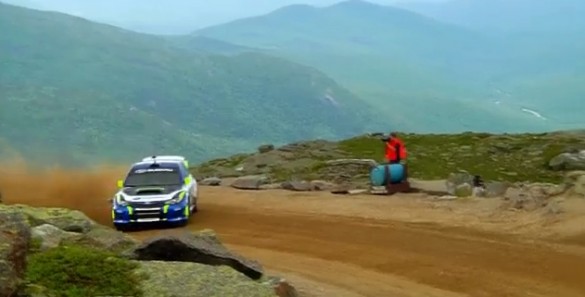 Mount Washington’s Climb to the Clouds sounds simple enough: a solo driver, in a purpose-built race car, crosses a starting beam and then tries to produce the fastest time up the mountain. Along the way, he’ll likely encounter wet pavement, dry pavement, loose gravel, clouds, fog, and wind. He’ll also encounter the kind of sheer drop-offs that ensure making a mistake is a one-time thing. There are no guard rails, there are no corner workers and there are no safety nets.

This year marks the first official running of the Climb to the Clouds in a decade, and the official time to beat was 6:41.99 seconds, set by Frank Sprongl in 1998. Travis Pastrana did an exhibition run up the mountain in 6:20.47 last year, but the time didn’t count since it wasn’t recorded during a sanctioned event. Pro rally driver David Higgins clearly had his work cut out for him, and his goal was to beat both the “official” time and Pastrana’s unofficial record pace. In the end, Higgins crossed the line in 6:11.54, beating Pastrana’s time by nearly nine seconds and shaving over 30 seconds off the record. His 2011 run, in the video below, is epic enough, but the driver has set a new goal for next year: weather conditions permitting, Higgins wants to run a sub-6:00 time.